Pterospermum acerifolium plant is considered to be laxative, anthelmintic, stomachic and used in inflammation, blood disorders, ulcers and leprosy. The leaf was studied for pharmaconostic evaluations, including examination of morphological and microscopic characters, determination of leaf constants, ash values and extractive values. The morphological studies revealed that the leaf is dark green color with a glabrescent texture and characteristic odour. In the microscopic studies, the leaves showed the presence of long, lignified stellate and four armed trichomes, anomocytic and paracytic stomata, 2 layers of radially elongated palisade cells below upper epidermis, collenchyma, vascular bundles and spongy parenchyma. The total ash, acid insoluble ash and water-soluble ash values were observed to be 4%, 1.4% and 2.5% respectively. The leaves were successively extracted with Petroleum ether, chloroform, ethyl acetate, methanol and water in increasing order of polarity. Preliminary phytochemical investigation showed the presence of alkaloids, glycosides, tannins, triterpenoids, carbohydrates and flavonoids.

INTRODUCTION: Pterospermum acerifolium (L) Willd (Family: Sterculiaceae) commonly known as “Dinner plate tree” (English) and “Muchukunda” (Hindi), is a large deciduous tree of about 24 m height and 2.5m girth. Flowers are large 12-15 cm in diameter, axcillary, solitary or in pairs. It is widely distributed in North Canada and in many parts India i.e. river banks of sub-Himalayan tracts, Dehradun, West Bengal, Assam and Manipur 1-2. In traditional system of medicine, the flowers are used as a general tonic, anti tumor agent, analgesic and for the treatment of diabetes, gastrointestinal disorders, leprosy, blood troubles, bronchitis, cough, cephalic pain, migraine and inflammation. The leaves are used as haemostatic and antimicrobial agent 3-6. The main aim of the present investigation is to study the macro, microscopic and some other pharmacognostic characters and physicochemical standards of leaves of Pterospermum acerifolium which could be used to prepare a monograph for the proper identification of the plant.

MATERIALS AND METHODS: Samples of leaves of Pterospermum acerifolium were collected from Nasik district of Maharashtra and authenticated at Botanical Survey of India, Pune, where a sample (voucher number- RASPTA1) has been deposited.

Qualitative Investigation: The macroscopic features of the fresh leaves of Pterospermum acerifolium were determined using the method of Evans 7. Anatomical sections and powdered samples for the microscopy and chemo-microscopy were carried out according to methods outlined by Brain and Turner 8.

Quantitative Investigation: The moisture content, ash and extractive values of the powdered leaves samples and the quantitative microscopy on the anatomical section were carried out as described in the Indian Pharmacopoeia 8 and Khandelwal 9.

Transverse section of lamina: Leaf is dorsiventral. Transverse section of lamina shows single layered epidermis. It is composed of rectangular, barrel shaped cells. The mesophyll is differentiated into palisade and spongy tissue. The palisade is two layered and spongy tissue is of loosely arranged cells. Spongy mesophyll is 2-3 layered. It is followed by single layered, rectangular lower epidermal cells (Figure 4). Lower epidermis shows the presence of an anomocytic and paracytic stomata (Figure 5, 6). Powder characters showed presence of vessel, stellate and four armed trichomes. 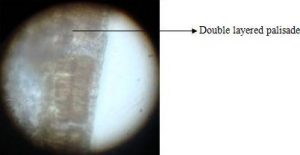 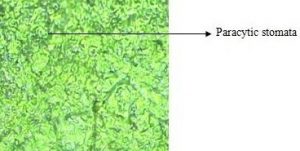 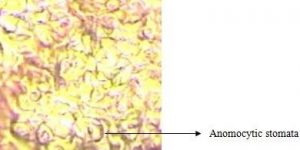 Quantitative microscope: The leaf microscopic characters like stomatal number, stomatal index, vein islet number and vein termination number were determined (Table 1). The quantitative determination of some pharmacognostic parameters is useful for setting standards for crude drugs. The vein islet, stomatal number and stomatal index parameters determined in the quantitative microscopy, are relatively constant for plants and can be used to differentiate closely related species.

TABLE 1: QUANTITATIVE MICROSCOPY OF THE LEAVES OF P. ACERIFOLIUM

TABLE 2: PHYSICO-CHEMICAL CHARACTERS OF THE POWDERED LEAVES OF P. ACERIFOLIUM

The quantitative determinations of some pharmacognostic parameters are useful for setting standards for crude drugs. The physical constant evaluation is an important parameter in detecting adulteration or improper handling of the drug. Various ash values are important to determine purity of the drug i.e the presence or absence of foreign inorganic matter. Since the plant Pterospermum acerifolium is useful in the traditional medicine for the treatment of some ailment, it is important to standardize it for use as a drug. The pharmacognostic constants for the leaves of this plant, the diagnostic microscopic features and the numerical standards reported in this work could be useful for the compilation of a suitable monograph for its proper identification.