PHARMACOGNOSTIC CHARACTERIZATION OF THE LEAVES OF STEVIA REBAUDIANA BERT

PHARMACOGNOSTIC CHARACTERIZATION OF THE LEAVES OF STEVIA REBAUDIANA BERT

Mitra * and A. Pandey

INTRODUCTION: Stevia rebaudiana Bert. is a perennial shrub of Asteraceae family, native to tropical and subtropical regions of North America and South America. It is commonly known as Sugar leaf, Sweetleaf or simply Stevia. Apart from these regions, the plant is also extensively cultivated in countries like Japan and India. The plant, though in use for the last few hundred years by the natives of Peru, has gained immense recognition recently due to its use as a natural sweetener

The genus Stevia consists of 240 species of plants native to South America, Central America, and Mexico, with several species found as far north as Arizona, New Mexico, and Texas. They were first researched by Spanish botanist and physician Petrus Jacobus Stevus, from whose surname originates the Latinized word Stevia. The leaves of Stevia are 30-45 times sweeter than sucrose. The leaves can be eaten fresh or put into various health drinks or foods. The plant was used extensively by Guarani people for more than 1500 years, and the plant has a long history of medicinal use in Paraguay and Brazil to sweeten local teas, medicines, and a “sweet treat”.

Stevia can be used as an anti-obesity, anti-diabetic, antihypertensive drug, and also in heartburn. It is also proved helpful in lowering uric acid levels, preventing pregnancy, and increasing muscle contraction strength that pumps blood from heart.

In foods, Stevia is used as a non-caloric sweetener and flavor enhancer. Stevia was originally available as a “dietary supplement” in the U.S. It was not allowed as a “food additive” until 2008. Stevia is also available as a sweetener in countries like Japan, South Korea, Malaysia, Taiwan, Russia, Israel, Mexico, Paraguay, Uruguay, Venezuela, Brazil, Colombia, and Argentina 2, 3.

Collection and Authentication of the Plant: The plants were collected from the medicinal plant garden of Birla Institute of Technology, Mesra, Ranchi, Jharkhand, from July to November 2013. The plant was authenticated by Central National Herbarium, Botanical Survey of India, Kolkata, West Bengal. A specimen voucher has been deposited (CNH/23/2014/TechII/63). The plant was also identified by Prof. (Dr.) S. Jha, Dept. of Pharmaceutical Sciences, BIT, Mesra.

Transverse Section of the Leaves: 6, 7 For preparing thin transverse sections of the leaves, mature leaves were collected and washed with water. Thin sections of the leaves were cut from the middle portion of the lamina and kept in water, so that they retain moisture. Staining agents like Safranin, Phloroglucinol, and dil. HCl were used. Microphotographs were taken using Leica DME, DSC Power shot S70 DE [PICT Bridge], 7.1 megapixels, wide-angle 3.6X optical zoom lens.

Powder Microscopy 8, 9: Leaves of the plant were dried in the shade and passed through a sieve no. 180 and a sieve no. 125, separately, to obtain fine powder and then subjected for powder microscopy. A judicious amount of the powder was taken on a glass slide, and a few drops of chloral hydrate were added. The slide was then heated for a few seconds carefully to avoid drying of chloral hydrate. A coverslip was placed over the slide carefully to avoid air bubbles. An extra amount of chloral hydrate was removed using blotting paper. Lignified tissues were confirmed by staining with phloroglucinol and conc. HCl. On a different slide, a mixture of phloroglucinol and conc. HCl in the ratio 1:1 was added and observed under a microscope.

Leaf Constants: Fresh leaves were collected, washed and small rectangular portions were cut from the middle region of the lamina. The small cut pieces were put in a test tube, and a small amount of Choral hydrate was added. Then the test tube was heated so that the components of it are boiled. The treatment with Choral hydrate helps in removing the chlorophyll.

Macroscopic and Organoleptic Parameters: The detailed morphological and other organoleptic parameters are reported in Table 1.

The leaves are arranged in an opposite decussate pattern. The leaves are 2-3 cm in length and are oval-elliptical in shape. The margin is serrate with reticulate venation.

The transverse section of the leaves is cut from the midrib, and it has shown various characteristics. There are two types of trichomes present in the leaves, glandular and tector. The transverse section also reveals the presence of two different types of tector trichomes. One of them is slightly longer with the elongated ending and is 8-10 celled, while the other one is relatively shorter and thinner. The longer trichome seems to be conical uniseriate, while the shorter one is thinner and is comprised of 3-6 cells. The transverse section also reveals anomocytic or Ranunculaceous or irregular called stomata at the abaxial surface, while occurrences of the stomata are scarce in the adaxial surface. Both upper and lower epidermis is thinner, and the mesophyll is comprised of palisade and spongy parenchyma. 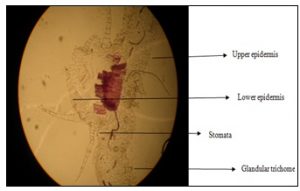 FIG. 1: TS OF THE LEAVES OF STEVIA REBAUDIANA 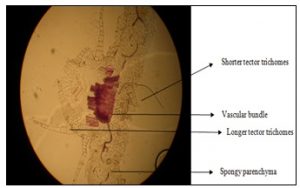 FIG. 2: TS OF THE LEAVES OF STEVIA REBAUDIANA

Powder Microscopy: Powder microscopy of the leaves of Stevia rebaudiana has shown various diagnostic characteristics of leaves. The microscopy has revealed the presence of glandular trichomes, tector trichomes, hair on the epidermal surface, xylem vessels with annular, scalariform, and spiral thickening. There are two types of non-glandular or tector trichomes present in the epidermal layer. The longer tector trichomes are conical, erect, uniseriate, and are composed of 8 to 10 cells, whereas the shorter ones are thinner, uniseriate, and are composed of 3 to 6 cells. The characteristics of the leaves have been reported in Fig. 3, Fig. 4, and Fig. 5. 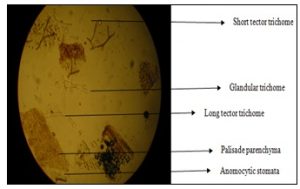 FIG. 3: POWDER MICROSCOPY OF THE LEAVES OF STEVIA REBAUDIANA 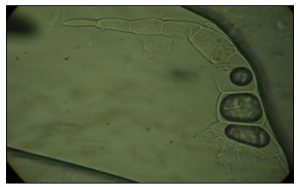 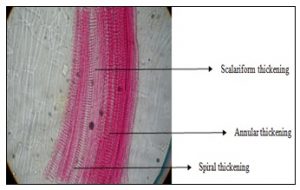 Leaf Constants: Leaf constants are important parameters for the quantitative analysis of a leaf. They include parameters like the Stomatal index, Stomatal number, Palisade ratio, Vein islet, and Vein termination number. These parameters help in quantification of crude drugs when they are leaves. The findings are reported in the following table. Vein islet number of the leaves was found to be between 4-7, and the Vein termination number was reported to be between 3-7.

TABLE 2: LEAF CONSTANTS FOR THE LEAVES OF STEVIA REBAUDIANA

TABLE 3: PHYSICOCHEMICAL CHARACTERS OF THE LEAVES OF STEVIA REBAUDIANA

Physicochemical Analysis of the Leaves: Physicochemical parameters such as moisture content (Loss on drying), Total ash value, acid insoluble ash value, water-soluble ash value and extractive value were determined. Ash value of a crude drug helps in determining the impurities such as earthy contaminants of a drug. The moisture content of a drug is a measurement of the amount of free water present in a drug, whereas the extractive value of a drug is useful in finding adulterants present in the crude drug. The findings are reported in the following table.

CONCLUSION: This study is carried out to lay down various pharmacognostic standards for the leaves of Stevia rebaudiana. There is no thorough pharmacognostic record of the leaves of such an important plant and this study was done in hope to be able to lay down few standards. The leaves have shown to be sweet in taste, have serrate margin and oval-elliptical shape. The microscopy of the leaves has shown various diagnostic characters like tector trichomes, glandular trichomes, and Ranunculaceous stomata. The powder microscopy has revealed two types of tector trichomes and xylem vessels with different thickening. This study is in the hope of laying a foundation to further studies regarding its complete chemical profiling.

ACKNOWLEDGEMENT: The authors would like to take this opportunity to acknowledge the continuous support and guidance from the esteemed faculty members Dept. of Pharmaceutical Science and Technology, Birla Institute of Technology, Mesra, Ranchi. The authors would also like to thank the Central National Herbarium, Botanical Survey of India, Kolkata, for their assistance in authenticating the plant.

DECLARATION OF INTEREST: The authors declare no conflict of interest.