INTRODUCTION: Chonemorpha. grandiflora (Roth) M.R. and S. M. Almeida syn. C. fragrans syn. C. macrophylla is a medicinal plant 1, 2 used in Indian medicinal systems. Entire plant, roots and the root bark are used for fever and stomach disorders. The trade is mainly confined to Kerala state under the name Perumkurumba and the dried roots are sold commercially 3. In Mizoram,  the plant is used for treatment of gynaecological disorders 4 . C. grandiflora, has been included in the list of threatened medicinal plants 5. It is known to possess muscle relaxant and antiparasitic properties 6, 7. Phytochemical analysis of C. grandiflora has revealed the presence of steroidal alkaloids, like chonemorphine and funtumafrine 8, 9. Camptothecin, a well known anticancer compound has been reported by us from the ethanolic extracts of the stem bark of C. grandiflora collected from Kerala state and also in the callus cultures of C. grandiflora 10. So far, there are no reports on antimicrobial activity and there are scanty reports on secondary metabolite production in vivo and in vitro for this plant.  Therefore, C. grandiflora   was selected for the present investigations.

Collection of Plant Material: The plant material of Chonemorpha grandiflora was procured from Dandeli, Uttar Kannada district, Karnataka state, India. The plants were identified and deposited at Botanical Survey of India, Western circle, Pune, India. The stem with stem bark and leaves were separated and shade dried at room temperature to constant moisture content. The dried plant material was powdered and stored in plastic bottles till further use.

In vitro Studies: Nodal sectors of C. grandiflora were grown on Murashige and Skoog’s medium( MS medium) 11 supplemented with 8.8 µM BAP to obtain in vitro shoots. Leaf explants were grown on MS medium supplemented with 4.52 µM 2, 4- D to establish callus. In vitro plantlets and leaf callus were dried, powdered and used for preparation of extracts for phytochemical analysis and studies on antimicrobial activity.

Preparation of Extracts: Cold extraction was carried out  at room temperature for 48 hours by adding 50 g of powdered material  to 250 ml ethanol. The extracts were filtered and centrifuged at 9000 g for five min. The clear supernatant obtained was passed through the membrane filter (cellulose-nitrate, 0.20 µm, Pall Gelman). The extracts were evaporated to dryness to get the residue. The weight of the residue was recorded to obtain percent extractive values.

For detection of alkaloids, FCPA reagent (3 % FeCl3 in 35 % HClO4) was used. The plates were heated in an oven till colors developed.  Rf and colour of the spots were recorded.

HPLC  Analysis: HPLC analysis of the ethanolic extracts of C.  grandiflora  was carried out as described in our earlier report 10. Isocratic analytical HPLC was carried out using RPC18 column (Perkin Elmer, series 200, Switzerland, SPHERI-5, 5 mm, 250 × 4.6 mm). The mobile phase for alkaloid elution was acetonitrile : water (40:60), at a flow rate 1.6 mL/min with a sample size of 20 μL  and UV detection at 254 nm. A standard curve was obtained using authentic sample of camptothecin (Sigma Aldrich). The standard was prepared using DMSO: methanol (1:50 v/v).

HPLC analysis of standard as well as extract yielded chromatogram with retention time of 3.75 min. Co-chromatography of the extracts was performed with authentic samples for confirmation. Validation of quantitative method was performed for samples in 5 replications. The results from the samples at two concentrations did not alter the retention time. The retention time proved that accuracy and reproducibility was excellent.

Antibacterial Activity: Antibacterial activity of ethanolic extracts of C.  grandiflora,  was tested against Bacillus subtilis (ATCC 6633) Salmonella typhae and Klebsiella pneumonae, procured from NCIM, NCL, Pune and Department of Biotechnology, Sinhagad College, Pune. Ethanolic extracts of stem with bark and leaf callus, were prepared by adding ethanol to the residues, to get the concentration 250 ppm and 500 ppm respectively. Nutrient agar medium was prepared. Bacterial cultures were inoculated into nutrient broth and incubated at 35±2°C.

After 24 hours, the bacterial suspension was centrifuged at 6000 rpm for 15 min. The pellet was suspended in sterile distilled water and the transmittance of suspension was corresponding to 70-80% at 530 nm   and a constant number 10 6 cells/ml. 0.1 ml of suspension was spread on the plates. The wells were prepared by using 0.6 mm borer and 5 wells were prepared in each petridish. 75µl of extract was loaded in each well. The solvent ethanol was kept as a negative control and the standard antibiotic Cephotaxime (250 and 500 ppm respectively) was used as a positive control.  3 replicates were kept for each set of experiment and each set was repeated twice. Inhibition zone was recorded in mm after 24 hours. 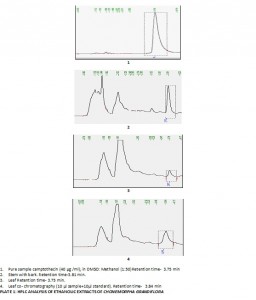 *mean of 3 replicates; -- No inhibition zone

DISCUSSION: Camptothecins are one of the most important anticancer alkaloids of the 21st century because of their clinical applications against cancer 13, HIV 14, Leishmania 15 and plasmodium falciparum 16.

Camptothecin is known to occur in different unrelated genera, including Camptotheca acuminata, Nothapodytes nimmoniana, Tabernaemontana heyneana 17. It has been recently reported in Ophiorrhiza rugosa var. prostrata 18 and in C. grandiflora 10. As the demand of camptothecin is very high and supply is short, there is urgent need of finding an alternative plant source of camptothecin. So phytochemical investigations on C. grandiflora from different localities is needed. This could help in finding the elite plants for production of camptothecin.

The antibacterial activity of stem with bark extracts of C. grandiflora may be assigned to the secondary metabolites i.e., alkaloids, steroids and tannins present in the bark. The results obtained also are supported by our phytochemical investigations which have shown higher percentage of alkaloids in the bark as compared to callus.  Callus showed comparable activity with that of stem bark extracts, though percentage of total alkaloids recorded in it was less. This may be due to the presence of other metabolites in callus or undifferentiated nature of callus. Further phytochemical investigations on callus are needed.

ACKNOWGEDGEMENTS: The first author (AVK) is thankful to UGC, The Professor and Head, Department of Botany, University of Pune, Principal of S.P. College, for awarding teacher fellowship. Thanks are due to Mr. Shiddapur S.G. for assistance in collection of plants and Priyanka Baradkar in testing antibacterial activity.