Cissus quadrangularis L. (Vitaceae) is a common perennial climber also called Asthisamhara meaning bone setter is prescribed both in Ayurveda as well as Unani systems for its medicinal use. Pharmacognostic evaluation of Cissus quadrangularis stem revealed a stomatal index of 151 with Stephanocytic stomata in the epidermal peeling. The anatomical section of the stem showed deposits of characteristic acicular or needle shaped calcium oxalate crystals, raphides and intrafasicular cambium. The histochemical studies showed the presence of alkaloids, tannins, phenols and suberin. The phytochemical analysis of aqueous, petroleum ether and dichloromethane extracts were positive for alkaloids, phenol, steroids, flavanoids in all the extracts. The presence of sclerides, fiber sclerides epidermal cells, phloem with companion cells, ray fibers with pits, raphides, acicular and sand crystals of calcium oxalate were evident in powder analysis. Under 365nm UV green fluorescent emission was observed in acetic acid and methanol treated stem powder.

INTRODUCTION:Plants are known to be the source of many chemical compounds. Medicinal plants were used by people of ancient cultures without knowledge of their active ingredients. The common practice of taking crude extract orally is laden with hazards as the extracts may contain some toxic constituents 1.

Plants produce a diverse range of bioactive molecules making them a rich source of different types of medicines. Higher plants as sources of medicinal compounds have continued to play a dominant role in the maintenance of human health care since ancient times.

Over 50% of all modern clinical drugs are of natural origin and natural products play a vital role in modern drug development in the pharmaceutical industry 2.

Cissus quadrangularis L. (Vitaceae) is a common perennial climber, which is distributed throughout India particularly in tropical regions. It is one of the most frequently used indigenous medicinal plants in India. It is commonly known as Hadjod, Asthisamhara, Harjora, Vedhari, Hadbhanga, Vajravalli in Sanskrit, Kandvel in Marathi, Haddjor in Punjabi, Hadbhanga in Oria, Vedhari in Gujrati, Perandai in Tamil, Nalleru in Telugu and Veldgrap in Indian languages and in English it is called as Edible-stemmed Vine. It is also known as Vitis quadrangularis.

It is prescribed both in Ayurveda as well as Unani systems for its medicinal use as an alternative, anthelmintic, anti-inflammatory, dyspeptic, digestive, tonic, analgesic in eye and ear diseases, and in the treatment of irregular menstruation. It is very useful in asthma, fractures and back pain.

The plant extracts also exhibit cardiotonic property 3. The plant is reported to have antibacterial and antioxidant activities. The whole plant is used in oral re-hydration, while the leaf, stem, and root extracts of this plant are important in the management of various ailments. The antiosteoporotic activity of C. quadrangularis maybe justifiably is attributed to the steroids present which probably act as phytoestrogens to effectively prevent or reduce bone loss 4.

In addition, ulcer protection was confirmed by histo-architecture, which was comprised of reduced size of ulcer crater and restoration of mucosal epithelium 5 produced significant immunomodulatory effect, anti-oxidant activity along with the ability to modulate, synthesis and upregulation of the growth factors 6.Besides these effects, C. quadrangularis also possesses analgesic effect, which can be very useful in painful hemorrhoid.

The aqueous extract of C. quadrangularis was reported to have anticonvulsant and sedative property 7. Some other reports on justifies its effectiveness in management of obesity and complications associated with metabolic disorders 8 its antioxidant and free radical scavenging activity “in vitro” 9, 10. In current scenario formulations now contain extracts of C. quadrangularis in combination with other active ingredients, used for the purpose of management of overweight and obesity, as well as complications resulting from these conditions, specifically metabolic syndrome (syndrome X).

A key obstacles which has hindered the acceptance of the alternative medicines in the developing countries, is the lack of documentation and stringent quality control. There is a need to standardize and pharmacognostic studies will help in maintaining quality and reduced toxicity. Hence, Pharmacognostic studied on Cissus quadrangularis stem is reported in this article.

Microscopic Characters: For microscopic studies, the leaves were cut and removed from the plant and fixed in FAA (formalin 5ml + acetic acid 5ml + 7.0% ethanol 90ml). After 24 hours of fixation, the epidermal peels and transverse sections of leaf was taken by free hand.

The section were stained in safrain (1%) and mounted in glycerol.

Quantitative Microscopy: The total number of stomata was calculated by stomatal index = No. of stomata x 100/ total no. of epidermal. The type of the stomata was recorded in the epidermal peeling. The quantitative microscopy was studies as per the procedure given by 11, 12.

Anatomical Study: Free hand section of Stem of Cissus quadrangularis were taken, stained with Safranin and mounted in glycerol and observed under light microscope and photographed at 40x.

Maceration: The stems of Cissus quadrangularis were cut into small piece, boiled repeatedly in water to expel air, till the pieces settled down.  Treated pieces of the plants was soaked in jeffery’s fluid (equal volume of 10% of nitric acid and 10 % chromic acid) for 24 hours at 30-40c, decanted washed and then  stored in 50% alcohol.

Histochemical Test: The plant section were treated with various reagent such as Wagners reagent (Potassium iodide and Iodine) for detection of alkaloid, Toludine blue 0 for lignin, ferric chloride in IN Hydrochloric acid for Tannin, Sulphuric acid for  calcium oxalate Crystals , methylene blue for  phenols.

Phytochemical Screening: The stem of Cissus quadrangularis   was washed thoroughly, blotted dry and completely air dried. The dried powder was extracted with aqueous, petroleum ether and Dichloromethane. Chemical tests for various extracts were carried out according to the standard procedures described by 13, 14.

Powder Analysis: The dried stem was powdered and sieved to obtain coarse powder. The powder thus obtained was placed on to a clean slide and observed under microscope.

Fluorescence Analysis: The dried stem powder was placed on a slide and treating with several drops of specified reagent like Hydrochloric acid, Sodium hydroxide, Nitric acid, Sulphuric acid, Ferric chloride, Iodine Acetic acid, HNO3 + Ammonia, Methanol, NaOH + Methanol. The slides were observed under UV 265 nm and 365 nm and the emitted fluorescence was observed that helps in identifying the drug in powdered sample. Fluorescence analysis has been carried out according to the method of Kokoshi et al 15. 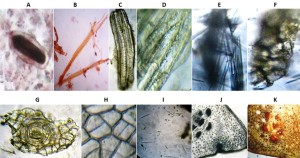 Phytochemical Screening: In Cissus quadrangularis alkaloids, phenol, steroids, flavonoids were present and other phytochemicals were absent. The presence of phytosterol, flavonoids, tannin, gum, mucilage, saponin and phenolic compounds were reported, however in the present study, since the material chosen for pharmacognostic analysis was a young stem some of the reported phytochemical were absent, however flavonoids, steroids, alkaloids, mucilage, phenol were present in the young stem as well. The active constituents like phytosterol and flavonoids were responsible for pharmacognostic activity (Table 1).

The presence of flavonoids, saponin, phytosterol, saponin and flavonoids in ethyl acetate was reported. In the presence study, flavonoids were present in petroleum ether extract.

The moisture percentage of Cissis quadrangularis powder was 4%, the acid in soluble ash and water soluble ash were 53% and 51.06% respectively. The total ash content was 62% (Table 3).

According to WHO 80 % of the population in developing countries are dependent on herbal medicine forhealth care programs. Standardization and purification of these herbal drugs become inevitable.

Documentation of such herbal plants is vital and an initial step towards authentication of the drug.  The present pharmacognostic studies on Trigonella foenum graecum will be of great importance in standardization of herbal preparations.

ACKNOWLEDGEMENT: The authors wish to thank the Head of the Department and The Principal, Ethiraj College for Women, for their constant support and encouragement.