PHARMACOGNOSTIC EVALUATION OF THE LEAF OF ANTIARIS TOXICARIA (FAMILY: MORACEAE)

PHARMACOGNOSTIC EVALUATION OF THE LEAF OF ANTIARIS TOXICARIA (FAMILY: MORACEAE)

ABSTRACT: Background:  Antiaris toxicaria is a tree in the mulberry and fig family of Moraceae. The leaf is used to remedy various ailments but the preparation depends on individuals. There is a need to set a standard for its preparation that would ensure optimum therapeutic benefits. Medicinal plants are generally reputed as cheaper and safer alternatives to synthetic drugs but these are often adulterated with inferior materials thereby affecting the overall therapeutic advantage. Pharmacognostic studies on such medicinal plants are therefore necessary to set standards for the preparation of herbals. Materials and Methods: Macroscopic and microscopic studies, including anatomical sectioning, chemo-microscopic, fluorescent analysis, and numerical and quantitative leaf microscopy were evaluated according to standard and reported method. Results: The leaf is simple, lanceolate or oblong, alternate, with reticulate venation, acute apex and cuneate base. Types of calcium oxalate crystals found were rosettes and prisms. Stomata are anomocytic with epidermal cells radiating around the stoma. Leaf is isobilateral. It has cellulose, tannins (condensed), calcium carbonate, fats and fatty oils, proteins, lignin, starch. Numerical and quantitative features are within standard range. Conclusion: The diagnostic features established from this research are a useful guide for correct identity and quality assurance in the preparation of A. toxicaria leaf for curative purposes.

INTRODUCTION: Traditional medicine has remained the most affordable and easily accessible source of treatment in the primary health care system of poor communities and local therapy is the only means of medical treatment for such communities 1. As more people return to herbal remedies, adulteration and substitution of these herbals are on the increase.

This is further worsened by the complexity in composition and diversity in various constituents of the plant due to different geographical sources for these plants. Antiaris toxicaria is one of such medicinal plants with a remarkably wide distribution in tropical regions. It is commonly referred to as “bark cloth tree” in English and often described as “false iroko” in Igbo because of its striking morphological resemblance to Iroko tree (Milicia excelsa). The wood of A. toxicaria resembles that of Triplochiton scleroxylon K.Schum and can be used as a substitute for the latter. It can also be substituted for Terminalia superba Engl. & Diels and for the wood of Pterygota macrocarpa K.Schum 2. It is a large tree in the mulberry and fig family, growing to 25 – 40 m tall, with a trunk up to 40 cm diameter, often buttressed at the base, with pale grey bark 3. In Africa, there are three varieties clearly distinguished by habitat and their juvenile forms, one is confined mainly to wooded grassland, the other two are found in wet forests, riverine forest and semi-swamp forests 2, 4. It is valued as a source of wood, bark cloth, and pharmacological or toxic substances 5, 6.

In Africa the latex is applied to cuts, wounds and skin complaints such as eczema and leprosy, and is taken internally as a purgative 5. The active principles of the latex are cardiac glycosides, which have digitalis-like effects on the heart 7, 8. In larger amounts they lead to cardiac arrest and secondary effects such as vomiting and convulsions. The latex is one of the principal components of most dart and arrow poisons in South-East Asia 9. It is thus used medicinally and as a hunting poison. The bark has a high concentration of tannins that are used in traditional clothes dyeing and paints. It is used as an anodyne, vermifuge and in the treatment of hepatitis 5. A decoction of the inner bark is drunk as a treatment for cancer, leukaemia and spleenomegaly 10. 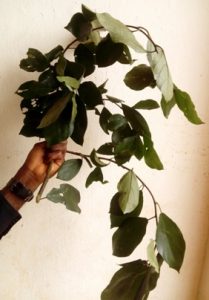 An aqueous ethanol extract of the bark is reported to have cytotoxic activity against tumour cell lines 11. In Indonesian traditional medicine, the leaves and root are used to treat mental illness 12. In Africa and various parts of Asia, the leaves and bark are used as astringent and febrifuge 13. Added to this, the seeds are also used as a treatment for dysentery 14. Against the rampant cases of adulteration and resemblance of Antiaris toxicaria to a nember of other plants, establishment of the pharmacognostic profile of the leaves of Antiaris toxicaria will assist in standardization, which can guarantee quality, purity and identification of samples 15.

MATERIALS AND METHODS: Fresh leaves of Antiaris toxicaria were collected from a tree along Nru junction road near University of Nigeria, Nsukka new gate in the month of July, 2015.  The leaves were carefully washed in water to exclude dusts and other extraneous materials. Identification and authentication were done by Mr. A.O. Ozioko, a taxonomist with the International Centre for Ethnomedicine and Drug Development (Inter CEDD) Nsukka, where voucher specimens were deposited with the number INTERCEDD/ Mora./ 082015.

Macroscopy: The following macroscopic and organoleptic characters for the fresh leaves were noted: size and shape, colour, surfaces, venation, presence or absence of petiole, the apex, margin, base, lamina, texture, odour and taste 16, 17.

Fluorescence Study: A small quantity of the dried plant powder was placed on a grease-free microscopic slide and 1 – 2 drops of freshly prepared reagent solution was added, mixed by gentle tilting the slide and waited for 30 minutes. The prepared slide was placed inside an ultraviolet chamber and the colour exhibited was observed in visible light: short (254 nm) and long (365 nm) UV radiations. The colour observed by application of different reagents in different radiations was recorded 18.

Microscopy: The outer epidermal membranous layer (in fragments) were cleared in chloral hydrate, mounted with glycerin and observed under a compound microscope. The presence / absence of the following were observed: epidermal cells, stomata (type and distribution) and epidermal hairs (types of trichomes and distribution). The transverse sections of the fresh leaves through the lamina and the midrib as well as a small quantity of the powdered leaves were also cleared, mounted and observed 19.

RESULTS: Macroscopically, the leaf is simple in composition, alternate in arrangement, apex is acute, base is cuneate, margin is crenate, venation is reticulate, shape is lanceolate or oblong and average leaf size is 11.63 cm length x 6.20 breadth. Fresh leaves are green in colour; odourless and tasteless (Table 1).

Micro morphological features revealed rosettes and prisms of calcium oxalates (Fig. 2 and 5), numerous similar epidermal cells radiating about the stoma (anomocytic arrangement) as shown in Fig. 3 below. Uniseriate covering trichomes are present on both epidermal surfaces and are triangular with a very pointed tip and a broad base (Fig. 4 and 5). It has Isobilateral leaf arrangement. The transverse section of the mid-rib shows wide parenchymatous pith against pericyclic fibres in the petiole (Fig. 5). Chemomicroscopic examination of the leaves revealed the presence of cellulose, tannins (condensed), calcium carbonate, fats and fatty oils, proteins, lignin, starch. The fluorescence analysis shows various colours exhibited by the powder in different solvents (Table 3). The numerical and quantitative values are presented in Tables 4 and 5. 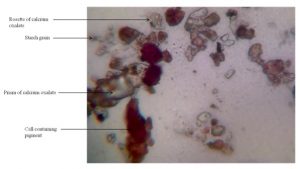 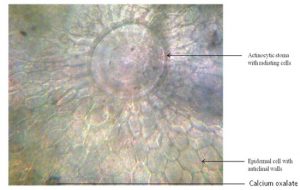 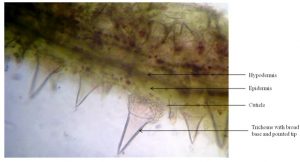 FIG. 4: SECTION OF A. TOXICARIA LEAF SHOWING VARIOUS COMPONENTS OF THE EPIDERMAL LAYER 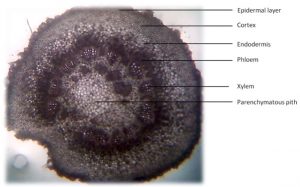 DISCUSSION: A. toxicaria leaf is used for curative purposes by traditional herbal practitioners and there is a need to ensure a standard guide to preparation. This would forestall adulteration, which can render a medicinal plant poisonous due to the nature of adulterants. The pharmacognostic parameters established in this research would facilitate the creation of a monograph. A. toxicaria is a plant that can be confused with Milicia excelsa due to macro-morphological resemblance. The results of these investigations could, therefore, serve as a basis for proper identification, collection and investigation of the plant. Key macro– and micro– morphological features of the leaf described are distinctive and analytical.

Chemo microscopy, numerical data and quantitative leaf microscopy are parameters that are unique to the plant and are required in its standardization. The veinlet termination, vein islet numbers and stomatal index are relatively constant for a particular leaf 15 and therefore particularly diagnostic.

CONCLUSION: Data obtained from this pharmacognostic studies are useful diagnostic profile for Antiaris toxicaria and could be used for quality control of the plant in terms of purity and authenticity.

ACKNOWLEDGEMENT: We are thankful to the following that assisted in diverse ways that resulted in the success of this research work: The entire staff of Pharmacognosy Department, Faculty of Pharmaceutical Sciences University of Nigeria Nsukka.