ABSTRACT: Cordia obliqua Willd. (Clammy Cherry) belongs to genus Cordia and family Boraginaceae. It possesses a number of traditionally mentioned medicinal activities like purgative, diuretic, antipyretic, anthelmintic, analgesic and hepatoprotective. The present work is related with Pharmacognostic, Phytochemical and antioxidant study of Cordia obliqua leaf. Under Pharmacognostic study various parameters like macroscopic, microscopic and physiochemical parameters were studied as per WHO guidelines. This work will be helpful in authentication of Cordia obliqua Willd. plant. After this successive soxhlet extraction was performed for leaf powder with various solvents in increasing order of polarity like Hexane, Chloroform, Methanol and water. These extracts were used to study presence of various chemical constituents as well as to determine amount of total Phenol and Flavonoids content. Further antioxidant activity study was performed with help of DPPH and H2O2 radical scavenging methods. The leaf methanol extract was found to have maximum amount of Phenols and Flavonoids. In antioxidant activity study, again the results with methanol extract were found better and comparable with standard and it may be due to presence of more amounts of Phenols and Flavonoids. Finally it was concluded that the leaf methanol extract is a good antioxidant and it may also be helpful in other biological activity study.

INTRODUCTION: Cordia obliqua Willd. Plant commonly name as Clammy Cherry, belongs to family Boraginaceae. It is a deciduous tree with medium height and found throughout the mid-Himalayas up to an elevation of 1470 meters. It is also found in other parts of the world like Tropical Australia, New Guinea, Hainan, Philippines, Formosa and Java.

Its fruits are sweet and possess many medicinal activities like expectorant, diuretic, maturant, anthelmintic, antipyretic and analgesic. Also useful in disease of chest, urethra and spleen. Its raw fruits can be used as vegetable and in form of pickle. The fruit’s mucilage can be used as gum for pasting paper sheets and cardboard.

A number of phyto-constituents are present in plant like Pyrrolizidine alkaloids, Phenolics, Triterpenes, Tannins, Flavonoids and Phenylpropanoid derivatives. The studies performed on various parts of this plant are anti-inflammatory activity, diuretic activity, hypotensive, respiratory stimulatory activity and antimicrobial activity and a study on efficacy of its gum as sustained release matrix forming material. Chemical examination of its seeds, roots, fruits and stem bark resulted in isolation of various constituents like alpha-amyrin, betulin, lupeol, octacosanol, beta-sitosterol, hentricontanol, hesperitin-7-rhamnoside and taxifolin-3,5-dirhamnoside.1, 2 As per distribution of Cordia obliqua plant, more studies should be available on this but still less work is reported. So we have selected this plant as our research topic and tried to perform primary work on its leaves.

The leaves of Cordia obliqua Willd., family Boraginaceae were procured from Jammu and were authenticated and identified by Dr. (Mrs) Sunita Garg, Chief Scientist, Raw Material Herbarium and Museum (RHMD), Council of Scientific and Industrial Research-National Institute of Science and Information Resources (CSIR-NISCAIR), New Delhi, with the reference no. NISCAIR/RHMD/Consult/-2014/2383-163. The plant sample was also deposited in herbarium of Pharmacognosy department, ASBASJSM College of pharmacy, Bela (Ropar).

It includes study of leaf macroscopic features, microscopic features and physico-chemical parameters. Macroscopic features includes study of colour, odour, size, shape, taste and special features including touch and texture etc of drug with help of sensory organs. Microscopic features tell about tissue arrangement in transverse section of leaf and type of stomata, trichomes, vascular bundle and different cells. Along this we also get to know about cell content and crystalline structures. With help of photomicroscope we can check various leaf constants. In physico-chemical parameters we have studied various Ash values, extractive values, loss on drying, foreign organic matter, swelling index and foaming index. These all were performed using standard procedures as per WHO guidelines.3-5

The plant material was dried in shade and powdered in grinder. About 250 g of powdered plant material was extracted successively in Soxhlet apparatus by using solvents in order of increasing polarity viz., Hexane, Chloroform, Methanol and water. After each extraction solvent was recovered using rotary vacuum evaporator and dried extracts were stored in vacuum desiccators. These extracts were used in further phyto-chemical and antioxidant study.6

To determine various phyto-constituents, standard chemical tests were applied on leaf extracts and their observations were recorded to confirm presence or absence of these constituents.7-9

Gallic acid (10 mg) was dissolved in 100 ml of 50% methanol (100µg/ml). It was further diluted to 20, 40, 60, 80, 100 and 120 µg/ml concentration. To one ml of each dilution, 9 ml of distilled water and 1.5 ml of Folin Ciocalteu’s reagent was added. This mixture was incubated for 5 min at room temperature. After incubation period, 4 ml of Na2CO3 (20%) was added in each mixture and volume was made up to 25 ml with distilled water. Each mixture was agitated and left to stand for 30 min at room temperature. These mixtures absorbance was measured at 765 nm by using UV/VIS spectrophotometer. Distilled water was used as blank.

For sample preparation, 250 mg of each extract was added in 15 ml of methanol (50%) and then extracted for three times by maceration for 1 hour. The extract was filtered and volume was made up to 25 ml using methanol. Then same process was done as in preparation of standard for one ml of extract dilution and absorbance was measured at 765 nm by using UV/VIS spectrophotometer. Distilled water was used as blank. A standard curve was prepared for absorbance against Gallic acid concentration. This curve was used for estimation of total Phenols in leaf extracts sample and the results were expressed in µg/ml concentration. 10-12

For preparation of sample, about 250 mg of each extract was dissolved in 25 ml of methanol and then extracted for three times by maceration for 1 hour. The extract was filtered and volume was made up to 25 ml using methanol. Similarly, 0.5 ml of each extract solution was reacted with aluminium chloride for flavonoids content determination as described in standard preparation and absorbance was measured.

A standard curve was prepared for absorbance against Rutin concentration and it was used for estimation of total flavonoids in samples. The results were expressed in µg/ml concentration.10-12

Same procedure was applied for 50 mg of leaf extracts and absorbance of all dilutions was measured at 517 nm against methanol as blank.

Macroscopic parameters: The macroscopy study was performed on fresh mature leaves. It was green in colour and having characteristic odour and taste. Shape was elliptic ovate with length 9-14.5 cm and width 6-10.5 cm. Leaf base was rounded or cordate, apex rounded to obtusely acuminate and margin entire or slightly dentate. Both leaf surfaces were glabrous (Fig 1). 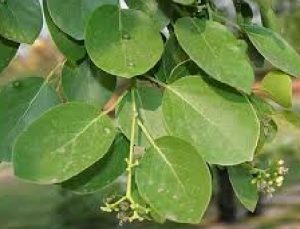 The microscopy study was performed on leaf transverse section and leaf powder. The study shows that it was a dicot leaf in which mesophyll is differentiated in to palisade layer and spongy parenchyma. It also confirms the presence of anomocytic stomata, unicellular covering trichome, multicellular glandular trichome, spiral vessels, fibers, crystals, unicellular epidermis with wavy cell wall and ovoid shape vascular bundle (Fig. 2-4). 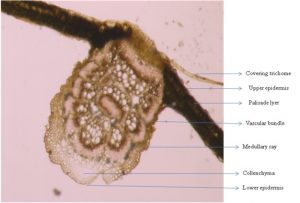 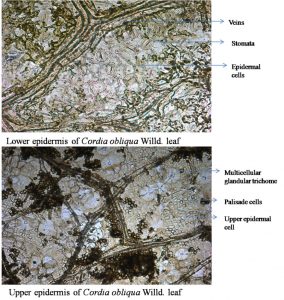 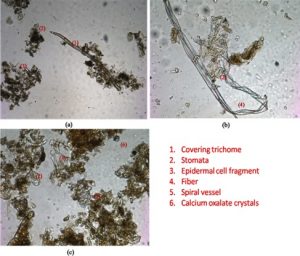 Phytochemical screening: The observations of various chemical tests is shown in Table 3.

The Total Phenols Content of various extracts of Cordia obliqua leaf was calculated as shown in Table 4 and standard curve as Fig. 5. 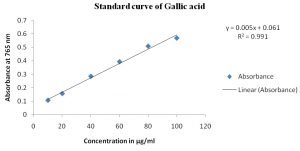 FIG. 5: STANDARD CURVE OF GALLIC ACID FOR THE ESTIMATION OF TOTAL PHENOLS CONTENT

The total flavonoid content of various extracts of Cordia obliqua leaf was calculated as shown in Table 5 and standard curve as Fig 6. 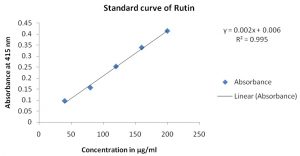 FIG. 6: STANDARD CURVE OF RUTIN FOR THE ESTIMATION OF TOTAL FLAVONOID CONTENT

DPPH % Scavenging effect: The antioxidant effect of various extracts of Cordia obliqua Willd. leaf by DPPH % scavenging is shown in Table  6 and Fig. 7. 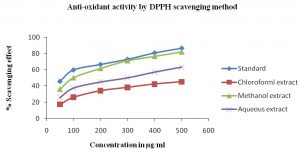 The antioxidant effect of various extracts of Cordia obliqua Willd. leaf by H2O2 % scavenging is shown in Table 7 and Fig 8. 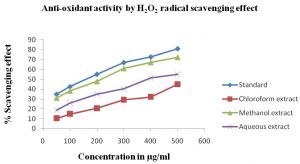 DISCUSSION: Cordia obliqua Willd. is a well known plant of Boraginaceae family but very less work is available on this plant. We have selected leaves part of this plant to perform macroscopy, microscopy, Phytochemical analysis and anti-oxidant activity study. All these parameters were studied according to standard methods available. Under macroscopic study, size, shape, surface, venation, colour, odour, taste, apex and margin of Cordia leaves were studied with naked eyes and other sensory organs. Microscopy study was performed by transverse section of leaf. Powder drug was also studied for the presence and type of trichome, stomata, epidermal cells, Calcium oxalate crystals and fibres. Along with these microscopic parameters, leaf constants were also observed. Various physico-chemical parameters were also studied as per WHO guidelines. Extraction of dried leaf powder was performed using Soxhlet apparatus in the order of increasing polarity.

These extracts were studied for the presence of various phyto-constituents using standard chemical tests. Maximum constituents were found in leaf methanol extract. Then total phenol and total flavonoid content were determined for leaf chloroform, methanol and water extract and these both were found good in methanol extract and least were present in chloroform extract. The anti-oxidant study was performed using two methods, DPPH radical scavenging and H2O2 radical scavenging effect. These both methods shows good anti-oxidant effect by methanol extract when compared with standard Ascorbic acid. This may be due to presence of more amounts of Phenols and Flavonoids. The anti-oxidant effect was increasing with increase in concentration of extract.