The study is aimed at development of physicochemical parameters and to investigate the active principle present in Tridax Procumbens Linn. Tridax Procumbens Linn.  (Asteraceae) commonly known as Coat Buttons is an important plant used against various disorders in indigenous system of medicine such as Wound-Healing, Hepatoprotective, Anti-Inflammatory, Anti-diabetic and Immunomodulatory activities. Thus from the extensive literature survey it was revealed that no reports were available on microscopic evaluation, standardization parameters and chemo profile of Tridax Procumbens to check the identity and purity of the drug. The present work embodies the investigations carried out to establish methods for quality control of drugs as per WHO guidelines: complete botanical evaluation which comprises macroscopic, microscopy physicochemical parameters like loss on drying extractive value, ash value and to investigate the Phytochemical present the extract in the preliminary level were carried out for the quality control of the drug. Thus it was thought worthwhile to explore this endangered plant on the basis of this standardization parameter. The study will provide referential information for the correct identification of the crude drug.

INTRODUCTION: Drug consists of fresh leaves and stems of Tridax procumbens Linn  family (Asteraceae). It is a common plant found in tropical areas of all countries, growing primarily during raining season. It is commonly known as ‘Ghamra’ in Hindi and in English popularly called ‘Coat button’ because of appearance of flowers.  Tridax procumbens reported hepatoprotective activity of against galactosamine/lipopo-lysaccharide induced hepatitis in rats1 .It also possess Anti-Inflammatory activity of on Carrageenin-Induced Paw Edema in Rats2,  Immunomodulatory effects3, Anti-diabetic activity4, In vitro activity against promastigotes of Leishmania Mexicana5, Hemostatic activity6, Antibacterial Activity against Bovine Mastitis Isolated Staphylococcus aureus7.

Authentication of the Plant Material: The plant was authenticated by Dr. S. S. Rao, Joint  Director, The Botanical Survey of India, (Pune), as Tridax Procumbens Linn.  (Asteraceae) with voucher specimen no: AAVIZTRIP1. The leaves were  collected in the month of January 2010 from Fields of Baramati. They were washed, shed dried and were pulverized with mechanical pulverizer for the size reduction. It was then passed through # 60 and the fine powder was collected and used for the experiment and preparation of Extract. The fresh leaves were used for Microscopy Identification.

Pharmacognostic Studies: Morphological Studies were carried out by using simple determination technique, the shape, size, color, odor, margin and apex. Apex of the leaf .Microscopic Studies were carried out by preparing of thin hand section of leaf. The sections were cleared with alcohol and stained as per the Protocol. Histochemical  reaction were applied with Concentrated Hydrochloric Acid and Phloroglucinol and were mounted in Glycerin for identification of Lignified Elements, Iodine Solution for Identification of Starch Grains, 60% Sulphuric Acid for Calcium Oxalate Crystals in the powdered leaf by reported methods8, 9.

Physico Chemical Parameters: The parameter was done to evaluate the percentage of total ash, water soluble acid insoluble ash were calculated as per Indian Pharmacopoeia10, 11. The extract of the powdered leaves were prepared with the different solvents for the study of extractive value. Fluorescence analysis was also carried out for the powder as well as different extracts.

Powder Analysis: Preliminary analysis of the powder of leaves of Tridax Procumbens Linn.  were carried out with different chemical reagents12, 13.

Preliminary Phytochemical Analysis: For the Preliminary phytochemical analysis, the extract was prepared by weighing 100gm of dried powdered leaf and were subjected to maceration with different solvents as per the Polarity, methanol, hydro-alcoholic, and finally with Aqueous. The extracts were filtered in each step, concentrated, and the solvent was removed by rotary evaporator. The extracts were dried over desiccator and the residues were weighed. The presence and absence of the primary and secondary phyto-constituents was detected by usual prescribed methods14.

Petiole: Kidney shaped towards the distal end and crescent shaped towards the laminal side. Single layered epidermis covered with cuticle and interrupted by simple, multicellular, 3- 5 celled trichomes. Hypodermis 1- 2 celled collen-chymatous. Ground tissue parenchymatous; vascular bundles 5, the size of the vascular bundles various from centre to margin i.e. large to small. These are centripetal i.e. xylem surrounded by the phloem.

Leaf: Transverse section (T. S.) of leaf showed dorsiventral, epidermis single layered on both the surfaces and covered with thick cuticle. T.S. passing through the mid rib region shows slight depression on ventral side and slightly protuberated on dorsal size. Trichomes were of covering type which are simple, multicelled (3-6 celled) and more in number on dorsal side. The basal cells of the Trichome are swollen and Trichome looks like claw. Meristeel consists of single centrally located collateral vascular bundle surrounded by some parenchymatous cells filled with dark content. T. S. passing through the laminar region shows single layered palisade cells just below the epidermis followed by 5-7 celled mesophyll, parenchyma mostly devoid of inter cellular spaces. 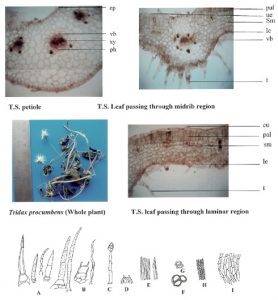 FIG. 1: SHOWING MICROSCOPY OF LEAF OF TRIDAX PROCUMBENS L. AND ITS POWDER CHARACTERISTICS

Fluorescence Analysis: The powder drug and extracts were subjected to fluorescence analysis as per the standard procedure.

TABLE NO 4:- FLUORESCENCE ANALYSIS OF POWDER

Preliminary Phytochemical Analysis: Preliminary phytochemical screening revealed the presence of Glycoside, Flavonoids, Tannins, Mucilage, Carbohydrate and Reducing Sugar. Now a day the standardization of crude drugs has become very important for identification and authentication of drug. But due to certain problems the importance was not up to the mark. Thus, the lack of Standardization technique fails to identify the dug from its originality which there by exploits the usage of drug from it’s Traditional System of Medicine.

The plant Tridax procumbens L. is used widely for curing various diseases and gives a helping hand to the Humans. Thus a perfect protocol was designed for its Authentication and identification on the basis of Microscopy and chemical analysis. Thus the present investigation was aimed and the results were found to be significant and encouraging towards the goal for Standardization.