PHARMACOGNOSTIC STUDIES ON LEAVES AND STEMS OF IPOMOEA SEPIARIA ROXB.

PHARMACOGNOSTIC STUDIES ON LEAVES AND STEMS OF IPOMOEA SEPIARIA ROXB.

ABSTRACT: Ipomoea sepiaria Roxb., also known as Purple heart glory is a slender vine belonging to family Convolvulaceae. It is one among the ten sacred plants known collectively as “Dasapushpam” in Kerala. These plants are used for rejuvenating the body in the form of ‘karkidakakanji’ in the monsoon season in Kerala. Juice of the plant is used as deobstruent, diuretic, hypotensive, uterine tonic and antidote to arsenic poisoning. The present study aims at providing a detailed information of microscopic features of the leaf and stem. In cross sectional view the leaf exhibits short adaxial core, semicircular abaxial midrib and smooth lamina. The vascular bundle of the midrib is single, planoconvex and collateral. The vascular bundle includes wide, angular compact metaxylem elements and narrow circular protoxylem elements. Prominent glandular trichomes occur frequently on adaxial and abaxial epidermal layers. The glands of these trichomes are capitate type. The stem is circular, with short conical spiny ridges at certain places. It consists of intact epidermis, narrow cortex, elliptical hollow cylinder vascular tissues and central pith. Inner to the epidermis occur three layers of small radially compressed parenchyma cells mixed with sparsely distributed sclerenchyma. Secondary phloem and secondary xylem are cylindrical and elliptical in outline. Large calcium oxalate druses are sparsely distributed with pith parenchyma cells. The relevant pharmacognostic data obtained by this study will serve as a standardisation tool in identification and authentication of the plant samples.

Evidence based incorporation of traditional medicine in clinical practice will help to provide quality healthcare to all 1. Ethnobotanical knowledge and traditionally used medicinal practices from all around the world are of global importance and documentation of ethnopharma-cological and ethnobotanical data is a key requisite for further research in the field of herbal medicine and its implementation in clinical practice 2.

India is having a rich vegetation with a wide variety of plants, because of the extreme variations in geographical and climatic conditions prevailing in the country. The efficacy and safety of all the reported ethnomedical plants needs to be evaluated for phytochemical and pharmacological studies, especially the plants with high informant consensus factor, fedility level and use value should be given priority to carryout bioassay and toxicity studies 3.

Ipomoea sepiraia Roxb. also known as Purple heart glory is a slender vine belonging to family Convolvulaceae. The plant is found on sea costs and on saline soil. In Sanskrit it is known as lakshmana, in hindi as Bankalmi and in Malayalam as Tirutali. It is one among the ten sacred plants known collectively as “Dasapushpam” in Kerala. These plants are used for rejuvenating the body in the form of karkidakakanji in the monsoon season in kerala which is also prescribed in text books of ayurveda. This plant preparation is useful in preventing the aggravation of vata dosha which usually occurs in the monsoon. Most of the plants are scientifically validated. Juice of the plant is used as deobstruent, diuretic, hypotensive, uterine tonic, antidote to arsenic poisoning. The plant is reported to show aphidicidal activity and appeared to be useful as pesticides. Seeds are used as cardiac depressant, hypotensive, spasmolytic. Plant is also used in the treatment of sterility in women, urinary retention, constipation and gynaecological disorders. Ipomoea resin in the seeds contain non-ergoline type indole alkaloids, ipobscurine A and B, and a serotonin alkaloid ipobscurines C 4.

Leaves are simple alternate, entire, blotched with brownish patches towards the middle. Flowers are delicate purple or white with a purple eye, along with short to long peduncles and short pedicels 4. The root system consists of a fairly long, somewhat thickened taproot and several slightly thinner or slender branches, arising from its base with very few wiry rootlets. The preliminary phytochemical screening of leaves of Ipomoea sepiaria showed the presence of saponins, glycosides, tannins, resins, flavanoids, alkaloids and other phenolic compounds 5.

The phytochemical evaluation of roots of Ipomoea sepiaria for the presence of various functional groups revealed the presence of alkaloids, saponins, phenols and resin 6. The methanolic extract of roots found to possess significant antifungal activity against Candida albicans substantiating the use of root in the treatment of leucorrhoea 7. Gas Chromatography and Mass Spectrometry of ethanolic extract of the leaves of Ipomoea sepiaria confirmed the presence of 20 compounds and the major compounds are squalene, stigmasterol and sitosterol 8. Molecular docking studies were carried out to identify the best bioactive compound among 32 compounds separated by GC-MS analysis against type 2 diabetes. Out of 32 compounds 1-Monolinoleoyglycerol trimethyl silylether was identified as the best based on energy values by targeting transcription factor7-like 2 (TCFL2) genes which is responsible for type 2 diabetes 9.

The flavanoid quercetin was estimated from Ipomoea sepiaria by RP-HPLC method 10. An antioxidant principle Dodecyl-p-coumarate was isolated from methanolic extract of Ipomoea sepiaria 11. The powdered leaves and extracts of Bankalmi as a 3% mixture provided good protection for black gram seeds by reducing insect oviposition, adult emergence and grain infestation rates 12. So far no detailed systematic pharmacognostic studies, which are helpful in identifying the plant, has been done. The present study aims at conducting a detailed study on microscopic features of the leaf and stem.

MATERIALS AND METHODS: The plants were collected from Thodupuzha part of Idukki District, Kerala. The plant was identified at Department of Botany, Nirmala College of Arts and Sciences, Muvattupuzha, Kerala and a specimen herbarium (Voucher Specimen No: NCH537) was kept there.  The plants were washed properly and were used for taking microscopic sections. Fresh, mature and healthy plant parts i.e., leaf and stems are used for microscopic evaluation.

Microscopic analysis of leaf and stem were carried out using semi-permanent preparations as described below. Small portions of leaf and stem of Ipomoea sepiaria were cut and fixed in FAA (Formalin 5 ml + acetic acid 5ml + 70% ethyl alcohol - 90 ml).

The thickness of the sections was 10 - 12 µm. The sections embedded in the ribbon of paraffin was mounted on the slide. To make the sections stick to the slide Haupt’s adhesive was used. Dewaxing of the sections was done by passing through Xylol-Alcohol series. These sections were stained with toluidine blue and mounted in Canada balsam solution and studied the features. Since toluidine blue is a polychromatic stain, the staining results were remarkably good and some cytochemical reactions were also obtained. The dye rendered pink colour to the cellulose walls, blue to the lignified cellulose walls, blue to the lignified cells, dark green to suberin, violet to mucilage, blue to protein bodies 13. The anatomic features were described as given in the published literature.

Anatomy of the Leaf: In cross sectional view the leaf exhibits short adaxial core, semicircular abaxial midrib and smooth lamina Fig. 1A. The midrib is 553 micrometer thick and 750 micrometer wide. Adaxial conical part of the midrib consists of small thick walled cells and the interior part of the cone includes cluster of thick walled compact cells. The palisade cells extend upto the thick walled cells of the cone Fig. 1B. The abaxial and adaxial portions of the ground tissue includes angular thick walled compact parenchyma cells. The vascular bundle of the midrib is single, planoconvex and collateral. 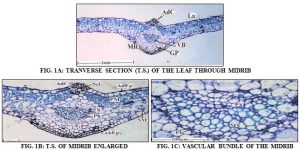 The lamina is bifacial having palisade mesophyll located on the adaxial side and spongy mesophyll cells occur on the abaxial part. The palisade cells are in two layers. The cells are thick and cylindrical and compact.

The abaxial epidermal cells are also thick and rectangular. Prominent glandular trichomes occur frequently on adaxial and abaxial epidermal layers. The glands are capitate type. The gland has a thick one celled stalk, which is levrried in the epidermis. The terminal group of cells form a circular thick plate. Part of the gland is 35 micrometer wide.

Anatomy of the Stem: The stem is circular, with short conical spiny ridges at certain places Fig. 3A. The stem is 1.25 mm in diameter. It consists of intact epidermis, narrow cortex, elliptical hollow cylinder vascular tissues and central pith Fig. 3A, 3B. 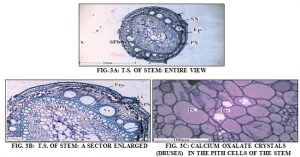 Secondary phloem and Secondary Xylem are cylindrical and elliptical in outline. The cylinder is thick on two opposite sides comprising secondary vascular tissues. The remaining two opposite sides are very thin and only primary vascular tissues. Fig. 3A and 3B. In the thick portion, there is a wide zone of secondary elements which are six layers of cells. The cells are in compact vertical rows Fig. 4A. The secondary xylem consists of a layer of four or five wide, circular thin walled vessels.

The vessels are 130 micrometer in diameter. Inner to the thick and thin portions of the vascular cylinder occur a layer of primary xylem vessels with wide metaxylem and narrow protoxylem Fig 3B, 4A. The inner part of the primary xylem has wide clusters of phloem elements located all along the inner circumference.

CONCLUSION: The pharmacognostic studies help in the identification of Ipomoea sepiaria Roxb. by comparison of the transverse section of leaf and stem parts which are explained in detail. This data will surely give preliminary information which is necessary for the standardisation of the plant material, which is to be used in different formulations in herbal drug industries.

ACKNOWLEDGEMENT: We are grateful to Prof. P. Jayaraman, PARC, Thambaram, Chennai for his valuable guidance.