ABSTRACT: Cordia obliqua Willd var. obliqua. is a medium sized, broad leaved deciduous tree. It is found growing not only all over Asia but nearly the whole of the globe. Cordia obliqua (F. Boraginaceae) is traditionally used against fever, chest disease, leprosy, gonorrhoea and helminthes. Bark is bitter, mild astringent and tonic and used in general debility and convalescence. Decoction of the bark is used as a gargle in sore mouth. Juice obtained from the bark relieves severe colicky pains. Bark is anthelmintic, constipating, cooling, depurative and used in vitiated conditions of kapha, pitta and leprosy. In view of its medicinal importance, a complete study on macroscopic, microscopic characters and analytical parameters of stem bark have been made and presented. Histological studies were conducted by infiltration method. Anatomical features of the bark were studied using transectional, radial and tangential longitudinal sections. Powder characters were analysed and micrometrial measurements of the cells/tissues were carried out. Analytical parameters include ash values, extractive values and crude fibre content. Findings of this work are useful for compilation of monograph for the proper identification and quality control of the stem bark of Cordia obliqua.

A literature survey revealed that a large number of indigenous drugs have already been investigated for their botany and chemistry, but a systematic pharmacognostic study is still lacking. All parts of Cordia obliqua Willd was evaluated for pharmacognostic studies 5 ,but detailed study was lacking on the bark. Pharmacognosy, in recent years has gained immense importance as it is an efficient tool for the authentication and identification of plant raw materials and therefore evaluation of pharmacognostic parameters is an indispensible step when dealing with herbal drugs 6.  Due to the medicinal importance of C. obliqua, a complete study on macroscopic, microscopic characters and analytical parameters of stem bark has been made. This study is an attempt to establish the standardization parameters for pharmacognostic evaluation of C. obliqua.

MATERIALS AND METHODS: Bark of the plant C. obliqua was collected from the foothills of Ayyaswami Malai, Ettimadai, Coimbatore. The plant was authenticated by Dr. G.V.S. Murthy, Botanical Survey of India, Southern circle, Coimbatore (No.BSI/SC/5/21/03-27) and the voucher specimens were deposited in the herbarium of the Dept. of Pharmacognosy.

Histological studies were carried out by infiltration method (microtomy). The material was fixed in FAA for 24 hours, stored in 70% alcohol and were dehydrated in a graded tertiary butyl alcohol series (TBA). The materials were transferred to a mixture of equal parts of paraffin wax and tertiary butyl alcohol. 3/4 of the vial was filled with molten wax and solidified and the material was placed on the top of solidified wax and covered with butyl alcohol paraffin wax. The container was placed inside the oven. The material will sink to the bottom. After one hour the butyl alcohol paraffin mixture was poured off and replaced with pure wax. The process was repeated twice and finally material was embedded in wax. Blocks were prepared and sections were taken at a thickness of 10-12 µm. the sections were dewaxed in xylene and were stained with toluidine blue.

Since toluidine blue is a polychromatic stain, the staining results were remarkably good and some cytochemical reactions were also obtained. The dye rendered pink colour to the cellulose walls, blue to the lignified cells, dark green to suberin, violet to the mucilage and blue to the protein bodies. Photographs of different magnifications were taken with Nikon Labphot 2 Microscopic unit. Micrometrial measurements of cells/tissues were made using standard procedures8. Bark was finely powdered and the microscopic characters were studied9. 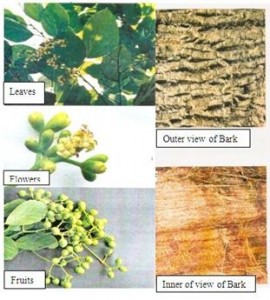 Fig.1 shows leaf, flowers, fruits, inner bark and outer bark of Cordia obliqua Willd. Bark is grayish brown in colour with longitudinal deep fissures. The fissures are wide, several mm long; the ridges of the fissures have transverse splits. Fissures are very prominent in the bark of the main bole of a tree approaching maturity. The bark exfoliates through fine powder; the bark is brittle, fairly hard and fibrous in texture; easily peels off from the wood. The bark has no specific odour or taste. The inner surface of the bark is light brown, even and smooth.

In cross sectional view, the bark is differentiated into a broad outer bark and equally wide inner bark or secondary phloem (Fig.2). The outer bark consists of about six narrow tangential bands of periderm alternating with fairly wide zones of non-periderm tissues (Fig.3.1and 3.2). These two types of zone together constitute what is known as rhytidome. Each band of periderm consists of phellem tissue. The phellem cells are thin and suberised (Fig.3.2).

Origin of the periderm zones: 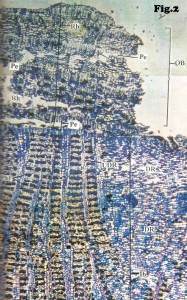 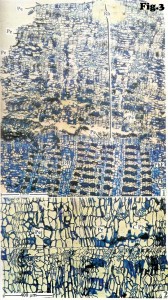 The collapsed phloem is the older part of the inner bark and it occurs inner to the rhytidome. Collapsed phloem consists of dilated and undilated phloem rays, axial parenchyma and rectangular blocks of phloem fibers (Fig.4.1). Non collapsed phloem zone is shown in Fig. 4.2. The sieve tube members (Fig. 4.3) get crushed and obliterated due to the pressure exerted on them by the inner phloem tissue. The phloem rays also expand laterally and dilate into wide bands of tangential cylinders; these cylinders are broken into rectangular blocks by the radially running dilated and undilated rays. The fibers are long, thick walled and lignified cells (Fig.4). The collapsed phloem functions as the store-house of many ergastic substances and active chemical compounds. Crystals and starch distribution were seen (Fig.5) in the bark cells (as seen under polarized light).The major storage products that could be identified microscopically are calcium oxalate crystals and starch grains. The calcium oxalate occurs in the form of fine sand and this type of crystals is called sand-crystals or micro-crystals (Fig. 5.2). The crystals occur in the ray parenchyma and axial parenchyma cells; entire cells are occluded by the crystals. Fig. 5.3 shows the crystal bearing cells and phloem fibres. Fairly large circular starch grains with concentric hilum occur in the axial parenchyma cells (Fig.5.1). 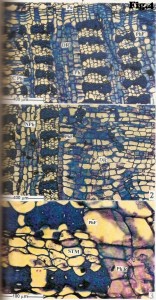 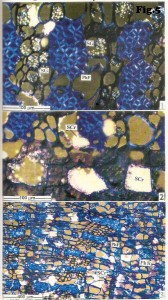 In TLS view, characters of the phloem rays are displayed. The rays are exclusively multiseriate, very broad and very high (Fig.6.2). The ray cells are angular, thin walled and compact. The rays are uniformly homocellular with procumbent cells. The cells of the dilated rays show active divisions of the cells (Arrows in Fig.6.1). 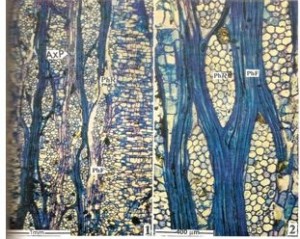 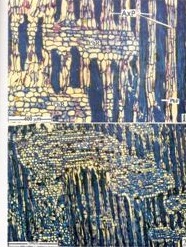 Powdered bark specimen as well as macerated bark were studied under the microscope. Phellem cells, phloem cells, phloem parenchyma and phloem fibers were observed. The phellem cells are thick walled and darker; they are either cubical or rectangular (Fig.9). Phloem parenchyma cells are larger thin walled and rectangular in shape. The fibers are libriform type; thick walled, narrow lumened and lack distinct pits. Micrometrial measurements of cells/tissues are enlisted in Table 1. 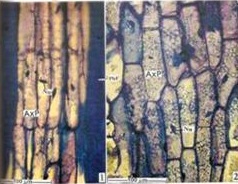 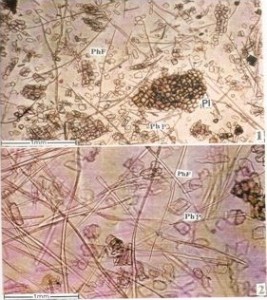 The ash values and extractive values are shown in Table 2. The crude fibre content was found to be 57.92% w/w±1.527 (All values are mean ±S.D. of three analyses.). These values are an important parameter in detecting adulteration or improper handling of crude drugs.

CONCLUSION: This little known plant, Cordia obliqua Willd var. obliqua has not been investigated for its pharmacognostical characters. Standardisation of a crude drug is an integral part for establishing its correct identity. So the information obtained from the present study of detailed pharmacognostic features will be useful in identifying this drug and differentiating if from other related species. In addition, the quantitative microscopic data and analytical parameters are useful in determining the quality and purity of commercial samples and detection of adulteration.