ABSTRACT: In different parts of India, Bombax malabaricum (Family: Bombacaceae), is well known for its traditional use in inflammation, prolapse of uterus or vagina, menorrhoea, diarrhoea, wound etc. Literature survey showed that the leaves of Bombax malabaricum have anti-inflammatory, antipyretic, analgesic and antioxidant activities. Although the plant has much potentiality, proper pharmacognostical standardization of the parts of the plant was still deficient. The aim of the present research work was to carry out a systematic pharmacognostical and phytochemical evaluation of Bombax malabaricum leaves. After collection, the leaves were authenticated and evaluated pharmacognostically to establish its macroscopical and microscopical characters and also that of the powdered leaves. In the microscopical features of Bombax malabaricum leaves, full of mucilage containing cells and numerous calcium oxalate crystal containing mesophyll tissues were seen. In the powder microscopy, stone cell, reticulate type xylem vessels, multicellular covering trichome and glandular trichome were seen. In preliminary phytochemical screening, the methanol extract of the leaves showed the presence of steroids, carbohydrates, tannins, triterpenoids, deoxysugar, flavonoids and coumarin glycosides. The present study, thus, will help to provide important information with respect to the proper identification of the plant for utilization in different herbal products.

INTRODUCTION:Since ancient time plants and plant products have been used for treating various illnesses. To ensure reproducible quality of herbal products, authentication of the starting material is essential. According to World Health Organization 1, the macroscopic and microscopic description of a medicinal plant is the first step towards establishing the identity and the degree of purity of such materials and should be carried out before any tests are undertaken.

Dar et al. isolated analgesic and antioxidant mangiferin from leaves of the plant 8. It was reported earlier by our group that the methanol extract of leaves of Bombax malabaricum possess antipyretic as well anti-inflammatory activity 9-10.

The present research work is concerned with the leaves ofthe above mentionedIndian medicinalplant - Bombax malabaricum,which has a number of reported folk-lore uses but yet not thoroughly explored so far for their exploitation in medicinal use. The first and foremost step,   characterization of different pharmacognostical parameters, has included here, botanical identification, photo-microscopic study, powder characteristics, leaf constants, analytical standardization, florescence study etc. A preliminary phytochemical screening of such leaves has also been done. Thus, all the experimentations had done in this regard have been described below.

Botanical identification: Bombax malabaricum leaves were collected from Azamgarh city, Uttar Pradesh, India during May 2008 to prepare the herbarium and botanical identification was done by Dr M.S. Mondal, a taxonomist and Additional Director, Central National Herbarium (CNH), Botanical Survey of India, Howrah, India The voucher specimen (no. CNH/1-I(314)/2009-Tech II/356/346) was deposited in the herbarium of CNH, Botanical Survey of India, Howrah, India for future reference.

Collection of Specimens: Particularly for this study the leaves of Bombax malabaricum were freshly collected from selected healthy plants. Immediately after collection the leaves were fixed in alcoholic formalin acetic acid solution prepared by mixing formalin, acetic acid and 70% ethyl alcohol (1:1:18). After 24 h of fixation, the specimens were dehydrated with graded series of tertiary butyl alcohol as per the schedule 11.

Infiltration of the specimens was carried by gradual addition of paraffin wax until tertiary butyl alcohol solution attained super saturation. The specimens were then casted with melted paraffin to form hard paraffin blocks containing the specimens.

Preparation of Sections: The paraffin embedded specimens were sectioned with the help of rotary microtome and 10-12 µm thickness of the sections was made. Dewaxing of the sections was done using specific procedure and followed by that, the sections were stained with toluidine blue 12. Since, toluidine blue was a polychromatic stain, the staining brought about some cytochemical reactions in which the dye rendered pink color to the cellulose walls, blue to lignified cells, violet to the mucilage, blue to the protein bodies etc.13.

However, whenever necessary, sections were also stained with safranin, fast-green and iodine-potassium iodide. For studying the stomatal morphology, venation pattern and trichome distribution, either, paradermal sections (parallel to the surface of leaf) were made and then cleared with 5% sodium hydroxide or epidermal peeling was prepared through partial maceration by employing Jeffrey’s maceration fluid 11. Cleared sections were then mounted with glycerin for microscopical observation.

Moreover, powdered materials of leaves of the plant were also cleared with chloral hydrate, further treated either with acetic acid or with phloroglucinol and hydrochloric acid or with iodine-potassium iodide solution as per need and then mounted in glycerin medium. The different cell types were later observed at lower and higher magnification for the report.

Photomicrographs: For microscopic description of tissues, photomicrographs of different magnification were taken with Nikon Labphot 2 microscopic unit. For normal observations, a bright field microscopy was used and for the study of crystals, starch grains and lignified cells, a polarized light was employed. However, since these structures have birefringent property, under polarized light they tend to appear bright against the dark background. Magnifications of the figures were indicated by the scale-bars. Descriptive terms of the anatomical features were given as per standard anatomy books.

Leaf constants: Determination of quantitative microscopical constants like vein-terminal number, vein-islet, palisade ratio and stomatal index were done according to the established procedures 14.

Analytical parameters: Various analytical parameters which include foreign matter, ash values, water content and foaming index in the raw materials were determined by following the WHO guidelines1. In earlier study it was found that different plant secondary metabolites showed specific color with different chemicals 14. In this regard, powdered material of and Bombax malabaricum leaves, was mixed with different chemical agents like dilute hydrochloric acid, concentrated hydrochloric acid, dilute sulphuric acid, conc. sulphuric acid, 10% potassium hydroxide, ferric chloride, distill water, ammonia, iodine and observed under normal light and ultra violet light (254 nm and 366 nm) for the effect of different chemical agents on powdered drug. This preliminary study helped for standardization of the crude drug as well as further processing of the sample with some indication regarding the nature of chemical compounds present in it.

Florescence Study: Flavonoids, coumarin and other different compounds produce specific florescence characteristics which are helpful for preliminary chemical study as well as for standardization of specific plant materials. The powdered leaves were extracted with different solvents like petroleum ether, cyclohexane, ethyl acetate, acetone, methanol, water in cold maceration technique for 24 hr; the sample were filtered and filtrate was seen under ultra-violet rays at 366 nm for observing any specific florescence.

Macroscopical Features: The tree has the compound leaves which is palmate in appearance. It exactly appears as the palms appear in man. It is digitate, large, spreading, glabrous which has common petiole, and the size of leaf is 15-30 cm long. One leaf is composed of several leaflets. Five leaflets are common in one leaf but sometimes up to seven leaflets could be found. The size of leaflets varies from 10 to 20 cm. The leaflets are lanceolate, acuminate, more or less coriaceous and entirely glabrous. Dried leaves are yellowish green in color and brittle in nature.

Leaflets: The leaflets were dorsiventral in symmetry with circular midrib and thin lamina forming wings on either side of the midrib (Figure 1). The midrib had equally projecting upper and lower parts, so that it was circular in sectional view. It was 1.5 mm thick and 1.2 mm wide. It consisted of outer ground tissue and complex vascular structure. Epidermal layer was thin with small papillate cell and thick cuticle. The epidermal cells had periclinal divisions producing three or four layers of multiple epidermises (Figure 1). 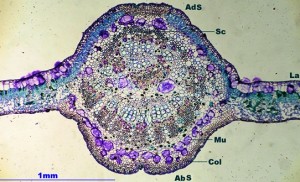 FIGURE 1: TS OF MIDRIB OF LEAF OF BOMBAX MALABARICUM

The inner portion of the adaxial and abaxial part consisted of fairly wide zone of collenchyma cells which had thick walls. The palisade layer of the lamina extended up to the shoulders of the adaxial part and forms adaxial transcurrent bands (Figure 2). The minor zone of the midrib was parenchymatous with highly dilated wide mucilage filled cavities. The vascular tissues formed a complex structure. It consisted of a circular xylem strand with phloem running all around xylem circles. It was in the adaxial part. In the abaxial part, there was a wide, shallow arc of xylem strand with external phloem (Figure 2). 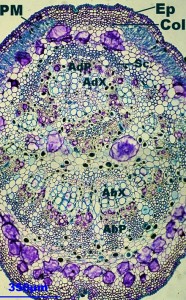 FIGURE 2: A SECTOR OF THE MIDRIB ENLARGED OF BOMBAX MALABARICUM

Xylem strand consisted of short, parallel lines of wide, angular elements. Phloem occurred in small segments. In the adaxial part, the vascular circle was surrounded by a thick cylinder of sclerenchyma fibers. In the abaxial part, the sclerenchyma was in separate thick segments. Mucilage cells occurred in the phloem tissue also. The xylem elements were up to 40 µm wide.

Crystals: When the sections of the midrib were viewed under the polarized light microscope, calcium oxalate druses were seen scattered randomly in the ground cells (Figure 2-3). They were most abundant in the peripheral tissue. The druses were 10-20 µm wide.

Lamina: The lamina was 300 µm thick. The adaxial epidermis was thin with rectangular thick walled cells and prominent cuticle. The epidermal cells were 10-12 µm thick. Inner to the epidermis, there were two layers of subepidernmal cells; the upper layer consisted of narrow rectangular cells and the lower row of cells was wider and vertical elongated (Figure 4). The abaxial epidermis was thin and the cells were narrowly oblong; it was also two layered with slightly wider inner layer of cells. Along with upper part, the inner dilated epidermal cells were filled with mucilage (Figure 4). The mesophyll consisted of a thick zone of palisade which was two layered; the cells were thin, cylindrical and compact. The spongy mesophyll had highly lobed inter connected cells with wide air chambers. The lateral veins had a small collateral vascular strand comprising of a small cluster of xylem and phloem elements. The vascular strand was surrounded by thin parenchymatous bundle sheath with thick abaxial and narrow adaxial extensions.

FIGURE 3: TS OF THE LAMINA OF BOMBAX MALABARICUM

Venation System: The venation was densely reticulate with narrow, polygonal vein-islet. The boundaries of the islet were thick and straight. Most of the islets lacked vein-terminations. When the termination occurred, it was short, thick and unbranched (Figure 7).

The abaxial epidermal cells were narrow, with straight, thick anticlinal walls. The stomata were dense; they were anomocytic or cyclocytic type i.e. the stoma was surrounded by circle of subsidiary cells (Figure 8). 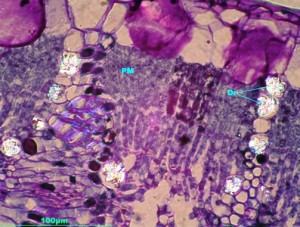 FIGURE 4: TS OF LAMINA OF BOMBAX MALABARICUM UNDER POLARIZED LIGHT 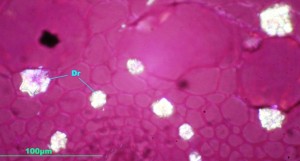 FIGURE 5: TS OF MIDRIB OF BOMBAX MALABARICUM UNDER POLARIZED LIGHT

The stomata were dense; they were anomocytic or cyclocytic type i.e. the stoma was surrounded by circle of subsidiary cells (Figure 8). Glandular trichomes were also frequently seen in the abaxial epidermis. They were short, thick and club-shaped. It consisted of a short, wide stalk and multicellular subspherical body. The gland was 110 µm long and the body of the gland was 60 µm thick. Cuticular striations were prominent on the epidermal cells. 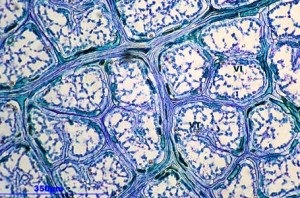 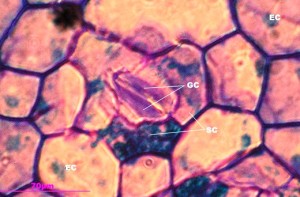 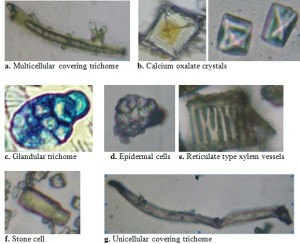 Other Phytochemical Parameters: The results of florescence study were depicted in table 4. The result of effects of different chemical agents of powdered drugs on Bombax malabaricum was displayed in Table 5.

TABLE 4: FLORESCENCE STUDY FOR VARIOUS SOLVENTS HAVING EXTRACT OF LEAVES OF BOMBAX MALABARICUM

Phytochemical Screening: The outcome of the phytochemical screening of the extract showed the presence of carbohydrates, steroids, tannins, triterpenoids, deoxy-sugar, flavonoids and coumarin glycosides.

DISCUSSION: For the last two decades,  interest in herbal drugs have increased tremendously because of various reasons and scientists working with medicinal plants are sincerely trying to rejuvenate several plant drugs  of traditional system of medicine through experimentations using modern tools. It is well known that the pharmacognostical study is one of the most important criteria for identification of plant drugs to work with 15.

Thus, it is evident that the present study would provide various resourceful information in relation to pharmacognostical identification of this plant leaves. Furthermore, information regarding physicochemical characteristics of such plant leaves and nature of chemical constituents present in them would also be useful for standardization of such herbal drugs of folk medicinal practice of present era and enrichment of Ayurvedic Pharmacopoeia.

It would also help scientists to utilize such needful information regarding the plants identity and characteristics in building new poly herbal formulations.