ABSTRACT: The pharmaceutical market of the Russian Federation receives medicines produced both in compliance with the international standards of good manufacturing practice and those coming from developing countries where manufacturers operate according to their national regulations. Asparagus racemosus is a medicinal plant that is widely used in oriental medicine and is included in the Ayurvedic pharmacopeia. The plant, among others contains steroid saponins, isoflavones, and polysaccharides. The roots of Asparagus racemosus are used as a phytoestrogen in disorders of the hormonal system by women. The plant is also known for its antioxidant, immunostimulating, and anti-inflammatory effects. The Russian State Pharmacopoeia (RSP), XIII edition does not include this plant species. However, medicinal plant raw materials (MPRM) and remedies based on them do enter the Russian pharmaceutical market. Therefore, the main objective of this study is to determine the quality and safety of raw Asparagus racemosus. We determinedsuch parameters of quality and safety as: extractive values i.e. alcohol soluble and water soluble; ash values: total ash, ash insoluble in 10% hydrochloric acid (HCl); moisture content value; heavy metals and pesticides residues. The obtained results can be used for quality control of remedies based on the Asparagus racemosus roots.

INTRODUCTION: Pharmaceuticals based on medicinal plant raw materials (MPRM) are widely used to prevent various diseases. Currently, their share of the total number of all registered drugs in the Russian market is around 10%. According to expert forecasts, by 2020, the total demand for phyto-preparations in the Russian healthcare system will increase by 4.8%.

The growing demand for herbal medicines is explained by an increased number of chronic diseases. In chronic diseases, low toxicity and affordability of medicines are of great importance. Herbal medicine as the importance in the traditional system has been used for a thousand years and have made a great contribution to maintain human health 1. This can be achieved only if the herbal drug is evaluated and difficulty in the modern technique of standardization 2.

The most important component of the health care state policy is to ensure quality, effectiveness, and safety of all medicines coming into circulation in the Russian Federation. The impact of anthropogenic factors on the environment has changed the ecological situation in the world, which, in particular, affects the quality of MPRM and remedies based on it.

As a result, additional indicators of MPRM quality related to its safety appeared in the pharmacopeias. It is known that MPRM harvested under various ecological conditions differ in the level of ecotoxicants concentrations (heavy metals (HV), pesticides, etc. HV is one of the most toxic compounds. Extensive investigation (not only assessment of quality, but also safety) of MPRM is very important to pharmaceutical science and practice 3, 4.

Ayurvedic remedies produced from Asparagus racemosus (Shatavari) contain steroid saponins widely used in India. These remedies are included in the Ayurvedic Pharmacopoeia of India (API) as an alternative to hormonal drugs, which are associated with several side effects 5. The plant itself has adaptogenic and anti-inflammatory qualities and stimulates lactation. More recently, these herbal drugs began entering the Russian pharmaceutical market. Due to the lack of regulatory specification, it is necessary to conduct quality control and assess the safety of Asparagus racemosus powdered roots 6. Standardization of herbal formulation is essential to calculate the excellence of drugs, based on the concentration of active principle 7.

The study aims to assess the quality of Asparagus racemosus roots using various methods and to evaluate its safety through indicators such as heavy metals and pesticides. After Standardization of herbal drug further use of these for different types of toxicity study and formulation development.

Determination of Extractive Values: Extractive values of Asparagus racemosus raw material were determined according to method 1of the Russian State Pharmacopoeia (RSP), XIII ed. 8, and the Ayurvedic Pharmacopoeia of India (API) 5. Physicochemical parameter such as loss on drying, ash value, water soluble ash, acid insoluble ash value were carried out according to the method always recommended by world health organization 11.

Purified water and 95% ethanol were used as solvents. Determination of extractive values was carried out according to the guidance presented in the RSP: 1 g (accurate weight) of the crushed roots was placed into 250 ml flask; then, 50 ml of 95% ethanol was added and left for an hour; the flask was heated under reflux for two hours. After cooling, the contents of the flask were carefully shaken and filtered. The obtained filtrate of 25.0 ml was transferred into a dried porcelain cup, and the contents were evaporated in a water bath to dryness. The obtained substance was dried at temperatures between 100 and 105 °C in the loss-on-drying oven until becoming of constant weight. After cooling off in a desiccator, the substance was weighed in. Measurement of the water-soluble extractive values was carried out similarly.

At the same time, the contents of extractive values were determined for all samples using the method described in API. To determine the content of ethanol-soluble extractive values, 5 g (accurate weight) of dried raw powder was macerated with 100 ml of 95% ethanol in a closed flask for 24 hours; frequently shaking during 6 h at 160 rpm/min and allowing standing for 18 h. Losses in the content of the flask were replenished with the same solvent. The contents of the flask were carefully shaken and filtered. 25 ml of the filtrate was evaporated to dryness in a porcelain cup and finally dried at temperatures between 100 and 105°C to constant weight. Finally, after cooling in a desiccator, the substance was weighed. The percentage of water-soluble and ethanol-soluble extractive values was measured in terms of absolutely dry raw materials.

Determination of Moisture Content: The moisture content of the Asparagus racemosus raw material was measured using a moisture analyzer (A&D, MF-50, Japan). The measurements were carried out at the temperature of 105 °C and the standard drying schedules 5td.

Total Ash Values: The total ash content for the Asparagus racemosus raw material was determined using the method described in the RSP, XIII edition, which is also similar to the method presented in the API.

1 g of ground raw material was placed in a porcelain tarred crucible which was weighed to a constant mass. Then each sample was gently heated on an electric heater to combustion. Further, the crucibles were placed in a muffle furnace and calcined at 450 °C to constant weight; then cooled and weighed.

Acid Insoluble Ash Values: Determination of ash content insoluble in 10% HCl for Asparagus racemosus was carried out by the methods described in the RSP, XIII edition, which is similar to the method presented in the API.

The total ash was boiled for 10 min with 25 ml of 10% diluted hydrochloric acid and filtered through an ashless filter. The precipitate filter was rinsed with hot water until a neutral reaction of the washings was performed on a universal indicator paper. The filter wasignitein the porcelain crucible cooled and weighed.

Safety Assessment: Measurement of heavy metals was conducted using atomic absorption spectrometry. A spectrometer Agilent 240Z with a kit for generating hydrides by the “cold vapor” Agilent VGA-77 was used. Analysis of pesticide residues was carried out by gas chromatography-mass spectrometry using the Agilent 7890B chromatograph, USA.

Determination of Heavy Metals and Arsenic: For the raw material of Asparagus racemosus (samples 1-6), measurement of the heavy metals content and arsenic was carried out by atomic absorption spectrometry with electrothermal atomization and the cold vapor method according to the RSP, XIII ed., volume 2, p. 421.

Sample preparation was carried out using the “wet” mineralization method, i.e., the decomposition of a sample in a mixture of inorganic acids under the exposure to microwaves, according to 2d method 2d (Pb, Cd, Hg, As).

The content of organochlorine pesticides (i.e., hexachlorocyclohexane (HCH), hexachlorobenzene (HCB) and dichlorodiphenyltrichloroethane (DDT) was determined for the objects of study.

TABLE 2: INDICATORS OF ASH AND MOISTURE IN RAW ASPARAGUS RACEMOSUS

Determination of Ash Content: Our research has shown that the lowest total content of ash was found in the raw materials (Mumbai, India, 2015), and the largest total content of ash was found in the powdered material (Varanasi, India, 2015). The total ash index for all samples was within the range of the API standards and did not exceed 5%. The numerical index of ash insoluble in 10% HCl for the raw Asparagus racemosus was higher than the API standard (0.5%) by 1.4-3.0 times in 75% of the samples. Results for ash total and ash insoluble in 10% HCl in the Asparagus racemosus raw material are presented in Table 2. 9

Heavy Metal and Arsenic Content: Data analysis showed that Pb content was minimal in the raw Asparagus racemosus grown in Russia (0.147 mg/ kg). In the MPRM collected in 2014, the content of Pb in the samples of raw materials differed by no more than 30% Table 3. The concentration of Hg was 1.8 times higher in raw materials grown in Russia as compared to the MPRM supplied by India.

Close values of Cd content were found in raw materials of a specific manufacturer (Hyderabad) produced in 2014 and 2015 (0.059 and 0.056 mg/kg, respectively). The amount of As did not depend on the year and collection location, which did not allow us to determine certain tendencies 12. In all samples, the content of toxic metals did not exceed the standards established by the RSP, XIII edition. 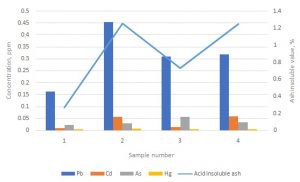 FIG. 1: THE CONTENT OF ASH INSOLUBLE IN 10% HCl AND HEAVY METALS AND ARSENIC IN RAW ASPARAGUS RACEMOSUS

Content of Pesticides in the Raw of Asparagus racemosus: Analysis revealed the existence of organochlorine pesticides in all samples studied Table 4. For 50% of the samples, the level of DDT and its metabolites exceeds the acceptable level in Russia (RSP, XIII edition) by 1.5 times. The ability of this agent to mimic estrogen, i.e., the ability to act as a pseudo estrogen, was discovered in 1950 and described by Rachel Carson in 1962. To date, various studies in this field 10 show that DDT competes with estrogens and other estrogen-like compounds for a receptor. A buildup of xenoestrogens in a body leads to various undesirable consequences, including breast cancer, obesity, and infertility. In this regard, safety control of raw Asparagus racemosus in terms of the DDT levels is particularly important. In the remaining samples, the content of residual pesticides complied with the standards established by Pharmacopoeia. It was found that the content of pesticides in the samples decreased as follows: DDT>HCH> HCB Fig. 2, 3.

TABLE 4: CONTENT OF RESIDUAL PESTICIDES IN ROOTS OF ASPARAGUS RACEMOSUS

CONCLUSION: The set quality and safety parameters of Asparagus racemosus roots have been identified in this study. It is found that moisture, total ash, and extractive values met the requirements of standards. The content of ash insoluble in hydrochloric acid in 75% of the samples studied exceeded the standard established by API. The conducted research for the raw samples of Asparagus racemosus using the methods described in the XIII edition of RSP and the methods described in the API showed good agreement. The maximum extraction of extractive values was obtained using a methodology provided by the RSP, XIII edition when extracted with 95% alcohol (34.7-47.2%) and purified water (58.0-73.7%). However, the relative error of the method described in the API is somewhat lower, which could likely be attributed to the lack of heating in this method. Thus, these methods can be used to standardize raw materials and remedies produced from them, which is necessary for Pharmacopoeial harmonization.

ACKNOWLEDGEMENT: Authors are grateful to Natalia L. Shilina, an employee of the All-Russian Scientific Research of Medicinal and Aromatic Plants (Moscow) for the support to carry out the research work.