The study is aimed at development of physicochemical parameters and to investigate the active principle present in Tridax procumbens Linn. Tridax procumbens Linn. (Asteraceae) commonly known as Coat Buttons is an important plant used against various disorders in indigenous system of medicine such as Wound-Healing, Hepatoprotective, Anti-Inflammatory, Anti-diabetic and Immunomodulatory activities. However its functional properties and the underlying mechanism of action have not been clearly defined, the present study was undertaken to evaluate anthelmintic activity of methanol extract of leaves of Tridax procumbens L. against Pheretima posthuma (earthworm). Various concentrations (10, 20, 30mg/ml) of methanolic extract were evaluated in the bioassay involving determination of time of paralysis (P) and time of death (D) of the worms. Albendazole was used as standard anthelmintic drug and distilled water was used as control. The results of present study indicated that the methanolic extract of leaves of Tridax procumbens showes significantly dose depending pharmacological activity.

INTRODUCTION 1-12: Anthelmintics or antihelminthics are drugs that expelparasitic worms (helminths) from the body, by either stunning or killing them. They may also be called vermifuges (stunning) or vermicides (killing).Anthelmintics are drugs that are used to treat infections with parasitic worms. This includes both flat worms, e.g., flukes and tapeworms and round worms, i.e., nematodes. They are of huge importance for human tropical medicine and for veterinary medicine.

Helminthes infection is the most common infection in man which effect the large proportion of world’s population.In the treatment of parasitic diseases anthelmintics are used indiscriminately.Use of most of these produces toxicity in human beings.

Hence, the discovery and development of new drugs which are derived from plant sources is required which cause less harm to human beings and animals.

An anthelmintic drug may interfere with the parasites' carbohydrate metabolism, inhibit their respiratory enzymes, block their neuromuscular action, or render them susceptible to destruction by the host's macrophages. Drugs used in treating specific helmintic infections include piperazine, pyrantelpamoate, pyrviniumpamoate, mebendazole, niclosamide, hexyl resorcinol, diethylcarbamazine, and thiabendazole. The mechanism of action of most of the anthelmintic drugs like Albendazoleis to causes degenerative alterations in the tegument and intestinal cells of the worm by binding to the colchicine-sensitive site of tubulin, thus inhibiting its polymerization or assembly into micro tubules. The loss of the cytoplasmic microtubules leads to impaired uptake of glucose by the larval and adult stages of the susceptible parasites, and depletes their glycogen stores. Degenerative changes in the endoplasmic reticulum, the mitochondria of the germinal layer, and the subsequent release of lysosomes result in decreased production of adenosine triphosphate (ATP), which is the energy required for the survival of the helminth. Due to diminished energy production, the parasite is immobilized and eventually dies.

Albendazole also has been shown to inhibit the enzyme fumarate reductase, which is helminth-specific. This action may be considered secondary to the effect on the microtubules due to the decreased absorption of glucose. This action occurs in the presence of reduced amounts of nicotinamide-adenine dinucleotide in reduced form (NADH), which is a coenzyme involved in many cellular oxidation-reduction reactions.

Examples of naturally occurring anthelmintics include:

Drug consists of fresh leaves and stems of Tridax procumbens Linn family (Asteraceae). It is a common plant found in tropical areas of all countries, growing primarily during raining season. It is commonly known as ‘Ghamra’ in Hindi and in English popularly called ‘Coat button’ because of appearance of flowers. A spreading annual herb grows up to 20 cm in height. Leaves simple, opposite, serrate or dentate, acute, fleshy and pubescent.

Flowers in head, long stalked and whitish. Seeds are numerous, small with tuft of silky hairs on one side for wind dispersal. Tridax procumbens is used as hepato-protective, anti-inflammatory, immunomodulatory, antidiabetic, hemostatic, antibacterial agent. Tridax procumbens is a species of flowering plant in the daisy family. It is best known as a widespread weedand pest plant. It is native to the tropical America but it has been introduced to tropical, subtropical, and mild temperate regions worldwide.

It is listed as a noxious weed in the United States and has pest status in nine states. Aerial parts of the plant contain sterols, campesterol, stimasterol, β-sitosterol and saturated and unsaturated C12-C22 fatty acids. Flowers contain flavonoids, luteolin, glucoluteolin and quercetin, Terpinene, Terpineol and Pinene. Tridax procumbens Linn., growing in the tropical areas of the Americas, belongs to the Compositae family. It was introduced into China in the 1940s, and has been used in traditional medicine by the native populations to treat bronchitis, dysentery, diarrhoea and to prevent hair loss.

Tridax procumbens is known for several potential therapeutic activities like antiviral, antibiotic efficacies, wound healing activity, insecticidal and anti-inflammatory activity. Some reports from tribal areas in India state that the leaf juice can be used to cure fresh wounds, to stop bleeding, as a hair tonic. In southern Orissa a paste prepared from the whole plant is taken orally to relieve diarrhoea. A fine paste of the leaves is applied externally to reduce swelling of hemorrhoids by the Urash in southern Bihar.

The leaf powder mixed with that of Cicerarietium (fabaceae ,papilionoideae) in a 2:1 ratio is taken orally to treat diabetes among the tribal inhabitants of Udaipur district in Rajasthan leaf jues possess antiseptic, insecticidal and parasiticidal properties and is used externally to stop bleeding from cuts. It is also taken as male aphrodisiac in North eastern. The whole plant and seed being used to treat a variety of ailments the leaves are cooked and eaten as a vegetable. 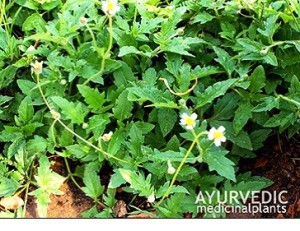 Preparationof Extract for test: The extracts of leaves of Tridax procumbens Linn. were extract were suspended in 2% acacia in normal saline as a vehicle and used for anthelmintic evaluation. The Methanol  extracts of leaves of a Tridax procumbens Linn. were suspended  at 10, 20, 30 mg/ml in 2% acacia in normal saline.

Procedure: Adult Indian earthworms, Pheretima posthuma used to screen anthelmintic activity, due to its anatomical and physiological resemblance with intestinal roundworm parasite of the human being.  Four earthworms of approximately same size (5 to 8cm) were released in to 1ml of desired formulation at room temperature. Each of group is first treated with normal saline solution and then treated with one of the following solution. All the dried extract were suspended in 2% acacia in normal saline as a vehicle and used for anthelmintic evaluation.

The standard Albendazole (10mg/ml) and the test extract i.e. methanol  extract (10, 20, 30 mg/ml) were evaluated for anthelmintic activity. Observations were made for the time taken for paralysis and death of individual worms up to one hour of test period. The paralysis time and lethal time of each different  methanol extract was recorded. Paralysis was said to be occurred when worms did not revive even in normal saline. Death was concluded when worm lost their motility followed with fading away of their body colour. 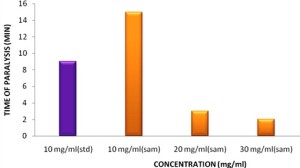 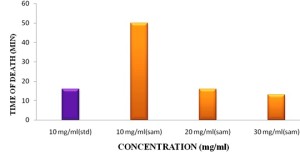