INTRODUCTION: Majority of the people in developing countries still depend on traditional medicinal plants for their health care needs. Generally, plant-based medicines are used in the treatment of many diseases without adverse effects1.

Randia spinosa (Rubiaceae Family) with many medical properties is being used traditionally. It is commonly known as ‘Mainphal’ is a large shrub or small tree up to 9 m height and 90 cm girth, with a bole 2 - 3 m. The plant grows in Brazil, Ceylon, China, East tropical Africa, India, Malaya and Sumatra 2.

According to ethnobotanical survey and traditional systems of medicine such as Ayurveda plant parts of Randia spinosa have great medicinal properties 3. This plant contains carbohydrates, glycosides, proteins and amino acids, saponins, alkaloids, flavonoids and tannins 4. The leaves of Randia spinosa are used in traditional medicine to treat diarrhea and dysentery, gastrointestinal, snake bite, wound healing, inflammation, tumors, piles and skin diseases 2. The Randia spinosa plant extracts exhibited anti-inflammatory, anti-tumor and antimicrobial activity 4, 5. The present investigation was aimed to know the role of ethanol and aqueous extracts of Randia spinosa leaves as antioxidants by DPPH method.

Plant Collection: The leaves of Randia spinosa were collected from remote areas of Karimnagar, Telangana, India, in the month of August 2017. The plant was taxonomically identified by Dr. E. Narasimha Murthy, Department of Botany, Satavahana University, Karimnagar, Telangana.

Preparation of Plant Extracts: The plant material (leaves) was washed with distilled water, Shade dried and pulverized to coarse powder in a mechanical grinder, passed through a 40 mesh sieve. The powdered drug extraction was done with different solvents, ethanol and distilled water individually. A solid was obtained after complete elimination of solvent from plant extracts by rotary evaporator. The obtained extracts were subjected to phytochemical screening and antioxidant activity.

Phytochemical Screening: The phytochemical screening was carried out according to standard procedures for identification of phytoconstituents viz. carbohydrates, glycosides, proteins and amino acids, saponins, alkaloids, steroids, flavonoids and tannins 6, 9.

DPPH Assay: Free radical scavenging activity of different extracts were tested against a methanolic solution of 1, 1-diphenyl-2-picryl hydrazyl (DPPH). Antioxidants react with DPPH and convert it to 1, 1-diphenyl-2-picryl hydrazine Fig. 1. The degree of discoloration indicates the scavenging potential of the antioxidant extract. The change in the absorbance produced at 517nm has been used as a measure of antioxidant activity 10, 11.

A graph was plotted with concentration (μg/ml) on X axis and % scavenging on y axis and IC50 values were calculated, which represents the concentration of the scavenging compound that caused 50% neutralization 10, 11.

Reducing Power Assay: The reducing power (ability) describes how easily one substance can give electrons to another. A powerful reducing agent is keen to donate electrons. This method measures the ability of antioxidants to reduce ferric ion. Reducing power was investigated using the method developed by Oyaizu 12.

Procedure: The samples of different extracts were prepared in various concentrations viz. 250, 500 and 1000 μg/ml in distilled water. 1.25 ml of sample aliquots was mixed with 1.25 ml of sodium phosphate buffer (0.2 M, pH 6.6) and 1.25 ml of 1% potassium ferricyanide (K3Fe(CN)6). The mixtures were incubated at 50 ºC for 20 min. The resulting solution was cooled rapidly, mixed with 1.25 ml of 10% trichloro acetic acid and centrifuged at 3,000 rpm for 10 min. The supernatant (2.5 ml) was taken out and immediately mixed with 2.5 ml of distilled water and 500 μl of 1.0 % ferric chloride (FeCl3) was then added. After incubation for 10 min, the absorbance (abs) against blank was determined at 700 nm. All samples were assayed in triplicate. Ascorbic acid standard was utilized for comparison 12. 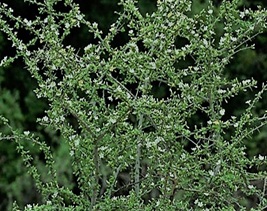 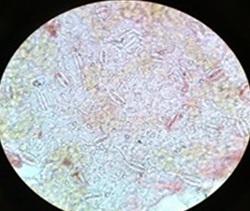 TABLE 4: DETERMINATION OF LOSS ON DRYING

All values in this table represent the mean ±SD (n=3)

All values in this table represent the mean ±SD (n=3) 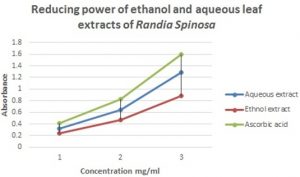 DISCUSSION: Plants are high source of antioxidants due to the presence of some phytochemical constituents like tannins, saponins, terpenoids and flavonoids having the capability to scavenge the free radicals. In the present study, the preliminary phytochemical screening of ethanol and aqueous leaf extracts of Randia spinosa revealed the presence of carbohydrates, glycosides, proteins and amino acids, saponins, alkaloids, flavonoids and tannins.13

Free radicals/ oxidants/ reactive oxygen species (ROS) formed in the human body due to endogenous and exogenous factors are found to be responsible for many diseases 13. The present investigation revealed the importance of phytochemical antioxidants as health benefit factors. This is due to their capability to scavenge the free radicals.

The DPPH method is preferred method because it is fast and reliable. The free radical scavenging activities of extracts depend on the ability of antioxidant compounds to lose hydrogen and the structural conformation of these components 14. The DPPH free radicals after receiving an electron/hydrogen from the antioxidant molecules, become stable diamagnetic molecules 15. Methanolic solution of DPPH (1, 1-diphenyl-2-picrylhydrazyl) free radicals are converted into DPPH-H (1, 1 - diphenyl – 2 - picrylhydrazine) molecules in the presence of an antioxidant agent Fig. 1 16.

CONCLUSION: In this present investigation, the antioxidant ability of plant extracts were determined using DPPH free radical scavenging method and reducing power assay. Finally, it can be concluded that leaves of Randia spinosa have exhibited significant antioxidant activity with the presence of phytochemical constituents that leads to discovering new antioxidant agents in the pharmaceutical field.

ACKNOWLEDGEMENT: We are grateful to Management and Principal of Vaageswari Institute of Pharmaceutical Sciences, Karimnagar, Telangana, India for their support and providing institutional facilities.