To investigate an Ayurvedic compound formulation Phalatrikadi Kvatha (PTK) having seven plant origin drugs for quality control and standardization. This compound formulation is mentioned in Ayurvedic classics for the treatment of Kamala ~ hepatic disorders.  Macroscopy, qualitative phytochemical analysis, extractive values in ethanol and water and thin layer chromatography (TLC) of the formulation was done. Physicochemical parameters include loss on drying, total ash, acid insoluble ash, sulphated ash, alcohol soluble extractive, water soluble extractive and preliminary phytochemical screening of various solvent extract (hexane, chloroform, ethyl acetate, methanol and aqueous). Phytoconstituents such as Tannins, Saponin, Flavonoids, and Steroids were found to be present. Further TLC of Alcoholic extract of Phalatrikadi Kvatha (PTK) was done for proper identification. The qualitative phytochemical and pharmacognostic study of the drug is helpful in sample identification, quality and purity standards of the plant materials. The result of the present study can serves as valuable source of information and provides suitable standards for identification of PTK formulation for future investigation and its application.

INTRODUCTION:There is a global demand for medicines, pharmaceuticals, tonics, cosmetics and other products based on plant materials. Current spurt in the commercial production of these items has put a great pressure on the raw materials. The escalating gap between demand and supply is now fulfilled through all possible means. Majority of crude drugs is collected without any consideration of quality.

The trade in herbal raw materials, though flourishing, lacks efficiency in maintaining the quality of raw material under supply. In a number of cases the part of the plant designated officially is adulterated or even substituted by a different part of the same plant or by that obtained from altogether a different botanical source.

The drug taken from the raw drug market is generally in the form of a dried part of a plant and it becomes difficult to determine the identity of botanical source from which it has been collected due to general lack of knowledge in this regard. Such problems call for proper guiding materials enabling easy and quick determination of genuineness and quality of a particular crude herbal drug.

Methods based on macroscopic, microscopic pharmacognosy and chromatography is available for this purpose. The knowledge of the identity of the plant and major morphological and organoleptic characters of the plant constituting the crude drug may go a long way to solve such problems.  Phaktrikadi kvatha (PTK) is a well-known Ayurvedic dosages form mentioned in various Ayurvedic classics. But the ingredients and indications of PTK formulation are varied in different classics.

In Charaka Samhita and Bhaishajyaratnavali, it is prescribed for Prameha ~ Diabetes 1, 2.

TABLE 1: INGREDIENTS, PARTS AND RATIO OF DRUGS USED FOR THE PREPARATION OF PHALTRIKADI KVATHA

According to WHO authenticity, purity and assay are the three major attributes for standardization and quality control of the herbal medicine 10.

Hence, in the present work to establish botanical and chemical standards like pharmacognostic characterization, physicochemical analysis, preliminary phytochemical testing and thin layer chromatographic analysis of PTK was done which would help for the identification of this important compound formulation prescribed for Kamala ~hepatic disorders.

For the preparation of formulation each ingredient was taken in classically prescribed ratio 5-8 (Fig. 1, 2). 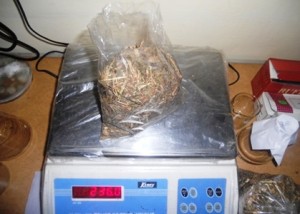 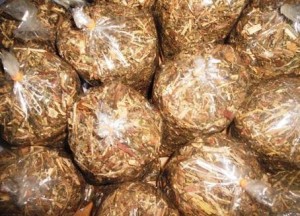 Thin Layer Chromatography: Silica gel (60 F 254) and distilled water were used to prepare a slurry coating materials and aluminium plate was coated by using the spreading device, with a layer about 0.30 mm thick coated plate was then dried and activated in oven for 30 min. a pencil line is drawn near the bottom and two small drops of ethanolic extract was placed separately on it; and the spots were placed to become dry. Plate was placed in chromatographic chamber containing the Toluene: Ethyl acetate: Formic acid, 5:3:0.5 and Rf value were recorded.

Macroscopic Characteristics: Important and specific macroscopic identifying characters of the plant parts used as an ingredient in PTK are as follows:

In raw drug market it is present in as brown to black color pieces of different size (Fig. 3). 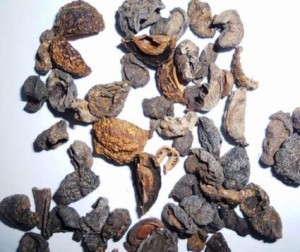 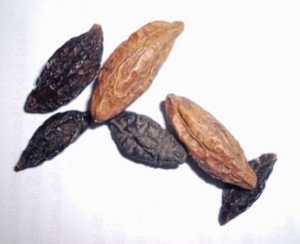 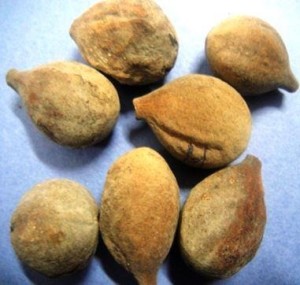 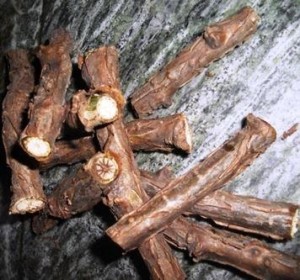 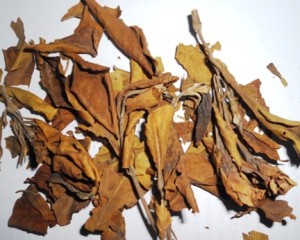 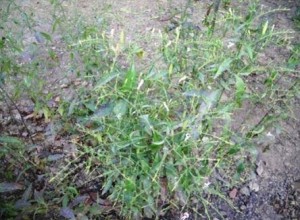 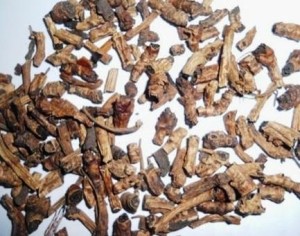 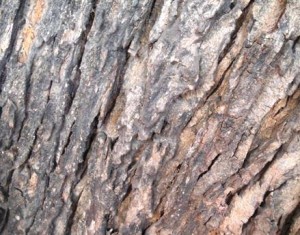 Qualitative Phytochemical Screening: The yield of ethanolic and aqueous extracts was 17.2% and 14.6 % respectively. The extracts revels the presence of flavonoids, saponins, steroid and tannin (Table 3).

TLC: Both the extracts showed five bands of separation (Figure 11). Corresponding Rf values of the bands is presented in Table 4.

DISCUSSION: In recent years, the worldwide interest in medicinal plant products has grown significantly. With an increasing global demand for herbal medicines, it is necessary that the quality and the consistency of these drugs are maintained for their maximal efficacy. These plant based drugs would be much more widely used both nationally and internationally, with wider acceptance, for enhanced health care if the standardization provides creditability to the quality of the medicine used. It becomes imperative, therefore to have quality standards of the raw material used in various plant based products.

Despite the modern techniques, identification and evolution of plant drug by pharmacognostic studies is still more reliable, accurate and inexpensive means. According to World Health Organization the macroscopic and microscopic description of a medicinal plant is the first step towards establishing its identity and purity 12.

The qualitative phytochemical analysis will reveal the chemical nature of the drug and explore the source of pharmacologically active chemical compounds and provide therapeutic diagnostic tools for scientist who wishes to evaluate herbal medicines obtained from indigenous sources 13.

Therefore the present study provide information about the identification, chemical constituents and physiochemical characters of Phaltrikadikvatha, which may be useful for standardization of an important hepatoprotective Ayurvedic formulation.

ACKNOWLEDGMENTS: The author is thankful with core of heart to Dr. V.K. Joshi, Dr. K.N. Diwedi, Dr. Anil Singh, Dr. B. Ram, Dr. Anjali and Dr. Kanhaiya of Department of Dravyaguna B.H.U. for valuable guidance and Dr. Rajesh Tiwari, NBARI and H. CCRAS, Department of Pharmacology, Lucknow, for providing me best facilities and kind support for this research work.