ABSTRACT: Resurgence of public interest in traditional medicine is increasing in both the developing and developed countries. Myristica fragrans belonging to the family Myristicaceae is commonly known as jaifal and even used as home-remedies in the rural parts of the India. The fruit is used as traditional medicine more frequently for the treatment of common ailments of children in rural folklore practices at the place. Work on standardization assumes vital significance. However, no supportive data available on microscopic characteristics and standardization of the same. In this article a study has been made to fix the parameters includes botanical identification, physicochemical analysis, preliminary phytochemical analysis, HPTLC fingerprints profile, microbial screening, aflatoxin and heavy metals in order to ensure the use of only genuine and uniform material of such herbal remedies. The obtained values/ranges can be used as standards for quality control of the drug.

INTRODUCTION: Myristica fragrans Houtt. (Myristicaceae) is a moderate-sized, aromatic, evergreen tree with slender branches and with beautiful appearance. Seeds are oblong, with hard shell is called a nutmeg (Jaiphala). It is cultivated in the hotter parts of India (Konkan, Madras and Karnataka) up to 750 m with a rainfall of 150-300 cm per annum. It is very much found in the forest of Malaya, Penang, Sumatra, Singapore and China1. The ethno botany of nutmeg was studied in the provinces of Maluka and of central and east Java2.

Survey of literature showed that no systematic approaches have been made to study the pharmacognostical parameters of this medicinal plant. The present investigation deals with the studies on some important pharmacognostical characteristics viz. macroscopic, microscopic characters including powder characteristics together with physicochemical parameters, preliminary phytochemical test, HPTLC finger printing, microbial screening, aflatoxin and heavy metals of the seed of  Myristica fragrans as powdered form.

Drug samples were purchased from local market of Chitrakoot (Sample JF1) and Chitrakoot Pharmacy, Arogyadham Parisar, Chitrakoot (Sample JF2). The plant materials were authenticated with the help of Herbarium of Deendayal Research Institute, Chitrakoot, Satna, (M.P.). The plant materials were ground into powder, filtered by sieve 80# and the fine powder so obtained was used for further analysis. The standardization parameters were determined according to the methods detailed in the Ayurvedic Pharmacopoeia of India 8-9. Organoleptic characters and particle size of the both samples were recorded. Quantitative analysis for loss on drying at 105oC, ethanol soluble extractive value, water soluble extractive value, total ash value and acid insoluble ash values were carried out in triplicate in the studied samples. For microscopic analysis preparing slides in water, stained with iodine and mounted with glycerin. Preliminary phytochemical analysis of different extracts was performed by using specific reagents by employing standard procedures10.

HPTLC finger prints profile was determined to assure identity of the drug. For HPTLC Powdered drug (2g) is extracted by heating under reflux for 15 min with 20 ml methanol and boiled for 5 minutes on a water bath at 1050C temperature, filtered the solution and concentrated the filtrate to 5ml. 7µl of this solution were applied to the chromatogram 11. Chromatography was performed on (5x10) aluminum packed silica gel 60F254 HPTLC plate (Merck, Darmstadt, Germany). Before use, the plates were dried in an oven at 105oc for 5 min. and  samples were applied as 9 mm band by means of sample applicator (Camag linomat- 5, Switzerland) equipped with a 100 µl micro Syringe. The developing solvent was allowed to ascend to 90 mm with Tolune: ethyl acetate (9:1) (V/V) as a mobile phase in a Twin Trough Chamber, previously saturated for 20 min by lining with thick Whatman filter paper.

The room temperature was 27o C and relative humidity was 37%. After development of chromatogram, the plates were removed and completely dried in air at room temperature. Observed the spots produced before and after Derivetization with Vanillin-sulphuric acid reagent at day light and ultraviolet light at 254nm and 366nm12. Documented the images by means of photo documentation system (Camag Reprostar 3). Measured and recorded the distance of each spot from the point of its application and calculated the Rf value by dividing the distance travelled by the spots by the distance travelled by the front of the solvent system.

Limit tests for heavy metals, aflatoxins and microbial load were determined according to the methods given in the protocol of CCRAS and WHO guideline 13, 14.

Physicochemical Parameters: Ash of any organic material is composed of their non-volatile inorganic components15. The extraction of any crude drug with a particular solvent yields a solution containing different phytoconstituents. It is useful for the estimation of specific constituents, soluble in that particular solvent used for extraction16. Physicochemical parameters of Myristica fragrans such as total ash, water soluble ash, acid in-soluble ash, loss on drying, ethanol soluble extractive value, and water soluble extractive value were carried out and are summarized on Table 2.

The seed powder was extracted with water and ethanol. These extracts were tested for presence of different phytoconstituents. The results of phytochemical analysis are tabulated in Table 3. Preliminary phytochemical studies revealed the presence of saponin, resin, carbohydrate, terpenoids, steroids and volatile oils.

The results of the microorganisms, aflatoxins and heavy metals were given in Table 5.  The drug was subjected to microbiological evaluation namely for E.coli, Staphylococcus aureus, Salmonella spp., Pseudomonas aeruginosa. All microbial species were found to absent. Total aerobic microbial count and total yeast and mould were found to be within range as per API limits Fig. 4.

The substance known as aflatoxin, is a product of the microbial strain of aspergillus flavus, will produce serious side effects if consumed along with the crude drugs18. In the present study the presence of aflatoxins were determined by chromatographic methods using standard aflatoxins B1, B2, G1, and G2 mixtures. The four application of the aflatoxin solution appeared as four clearly separated blue fluorescent spots at Rf 0.55, 0.44, 0.49 and 0.39 for B1, G1, B2 and G2 respectively Fig. 5. The results showed absence of aflatoxins in the studied samples.

Heavy metal if present in formulations will have a deleterious effect on different organs of body in particular kidneys and leads to renal toxicity 19.

Heavy metals include Arsenic, Lead and Mercury. In the present study these metals were evaluated by means of limit tests where the allowed maximum limits were 3 ppm, 10 ppm, 1 ppm respectively and were found to be absent. The presence of mercury was determined qualitatively and found to be absent. The safe level of heavy metals in the drug suggests it is safe for consumption.

*Values are mean of three determinations. 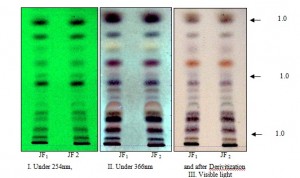 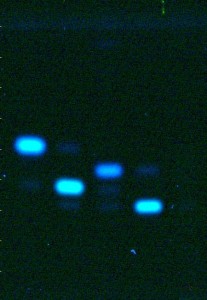 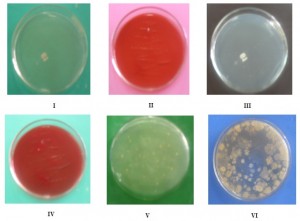 CONCLUSION: Crude drug is the base material for manufacturing of herbal medicines. Efficacy of any drug depends on the genuineness of the raw material used for its preparation. Adulteration of the genuine raw material is the main cause for deterioration of the desired therapeutic effect of a particular drug. The present pharmacogonstic study on two different sample of Myristica fragrans following a series of physicochemical parameters such as total ash, water soluble ash, acid in-soluble ash, ethanol soluble extractive value, water soluble extractive value and loss on drying at 105oC, preliminary phytochemical screening, HPTLC profile and Microscopic identification. These parameters indicate that the drug is potent & authentic. In the present investigation Microbial load, aflatoxins and heavy metals contamination resulted within the permissible limits of the WHO guidelines. So it can be concluded that these parameters are helpful in identification and standardization of the drug. Further Phytochemical and pharmacological studies are suggested.