The paper presents the pharmacognostical studies of leaves of Spinacia oleracea Linn. (Amaranthaceae) commonly known as Palak, a traditional medicinal plant with high nutritional value, used as anti diabetic, anti bacterial and hepatoprotective agent. Extensive literature survey revealed that no reports were available on organoleptic, microscopic and physicochemical properties of Spinacia oleracea Linn. The present study was undertaken to perform pharmacognostical research which can support the identification and characterization of the plant.

INTRODUCTION: A high intake of fruit and vegetables is well known to have positive effects on human health and has been correlated to a decreased risk of most chronic diseases such as cardiovascular disease, diabetes and several forms of cancer1, 2. Spinach has a high nutritional value and is extremely rich in antioxidants, especially when fresh, steamed, or quickly boiled. It is a rich source of vitamin A (lutein), vitamin C, vitamin E, vitamin K, magnesium, manganese, folate, iron. Spinacia oleracea is an edible flowering plant in the family of Amaranthaceae. It is an annual plant (rarely biennial), which grows to a height of up to 30 cm. Spinach may survive over winter in temperate regions 3. Apart from having nutritional value, it has been also credited with various biological activities like virus inhibitor 4, anthelmentic 5, antioxidant, 6 hepatoprotective 7 and reducing risk of breast cancer 8. Our objective was to identify and characterize Spinacia oleracea.

MATERIALS AND METHODS: The Fresh leaves of Spinacia oleracea were collected in the month of February, 2010 from Shirpur, Dist Dhule (M.H.) India. These were identified, and authenticated by the scientists of Botanical Survey of India, Pune, India. A voucher specimen of the leaf itself is deposited in department for future reference. Collected fresh leaves were washed and used for study of organoleptic and microscopic characteristics. The powder of shade dried leaves was used for the determination of ash values, extractive values and phytochemical investigations. All chemicals and reagents used for testing were of analytical grade obtained from SD Fine Chemicals and Loba Chemicals, Mumbai (India).

Micrometry: The measurements of different cells and cell contents were done with the help of calibrated ocular micrometer and MOTIC IMAGES PLUS 2.0 software.

Physicochemical parameters: Percentage of total ash, acid-insoluble ash, water soluble ash and sulphated ash were calculated as per the Indian Pharmacopoeia 11. The total ash of the powdered leaf was tested for different inorganic constituents. Different extracts of the leaves were prepared for the study of extractive values. Fluorescence analysis of powdered leaf was carried out by standard methods 12-13.

Macroscopy: The leaves are alternate, simple, and ovate to triangular-based, too variable in size from about 2-30 cm long and 1-15 cm broad, with larger leaves at the base of the plant and small leaves higher on the flowering stem. Apex was oval in shape, base are symmetrical in shape vein lets are AlterNet. Upper surface of leaf are smooth while lower surface was ruff. 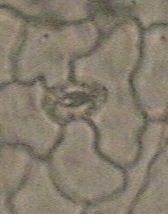 Florescence Analysis: The extracts were prepared by the maceration, further they were treated with various reagent and the color changes were observed under ultra-violet light. All the results are shown in table 5.

DISCUSSION: The pharmacognostical study is one of the major criteria for identification of plant drugs. The present study on pharmacognostical characteristics of Spinacia oleracea leaf will provide useful information for its correct identity. Powder test and extractive value are performed as per stander method; LOD and all the result are in the specific criteria.

CONCLUSION: The current study will serve to become a ready reference for its identification and standardization on the basis of microscopy and chemical analysis. The preliminary phytochemical investigation will further help in isolation of important compounds in future.