The study is aimed at development of Physico-chemical parameters and to investigate the active principle present in Chlorophytum borivilianum.  Chlorophytum borivilianum San. and Fern. (Liliaceae) commonly known as Safed Musli is an important plant used against various disorders in indigenous systems of medicine, such as antioxidant, analgesic, and as a remedy for male impotence and to boost the immune system. This plant is to be considered as an endangered plant due to its potent use in many of the tribal areas in India and used widely in Traditional System of Medicine. Thus from extensive literature survey it was revealed that no reports were available on microscopic evaluation, standardization parameters and chemoprofile of Chlorophytum borivilianum to check the identity and purity of the drug. The present work embodies the investigations carried out to establish methods for quality control of drugs as per WHO guidelines: complete botanical evaluation which comprises of macroscopy, microscopy, physico-chemical parameters like Loss on Drying, Extractive values, Foaming index, Ash values and to investigate the phytochemical present in the extracts in the preliminary level with respect to thin layer chromatography were also carried out for the quality control of the drug. Thus it was thought worthwhile to explore this endangered plant on the basis of its standardization parameters. The study will provide referential information for the correct identification of the crude-drug.

INTRODUCTION: Chlorophytum borivilianum (Liliaceae) commonly called as Safed musli is considered as one of the most important medicinal plant used in our Traditional Systems of Medicines to treat various diseases of human beings. The plant is used for dysuria 1. Leaves are eaten by the tribal people of Western Ghats as an expectorant 2. Root is used as aphrodisiac, diuretic, and astringent useful in dysentery, as an antidiabetic and as appetizing agent 3. Tubers are used as lactogogue 4.

The plant is rich in many pharmaceutical active constituents, mainly glycoside which has been isolated from leaves 5 and roots 6. In view of its diverse medicinal applications, and in order to ensure complete quality of its supply in terms of adulteration and substitution prevailing on the crude drug markets of India, the present communication deals with a complete pharmacognostical evaluation of the roots of Chlorophytum borivilianum. The study includes macro- and microscopical characters, fluorescence analysis of powder, physico-chemical values, preliminary phytochemical screening of different extractives and finally the establishment of a fingerprint profile of the crude drug through thin-layer chromatography for the detection of chemical marker compounds.

Plant Material: The roots of Chlorophytum borivilianum were collected from the Herbal Garden of Jamia Hamdard, New Delhi, in the month of July 2006 and were identified by Dr.P. Jayaraman (Director, PARC), Chennai. The collected roots were washed; shade dried and was pulverized with a mechanical pulverizer for the size reduction. It was then passed through # 60 and the fine powder was collected and was used for the experiment for powder microscopy and preparation of extract. The fresh root sample was used fro the microscopy identification.

Pharmacognostic studies: Morphological studies were carried out by using simple determination technique, the shape, size colour, odour and fracture of the root. Microscopic studies were carried out by preparing a thin hand section of the root of Chlorophytum borivilianum. The section was cleared with alcohol and was stained as per the protocol. Histochemical reactions were applied with concentrated hydrochloric acid and phloroglucinol and were mounted in glycerin for identifiacation of lignified elements, iodine solution for identification of starch grains, ruthenium red for mucilage, 60% sulphuric acid for calcium oxalate crystals and ferric chloride for phenolic compounds in the powdered root by reported methods 7, 8.

Physico- chemical parameters: The parameter was done to evaluate the percentage of Total ash, water soluble ash, acid insoluble ash, sulphated ash were calculated as per Indian Pharmacopoeia 9.  Extract of the powdered stem was prepared with different solvents for the study of extractive value. Flurosecne analysis was also carried out for the powder as well as for different extracts.

Powder Analysis: Preliminary analysis of the powder of root of Chlorophytum borivilianum was carried out with different chemical reagents 10, 11.

Preliminary Phytochemical Analysis: For Preliminary phytochemical analysis, extract was prepared by weighing 1 kg of the dried powdered stem and were subjected to hot successive continuous extraction with different solvents as per the polarity, methanol, hydro alcoholic and finally with aqueous. The extracts were filtered in each step, concentrated and the solvent was removed by rotary evaporator. The extracts were dried over dessicator and the residues were weighed. The presence or absence of the primary and secondary phytoconstituents was detected by usual prescribed methods 12.

Brief taxonomic description of the plant: It is a small tuberous crop, growing up to 1.5ft high and the finger remains in the soil up to 10 inches deep. These fingers are fascicle, sessile, cylindrical, up to 10-12 in number, brown to black skinned and white after peeling, and 3-10 cm long at maturity. The leaves are radical, spirally imbricate at the base, sessile, linear, ovate, acute at the apex and slightly narrowed at the base. The leaves are spread horizontally, their lowered surface is rough and the margins are wavy with parallel venation. The fruit is a loculicidal capsule, green to yellow, almost equal in length and width; the seeds are black in appearance with angular edges.

Macroscopic characters of root: Roots pale brown to white colour with characteristic odour and are tasteless in nature (Fig. 1); light in weight, root tubers are fleshy, fascicied, directly originates from the stem disc devoid of any fibrous structure, cylindrical, 5-20 in number, outer skin is straw colored and white on peeling, and tubers are 10-25 cms X 1-2 cms in diameter.

Microscopic Features: Young roots were selected and cut into suitable length.The thin young roots has radially compressed wavy, narrow rhizodermal layer and an inner layer of much dilated radially oblong hypodermal cells. The outer tangential walls of this hypodermal cell are dome shaped. The cortex is wide and arenchymatous. Large, irregular air spaces are formed by thin partitious. The stele is very thin and hollow. It has numerous exarc xylem strands and phloem strands. Xylem and phloem strands are arranged in radial sequence. Xylem strands have one or two thin walled, angular metaxylem elements and small group of exave protoxylem elements. The pith is wide and parenchymatous. Air chambers are seen in pith also.

In the old root, the rhizodermis is crushed into thin dark layer on the surface. The hypodermal layer is dialated and radially oblong. The cells are 70 µm in radial plane and 40-80 µm in tangential plane. The cortex is wide measuring 1.6 mm in radius. It has wide air chambers in the peripheral zone and more compact large, thin walled parenchyma cells in the inner zone. The stele is wide and hollow. It has distinct endodermis with prominent U-shaped casparian thickenings. Percycle is a single layer of thin walled squarish cells. These are numerous xylem and phloem strands in radial arrangements.

The xylem strand has one or two metaxylem elements and conical group of exave protoxylem points. A thin band of scleranchyma cells interconnect this xylem strands and forms a concentric ring. The pith is wide and parenchymatous. Small air chambers are seen in the pith. The endodermis is 50 µm thick, the metaxylem elements are 40-50 µm wide. In some of the roots, the air chambers are not seen. The cortex has compact thin walled angular parenchyma cells; the pith has circular, less compact parenchyma cells. The stele has distinct endodermis, pericycle, numerous radially arranged xylem and phloem strands. Some of the xylem strands are interconnected by the sclerenchyma bands, while others are discrete and free as shown in Fig 2. 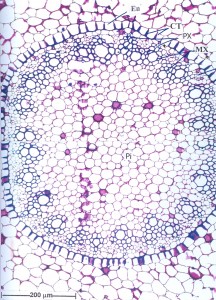 Powder Microscopy: An earthy brown coloured powder with characteristic odour and pungent in taste. For microscopical studies a small amount of powdered tuberous root was stained with phloroglucinol and concentrated hydrochloric acid. It was mounted in glycerin and examined under microscope first with low power (10 X) and then magnified with 45 X. On microscopical examination it shows raphides of calcium oxalate, isolated single stone cells with simple pits on their walls and isolated and combined reticulate vessels were observed in Fig 3. 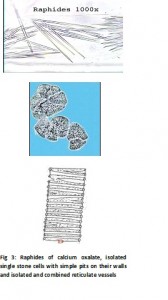 Fluorescence Analysis: The powder was subject to fluorescence analysis as per the standard procedure and shown in Table 1.

Preliminary Phytochemical Analysis: The Methanolic extract was subjected to preliminary phytoconstituents analysis for their presence or absence of the constituents. The results are shown in Table 3.

Now a day the standardization of crude drugs has become very important for identification and authentication of a drug. But due to certain problems the importance was not up to the mark. Thus the lack of standardization techniques fails to identify the drug from its originality which thereby exploits the usage of drug from its Traditional System of Medicine. The plant Chlorophytum borivilianum is used widely from its ancient time for curing many diseases and gives a helping hand to the humans. Thus a perfect protocol was designed for its authentication and identification on the basis of microscopy and chemical analysis. Thus the present investigation was aimed and the results were found to be significant and encouraging towards the goal for standardization.