INTRODUCTION: Atorvastatin (AT) is a synthetic lipid-lowering agent. It is a selective competitive inhibitor of 3-hydroxy- 3-methyl glutaryl coenzyme A reductase (HMG-CoA), which catalyzes the conversion of HMG-CoA to mevalonate, an important rate-limiting step in cholesterol biosynthesis 1. It is used in the treatment of hyperlipidemia 2. It is a substrate for the CYP3A4 isoenzyme. It has shown susceptibility to inhibitors and inducers of CYP3A4 to produce increased or decreased plasma concentrations, respectively 3.

The usage of herbal therapies, along with prescription and Over The Counter (OTC) medications is increasing day by day. Guggulsterone from guggul resin (Commiphora mukul) is a well-known herbal product that has been targeted for its hypolipidemic activity 4. The farnesoid X receptor (FXR) antagonism by guggulsterone has been proposed as a mechanism for its hypolipidemic effect. It inhibits lipogenic enzymes and HMG-CoA reductase in the liver 5. It also increases biliary and fecal excretion of cholesterol 6. Guggulsterone is reported to be more beneficial in reducing blood cholesterol, triglycerides levels, and to reduce the risk of cardiovascular disease without any apparent risk of liver damage 7, 8.

The present work was aimed at studying the pharmacokinetic and pharmacodynamic herb-drug interactions of guggulsterone with atorvastatin in hyperlipidemic rats. The standard cholesterol diet 9 has been successfully used to induce hyper-lipidemia in rats, due to its convenience, reproducibility, and availability.

Experimental Animals: Wistar albino adult male rats weighing 170-200g were purchased from Mahaveer Enterprises, Hyderabad and housed in polypropylene cages in a room where the congenial temperature was 27 ± 1 °C and 12 h light and dark cycles were maintained. The animals were allowed to acclimatize to the environment for 7 days and supplied with a standard pellet diet and water ad libitum. The Institution Animals Ethics Committee (IAEC), Vaagdevi College of Pharmacy, India had approved the experimental protocol (VCOP/2012/ 11/1/S-II/6), and care of animals was taken as per guidelines of CPCSEA, Department of Animal Welfare, and Government of India (1047/ac/07/ CPCSEA). Before induction of hyperlipidemia, the weight of the individual animal and plasma cholesterol levels were estimated. The standard cholesterol diet, along with butter (0.5 ml twice a day) was administered for 30 days to induce hyperlipidemia.

At the end of one month, the blood was withdrawn from retro-orbital sinuses to analyze for lipid profiles (TC, TG, LDL-C and HDLC levels) to confirm the induction of hyperlipidemia 10.

Anti-Hyperlipidemic Studies: The hyperlipidemic rats were divided into six groups of six rats each and dosed as below.

Collection of Blood Samples: On 8th day, blood samples of 0.5 mL were withdrawn at different time intervals through retro-orbital sinus into heparinized Eppendorf tubes at 0, 1, 2, 4, 8, 12 and 24 h and equal amount of saline was administered intraperitoneally to replace blood volume at every blood withdrawal time 12. Plasma was obtained by immediate centrifugation of blood samples using REMIULTRA cooling centrifuge at 3000 rpm for 10 min at room temperature. All samples were stored at -20 °C until analysis.

Preparation of Standard Graph: Stock solution of atorvastatin was prepared by dissolving it in methanol at a concentration of 1 mg/ml. This solution was diluted with methanol to obtain the working standard solutions in the range of 0.05-5 µg/ml. Chromatogram of Blank rat plasma is shown in Fig. 1. Plasma standards were prepared in the range of 0.05-5 µg/ml by taking 100 µl of working standard solutions in a disposable tube, evaporating to residue by heating at 45 ºC. To the residue, 1 ml of pooled untreated plasma was added and mixed in a vortex mixer for 30 sec and used for standard curve preparation. A standard curve was prepared from working plasma standard in the range of 0.005-5 µg/ml.

After extraction of the drug, standard samples were injected into the HPLC system, and peak areas were recorded and plotted against respective known concentrations of plasma atorvastatin to obtain a linear regression line (r2=0.991). 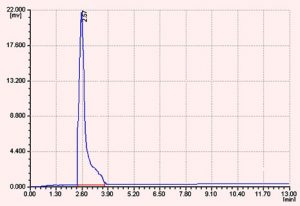 Measurement of Plasma Atorvastatin Concentration: To the plasma sample (100 µl), internal standard (Diclofenac sodium) (20 µl) and methanol (400 µl) was added and vortexed for 1 min. After centrifugation (4000 rpm for 10 min), the supernatant was collected into a fresh eppendroff’s tube and evaporated to dryness and then reconstituted in 0.2 ml of methanol, 20 μl of this was injected into the High-Performance Liquid Chromatography (HPLC) system (Shimadzu LC-10AD) containing SPD-10A VP solvent delivery UV-Visible spectrophotometer detector.

The same extraction procedure was applied for the standard samples as well as those to be assayed for pharmacokinetic analysis 13. The chromatography column was C-18 (Phenomenox, USA; 100A size 250 × 4.60 mm) coated with 0.5 µ silica gel. The mobile phase used was an isocratic solution of acetonitrile: water of 60:40 v/v 14, which was filtered through 0.2-µm nylon filter paper. The flow rate was adjusted to 1 ml/min. The peak was detected at 247 nm. The retentions times of atorvastatin and diclofenac sodium (internal standard) were 6.09, 10.19 min, respectively Fig. 2. 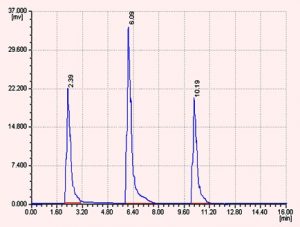 FIG. 2: CHROMATOGRAM OF STANDARD ATORVASTATIN WITH 5μg/ml IN RAT PLASMA 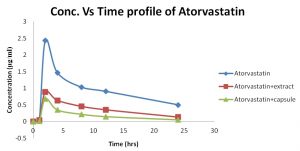 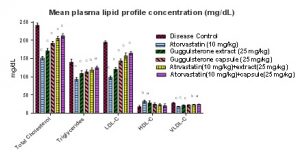 Herb-Drug interactions have both a pharmacokinetic and pharmacodynamic basis, most of which is attributed to the induction or inhibition of hepatic and intestinal microsomal enzymes (primarily cytochrome P450), and drug transporters 19. Although, popular belief about the herbal products is that many of these preparations are considered natural and safe, they require attention for potential risk as they are pharmacologically active. Most of these herbal remedies can interact with allopathic drugs, resulting in altered activity and toxicity.

The present study investigated the pharmacokinetic and pharmacodynamic interactions of atorvastatin with guggulsterone standardized extract and guggulsterone marketed preparation in hyper-lipidemic rats.

The observed peak plasma concen-trations (Cmax) of atorvastatin was 2.43 ± 0.97 µg/ml at 2 h after oral administration on day 8, but in combination with guggulsterone, standardized extract or guggulsterone marketed preparation it was significantly changed to 0.88 ± 0.17, 0.68 ± 0.13 µg/ml (p<0.001) respectively.

The AUC of atorvastatin was significantly decreased to 63.45%, 82.27% when it was combined with guggulsterone standardized extract or guggulsterone marketed preparation.

However, the hypolipidemic effect resulted from the combination therapy was found to be less significant than atorvastatin alone. Thus, it can be suggested that the combination of atorvastatin with guggulsterone has no potential benefits in safety, efficacy, and tolerability than individual drugs.

ACKNOWLEDGEMENT: The authors are thankful to the Principal and Management of Vaagdevi College of pharmacy for providing the necessary facilities.

K. Sirisha *, P. Goverdhan, A. Swarnalatha and A. Sravanthi