ABSTRACT: Pharmacokinetic modeling is the representation of the logarithmic mathematical equations in order to measure the physiologic response of the body to the drug. Absorption, distribution, metabolism and excretion follow drug kinetic principles according to specific reaction mechanisms in which concentration of the drug may either be dependent or independent of drug-body interactions. Michaelis-Menten equation exhibits association between drug concentration and its mass transfer through a kinetics transport mechanism, a principle also known as Fick’s Law of Diffusion. Reaction orders are the sum of the powers of drug concentrations being raised to a certain degree that follows a certain pattern of drug kinetics according to rate laws being established. Reactions between the drug and the body usually follows first and second order rate. First order rate of reaction can be described as drug concentration dependent, whereas, zero order reaction rate can be explained as drug concentration independent. This paper aims to describe the derivation of pharmacokinetic principles acting in multi-compartment model as the drug enters and exits the body using partial differential equations. It explains mathematically the mechanism behind clinical pharmacokinetics through mass diffusivity. Hence, drug-body interactions can be understood mathematically using logarithmic derivations by quantitative response between drug concentration and the human body according to laws governed by each order of reaction.

INTRODUCTION: Pharmacokinetic modeling of the physical function of the body has discovered its global use in the pharmaceutical sciences and clinical pharmacy because it is a comprehensive, principle-based approach leading to a greater knowledge of pharmacodynamic, either therapeutic or toxic effects by quantifying tissue exposure. By attaining this, mathematical modeling of whole body function based on pharmacokinetic equations describe anatomic spaces as fixed volumes with mass transfer between compartments in reference of connectivity of the vascular system and physiologic blood flows.

Each compartment may be further defined by drug-specific terms for tissue elimination, which are dependent on absorption, distribution, metabolism, and excretion processes 1.

The movement through cellular membranes requires action of drugs and its pharmacokinetic mechanisms. The fate of drugs in human system are difficult to determine due to mechanisms by which therapeutic chemicals pass through membranes and the physicochemical characteristics of molecules and membranes that influence this mass transfer. The drug properties that determine its action and accessibility at various action sites are physicochemical features, namely, molecular size and structural features, ionization degree, relative lipid solubility of its ionized and non-ionized forms, and its affinity to serum and tissue proteins. Majority of the cases, a drug must cross the many cellular plasma membranes to reach its target of action. Although there are encountered problems to the drug actions in either single layer or several layers of cells and linked extracellular protein, the plasma membrane blocks many drug distribution processes 2, 12.

In which Vmax indicates the maximum rate of transport (substrate flux) and is equivalent to the density of carriers on the cellular membrane, and Km serves as the Michaelis constant, which acts in concentration of drugs at which the flux is 50% of the Vmax value. From the intermediate complex, Km shows an estimation of the dissociation constant to its substrate. In comparing drug concentration, C, with the Km value, the flux is augmented consistent to the drug concentration (approximately linear with drug concentration) 2, 11.

After drug administration, the therapeutic chemical is fated to a series of pharmacokinetic mechanisms in which the rate illustrates the drug concentration in the indefinable domain known as ‘’target of action.’’ These ADME processes influence several pharmacological variables, namely, the onset of action, duration and intensity of therapeutic response. Learning these rate principles is essential for a better understanding of the monitored pharmacological activity f the administered drug 4, 6, 7, 8, 13.

Zero-order processes can be applied and utilized in several pharmaceutical practices which include hospital application for intravenous infusion, drug synthesis and formulation using controlled release dosage forms as its model and drug administration through transdermal drug delivery systems 4, 6, 7, 8.

First-order elimination is highly important in pharmacokinetics since the majority of therapeutic drugs are cleared by this process. The drug clearance is commonly called ‘’biological half-life’’ of a drug. At a time after a drug is given, when equilibrium has been reached, parameters such as the time (h, min, day, etc.) at which the mass (or amount) of unchanged drug becomes half (or 50%) of the initial mass of drug define biological half-life 4, 6, 7, 8.

The enzymatic process for drug biotransformation may be explained by the equation below:

in which E indicates the enzyme and C stands for drug concentration. In order to yield a drug-enzyme intermediate, the drug interacts with an enzyme. Then, a metabolite is generated when the formed intermediate complex is further processed, upon the liberation of the enzyme. The liberated enzyme travels back to interact again with more drug molecules. The drug product concentration at a specific rate of time is equal to the product of third rate constant (K3) and the intermediate complex, which is now designated as v, or the transport rate. This equation is expressed below:

Upon rearrangement, the equation is expressed as:

Since, the process of enzymatic metabolism of drugs can be depicted by the equation below:

Upon rearrangement, the equation above is expressed as:

Let Km (Michaelis constant) be the new constant for the equation below:

Hence, upon incorporation of the new constant, the developed equation is depicted as:

Upon rearrangement, Michaelis-Menten equation is formed and shown below: 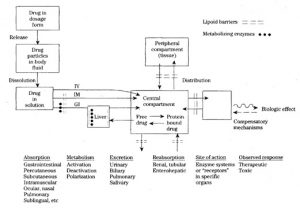 For zero-order reaction, if the amount of drug A is decreasing at a constant time interval t, then the rate of disappearance of drug A is expressed as 5, 9:

Upon rearrangement leading to integration, the equation is now expressed as 5, 9:

Upon integration, the reaction yields to 5, 9: 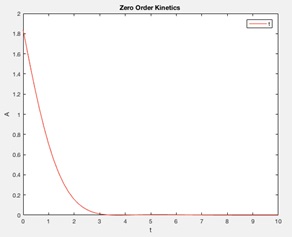 Upon rearrangement for integration, the reaction is now depicted as 5, 9:

After integration, the equation generates to 5, 9:

Upon rearrangement and substitution of values, the known equation is formed and is expressed as 5:

Thus, if the equation is plotted as A versus t, the graph is exhibited in Fig.3. The graph below shows a linear relationship after deriving the first order reaction by the logarithm of drug concentration against time. Hence, constant fraction of drug is excreted per unit time. Thus, half-life is constant regardless of the concentration of drug. Therefore, the linearity of the graph illustrates the proportionality between the elimination rate and drug concentration. 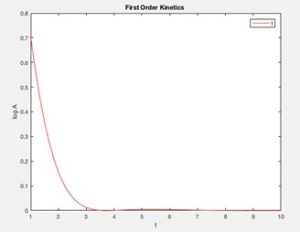 The half-life (t1/2) is the time it takes for the plasma concentration to be reduced by 50%. Since it follows the first order reaction, the primary equation for half-life is shown below:

This equation is integrated and rearranged as depicted below 5, 9:

Upon integration, half-life is obtained by the following equations 5, 9:

Multi-compartment pharmacokinetic model is the development of mathematical method to explain the relationship of drug concentration in various compartments versus time. First and second order reactions follow the same general formula, hence, arriving at the same concentration plot (negative slope) after its mathematical integration. Elimination half-life can also be derived from the same general formula of first order reaction, since t1/2 is observed in this kind of order. Michaelis-menten equation can be derived from the enzymatic process of drug metabolism. Hence, the mentioned principles are aligned with human reactions through mathematical development. This research suggests for application in formulation of various dosage forms. In addition to that, included principles may be used in clinical monitoring of patients. Furthermore, other theories may also be studied for possible development of equation.

ACKNOWLEDGEMENTS: This study would like to recognize the efforts done by my professors in teaching various subject disciplines.