INTRODUCTION: Secnidazole, (1-(2-methyl-5-nitroimidazole-1-yl)propane-2-ol), is a long-acting 5-nitroimidazole derivative Fig. 1 is used in the treatment of amebiasis, giardiasis, trichomoniasis and anaerobic bacterial infections 1. It is used widely in the treatment of female genital infections 2, 3, 4. It is observed that patients suffering from intestinal amoebiasis or giardiasis, clinical or parasitological, are cured 80% to 100% after treatment with 2 g of Secnidazole 5. It is a high dose. It may be true that cure rate with such a high dose is high, but it also has larger side effects including dizziness, abdominal pain, urticaria, glossitis, stomatitis, taste disturbances, and paresthesis.

Secnidazole induced acute pancreatitis has been reported in the literature after a single dose administration 6. Piperine Fig. 1 is a bioactive principal obtained from Piper nigrum and Piper longum (black paper) 7, 8.

The powder of black paper is used as a food additive in several countries 9, 10. It has several properties such as antioxidant 11, anti-inflammatory 12, antihypertensive 13 and hepatoprotective action 14. In the past several years it has generated considerable interest due to its bioenhancing effect and low toxicity in animals and humans. In this paper synthesis and pharmacokinetic properties of piperine, derivative are reported 15. This is the first such report wherein the derivative of piperine was synthesized and studied for its bioenhancing effect. We report here, the scheme of synthesis, characterization of a synthetic derivative of piperine. The pharmacokinetic comparison of Secnidazole alone and after co-administration with piperine and the synthesized derivative is also reported. This is the first such study where the effect of different amide substituent in piperine and its effect on the pharmacokinetics of Secnidazole reported. 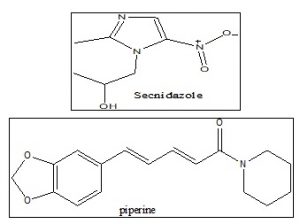 FIG. 1: STRUCTURES OF SECNIDAZOLE AND PIPERINE

Chemicals and Reagents: All reagents and chemicals were obtained from Aldrich Chemical Company. HPLC grade chemicals and reagents were used for HPLC analyses. They were purchased from Merck Specialities Pvt. Ltd., India. All the solvents used in reactions were distilled and dried before use. All reactions were monitored by TLC on 0.25 mm silica gel plates coated on the aluminum sheet (Merck). For vacuum evaporation rotavac of Kika Werke, HB4, Germany was used. IR spectra were recorded on JASCO, V-530 FTIR as potassium bromide pellets. 1H and 13C NMR spectra were recorded on Bruker spectrometer operating at 400 MHz and 100 MHz respectively with TMS as the reference standard. DMSO was used as the solvent; chemical shifts are reported in δ values. Mass spectra were recorded on 410 Prostar Binary LC with 500 MS IT PDA detectors, Varian Inc. with (-) ESI mode.

Preparation of Piperic Acid from Piperine: To piperine (1g, 0.35 mmol), 20 ml of 20% ethanolic KOH was added and refluxed for 48 h. The completion of the reaction was monitored by TLC using mobile phase n-hexane: ethyl acetate (7:3 v/v). After completion of the reaction, ethanol was removed under reduced pressure to give yellow colored solid. This solid was dissolved in 20 ml of 10% sodium bicarbonate solution and shaken for 15 min. It was filtered, and the filtrate was acidified with conc. HCl (drop by drop) yielding a yellowish precipitate of piperic acid. This precipitate was filtered under mild vacuum and recrystallized from methanol (15 ml) to give yellow needles of pure piperic acid (750 mg, 75% yield), m.p. 216 ºC (Lit. 217-218 ºC) Fig. 2 16. 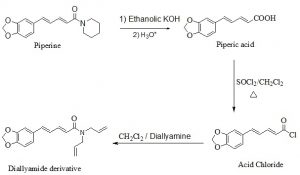 FIG. 2: SYNTHETIC SCHEME FOR PREPARATION OF DIALLYLAMIDE DERIVATIVE FROM PIPERINE

Instrumentation and Chromatographic Conditions: Analysis was performed on HPLC system consisting of a pump (model Jasco PU-2080 plus PU- 2087 plus intelligent LC pumps) with autosampler injector. The detector used was UV (Jasco UV-2075 plus). The software was Jasco-Borwin version 15, LC-NET II/ADC. The column was Thermo hypersil GOLD C18 (250 × 4.6 mm, i.d., 5 μm) Thermo Technologies Corporation, Japan, protected with a Phenomenex C18 guard column. Before analysis, the mobile phase was filtered through a 0.22 μm filter and then degassed ultra-sonically for 30 min. The analyses were conducted at a flow rate of 1.0 mL/min, and the detection wavelength was 337 nm and the run time was about 25 min Table 1.

Pharmacokinetics Studies: Wistar male rats weighing 270-300 g were purchased from the National Institute of Biosciences, Sinhgad Road, and Pune-51. During the experiment, rats were housed in standard housing conditions like the temperature of 25 ± 1 ºC, relative humidity of 45% -55% and 12h light: 12 h dark cycle. The experiments started after the animals were acclimatized for two weeks. They had free access to food pellets (Nav-Maharashtra Chakan Oil Mill Ltd., Sangali, Maharashtra, India) and tap water during the experiment. The animal facilities of the Department of Pharmacology at Poona College of Pharmacy are approved by the committee for purpose of control and supervision of experiments on animals.

The pharmacokinetic study protocols were approved by the Institutional Animal Ethics Committee (IAEC) of Poona College of Pharmacy, Pune (CPCSEA/PCT03/2016-2017).

Before initiating the pharmacokinetic study, animals fasted overnight. Seven groups were formed; each group contained 9 rats (n=9) 18. For oral administration, the suspension of Secnidazole was prepared in water (10 mg/ml/rat) and suspension of piperine and DA was prepared in water (10 mg/ml/rat). After administration, about 1 ml blood sample was collected from each rat at a time interval of 0, 0.25, 0.5, 1, 2, 4, 6, 8, 12 h respectively by a retro-orbital puncture (ROP) and transferred into labeled tubes containing Ca-EDTA and shaken gently to prevent coagulation. The blood samples were collected then centrifuged at 10000 rpm for 10 min at 4 °C. Until the assay; the plasma samples were kept in the deep freezer at -78°C.

Preparation of Plasma Sample: Rat plasma, 200μl was transferred into a 1.5 ml Eppendorf tube. To this 200 μl of the precipitating agent was added (100% ACN) and vortexed for 5 min and the mixture was centrifuged at 10000 rpm for 20 min. The supernatant layer was transferred into another tube and reconstituted with 200 μl diluent and vortexed for 1 min. This was filtered through a 0.2μ syringe filter. A 20 μl of the filtered solution was injected onto the HPLC column 19, 20, 21.

Method Validation: The method validation was performed according to the United States Food and Drug Administration (USFDA) guidelines.

Selectivity: A selectivity study was designed to find out whether constituents and other substances existing in samples would interfere with the detection of Secnidazole and piperine. Selectivity was studied by comparing the chromatograms of six different batches of rat blank plasma with the corresponding spiked plasma.

Precision: The intra-day and inter-day precisions and accuracies of rat plasmas were evaluated at three concentrations (2, 6 and 10 μg/mL). The results are summarized in Table 2. At all levels, the accuracy with a CV less than 20% was obtained indicating that the method is reliable and reproducible for determination of Secnidazole and DA in rat plasma.

Stability was assessed by comparing the freshly spiked quality control samples. The concentration changes related to the nominal concentration were less than 20%, indicating no significant substance loss during the storage Table 4.

TABLE 2: THE INTRA- AND INTER-DAY PRECISIONS AND ACCURACIES OF SECNIDAZOLE IN RAT PLASMA

TABLE 4: RESULTS OF SHORT-TERM STABILITY AND FREEZE–THAW CYCLES OF SECNIDAZOLE IN RAT PLASMA

Analysis of Plasma Samples: The plasma samples were analyzed by the developed and validated HPLC method. Cmax and Tmax were obtained by extrapolating the AUC value in the linearity graph of Secnidazole and DA Table 5. Average area under the curve (AUC) was calculated and a graph of average AUC v/s time interval was plotted Fig. 7. Table 5 Pharmacokinetic parameters following oral administration of Secnidazole alone and in combination with piperine and piperine DA respectively.

The diallylamide substitution (DA) showed a considerable increase in AUC and Cmax of Secnidazole compared to Secnidazole alone and after co-administered with piperine and alone. 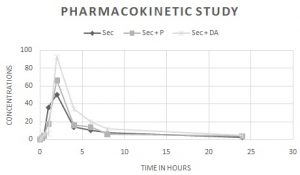 FIG. 7: MEAN PLASMA CONCENTRATION-TIME CURVES OF SECNIDAZOLE ALONE AND IN COMBINATION WITH PIPERINE

Mean residence time (MRT), the volume of distribution (Vd) and clearance (Cl/F) were also calculated. The peak plasma concentration (Cmax) and the time for reaching Cmax (Tmax) were obtained directly from the experimental data.

Statistical Analysis: Plasma drug concentrations, as well as the pharmacokinetic parameters before and after piperine administration, were compared by paired Student’s t-test. A value of p<0.05 was considered statistically significant.

CONCLUSION: Piperine is a widely used bioenhancer and shows bio-enhancing property on many drugs. It was selected as bioenhancer for the present work, and its diallyl amide derivative was prepared to compare the bio-enhancing effect with piperine. The pharmacokinetic study demonstrated that piperine did increase the Secnidazole concentration in plasma, retarded its clearance and increases the volume of distribution. However, the diallylamide (DA) derivative was much superior to piperine for this parameter.

ACKNOWLEDGEMENT: We would like to acknowledge Sunpure Extracts Pvt. Ltd., Delhi for providing gift sample of piperine.

CONFLICT OF INTEREST: All authors declare that they have no conflict of interest.