PHARMACOLOGICAL ACTIVITIES OF MUNTINGIA CALABURA: AN OVERVIEW OF THE LAST LUSTRUM

PHARMACOLOGICAL ACTIVITIES OF MUNTINGIA CALABURA: AN OVERVIEW OF THE LAST LUSTRUM

ABSTRACT: Background: In honor of a dutch botanist, Abraham Munting, the tree was named Muntigia calabura L. The Jamaica cherry, M. calabura is a shrub or tree which is native to Jamaica, Brazil, Mexico, and North America. M. calabura is a well-known, fast-growing tree clasped with different medicinal and health benefits. Different parts of the tree are being used for various ailments in different parts of the world. Objective: To summarize updated information regarding the pharmacological activities of Muntingia calabura L. Materials and Method: Few databases like Google Scholar, Science Direct, and Pub Med were used for the literature survey. Google and Bing search also carried out using the common and scientific names of the plant as keywords. For reviewing, articles that are related to ecology and agriculture are excluded. And articles that were not in the English language were also excluded. Results: Above mentioned search engines yielded 47 articles. Among them, 17 articles which were published between 2015 and 2019 were selected for inclusion in this review. From the literature survey, we found that M. calabura contains significant pharmacological properties like antinociceptive, antiulcer, anticancer, antispasmodic, antihyperuricemic, hepatoprotective, antidiabetic activity. Conclusion: It is evident from the literature that M. calabura possesses a significant medicinal property and requires further and in-depth research. This review is therefore intended to give baseline information for future researchers.

INTRODUCTION: Plants are the primary source of food and a long-ago human had started experimenting on them for treating ailments 1, and there is a significant role of traditional medicine on the human healthcare system 2 which is dependent on nature and natural products 3.

Since trees and plants are the basis for medical treatments through much of human history, there are now many ways to discover novel bioactive compounds. A huge amount of plants having medicinal value required to be thoroughly studied for their potential medicinal values. Among them, the plant Muntingia calabura Linn. which belongs to the family Elaeocarpaceae, is the one that lately acquired medicinal plant status.

Muntingia calabura is renowned as ''Jamaican cherry'' worldwide and ‘‘kerukupsiam’’ in Malaysia. M. calabura is indigenous to tropical South America, southern Mexico, Central parts of America, Trinidad, and Argentina. It is commonly grown in hot regions of the Philippines, India, Indonesia, and Malaysia where it is widely grown as roadside shrub 4. In this review, we made an attempt to summarize updated information regarding the pharmacological activities of Muntingia calabura L. 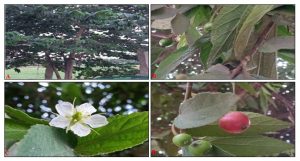 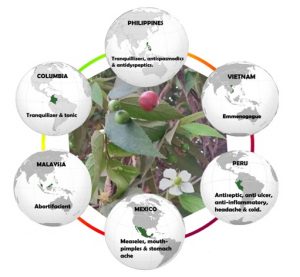 Pharmacological Studies: Several scientific studies were conducted to reveal the different pharmacological potential of Muntingia calabura. Various parts of the tree were demonstrated to exert cardioprotection, gastroprotection, anticancer, antihypertensive, antipyretic, antinociceptive, anti-bacterial, anti-inflammatory, antidiabetic, anti-oxidant and anti-bacterial. Many of these pharmacological investigations have been carried out on different parts of this tree to formalize the plant's ethnomedical uses in traditional medicine. Some experimentally demonstrated the pharmacological significance of different parts of Muntingia calabura tree were outlined in detail in the following section.

1. Anti-inflammatory: Lin et al., (2017) had attempted to delineate the molecular mechanism by how ethanol extract of Muntingia calabura fruit exerts an anti-inflammatory effect against lip polysaccharide induced pro-inflammatory mediators in RAW264.7 murine macrophage cell lines. The researchers at first had conducted a phytochemical analysis of the fruit extract, and the report revealed to contain 4 flavonoids and 11 phenolic acids wherein they found gallic acid in a significant amount. Later they had reported the levels of nitrate, PGE2 and pro-inflammatory cytokines like Tumor Necrosis Factor-α (TNF-α), Interleukins-1ß (IL-1ß) and Interleukins-6 (IL6) production in lipo-polysaccharide (LPsac) stimulated RAW264.7 cells which were in large amount and pretreatment with test extract had down-regulated the LPsac-induced pro-inflammatory mediators. Researchers had reported that elevated levels of cyclooxygenase-2 (COX-2) and inducible nitric oxide synthase (iNOS) in LPsac stimulated RAW264.7 cells were down-regulated by pretreatment with fruit extract in a concentration-dependent manner and production of NO and PGE2 were also subsided. They also had reported the suppression of nuclear translocation factor erythroid 2 (NFE2)-related factor 2 (Nrf2) and heme oxygenase-1 (HO-1) in LPS stimulated RAW264.7 cells by up-regulation caused by pretreatment with the fruit extract and via Nrf2/HO-1 signaling mechanism 6.

1. Antihyperuricemic Activity: Safrida S. and Sabri M. (2019) had investigated the anti-hyperuricemic potential of ethanol extract Muntingia calabura bark in adult diabetic male Wistar rats. The researchers investigated the effect of bark extract on body weight and body mass index and reported that treatment with bark extract had lowered body weight but not body mass index of diabetic rats. They reported the effect of different doses of the bark extract on serum uric acid levels in alloxan intoxicated rats and concluded that a dosage of 300 mg/kg had remarkably diminished the level of uric acid 7.

1. Antispasmodic Activity: The only attempt made to study the antispasmodic potential of aqueous extract of Muntingia calabura flowers on New Zealand white rabbits was made by Vadivel et al. (2017). In this research, researchers at first had subjected the flower extract to a series of chemical tests for phytochemical analysis and reports revealed to possess carbohydrates, flavonoids, glycosides, phenolic compounds, and saponins. Later, they had evaluated the effect of test extract on rabbit's jejunum and reported to produce concentration-dependent inhibition of the spon-taneous contractions of the experimental rabbit’s jejunum, which was equivalent to that of reference drug, verapamil 8.

1. Hepatoprotective Activity: Rofiee M. S. et al. (2015) had reported the mechanism by how M. calabura leaves methanol extract to exert hepatoprotection in male Sprague Dawley rats. The researchers had conducted the phytochemical analysis of M. calabura leaves and report revealed to contain flavonoids, tannins, triterpenes and steroids. Before finding out the mechanism involved in hepatoprotection, they had reported the hepato-protective effect of the extract in carbon tetrachloride (CCl4) intoxicated animals where they had found no reduction in body weight in animals pre-challenged with test compared to silymarin, which was used as standard drug. To discover the mechanism of hepatoprotection, they had conducted a metabolomics study of serum samples of the experimental animals and their reports revealed that, by the synthesis of bile acids and metabolism of arachidonic acid the test extract had shown hepatoprotection 9. 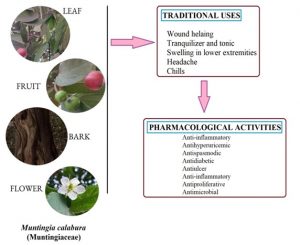 Also, they had described the indirect relationship of IL-6 production and the number between insulin-producing pancreatic islet cells. The reports revealed that the administration of test extract caused a significant reduction in blood glucose levels of hyperglycemic mice and possibly due to the suppressive it on IL-6 production from CD68 cells 11.

3. Antiulcer Activity: Zakaria et al. (2016) reported in-vivo gastroprotective potential of M. calabura leaves chloroform extract in Sprague-Dawley rats. They subjected the test extract to phytochemical screening and the report revealed the presence of tannins, triterpenes, and steroids in leaves. Later they carried out HPLC analysis for further identification of phytochemicals present and reported the presence of flavonoids in leaves.

Through UHPLC-ESI analysis, authors reported 22 phenolic compounds. By next, they had conducted pylorus ligation ulcer model where the extract showed significant gastroprotection but reported little less activity than standard drug, Ranitidine (100 mg/kg). Also, they determined the effect of ethyl acetate fraction on gastric juice and reported a remarkable reduction in the volume of gastric secretion, total and free acidity at doses 250 and 500 mg/kg but, the dose 100 mg/kg failed to decrease total and free acidity.

Also, they made an attempt to establish the role of nitrous oxide (NO) and sulfhydryls (SH) in the mechanism of gastroprotection of ethyl acetate fraction by pre-treating the animals with N-ethylmaleimide (NEM) and NG-nitro-L-arginine methyl ester (L-NAME) cause aggravating the gastric lesions which diminished the gas-troprotection exerted by ethyl acetate and reported that NO and SH participate in mucosal protection.

Halim et al., (2017), made an attempt to evaluate the synergistic gastroprotection property of Melastoma malabathricum and Muntingia calabura leaf methanolic extract (MMMCL) on male Sprague-Dawley rats. They, at first, tested the in vitro antioxidant activity of MMMCL taken in different ratios of 1:1, 1:3 and, 3:1 by DPPH radical scavenging assay, Total phenolic content, and Oxygen radical absorbance capacity and reported that 200 mg/kg concentration at the ratio 1:1 possesses highest antioxidant activity. Later, they determined the effect of MMMCL taken at various ratios on ethanol intoxicated experimental animals and reported that in a dose-dependent manner, all doses of MMMCL taken at 1:1 and 3:1 ratios exerted significant gastroprotection 15.

4. Anti-inflammatory Activity: N. Jisha et al., (2019) published a research study on the anti-inflammatory potential of Muntingia calabura leaves methanol extract on female Wistar rats. They subjected the test extract for toxicity studies, and the reports revealed that no symptoms of toxicity observed up to a dosage of 2000 mg/kg body weight. The researchers estimated carrageenan reactive protein levels (CRPL) in blood and reported that the treatment with extract shows less CRPL than carrageenan alone treated groups. Here, indomethacin is used as a reference standard. Also, they reported that carrageenan-induced histological alterations like inflammatory cell infiltration, epidermal edema, proliferated collagen, and proliferated epithelium were normalized by test extract treatment 16.

5. Antiproliferative Activity: Nasir et al., (2017) investigated the anti-colon cancer effect of the leaf of Muntingia calabura methanol extract on azoxymethane (AOM) produced colon cancer in male Sprague Dawley rats. This is the first research study made on the anti-colon cancer property on Muntingia calabura. Researchers at first subjected leaf samples to HPLC analysis, and the presence of Rutin is reported, which is known to cause anti-inflammatory, antioxidant, and anti-colon cancer activity. Also, they subjected the extract to UHPLC-ESI-MS analysis, and the presence of several flavonoids like ferulic acid, pinocembrin, and gallic acid was reported, which are known to exhibit the anticancer property 17.

6. Antimicrobial Activity: William et al., (2016) made an attempt to study the antibacterial and antifungal properties of the Muntingia calabura ethanol extract leaf and stem using the disc diffusion assay. Bacteria like Escherichia coli, Staphylococcus aureus, Pseudomonas aeruginosa, Salmonella typhimurium, Bacillus subtilis, and fungus-like Candida albicans were the test organisms used in their study. At first, the researchers subjected the test extract to the phytochemical analysis, which showed the presence of sterols, flavonoids, alkaloids, saponins, glycosides, and tannins and the absence of tri-terpenes. The stem extract was found to possess triterpenes, but alkaloids and sterols were absent. By next, they conducted antimicrobial assay where the minimum inhibitory concentration (MIC) of leaf extract was analyzed against all the experimental microbes. The result showed a very low MIC value of leaf extract towards C. albicans, meaning; the extract exerted a strong antimicrobial effect, and the stem extract exerted a significant antimicrobial effect against S. aureus. Both stem and leaf extracts were found ineffective against E. coli 18.

Zakaria et al. (2019) in the same year, made a second attempt to report the anti-hepatotoxic potential of leaves of Muntingia calabura methanol extract in CCl4 induced hepatotoxic male Sprague Dawley rats. The researchers reported a decrement in elevated liver weight/body weight ratio (LW/BW) upon pretreatment with leaf extract in a dose-dependent manner.

CONCLUSION: In order to prove the healing potential of a plant, reports from experimental research are required. Several research studies are going on from the past three decades to test traditionally used medicinal plants against common diseases and disorders globally. In regard to Muntingia calabura, all parts of this tree, namely, bark, leaf, flower, and fruit, have significant pharmacological properties. In conclusion, we hope this review encourages researchers to discover new therapeutical lead molecules by investigating the potential pharmacological properties of Muntingia calabura.

ACKNOWLEDGEMENT: The authors thank to the Department of Pharmacology, Krupanidhi of Pharmacy, Bengaluru, for providing the facilities to carry out this study.