PHARMACOLOGICAL AND PHYTOCHEMICAL EVALUATION OF ANTI-ULCEROGENIC POTENTIAL OF SOLANUM NIGRUM

PHARMACOLOGICAL AND PHYTOCHEMICAL EVALUATION OF ANTI-ULCEROGENIC POTENTIAL OF SOLANUM NIGRUM

Anti-ulcer activity of the Solanum nigrum     L. extracts was studied in rats by using pylorus ligated ulcer model. Rantidine was used as the standard drug for comparison. The animals were sacrificed after 19 hrs after the ligation. Stomach was dissected out and contents were drained into tubes and were centrifuged at 1000 rpm for 10min and volume was noted. The PH of gastric juice was recorded using a PH meter. The contents were subjected for analysis of free and total acidity. The numbers of ulcers per stomach was noted and severity of ulcers scored. Then the blood samples were collected and subjected to estimation of serum calcium and alkaline phosphatase level. The results revealed that 200 and 400mg/kg dosages of Solanum leaf extracts showed significantly comparable anti ulcer-activity as that of Rantidine, showing an anti-ulcer activity of the extracts. Thus Solanum nigrum leaves may reduce the acidity of the gastric juice and also prevent the mucosal damage and ulcer formation.

INTRODUCTION: Peptic ulcers are open sores in the lining of stomach, esophagus, or duodenum. Peptic ulcer is one of the most common gastrointestinal disorders, causing high rate of morbidity. Ulcers are not caused by spicy food or stress 1 but it is caused by a type of bacteria called Helicobacter pylori. At least 70-90% of patients with gastric ulcers and 80-95% with duodenal ulcers are infected by H. pylori Microorganism which seems to be curative for the disease.

Several other causative factors are implicated in the pathogenesis of gastric ulcer including increased acid-pepsin secretion, impaired bicarbonate neutralization, impaired mucus secretion and precipitate lesions on the mucosal layer 2. There is a powerful association between peptic ulcers and infection of Helicobacter pylori. There is a balance between the aggressive (i.e. acid, pepsin, active oxidants, H. pylori) and the mucosal protective (i.e. mucus, bicarbonate, prostaglandin’s) factors in stomach. Medication is necessary to alleviate these symptoms and must be used to eradicate H. pylori. In addition to medications many lifestyle changes like diet and exercise are important. Certain herbs, acupuncture, or homeopathy might be helpful additions to usual medical care.

Treating peptic ulcer has been commonly targeted at either counteracting the aggressive factors or stimulating defensive one. Solanum nigrum, aplant herb is one of the traditional medicines with high nutraceutical properties due to its antiseptic, antidysenteric and antidiuretic properties and it has been used for the treatment of many skin diseases, kidney disorders, non-communicable diseases and many other common ailments 3. Solanum nigrum have been proved for its potential anti-ulcerative properties 4.

MATERIALS AND METHODS: This study evaluated the anti-ulcer activity of Solanum nigrum L. extracts in rats by using pylorus ligated ulcer model and it was subjected to preliminary phytochemical studies for the identification of phytoconstituents.

Dried materials were coarsely powdered and macerated with alcohol and aqueous solvents for 72 hrs. The total aqueous extracts were also prepared separately by cold maceration method 5. The final product was filtered, dried and the color and consistencies were taken. The dried extracts were subjected to routine chemical test for the presence of phyto constituents.

Selection of Animals: Albino rats of either sex weighing around 150-250g were taken from in-breed colony animals, which were housed in polypropylene cages and maintained under standard laboratory conditions of temperature at 24±2oC. Commercial pellet diet supplied by Sankaralingam college of Pharmacy and water were provided ad libitum. The food was withdrawn 18 hours before the experiment but allowed free access of water. To avoid Coprophagy and fighting, the rats were fasted in wire-bottomed cages 5. All animal experiments were carried out in accordance with the guidelines of “Committee for the Purpose of Control and Supervision on Experiments on Animals (CPCSEA)” (No.- B 6705/2011).

Acute Oral Toxicity Studies: A safe dose of the extract was determined by acute oral toxic class method of Organization of Economic Co-Operation and Development (OECD) as per 423 guidelines 6. The animals were divided into 4 groups of each. The first group served as a solvent control, the second group was administered with Rantidine 2mg/kg p.o 6. The remaining two groups were treated with the extracts of Solanum nigrum at 200 and 400mg/kg p.o respectively. The following groups of animals were used

Pylorus Ligation Model: The test samples were administered to animals in 5 ml/kg as suspensions oral treatment were carried out 1 and 0.5 hour before pyloric ligature, respectively. After 18 hours of fasting, ulcer induction was undertaken 7. The rats were quickly and mildly anaesthetized with chloroform and the abdomen was cut open through a midline incision. The pylorus was secured and ligated with silk sutures, after which the wound was closed and the animals were allowed to recover from anesthesia. After ligation of the pylorus, drinking water was withheld and the gastric examinations were under taken 19 hours after pylorus ligation.

The animals were sacrificed with an overdose of chloroform and the stomachs were opened along the greater curvature, rinsed with saline to remove gastric contents and blood clots and examined by a magnifier lens (x5) to assess the formation of ulcer. Using 3 M transpore surgical tapes assessed ulcer area, which was fixed on a light and transparent sheet and the ulcer area was measured for each stomach. The number of erosions formed on glandular portion of stomach was counted and each was given a severity rating on a 1-3 scale.

The overall total divided by a factor of 10 was designated as the ulcer index for that stomach. The gastric contents were collected through the esophagus. The mucous was then washed and extent of ulceration was scored. Blood sample were withdrawn from the marginal vein and subjected to estimation of serum alkaline Phosphatase and serum calcium.

Total acidity of Gastric Juice: An aliquot of 1ml of gastric juice was taken in to a 50 ml conical flask and two drops of phenolphthalein indicator was added and titrated with 0.01N NaOH until a permanent pink color was established. The volume of 0.01N NaOH consumed was noted, total acidity was calculated and expressed as meq/l 8.

RESULTS AND DISCUSSION: The results of anti-ulcer activity of the extracts of Solanum nigrum on pylorus ligation induced gastric ulcer in rats are summarized in Table 1 and 2.

Solanum extracts showed (3.25 and 3.02 ml) high significant equipotent effects as that of Ranitidine (2.65 ml) in reducing the gastric juice volume and also showed elevation in pH indicating their capacity to reduce the acidity of the gastric juice.

The mean pH value of Solanum extracts at 400mg/kg was 4.65 which showed almost equipotent as that of Rantidine (4.82). The severity of the Gastric ulceration in pylorus ligation method as assessed is based on the mean ulcer index.

The mean ulcer index in control group was 1.5. The Solanum extract at 200 mg/kg and 400 mg/kg exhibited mean ulcer index of 0.63±0.48 and 0.38±0.48 respectively, which is almost significantly comparable to that of Rantidine (0.25±0.29) and proved its protection effect against ulcer formation due to pylorus ligation (Fig. 1).

All the test extracts showed the decrease in gastric juice volume on comparison to control group and indicated their anti-secretary mechanism. 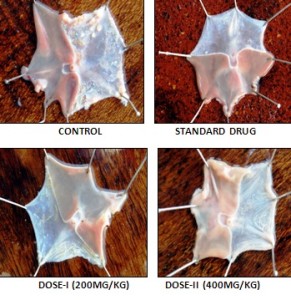 From the above results, it can be inferred that, Solanum extracts showed marked anti ulcer activity in pylorus ligation induced gastric ulcer model in a dose dependent manner. Solanum extractsat 200 mg/kg and 400 mg/kg reduced the gastric volume, free acidity, total acidity and ulcer index thus showing the anti-secretary mechanism involved in the extracts for their anti-ulcerogenic activity.

Thus Solanum leaves exhibited significant anti ulcer activity and almost equipotent effect as that of Ranitidine and these results offer pharmacological evidence and support on the folkloric use of Solanum nigrum leaves as an anti ulcer agent 11, 12.