ABSTRACT: Peptic Ulcer Disease (PUD) is one of the most prevalent pathogenic conditions which affects around 5-10% of the global population. Helicobacter pylori infection and the use of Non-Steroidal Anti-inflammatory Drugs (NSAIDs) are two of the most common etiological causes in the PUD pathogenesis. First line treatment for PUD involves use of drugs which cause acid suppression or target against the eradication of Helicobacter pylori infection. Ulceration generally occurs due to the disturbance of the normal equilibrium caused by either enhanced aggression or diminished mucosal resistance. Peptic ulcer disease (PUD) may also occur as a result of the regular usage of certain drugs, irregular food habits, stress, alcohol consumption, and so forth. Recent years have shown a significant increase in the consumption of NSAIDs, despite their harmful side effects. However, administration of NSAIDs, along with certain drugs or supplements may reduce the deleterious side effects. This research evaluates the ulcer protective efficacy of the combined dose of Aloe vera and vitamin-E in the Indomethacin-induced ulcerated rats. The therapeutic efficacy of the combined dose of drugs was compared with the disease control group and the standard drug Ranitidine. Data indicates that the administration of both individual and combined doses of Aloe vera and vitamin E showed a significant decrease (P˂0.001) in ulcer index, Ulcerated surface (%), gastric volume, total acidity and increase in the gastric pH. The efficacy of the combined dose of drugs was comparable with the control group and standard drug Ranitidine. This research presents the comparative study among the individual and combined doses of Aloe vera and vitamin E for their antiulcer efficacy in the Indomethacin administered healthy albino rats. It can help in further studies for their antiulcer efficacy in future work for new antiulcer drugs development.

INTRODUCTION: Ulcer is considered as an inflamed break in the skin or the mucous membrane lining the alimentary tract 1.

However, any disturbance between aggressive and protective factors may result in the mucosal injury and may lead to PUD 3. The pathophysiology of peptic ulcer involves an imbalance between aggressive factors (acid, pepsin, refluxed bile salts, ingested drugs and H. pylori infection) and defensive factors (mucus, prostaglandin, bicarbonate, phospholipids, nitric oxide and growth factors) 4, 5. Hence, peptic ulcers are defined as defects in the gastric or duodenal mucosa and submucosa, which extend through the muscularis mucosa 6. The structural and functional integrity of the gastric and duodenal mucosa maintains the equilibrium between aggressive factors and protective mechanisms. Few of the protective mechanisms involved in maintaining the normal gastric physiology includes: Secretion of mucus by surface epithelial cells 7, 8, discharge of bicarbonate into the surface mucus, to create a buffered surface microenvironment 9, release of acid and pepsin from the gastric pits as ‘jets’ through the surface mucus layer, entering the lumen directly without contacting surface epithelial cells 10, rapid gastric epithelial redevelopment 10, robust mucosal blood flow, to sweep away hydrogen ions that have back diffused into mucosa from the lumen and to sustain the high cellular metabolic and regenerative activity 11 and mucosal expansion of prostaglandins, which helps in maintaining the mucosal blood flow 12.

An estimated 15,000 death occur each year as a consequence of PUD. In India, PUD is common. In the pharmaceutical industry, antacids and drugs share 6.2 billion rupees and found a 4.3% market share 13. Several natural products are reported to possess antiulcer activity, but limited clinical data are available to support the use of herbs as gastro-protective agents 14. However, Aloe vera is frequently used in several therapeutic applications because of their high therapeutic efficacy and low toxicity. Aloe vera is known to possess anti-ulcer property 15. Aloe vera belongs to the family Liliaceae and is usually known as “aloe gel.” Aloe vera is found all over India. Aloin, isobarbaloin, and emodin are the major chemical constituents of Aloe vera 16. The anti-ulcer activity of the Aloe vera is reported in Indomethacin-induced ulcer model. The antiulcer activity of Aloe vera is due to it's antioxidant, anti-inflammatory, mucus-secreting, cytoprotective, healing, and immunomodulating properties 17.

Vitamin E is a group of eight lipid-soluble compounds comprising four tocopherols and four tocotrienols, and it plays a major role in maintaining the cellular antioxidant defense system. Alpha-tocopherol is the most biologically active and is frequently used as a dietary supplement. Alpha-tocopherol is a naturally occurring antioxidant in biological systems and is present in the cell membrane of various tissues, including the intestine and stomach 18. The anti-ulcer activity of vitamin E is reported in stress, indomethacin, reserpine, hydrochloric acid, sodium chloride, and ethanol-induced ulcer models 19. The pretreatment of animals with vitamin E is reported to produce a significant inhibition of gastric lesions. Vitamin E is believed to protect cells from oxidative stress, regulate immune function, and maintain endothelial cell integrity. It is also known to promote the synthesis of prostaglandins and glutathione in tissues of vitamin E treated animals which have been suggested as a possible mechanism of anti-ulcer activity. Vitamin E blocks the free radical chain reaction and thus prevents the ROS-induced injury 20. The formation of experimental gastric lesions may be reduced through decreasing free radicals and diminishing lipid peroxidation 21. The mechanisms by which NSAIDs produce acute and chronic gastro-duodenal mucosal injury are partially understood, but it has been suggested that the mechanism underlying the PUD pathogenesis is mediated through lipid peroxidation 22. In the present study, the antiulcer activity of the combined and individual doses of Aloe vera, vitamin E were evaluated in the Indomethacin-induced ulcerated rats.

Experimental Protocol: Albino rats were divided into 6 groups containing 6 rats each. Animals were fasted for 24 h with water ad libitum, before the start of the experiment.

Normal Control Group (Group I): Rats in this group received distilled water (10 ml/kg, per oral) by oral gavage for 5 days.

Disease Control (Group II): Rats in this group were treated with Indomethacin (20 mg/kg, per oral) by oral gavage for 5 days.

On the 5th day, Rats were sacrificed 5 h post treatment and stomach was cut open in the greater curvature, rinsed and examined by a 10Χ magnifier lens. The number of ulcers formed were recorded and ulcer scores were recorded as 0 = no ulcer, 1 = superficial ulcer, 2 = deep ulcer, 3 = perforation. Ulcer index was measured by the formula 23:

US = Average number of severity score and

UP = Percentage of animals with ulcers.

The percentage inhibition of ulceration was calculated as:

Determination of Ulcer Score: The stomachs were released along the greater curvature, rinsed with saline to eliminate gastric contents and blood clots and examined by a 10Χ magnifier lens to assess the development of ulcers. The numbers of ulcers were counted. Scoring of the ulcer will be made as follows:

Determination of pH: Aliquot of 1 ml gastric juice was diluted with 1 ml of distilled water, and the pH of the solution was read using pH meter 24.

Determination of Total Acidity: An aliquot of 1ml gastric juice diluted with 1ml of distilled water was taken into a 50 ml conical flask, and two drops of phenolphthalein indicator were added to it. An aliquot was then titrated with 0.01N NaOH until a permanent pink color was observed. The consumed volume of 0.01N NaOH was noted. The total acidity is expressed as mEq/L through the following formula 25, 26.

Where; n = Volume of NaOH consumed

Determination of Free Acidity: Instead of phenolphthalein indicator, the Topfer's reagent was added an aliquot of gastric juice and then titrated with 0.01N NaOH until the canary yellow colour was observed. The volume of 0.01N NaOH consumed was noted. The formula to determine the total acidity will be used to calculate the free acidity 25. 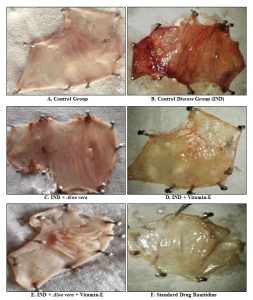 Thus, inhibition of prostaglandin synthesis by non-steroidal anti-inflammatory drugs like Indomethacin consequences in increased susceptibility to gastric mucosal lesions and mucosal injury, as observed in disease control. Individual doses of both Aloe vera and vitamin E are reported to reduce the aggressive factors and maintain normal homeostatic conditions in the stomach 23.

CONCLUSION: The present study reveals that the therapeutic efficacy of the combined doses of Aloe vera and vitamin E was far better than their doses in the treatment of PUD. The combined dose of Aloe vera (150 mg/kg) + vitamin-E (50 mg/kg) significantly protected the mucosa from being damaged by Indomethacin, thus signifying that combination may act as an excellent candidate for future studies on peptic ulcer.

ACKNOWLEDGEMENT: Authors are thankful to the Hygia Institute of Pharmaceutical Education and Research, A.K.T.U, Lucknow, India for providing all the necessary facilities to conduct this research.

A. Srivastava * and R. Singh