PHARMACOLOGICAL EVALUATION OF POLYHERBAL SUSPENSION AS ANTI-DEPRESSANT IN RAT

PHARMACOLOGICAL EVALUATION OF POLYHERBAL SUSPENSION AS ANTIDEPRESSANT IN RAT

INTRODUCTION: Now a day’s depression is a major health problem of the whole world. About 350 million people suffer from the disease, and it will become the second cause of death till 2020. Depression is a condition of psychological illness. It is characterized by feelings of sadness or despair.

Depression can change an individual's thinking capacity and also affects his/her social behavior and sense of physical well-being. Peoples of any age group can be affected by depression, including young children and teens. It can be hereditary, run in families, and usually starts between the ages of 15 and 30 years 1-2.

Some of the common factors that cause depression are genetic (hereditary), trauma, and high levels of stress, mental illnesses such as schizophrenia, substance abuse, and postpartum (after childbirth) depression. Some other reasons that contribute to depression are serious medical conditions such as cardiac disease, cancer and HIV use of certain medications, alcohol and drug abuse, individuals with low self-esteem, trauma and high levels of stress due to financial problems, the breakup of a relationship or loss of a loved one.

Depression can be reduced by regular exercise, a healthy diet, and stable relationships. They help keep stress low and thereby reduce the chances of feeling depressed again. With correct treatment, a depressed person can return to a happier life 3.

Moringa oleifera is an excellent remedy for malnourishment belonging to the family Moringaceae. Moringa is a rich source of nutrients a variety of necessary phytochemicals present in its leaves, pods and, seeds. Moringa provides seven times more vitamin C than oranges. Moringa oleifera can grow in an adverse situations also & requires little care. It requires loamy mud with a slightly acidic to slightly alkaline pH 4.

Rosa damascena mill L. is a well-known plant of the Rosaceae family. Rose is well recognized ornamental plant & has been discussed as the king of flower 7. The R. damascena has also used for therapeutic purposes; several products & isolated constituent as of flowers, petals, and hips (seed pot) of this plant have been located for study in a variety of in-vivo & in-vitro studies. Numerous constituents were obtained from flowers, petals, and hips (seed-pot) of Rosa damascena together with terpenes, glycosides, flavonoids, and anthocyanins. This plant contains carboxylic acid, vitamin C, kaempferol, and quercetin Flowers also include a bitter principle, tanning matter, fatty oil, and organic acids 8.

R. damascena is also used in the treatment of abdominal & chest pain, treatment of menstrual bleeding, strengthening the heart & digestive problems & as an anti-inflammatory.

Rosehip possesses seeds of the rose plant. Dried rosehip and the seeds are used together for the formation of medicine. Fresh rosehip is rich in vitamin C, so it can be used in cold flu, and vitamin C deficiencies 9.

Solvents and Chemicals: Solvents and chemicals were used in the experiments are Methanol, ethanol, n-hexane, and butanol are used in extraction. DPPH (2-2 diphenyl-1-picrylhydrazyl), ascorbic acid for analysis of antioxidant activity. Other reagents like HCL, ammonia, NaOH, chloroform, sulphuric acid, lead acetate, 1N Sodium Hydroxide, etc. are used for phytochemical screening.

The plant material Rosa Damascena was purchased from the local market of the chowk, Lucknow. The sample of Rosa damascenes Herm. Family- Rosacea was authenticated by macroscopic observations and confirmed by comparing it with flora and authentic samples.

Extraction Process of M. Oleifera: The leaves are cleaned by tap water & the portion was dried in the shade for a few days. The dried sample was ground in a mortar pestol. The powdered drugs were kept in sealed containers & protected from light until used. Dried powdered leaves were separately placed into a thimble & were extracted with 30 to 40 °C with ethanol in a Soxhlet apparatus. Extraction was carried out at five cycles/hour until exhaustion. The combined extract from each extraction was dried under reduced pressure at 50 °C using a Rotary Vacuum evaporator. The crude extract was weighed & kept in a tight container protected from light 10.

Extraction process of Rosa damascena: The petals were separated & fresh rose hips are collected and stored in a dark place at room temperature the dried sample was ground in mortar pestle. 200 gm. of the dried rosehip was placed in Soxhlet apparatus & extracted with methanol up to 60 to 85 °C containing glass beads in a volumetric flask. Extraction was carried out at five cycles / h until exhaust. The extract was concentrated in hot air cabinet at 60 °C and then added n-hexane to the crude extract up to (500 ml) by vigorous shaking.

Phytochemical Analysis: Qualitative phyto-chemical tests for the identification of anthocyanins, coumarins, steroids, tannins, saponins, quinones, phenolic compounds, and flavonoid were carried out for the methanolic and ethanolic extract of the test drug.

Preparation of Suspension of the Herbal Drug: Weigh 5 gm of an extracted solution of Moringa oliefera and Rosehip, triturate it properly. Add about 1 gm of tragacantha solution; add propyl paraben as preservative up to 0.1 gm. All the ingredients are triturated properly now add 2, 5 ml glycerin, at last, make up the volume with distilled water about 100 ml 11.

Experimental Animals: Mouse (3-4 months old) of either sex were selected for the study and followed by acclimatization for two weeks by maintaining standard environmental conditions and fed with standard pellet diet & water. The experiment will be carried out following the CPCSEA guidelines and Institutional animal ethical clearance. Then all animals will be randomized into five groups with six animals in each group.

Acute Toxicity Studies: Acute toxicity studies were performed, permitting the organization for economic cooperation and development (OECD) guidelines. The acute toxicity study of herbal drug suspension was analyzed after oral administration at different doses as per the OECD guideline no. 423 method was accepted for toxicity studies. The extracts were administered orally at the treatment of 2000 mg/kg, 4000 mg/kg observed for seven days.

It is a yellow to orange crystalline powder with a molecular weight of 300.44 Accutane may cause serious brain problems; Accutane can increase the pressure in your brain. This can lead to permanent loss of eyesight &, in rare cases, death.

Physical Parameters for the Evaluation of Antidepressant Activity:

Procedure: The tail suspension test involves suspending the mouse above the ground by their tails, for conducting the procedures only requires a suspension bar or shelf ledge, & tape. In a laboratory, we use tail suspension boxes made of wood with the dimensions (58 height × 60 widths × 11.5 cm depth).

This session is generally carried out for 6 min. During the behavioral analysis, the time that each mouse recorded the mobility time is measured, while it is possible to measure the immobility time directly 12.

Forced Swim Test: Forced swim test is commonly used for the evaluation of antidepressant drugs & the study of depressive behavior in rodents. This test is based on the fact that when animals are placed in a beaker filled with water & forced to swim, they try to escape by forceful movements. The animal will first efforts to escape to move out that time will consider immobility time.

This test is carried out for the exposure of the animal to stress. In this test, a transparent cylindrical glass container which should be 50 cm in height & a diameter should be 20 cm, for observation of animals prepare a video camera in front of a container for a view of animal behavior. The procedure is different for rats and mice. For mice, there is one session for 6 min, divided in first (2 min) & lasts for 4 min.

For Rats 2 session is conducted, the first session is the pretest for the 15 min; the second session is approx. for 5 min. Fill the container with tap water at 23 ± 1 °C adjust the water depth according to the Rat size. The rat hind legs cannot touch the bottom of the container. Place each rat in the water-filled cylinder container for 6 min. After 15 min removes the rat from the container & place it in the transient drying cage. Change the water after every session to avoid any influence on the next rat. During the behavioral analysis note, the Mobility time (struggling) climbing observed the front paws 13.

This cut off the quantity of light beam is measured electronically. This instrument measures the active exploratory movement of the animal. In our present study, the high dose of test drugs shows a significant increase in locomotor activity.

Disease control group shows the least movement in actophotometer. This equipment is used to measure the effect of the drug on motor activity of the rat and useful in screening & evaluation of drug for pharmacological & toxicological experiments.

Hole Board Test: Box with holes is used in this method, which has been used to measure the tendency of sniffing through holes. Hole poking is normal rodent behavior Animals who are in depression have a reduced tendency of poking the holes.

The apparatus is made up of one box in which the holes are spaced evenly on the floor of the equipment; there are 12 to 14 holes for a test. Rats are placed one by one in the boxes, frequency, and duration of responses are measured with these parameters several times. Rate of head dipping is the condition which is measured in case of depression, frequency of hole poking is an exploration condition also known as an investigatory behavior. 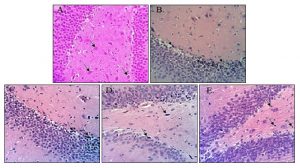 RESULTS AND DISCUSSION: Now, we can discuss the significant action of the polyherbal formulation by the observations seen during the experimental protocol. The various parameters observed are struggled during tail suspension and forced swim test, locomotor activity in actophotometer, and sniffing response in hole board test.

In the case of drug-induced depression, the statistical results of ANOVA show that the polyherbal formulation has demonstrated significant response as compared to the standard drug.

The result of the present study suggested that the ethanolic leaf extract of Moringa oliefera possesses antidepressant activity in TST, FST, HBT, and Actophotometer test.

Qualitative phytochemical analysis of Moringa Oliefera leaf extract shows the presence of steroids, saponins, coumarins, quinones, flavonoids, etc. Moringa oliefera at a dose of 200 mg/kg shows significant response (P<0.0001) by one way ANOVA followed by Dennett's multiple tests and demonstrated the significant value, ****p<0.0001. In the case of TST, there is a reduced duration of immobility of rats if compared to disease control. Histopathological report of brain tissues also supports that polyherbal formulation has a neuroprotective effect.

FST, TST, HBT, Actophotometer are the most commonly used models for the screening of new antidepressant drugs. Depressive symptoms are observed due to functional deficiency of noradrenaline, serotonin, or dopamine neurotransmitters in the limbic system, prefrontal cortex, hippocampus, and amygdala areas of the brain.

The primary target of antidepressant drugs to increase the level of these neurotransmitters in mind. Finally, based on the above result, we can conclude that the polyherbal formulation shows dose-dependent action and is helpful in the treatment of both drug-induced and stress-induced depression. In the future, this formulation can be used as a novel and effective formulation to treat depression and to save our society.

TABLE 3: OBSERVATION TABLE OF ANTIOXIDANT ACTIVITY OF M.O AND R.D

CONCLUSION: The observations obtained during the experimental protocol suggest that polyherbal formulation has a significant antidepressant action. Various behavioral models used in this study are FST, TST, and HBT & locomotory activity. The present study suggests that Moringa leaves & rose hips are neuroprotective in nature because of various phytochemicals present in these plants. Increased time of struggle in FST & TST shows that polyherbal formulation has antidepressant action.

ACKNOWLEDGEMENT: We would sincerely like to thank all teachers and staff of, Hygia Institute of Pharmaceutical Education & Research, Lucknow for providing necessary facilities, for their support and encouragement for successful completion of this research work.