INTRODUCTION: Parkinson’s disease is a progressive neurodegenerative disease, characterized by symptoms like; rigidity, tremor, impairment of balance and bradykinesia 1. In Parkinson’s disease there is degeneration of dopamine-producing (‘DOPAMINERGIC’) neurons in Substantia nigra of the brain 2 PD is generally developed around at age of 50 years and occurs in 1 to 2% people above 60 years and uprising to 3 to 5% at age 85 to 89 years 3.

Almost generally, 0.3% population is affected and occurrence of disease is higher among man than women with a ratio 1.5 to 1.0. First of all Dr. James Parkinson identified Parkinson disease (PD) in 1817.

Neurodegeneration is an irreversible pathological process. The possible cause of neuronal loss in Parkinson’s disease is deposition of misfolded proteins inside the brain such as alpha-synuclein which later on converts into Lewy's bodies. Inceased free radical load, increased rate of apoptosis & oxidative stress in our body also causes neuronal loss, which is responsible for Parkinson's disease. In today's scenario, there are many medicines in the allopathic system to treat Parkinson's disease, but they have their own side effects and are costly.

In our present study, we have chosen parts of two plants which have neuro-protective as well as excellent antioxidant properties According to WHO major part of the world population depends mainly on plant-based traditional medicines for primary healthcare need 4. Terminalia chebula and Rosa Damascena both plants are beneficial to humans and have excellent medicinal properties. Terminalia chebula belongs to family Combretaceae. Terminalia chebula is popular medicine used to treat many disorders of human body 5. In traditional medicine, fruits of T. chebula, is commonly used &have various chemically active compounds which are responsible for its medicinal properties. It has been used in Ayurveda, Homeopathic & Unani, medicine to treat geriatric diseases & improve memory& brain function 6. Rosa damascene mill, commonly known as Damask rose. It is one of the most important species of family Rosaceae. Rose is well known ornamental plant which is known as king of flower. Several components are isolated from, petals, flowers, and hips of Rosa damascene including glycosides, terpenes, anthocyanins, flavonoids. This plant also contains myrcene, carboxylic acid, kaempferol, quercetin & vitamin C. Flowers also contain the bitter principle, fatty oil, organic acids and tanning matter.

Solvents and Chemicals: Solvents and chemicals were used in the experiments are Methanol, ethanol, n-hexane and butanol are used in extraction. DPPH (2-2 diphenyl-1-picrylhydrazyl), ascorbic acid for analysis of antioxidant activity. Other reagent like HCl, ammonia, NaOH, chloroform, H2SO4, formalin solution, 1 N Sodium Hydroxide, etc. are used for phytochemical screening

Plant Collection and Authentication:  The mature seeds of Terminalia chebula were collected from the market of Aminabad, Lucknow. The sample of Terminalia chebula Retz. Family- Combretaceae was authenticated by macroscopic observations and confirmed by comparing with authentic samples preserved in crude drug repository. The flowers of Rosa damascena was purchased from the local market of chowk, Lucknow. The samples Rosa damascene Herrm. Family- Rosaceae. Macroscopic observations authenticated the sample and confirmed by comparing with flora and authentic samples.

Extraction Process of Rosa damascene: Rosa damascena were purchased from a local market of chowk from Lucknow. Rose hips were separated from the rose flower & stored in a dark place at room temperature. The dried sample was grinded in mortar pistol & powdered drug was kept in a sealed container &protected from light until used, 200 gm of the dried rosehip was placed in Soxhlet apparatus & extracted with Methanol up to 60 to 85 °C containing glass beads in volumetric flask. Extraction was carried out at five cycles / h until exhaust. The combined extract from each extract was concentrated in hot air cabinet at 60 °C and then added n-hexane to the crude extract up to (500 ml) by vigorous shaking. The extract was filtered, and the residue marc is obtained, add n-butanol (20 to 25) ml by vigorous shaking, filter the extract. Filtrate obtained was (n-butane soluble extract) Marc (Final extracted Methanolic fraction) 8.

Phytochemical Analysis: Qualitative phyto-chemical tests for the identification of antho-cyanins, coumarins, steroid, tannins, saponins, quinones, phenolic compounds and flavonoid were carried out for the methanolic and ethanolic extract of the test drug.

Preparation of Suspension of the Herbal Drug: Weigh 5 gm of extracted solution of Terminalia chebula and Rosehip, triturate it properly. Add tragacanth solution about 1 gm, add propyl paraben as preservative up to 0.1 gm. All the ingredients are triturated properly now add 2-5 ml glycerin at last, makeup the volume with distilled water about 100 ml.

Experimental Animals: Mouse (3-4 months old) of either sex will be selected for the study and followed by acclimatization for 2 weeks by maintaining standard environmental conditions fed with standard pellet diet & water. The experiment will be carried out by CPCSEA guidelines and Institutional animal ethical committee. Then all animals will be randomized into 5 groups with 6 animals in each group.

Group I: Normal Control (0.9% Normal Saline), continued with a diet for 45 days.

Acute Toxicity Studies: Acute toxicity studies were performed according to the organization for economic cooperation and development of (OECD) guidelines this acute toxicity study of herbal drug suspension was analyzed after oral administration at different doses as per the OECD guideline no. 423 method was adopted for toxicity studies. The extracts were administered orally at the dose of 2000 mg/kg, 4000 mg/kg observed for 7 days.

Haloperidol act on prefrontal and temporal area including limbic system and mesocortical area of brain adverse effect of haloperidol are uncontrolled or slowed movement, muscle stiffness.

Experimental Design: Locomotor activity: In a digital actophotometer, a continuous beam of light falls on photoactometer. Actophotometer consists of photocells, and these photocells are activated when the rays of light falling on the photocells are obstructed / cut off due to the movement of animal crossing the path of a light beam. This cut off of quantity of light beam is measured electronically. This instrument measures the active exploratory movement of an animal.

This equipment is used to measure the effect of a drug on the motor activity of the rat and useful in screening & evaluation of drug for pharmacological & toxicological experiments. In the present study it was observed that disease control group has a very little tendency to move, while the test group shows locomotory activity inside the actophotometer the response of test group is less than the standard drug.

Staircase: Staircase test apparatus is made up of transparent Plexiglas. One box has a chamber with a platform on which the animal climbs onset of climbing was observed there are seven steps and located on each side. Small food pellets. In the present study the time consume in climbing on stairs is more in case of disease control group. The group treated with low dose of test drug shows best response.

Rotarod: Rotarod apparatus is used to measure the muscle grip strength. Animals were kept on the rotating rod having a speed of 20-25 rpm. Before the test, the animals were learned by training procedure Animals are placed on rotating rod & their fall of time is recorded 9.

In the present study the fall off time for disease control group is very less as compared to other groups. Test group shows significant increase in fall of time.

Histopathology Evaluation: Group A is a normal group; there are no changes observed in the thalamus. In group B, Granulo-vacuolar degeneration of neuronal cell bodies (lewys bodies). In group C, Most of the neurons are protected.

In Group D, Neurons are well protected. There was less neuronal degeneration than that of the negative control. In Group E, neurons are protected. Most of the neuronal cell bodies are of normal morphology. 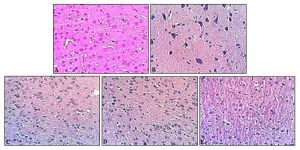 RESULTS AND DISCUSSION: In today’s scenario neurodegeneration is a common problem particularily associated with old age persons. The purpose of the present study was the evaluation of antiparkinsons activity of polyherbal formulation. Terminalia chebula and Rosa damascene are the well-known plants for their therapeutic benefits. In our present study, we used the alcoholic extract of rosehip & fruits of Terminalia chebula.

Rose hips are a rich source of antioxidants, vitamin C & beta-sitosterol, similarily Terminalia chebula is very rich in neuroprotective chemicals like gallic & ellagic acid. In our study, we have prepared a suspension by mixing the above two extracts in suitable quantity. After the formulation of dose acute toxicity study was performed according to OECD guideline. After that different animal model is used like actophotometer to check the loco-motory activity other models used are rotarod activity & staircase test.

Various observations are increased locomotory activity & increased fall of time in the test group. In the Phytochemical study of test drugs, we observed the presence of flavonoids, alkaloids, tannins, saponin and phenols in the seed extract of Terminalia chebula especially ellagic acid, gallic acid, and rosehips extract of Rosa damascena mainly contains ƅeta-sitosterol & vitamin C Therefore, one of the antiparkinson mechanism of both plants extract is thought to involve is antioxidant & neuroprotective activity Flavonoids and polyphenols increases the dopamine level acts as antioxidant, reduces the free radicals & oxidative stress.

We observed that on the administration of polyherbal formulation in low and a high dose of Terminalia chebula & Rosa damascena extract shows the significant (compare to the disease control group) dose-dependent increase in stepping time and initiation periods, also there is increased locomotor activity in the actophotometer.  Results of ANNOA show that the effect of polyherbal formulation of Terminalia chebula & Rosa damascena is statistically significant when compared with the disease control group. This indicates that the effect of high dose and standard drug has a nearly same response.

The present study may contribute to the development of novel strategies for the prevention of Parkinson's disease. Thus, a new herbal therapy may arrive for such types of patient that cannot afford conventional therapy and hospital burden. 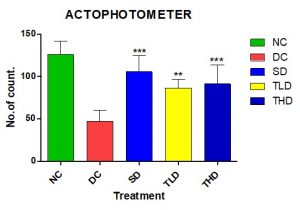 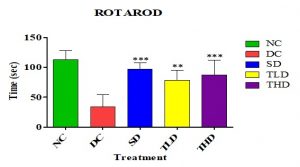 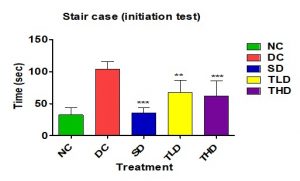 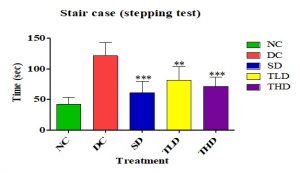 CONCLUSION: Our study suggests that the neuroprotective activity of the polyherbal suspension of Terminalia chebula and Rosa damascena inhibits the oxidative stress with no side effects. That can be used to treat Parkinson & Parkinson like symptoms.

ACKNOWLEDGEMENT: We would sincerely like to thank all teachers and staffs of, Hygia Institute of pharmaceutical education & research, Lucknow for providing necessary facility for their support and encouragement for successful completion of the research work.