PHARMACOLOGICAL EVALUATION OF SOME NOVEL THIENO 1, 2, 3-TRIAZINES-4-ONES FOR ITS ANALGESIC ACTIVITY

PHARMACOLOGICAL EVALUATION OF SOME NOVEL THIENO 1, 2, 3-TRIAZINES-4-ONES FOR ITS ANALGESIC ACTIVITY

INTRODUCTION: Pain is a symptom which always subjective 1. Acute traumatic pain is unpleasant, emotional and sensory experience. Acute pain is usually short-term, lasting anything from a few seconds to a few hours or a few days to a few weeks. Acute pain acts is a warning signal that alerts you to possible injury. Some types of acute pain e.g. back strain or a headache may be relieved without any medical treatment as the pain will ease off by itself. Other types of acute pain will be more serious e.g. appendicitis and will require strict medical attention to correct the problem and relieve the pain. Chronic pain was originally defined as pain that has lasted 6 months or longer.

More recently it has been defined as pain that persists longer than the temporal course of natural healing, associated with a particular type of injury or disease process 2. Neuropathic pain can arise following injury of peripheral nerves, when damaged or neighbouring undamaged nerve fibres are sensitized or fire ectopically. It is also characterized by mechanical and thermal hyperalgesia.

In addition, patients and animals with neuropathy are sensitive to stimuli that do not evoke a pain behaviour under normal conditions, e.g., touching, cooling, or warming the affected site 3. Nocireceptors are, simply, sensory receptors which respond to pain and painful stimuli. When tissue has been damaged, messages are sent along the nerves to the supra spinal region. The spinal cord plays a very important part in our perception of pain. The spinal cord is a collection of specialised nerves and cells that lie within the spine. At the base of the skull the spinal cord is connected to an area we call brain stem, which is the lower part of the brain.

Not every pain message reaches the brain however; all messages reach the spinal cord which is where some messages may be blocked. Repetitive stimulation (e.g. from a prolonged painful condition) can sensitize neurons in the dorsal horn of the spinal cord so that a lesser peripheral stimulus causes pain (wind-up phenomenon). Peripheral nerves and nerves at other levels of the CNS may also be sensitized, producing long-term synaptic changes in cortical receptive fields (remodelling) that maintain exaggerated pain perception. Psychologic factors are important modulators.

They not only affect verbal expression of pain (i.e. whether patients appear stoic or sensitive) but also generate neural output that modulates neurotransmission along pain pathways. Psychologic reaction to protracted pain interacts with other CNS factors to induce long-term changes in pain perception. The most significant and reproducible factors have been mood or depression and to a lesser extent somatization/ anxiety 4.

Depression has been associated with decreased pain thresholds and tolerance levels, reduced ability, general withdrawal and mood disturbance such as irritability, anhedonia (loss of enjoyment of good things in life), frustration and reduced cognitive capacity 5. When tissue is destroyed or invaded by leukocytes in inflammation, numerous mediators are delivered by the circulation and/or liberated from resident and immigrated cells at the site. Proalgesic mediators include proinflammatory cytokines, chemokines, protons, nerve growth factor and prostaglandins, which are produced by invading leukocytes or by resident cells. The analgesic mediators, which counteract pain, are also produced in inflamed tissues. Opioid peptides are synthesized in circulating leukocytes, which migrate to inflamed tissues directed by chemokines and adhesion molecules.

Under stressful conditions or in response to releasing agents (e.g., corticotropin-releasing factor, cytokines, nor adrenaline), leukocytes can secrete opioids. They activate peripheral opioid receptors and produce analgesia by inhibiting the excitability of sensory nerves and/or the release of excitatory neuropeptides 6.

Acute Toxicity (LD50): Acute toxicity studies were performed according to Organization for Economic Co-Operation and Development (OECD) guidelines 425. The acute toxicity of some novel hetero fused pyrazolo pyrimidines derivatives was determined by using female albino mice (18-25 g) those maintained under standard husbandry conditions. The animals were fasted 3 hrs prior to the experiment. Animals were administered with single dose of test compounds and observed for its mortality during 48 hours study period (short term) toxicity. Based on short-term profile of drug, the dose of the next animals was determined as per as OECD guideline 425.

All the animals were observed for mortality during a period of 14 days after administration of drug (long term toxicity). LD50 values were calculated with the help of AOT 425 software (Enviromental Protection Agency, USA)

Group Classification: All group consist six animals in each. Animals were treated orally.

Hot Plate Test in Mice: The hot plate test was carried out according to the method described by Eddy and Leimbach.7 Male Swiss albino mice (18-25 g) were placed on the hot plate (INCO, Ambala, India) maintained at 55 ± 1oC and the time between placement on the hot plate and the occurrence of either licking of the paws, shaking or jumping off from the plate, was recorded as response latency. Mice with basal latency of more than 10 sec. were not included in the study. The response latencies were measured before distraction (basal) and after drug treatment at 30, 60, 90, 120 min. The cut off time for hot plate latency was set at 20 sec 8.

Acetic Acid Induced Writhing Test Response in Mice: Analgesic activity was evaluated on the acetic-acid induced writhing test. Male albino mice (18-25 g) (over night fasted, with free access to water), were administered with different treatments orally one hour before acetic acid injection. Control group received only vehicle. The animals pretreated with standard and test drug. After one hour of drug administration, 1 % v/v acetic acid (0.1ml/10g) was injected intraperitoneally and after five minutes number of writhing was counted for the period of 20 minutes 9.

Formalin Induced Paw-licking Test in Mice: The anti-nociceptive activity of the drug was determined by using the formalin test. The formalin test possesses two distinctive phases, which possibly reflecting different types of pain. Male albino mice (18-25 g) were given orally diclofenac sodium or vehicle or test drug. 1 hour latter 20 µl of 1 % formalin was injected subcutaneously under the dorsal surface of hind paw.

Mice were observed in chambers. The number of licks in the injected paw was counted and considered as pain stimuli. The first phase of the nociceptive response normally peaked 0-10 minutes after the formalin injection and the second phase 20-30 minutes after the formalin injections representing neurogenic and inflammatory responses respectively 10.

Statistical Analysis: The values were expressed as mean ± SEM from 6 animals. The results were subjected to statistical analysis by using one - way ANOVA followed by Tukey - Kramer test to calculate the significance difference if any among the groups. P<0.05 was considered as significant.

Acute Oral Toxicity: CP1, CP2 and CP3 administered at a dose of 550 mg/kg did not show any death in any animal, indicated that these compounds were safe till 550 mg/kg. Whereas CP1, CP2 and CP3 at 2000 mg/kg all animals died within 3 days after the administration. Based on these results the LD50 was computed and it was found to be 1098 mg/kg for all these compounds, one tenth of the LD50 dose approximately 50 mg/kg was selected as higher dose for pharmacological evaluation. The lower dose was half of the higher dose.

Effect of 1, 2, 3-Triazines-4-ones Series Of Compounds in Hot Plate Method: Administration of vehicle (2 % Gum acacia suspension) treated mice showed the latency period of licking (1.010, 0.8983, 1.157 and 1.043 sec.) at different time interval 0,  60, 120 and 180 minutes indicating the temperature used for the experiment did not produced any injury to paw.  Pentazocin (4 mg/kg) was used as reference standard showed significant analgesic activity.

These results suggest that CP1, CP2 and CP3 (50 mg/kg) showed significant analgesic activity. While CP1 possess good analgesic activity at lower dose. The onset of action of these compounds was found within 60 minutes and duration was greater than 3 hours (Fig.1 a, b, c). 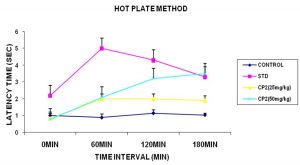 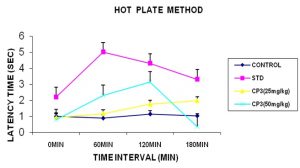 DISCUSSION: Methaqualone is a well-known quinazolone derivative reported to possess CNS depressant activity. 1, 2, 3-triazines of the proposed study, are bioisosters of methaqualone, having thiophene instead of benzene in the parent nucleus. 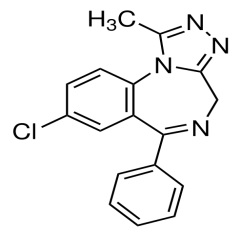 To verify this hypothesis experiments of analgesic activity in both peripheral and central analgesic models, were designed. In this study, hot plate method was chosen to evaluate the central analgesic activity. Pentazocin (5 mg/kg) was used as reference standard shown significant analgesic activity. Thieno 1, 2, 3-triazines produced antinociception against thermally induced pain stimuli in mice at various time points after the treatment. The effect observed was very mild and statistically significant. The hot plate test is considered to be selective for opioid-like compounds, which are centrally acting analgesics in several animal species. The hot plate method has been found to be suitable for evaluation of centrally but not of peripherally acting analgesic. In low dose levels the compounds have not shown significant values except CP2. In high dose levels CP1, CP2 and CP3 have shown good analgesic activity and found to be statistically significant.

Formalin causes inflammatory pain by inducing capillary permeability and liberating endogenous substances that excite pain nerve endings. NSAIDs can inhibit COX in peripheral tissues and, therefore with the mechanism of transduction of primary afferent nociceptors. Probably the mechanism of analgesic effect of thieno 1, 2, 3 triazines-4-ones be due to blockade of the effect or the release of endogenous substances that excite pain nerve endings similar to that of pentazocin and other NSAIDs.

The formalin test is used to evaluate the mechanism by which an animal responds to moderate, continuous pain generated by the injured tissue. This test is characterized by two phases. The early phase (immediately after injection) seems to be caused by C-fibre activation due to the peripheral stimulus. The late phase (starting approximately 20 min after formalin injection) appears to be depending on the combination of anti-inflammatory reaction, activation of NMDA and non-NMDA receptors, and the NO cascade in the peripheral tissue and functional changes in the dorsal horn on the spinal cord. Both these functional changes appears to be initiated by the C-fibre barrage during the early phase and to be related to excitatory amino acid (EAA) release in the spinal cord and activation of NMDA receptors subtypes. The formalin test has been used to evaluate the antinociceptive effects of competitive and non-competitive NMDA receptor antagonists administered intrathecally and systemically 11.

In formalin induced paw licking test in mice, all the compounds in low dose levels showed significant results. At high dose (50 mg/kg) levels CP1, CP2 and CP3 have shown good activity similar to standard compound. These results suggest that it may be acting through central and peripheral mechanism. Thieno 1, 2, 3-triazines-4-ones exhibited an efficacy comparable to that of diclofenac sodium in inhibiting neurogenic (early phase) and inflammatory (late phase) pain stimuli caused by formalin.

ACKNOWLEDGEMENT: The authors thank PES College of Pharmacy and management for their grants.

CONFLICT OF INTEREST: The authors declare that there are no conﬂicts of interest and they have no actual or potential competing ﬁnancial interests. All the authors declare that this manuscript is original, has not been published before and is not currently being considered for publication elsewhere. All the authors confirm that the manuscript has been read and approved by all named authors and that are no other persons who satisfied the criteria for authorship but are not listed. We further confirm that the order of author listed in the manuscript has been approved by all of us.