ABSTRACT: Cymbopogon olivieri (Poaceae) is a native plant to the south of Iran and is used for the treatment of some inflammative based disorders and as a pain killer. Regarding the presence of volatile terpenoids in the aerial parts, we were prompted to investigate the analgesic and anti-inflammatory activities of the essential oil from C. olivieri in animal models. The oil was also analyzed by GC and GC–MS to identify the potentially responsible compounds for observed properties. The analgesic activity of the oil was assessed by acetic acid-induced writhing test and hot plate method while the acute anti-inflammatory effect was investigated by induced-inflammatory paw edema in the rat. The studied oil could decrease the number of acetic acid-induced writhes in mice compared with animals that received vehicle only. In hot-plate tests, the studied doses of C. olivieri were not effective. The oil moderately reduced carrageenan-induced paw edema in rats. The major component of the oil was characterized as Piperitone (66.0%), which might be responsible for these observed activities. The results suggest that C. olivieri essential oil possesses biologically active constituent(s) that have significant activity against peripheral nociception, which supports the ethnomedicinal claims of the plant application in the relief of pain.

INTRODUCTION: The genus Cymbopogon belongs to the Poaceae family and comprises about 180 species, subspecies, varieties, and subvarieties. This genus has two perennial species in Iran (C. olivieri and C. parkeri) that are distributed in tropical and subtropical regions of Asia 1.

Commonly known as Lemongrass, Cymbopogon species and their essential oils are used in foods, drugs, cosmetics, the perfumery industry, and in soap products.

C. olivieri is used as an alternative treatment in some countries, including Iran, as an antiseptic agent and to treat stomach ache, nervous, pyretic, vomit and rheumatism problems. It is also considered as a natural agent to relieve pain and inflammatory based disorders 2. Considering this fact, we were prompted to evaluate the analgesic and anti-inflammatory activities of C. olivieri essential oil (COEO) for the first time and investigate the pharmacological basis for the folkloric use of it as a pain killer and natural anti-inflammatory agent. The essential oil from the aerial parts of C. olivieri was also analyzed by GC and GC–MS in order to identify the potentially responsible compounds for observed activities.

Plant Material: Fresh C. olivieri aerial parts were collected in August 2017 from Bandar Abbas, Hormozgan Province, south of Iran. The specimen was identified by N. Kazemivash, and a voucher was deposited in the Herbarium of Tehran Medical Sciences, Islamic Azad University (IAU), Tehran, under code number of 437-PMPIA.

Essential Oil Extraction: The aerial parts were chopped and immediately submitted to hydrodistillation in a Clevenger-type apparatus for 2 h. At the end of the distillation, the essential oil was collected, dried with anhydrous Na2SO4 and kept in glass vials at −18 °C for further analysis.

Animals: Male NMRI mice (20-25 g) and Wistar rat (180-220g) were used throughout this study. Animals were housed in groups of 6 and were allowed free access to food and water except for the short time that they were removed from their cages for testing. All experiments were conducted between 10.00 a.m. and 14.00 p.m., with normal room light (12 h regular light/dark cycle) and temperature (22 ± 1 °C). All procedures were carried out by the institutional guidelines for animal care and use. Each mouse was used only once.

All animal procedures were by the recommendations of the Canadian Committee for care and use of animals 3 and follow the guidelines and instructions for animal use and care of Experimental Animal Ethics Committee of Faculty of Pharmacy, Islamic Azad University, Iran (Ethical Approval Number: IR.IAU.PS.REC.1397. 137).

Acetic Acid-Induced Writhing in Mice: The writhing acetic acid test was performed as originally described by Siegmund et al.3 This method was employed to preferentially evaluate the possible peripheral effects of COEO as analgesic substances. Four groups of 6 mice were used; COEO (10 and 20 mg/kg), Mefenamic acid (30 mg/kg), and the vehicle, sweet almond oil (10 mg/kg), were injected intraperitoneally to the first, second, third and fourth groups of mice, respectively, 30 min prior to the injection of acetic acid (1%, 10 ml/kg). Mefenamic acid is a well-known peripheral analgesic drug, and it was used as a positive control in the present investigation. The mice were then placed in an observation box, and the number of writhes was counted for 30 min after acetic acid injection. 3

Hot Plate Test in Mice: The hot plate assay method was employed for preferential assessment of the possible centrally mediated analgesic effect of COEO 4. The analgesic drug, morphine was also used as a positive control substance. Four groups of 6 mice were used. COEO was given to the first and second groups by intraperitoneal injection at the doses of 10 and 20 mg/kg. Morphine (5 mg/kg, i.p.) and the vehicle (sweet almond oil, 10 ml/kg) were also administered in the third and fourth groups by the same route. Each animal was then placed gently onto a 55 ºC hot plate. Latency to exhibit nociceptive responses, such as licking paws or jumping off the hot plate, was determined 15, 30, 60, and 120 min after the administration of the test substances or vehicle 4.

Carrageenan-Induced Paw Edema Test in Rat: Acute anti-inflammatory activity was evaluated based on paw edema inhibition induced by the injection of 0.1 ml 2% carrageenan into the sub-plantar region of the right hind paw of the rat 5. Male rats were divided into four different groups of 6 animals each that separately received COEO (50 and 100 mg/kg, i.p.), Mefenamic acid (30 mg/kg, i.p.), and the vehicle, sweet almond oil (10 ml/kg, i.p.) 30 min before the injection of carrageenan. The paw volume was measured after 0.5, 1, 2, 3, and 4 h after the carrageenan administration using a Plethysmometer (model PM 4500, Borj Sanat Co., Iran).

Anti-inflammatory activity was revealed as the inhibition percent of the edema when compared with the control group. The percentage inhibition of edema was calculated by the following equation:

Analysis of the Essential Oil: Analysis of the oil sample was performed on an HP-6890 gas chromatograph (GC) equipped with a FID and a DB-5 capillary column, 30 m × 0.25 mm, 0.25 μm film thickness, temperature programmed as follows: 60 °−240 °C at 4 °C/min. The carrier gas N2 was at a flow of 2.0 mL/min; the temperatures of injector port and detector were 250 °C and 300 °C, respectively. Samples were injected by splitting, and the split ratio was 1:10. The analysis of GC/MS was performed on a Hewlett-Packard 6890/5972 system with a DB-5 capillary column (30 m × 0.25 mm; 0.25 μm film thickness. The operating conditions were the same conditions as described above but the carrier gas was He. Mass spectra were taken at 70 eV. The range of scan mass was from 40-400 m/z at a sampling rate of 1.0 scan/s. Quantitative data were obtained from the electronic integration of the FID peak areas. The components of the oil were identified by their retention time, retention indices, relative to C9-C28 n-alkanes, computer matching with the WILEY275.L library and as well as by comparison of their mass spectra with those of authentic samples or with data already available in the literature 6, 7. The percentage of composition of the identified compounds was computed from the GC peaks areas without any correction factors and was calculated relatively.

Statistical Analysis: The results are expressed as Mean ± Standard Error of mean. Comparisons between groups were made by one-way ANOVA analysis followed by the post hoc Tukey’s test and P<0.05 was considered as the significant difference of means. The data were analyzed using the GraphPad Prism 6 statistical software.

Antinociceptive Activity of COEO: The intraperitoneal administration of COEO (10 and 20 mg/kg) significantly decreased the number of acetic acid-induced writhes in mice compared to the animals that received vehicle only Fig. 1. Antinociceptive activity of COEO was found to be comparable with the standard group (mefenamic acid). 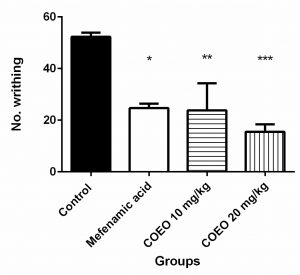 Using the hot plate test, it was shown that the intraperitoneal administration of COEO could not prolong the reaction time at several time points after treatment, as compared to the corresponding control group Fig. 2. 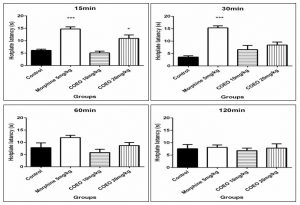 Anti-inflammatory Activity of COEO: The acute anti-inflammatory effect of COEO in rat paw edema induced by carrageenan was tested using the essential oil administered intraperitoneally Fig. 1. COEO (50 and 100mg/kg) could not completely inhibit the carrageenan-induced rat paw edema formation, which was determined at first to the forth hours of the experiment (peak of edema formation). 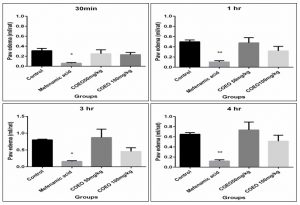 FIG. 3: EFFECTS OF COEO AND MEFENAMIC ACID ON RAT PAW EDEMA INDUCED BY CARRAGEENAN. RAT WAS PRETREATED WITH VEHICLE (10 ml/kg), MEFENAMIC ACID (30 mg/kg) AND COEO (50 and 100 mg/kg, i.p.) 30min BEFORE CARRAGEENAN INDUCED PAW EDEMA. MEASUREMENTS WERE PERFORMED AT THE TIMES 0, 0.5, 1, 2, 3 AND 4 H AFTER THE SUB PLANTAR INJECTION OF CARRAGEENAN. Each value represented the mean ± SEM (n=6). *P<0.05 and **P<0.01 compared to the control group using one-way analysis of variance (ANOVA) followed by Tukeyʹs post hoc test.

The hydrodistillation of C. olivieri aerial parts gave yellowish oil with pleasant odor and yield of 2.3% (v/w) based on the fresh weight. As shown in Table 1, twenty-two components were identified in this oil which presented about 90.6% of the total chromatographical material. The major constituent of the oil was Piperitone (66.0%).

ªCompounds listed in order of elution. bKI (Kovats index) measured relative to n-alkanes (C9-C28) on the non-polar DB-5 column under condition listed in the Materials and Methods section. cKI, (Kovats index) from literature.

DISCUSSION: Different preparations made from C. olivieri are commonly used in ethnobotanical practices for the treatment of pain and inflammation in Iran. In this study, we evaluated the efficacy of the essential oil of C. olivieri aerial part since the volatile constituents comprise the main components of that part. The results observed in the current study showed it to be the first report describing the analgesic and anti-inflammatory activities from COEO in Iran. The results demonstrated that the essential oil decreased the abdominal constriction, indicating the inhibition of the expression of prostaglandin synthesis by the cyclooxygenase pathway 8. Although in hot-plate tests, the studied doses of COEO were not effective. Therefore the peripheral antinociceptive action was confirmed in this way.

COEO (100 mg/kg) also showed activity against acute inflammation. Carrageenan-induced edema has been commonly used as an experimental animal model for acute inflammation and is believed to be biphasic. The results for the paw edema showed moderate reduction at the dose of 100 mg/kg. The inhibitory activity shown by COEO during a period of 3 h in carrageenan-induced paw inflammation was less than that exhibited by the group treated with Mefenamic acid. These results indicate that COEO acts in later phases, probably involving arachidonic acid metabolites, which produce edema dependent on neutrophils mobilization 10. Since studies demonstrated that the injection of carrageenan into the rat paw induced the liberation of bradykinin, which later induced the inflammation of prostaglandin and other autacoids, which were responsible for the formation of the inflammatory exudates 11, it was possible that Piperitone presented in COEO moderately inhibited the biosynthesis of prostaglandins. According to the results COEO, in the studied doses, could not be considered as a potent natural anti-inflammatory agent.

CONCLUSION: The obtained results justified the use of this plant as a natural analgesic agent in Iranian traditional medicine, but according to the results, COEO could not be considered as a potential candidate to relieve inflammation.