INTRODUCTION: Inflammation, a defensive response of living mammalian tissues to any injurious agent, is characterized with marked edema, leukocyte infiltration and granuloma formation 1. The recruitment of macrophages and neutrophils, leads to induction of cyclooxgenase-2 (COX-2) and inducible nitric oxide synthase (iNOS) 2, are responsible for the initiation and progression of acute or chronic stages of inflammation3. Nitric oxide (NO), released due to the activation of iNOS4, is responsible for vasodilatation, increased vascular permeability, edema and granuloma formation. The modern medication as steroidal and non- steroidal anti-inflammatory drugs (NSAID’s), are attributed with certain side effects and toxic manifestations. Therefore, various plants have been preferred, as recommended by alternative systems of medicine, for treating inflammatory pathological conditions 5.

Preparation of the plant extracts: the powdered rohitaka bark (500g) was extracted with 95% ethanol using a soxhlet extractor. The extract was concentrated using rota- evaporator. This ethanolic extract (yield 8.6 %, w/w) of Tecomella undulate bark was further fractioned to obtain butanolic and aqueous fractions.

Animals: the experiments were carried out using wistar albino rats (180-240 g) and Swiss albino mice (25-30 g) of either sex procured from animal house, ISF College of Pharmacy, Moga, Punjab. They were maintained on food pellets and water ad libitum. The temperature and humidity were maintained at 20 - 25ᵒc and 45-50% respectively. Animals were housed fewer than 12 - 12 hrs light/dark cycles. The animals were acclimatized for at least 5 days to the laboratory conditions before doing experiments. The experimental protocol was approved by the institutional animal ethics committee (IAEC) and the care of laboratory animals was taken as per the guidance of CPCSEA.

Chemicals: Carrageenan was purchased from Sigma Aldrich, USA. All the chemicals or reagents obtained from reputed firms in India of analytical grade were freshly prepared.

Preliminary Phytochemical Screening: Qualitative screening of the extract was made to investigate the major chemical classes of components present. It was screened for the presence of alkaloids, anthraquinones, tannins, flavonoids, glycosides, terpenes, phenols and steroids.

Acute Toxicity Studies: Acute oral toxicity studies were performed according to OECD guidelines. Swiss albino mice (n= 5) of either sex selected by random sampling technique were employed in study. The animals were fasted for 4 h with free access to water only. Rohitaka: butanol and water fractions (suspended with 8% propylene glycol and distilled water respectively) were administered orally at the dose of 50 mg/kg initially and mortality was observed for 3 days. If mortality was not observed, the procedure was then repeated with higher doses such as 200, 1000 and 2000 mg/kg.

Carrageenan Induced Paw Oedema in Rats: The rats were divided into five groups: control, Rohitaka: butanolic extract (200 and 400 mg/kg), Rohitaka: water extract (200 mg/kg), and Indomethacin (10 mg/kg) as standard, each comprising six animals. Acute inflammation was induced by subplantar administration of 0.1 ml of carrageenan (1%). Test drugs were administered orally, 1 hr before administration of carrageenan. The paw volume was measured prior to injection of carrageenan (0 hr) and then at predetermined interval of 1 hr upto 3 hrs. Paw volume was measured using Plethysmograph 11.

The rats were anesthetized with intraperitoneal administration of Kitamine hydrochloride (70 mg/kg, i. p.). After shaving the fur, 50 mg of sterile cotton pellets were surgically implanted in both sides of interscapular region. The test drugs, vehicle and standard drug were allowed to administer for 7 consecutive days. On the 8th day, blood was collected through retro orbital plexus for serum nitrite/nitrate estimation. Rats were sacrificed; cotton pellets were removed surgically and dried at 60 oC for 8 hrs. Dry weight of the pellet was taken as measure of granuloma formation12.

Measurement of Serum Nitrite/Nitrate Concentration: Total nitrite/nitrate in serum, an indicator of nitric oxide (NO) synthesis, was measured by Griess reaction. Briefly, add 500 µl of Griess reagent [0. 1 % (w/v) naphthylethylendiamide dihydrochloride in H2O and 1% (w/v) sulphanilamide in 5 % (v/v) concentrated H3PO4, 1:1] to 100µl of serum sample. The optical density at 540 nm was measured using UV spectrophotometer. Nitrite concentration was calculated by comparison with OD540 of standard molar solutions of sodium nitrite 13.

Effect of Drug Treatment on Carrageenan Induced Rat Paw Edema: In acute inflammation animal model, the subplantar injection of carrageenan caused a time dependent increase in paw volume at 1 h, 2 h and was maximal at 3 h in control group. However, the entire test drugs except RWF - 200, showed significant reduction in paw volume during 1st and 2nd h. Moreover, pretreatment with butanolic fractions of Rohitaka (200 & 400 mg/kg) and indomethacin markedly attenuated (p < 0.005) the carrageenan induced paw edema during 3rd h by 26.6%, 17.6% and 10.18% respectively (Figure 1). 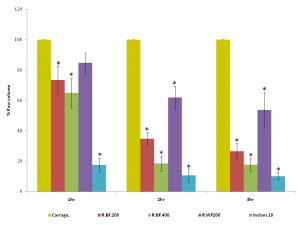 Carrageennan model is attributed to cause paw edema in the form of acute inflammatory response11 which involves increased capillary permeability, leukocyte infiltration initially; migration of neutrophils and macrophages; and activation of cyclooxygenase and lipoxygenase enzymes14. This leads to secretion of pro-inflammatory mediators: histamine, bradykinin and prostaglandins15. In this study, the subplantar injection of carrageenan produced marked edema characterized with plasma protein extravasation and exudation16. However, the T. undulate: butanolic fraction was significantly prevented the states of inflammation progressively; indicating the inhibition of histamine and cyclooxygenase (COX) induced prostaglandins release (Fig. 1). However, in another study, methanolic extract of bark did not shown any significant effect on Carrageennan induced paw edema17.

In chronic inflammatory study, the transudative, exudative and proliferative phases are appeared18, showing granuloma formation as evidenced in present study. Further, it is attributed with monocyte, neutrophil infiltration, fibroblast proliferation; and exudation19. In this study, butanolic fraction of T. undulate lowered weight of cotton pellets as compared to control groups (Table: 1). This may be due to the potential of T. undulate in preventing fibrogenesis, collagen and mucopolysaccharide synthesis, which are natural proliferative events of granulation tissue formation20. The inflammatory reaction is characterized with induction of PGs, cytokines and iNO synthase, producing (NO) 3. NO is responsible for vasodilatation, increased vascular permeability and edema formation21. T. undulate: butanolic fraction markedly inhibited the level of NO in present study (Table 2). The mechanism responsible for NO inhibition may involve prevention of iNOS activity and it could be implicated in suppression of PGs generation. Moreover, the water fraction of T. undulate showed mild effect against acute and chronic inflammatory conditions in successive hours, and this effect may be due to less availability of active constituents, as compared to butanolic fraction.

CONCLUSION: Conclusively, the results suggest that Tecomella undulate has marked effect in attenuating experimental acute and chronic inflammatory reactions in rat. This effect may be due to the presence of iridoid glucosides, tannins, flavones and terpenes, present in the plant as reported earlier. In addition, the study provides a scientific rational to its therapeutic use. Future studies may be designed to isolate and characterize the active plant component and its putative mechanisms of prevention in inflammatory conditions.