Aegle marmelos Corr. (Rutaceae), commonly known as Bael, Bengal Quince is a tree of Indian origin, well known from pre- historic time. Utilization of bael fruit in day-to-day life has a great nutritional, environmental as well as commercial importance. All the parts of this tree including stem, bark, root, leaves, fruit and seeds at all stages of maturity has medicinal virtues and has been used in Ethno-medicine to exploits its medicinal properties including antidiarroheal, antidysentric, antipyretic and anti inflammatory activities. Compounds purified from bael fruit have been proven to have biological potential against several diseases like diabetes, gastric ulcer and hyperlipidaemia. It should also be indicated that the therapeutic activities of few isolated constituents have also proven to possess antibacterial, antiviral, antioxidant and radioprotective activities. Thus the purpose of this abstract is to explore the pharmacological potential of some crude extracts of bael fruit.

INTRODUCTION: World is endowed with a rich wealth of medicinal plants. Man cannot survive on this earth for long life without the plant kingdom because the plant products and their active constituents play an important role. Herbs have always been the principal form of medicine in India and presently they are becoming popular throughout the world, as people strive to stay healthy in the face of chronic stress and pollution, and to treat illness with medicines that work in count with the body’s own defense. There is a widespread belief that green medicines are healthier and more harmless or safer than synthetic ones. Medicinal plants have been used to cure a number of diseases. Though the recovery is slow, the therapeutic use of medicinal plant is becoming popular because of its inability to cause side effects and antibiotic resistant microorganisms 1. Aegle marmelos (L.) Correa commonly known as Bael/Bilva belonging to the family Rutaceae is another Indian plant which has enormous traditional uses against various diseases and many bioactive compounds have been isolated from this plant also. Although this plant is native to Northern India it is also widely found throughout the Indian peninsula and in Ceylon, Burma, Thailand and Indo-China 2. A. marmelos tree is held sacred by Hindus and offered in prayers to deities Lord Shiva and Parvati and thus the tree is also known by the name Shivaduma (the tree of Shiva). Hindus also believe that goddess Lakshmi resides in Bael leaves. It is therefore widely cultivated and commonly found in the vicinity of temples. All parts of this tree, viz. root, leaf, trunk, fruit and seed are useful in several ailments. The major chemical constituents isolated from Aegle marmelos fruit are marmelosin, luvangetin, psoralen, tannins, marmin are listed below in the (table 1) and are the major topic of discussion in this review 3.

TABLE 1: BIOACTIVE COMPOUNDS OF AEGLE MARMELOS CORR. AND THEIR ACTIVITY 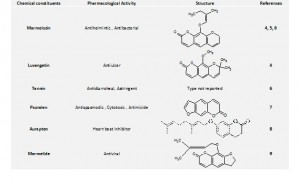 Antidiabetic activity: Diabetes mellitus (DM) is the most common endocrine disorder that affects more than 100 million people worldwide (6% of the population). It is caused by the deficiency or ineffective production of insulin by pancreas which results in increase or decrease in concentrations of glucose in the blood. The effect of Aegle marmelos fruit extract in streptozotocin induced diabetes, a histopathological study was evaluated for its antidiabetic property. This study was designed to elucidate the protective effect of an aqueous extract of Aegle marmelos fruits on the histopathology of the pancreas in streptozotocin-induced diabetic rats.

Oral administration of Aegle marmelos fruit extract at doses of 125 and 250 mg/kg twice daily to diabetic rats for a period of 30 days resulted in a significant increase in body weight, weight of the pancreas and insulin levels associated with a significant decrease in fasting blood glucose levels. The fruit extract treated groups showed improved functional state of the pancreatic β-cells and partially reversed the damage caused by streptozotocin to the pancreatic islets. The findings of our study indicate that Aegle marmelos fruit extract exhibits protective effects on the pancreas. The effects observed in the fruit extract treated animals were better those in animals treated with glibenclamide (300µg/kg). Figure 1 below represents the effect of bael extract on blood glucose level 10,11,12,13.

Antioxidant activity: Oxidative stress produced during normal metabolic processes in the body as well as induced by a variety of environmental and chemical factors causes generation of various reactions free radicals and subsequent damage to the macromolecules like DNA, proteins and lipids. In artificially induced diabetic animals the lipid peroxidation level was evaluated using aqueous extract of A. marmelos fruit. In this oral administration of AMFEt for 30 days (125 and 250 mg kg-1 body weight twice daily) produced a significant decrease in the elevated levels of peroxidation products, viz. thiobarbituric acid reactive substances and hydroperoxides in the tissues of diabetic rats. The depressed activities of superoxide dismutase, catalase and glutathione peroxidase and lowered glutathione content in the heart and pancreas of diabetic rats were found to increase on treatment with AMFEt. AMFEt at a dose of 250 mg kg -1 was more effective than glibenclamide (300 µg kg -1) and both reversed all the values significantly. Thus AMFEt exhibits anti-oxidative activity in streptozotocin diabetic rats. Figure1 below demonstrates the mechanism of action of antioxidant property of bael fruit extract 15, 16.

Antidiarrhoeal and Antidysentric activities: The unripe or falf riped fruit is the most effective remedy for chronic diarrhea and dysentery without fever. The A. marmelos fruit pulp has been shown to possess antiprotozoal activity in chronic dysentery condition accompanied by loose stool alternately with occasional constipation. The unripe fruit used in different formulations for treatment of chronic diarrhea. After the use of the fruit powder in these conditions, the blood gradually disappears and the stool resume a more feculent and solid form. The mucous also disappears after continued use for sometimes 2, 17, 18.

Radioprotective activity: Recently radiotherapy is one of the most important therapies to cure cancer particularly for those who are suffering from vital visceral malignancies. A large number of cancer patients are regularly being cured all over the world with this treatment. However, the radiotherapy also has some side effects. The hydroalcoholic extract of bael fruits have also been studied for its radioprotective effect in mice expose to various doses of gamma radiation. The extract (20mg/kg) is administered intraperitoneally for 5 consecutive days before irradiation of gamma ray has been found to afford maximum protection as evidenced by highest number of survivors after 30 days post-radiation 20, 21, 22.

Antiviral activity: Virus is the smallest pathogen with its dual form: a living entity inside the host body and non- living inert form outside the host. This causes various seasonal outbreak including conjunctivitis and influenza and usually does not respond to any synthetic drugs. It is very important to develop antiviral drugs from natural bio-resources to overcome these problems. The 50% ethanolic bael fruit extract have shown antiviral activity against Ranikhet disease virus. The fruit extract has also reported interferon-like activity against the same virus but not against vaccinia virus. Marmilide is the most effective viricidal agent interfering with early events of replicating cycle. Thus bael fruit has better viricidal potential and may be exploited as a potent antiviral agent in near future 20. The probable mechanism of action of A. marmelos extract against Viruses is described below in fig. 2. 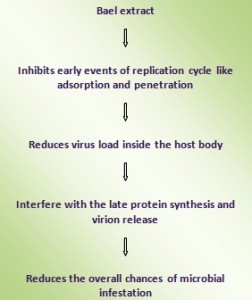 FIG. 2: DIAGRAMMATIC REPRESENTATION OF MECHANISM OF ACTION OF ANTIVIRAL ACTIVITY ON A. MARMELOS EXTRACT

Antiulcer activity: An infusion of leaves is an effective remedy for peptic ulcer. The fruit taken in the form of beverage has also great healing potential on account of its mucilage, which forms a coating on the stomach mucosa and thus helps in the healing of ulcers. This activity is due to the compound Luvangetin present in the fruit 20 (fig. 3). 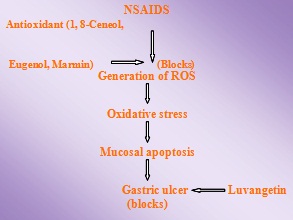 FIG. 3: DIAGRAMMATIC REPRESENTATION OF MECHANISM OF ACTION OF ANTIULCER ACTIVITY

Antibacterial activity: Bacteria are the most versatile unicellular pathogens, which are normally transmitted through soil, water, air and food and cause diseases in human being and animals. Such type of diseases could be treated with various natural products including bael. Methanolic and aqueous extract of bael fruit have shown strong action against multi resistant Salmonella typhi. The methanolic extract is more potent than the aqueous extract. The Minimum Inhibitory Concentration (MIC) value of methanolic extract is around 256µg/ml. Thus it is evident that bael fruit has antibacterial activity and the mechanism of action may be the blockade of protein synthesis either at transcription or at translational level and/or peptido-glycan synthesis at membrane level 1, 23. The mechanism of action of antibacterial activity of A. marmelos is given in fig. 4. 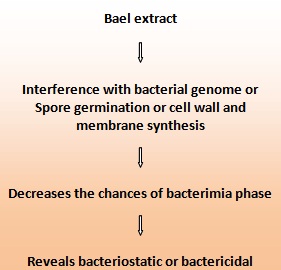 FIG. 4: DIAGRAMMATIC REPRESENTATION OF MODE OF ACTION OF ANTIBACTERIAL ACTIVITY OF A. MARMELOS FRUIT EXTRACT.

Constipation: Ripe fruit is regarded as best of all laxatives. It cleans and tones up the intestine. Its regular use for two to three months helps in evacuation of even the old accumulated fecal matter from the bowels. For best results, it should be taken in the form of Sherbat, which is prepared from the pulp of the ripe fruit 24.

Miscellaneous uses: The fresh ripe pulp of the higher quality cultivars, and the "sherbet" made from it are taken for their mild laxative, tonic and digestive effects. A decoction of the unripe fruit, with fennel and ginger, is prescribed in cases of hemorrhoids. It has been summarized that the psoralen in the pulp increases tolerance of sunlight and aids in the maintaining of normal skin color. It is employed in the treatment of leucoderma. Marmelosin derived from the pulp is given as a laxative and diuretic. In large doses, it lowers the rate of respiration, depresses heart action and causes sleepiness. For medicinal use, the young fruits, while still tender, are commonly sliced horizontally and sun-dried and sold in local markets. They are much exported to Malaya and Europe. Because of the astringency, especially of the wild fruits, the unriped bael is most prized as a means of halting diarrhea and dysentery, which are prevalent in India in the summer month 24, 25, 26.

CONCLUSION: Looking upon wide prospects and potential of bael for various purposes, it is worthwhile to cultivate this plant on large scale especially on unproductive and wasteland. This will help in financial upliftment of the poor and landless farmers besides providing base for the Research and Development of best, cheap and efficacious drug. Furthermore, systematic and scientific research is required to explore the maximum potential of this under-utilized plant. Authors are of the opinion that we Indians equipped with modern scientific techniques and enriched with strong knowledge are best suited and well placed to harness the maximum potential of this Plant of Panacea for human and environmental well being 24.