The present study was designed to investigate in vivo analgesic and cytotoxicity as well as in vitro antibacterial activities of the methanol: ethylacetate (1: 9) extract of the flowers of Peltophorum pterocarpum. Analgesic activity was assayed by acetic acid induced assay method wherein the extract showed moderate activity in a dose dependent manner. In respect of in vivo cytotoxicity, the flower extract of Peltophorum pterocarpum showed moderate activity with 30% cell growth inhibition against Ehrlich Ascites Carcinoma (EAC) cells at a dose of 50mg/kg. Moreover, Antibacterial test were done against five Gram-positive and four Gram-negative bacteria. Flower extract was active against all tested microbial species except Staphylococcus aureus and the zone of inhibition range was found to be 12±0.32 to 18±0.11 mm.

INTRODUCTION: Medicinal plants from time immemorial have been used in virtually all cultures as a source of medicine 1.  They are considered as the backbone of traditional medicine and are widely used to treat a plethora of acute and chronic diseases ranging from the common cold to complex human diseases all over the world. Due to the shortcomings of currently available drugs there has been continuing interests in the study of medicinal plants for discovery of new pharmacotherapeutic agents 2.

Bangladesh is an attractive repository of various medicinal plants 3. Thus, exploring such abundant natural gifts, hundreds of traditional medicines has been developed in the form of Ayurvedic and Unani formulations in Bangladesh4. Proper scientific evaluation of the pharmacological properties of these plants, used in different formulations, would carry enormous potential and promise for the 21st century.

The frequency of life-threatening infections caused by pathogenic microorganisms has increased worldwide and become a prime factor of morbidity and mortality in immune compromised patients in developing countries and many infectious microorganisms are resistant to synthetic drugs and hence an alternative therapy is very much needed 5. Moreover, it is presumed that the broad spectrum effectiveness of plant species may provide a suitable basis for new antimicrobial therapies 6.

Cancer, the second leading cause of death worldwide next to cardiovascular diseases, is a group of more than 100 different diseases, characterized by uncontrolled cellular growth, local tissue invasion, and distant metastases 7. Multidisciplinary scientific investigations are making best efforts to combat this disease, but the sure-short, perfect cure is yet to be brought into world medicine. Plants have a long history of use in the treatment of cancer.

Over 60% of currently used anti-cancer agents are derived in one-way or another from natural sources, including plants, marine organisms and microorganisms 8.

Pain is defined as neuralgia, an unpleasant sensory experience associated with tissue damage, Such as injury, inflammation or cancer, but severe pain can arise independently of any obvious predisposing cause, or persist long after the precipitating injury has healed9. There are many herbs that are very useful and effective for pain relief. Many are safe for everyone but some should be avoided during pregnancy or while nursing 10.

Peltophorum pterocarpum (Copperpod, Golden Flamboyant, Yellow Flamboyant, Yellow Flame Tree, Yellow Poinciana and Radhachura in Bangla) is a family of Fabaceae, native to tropical southeastern Asia and a popularly ornamental tree grown around the world. Upon literature evaluation it was found that the plant is traditionally used in the treatment of unhealthy skin, ringworm, constipation, insomnia and stomatis 11. The phytochemical investigation on Peltophorum pterocarpum leaves resulted in the isolation of eight flavonoids among which a unique flavone was able to inhibit acetylcholinesterase as well as possesses cardiotonic activity 12.

Literature reviews indicated that no studies combining the analgesic, cytotoxicity as well as antibacterial of the flowers of Peltophorum pterocarpum have so far been undertaken. Taking this in view and as a part of our ongoing research 14, 15 on Bangladeshi medicinal plants, the present study aimed to evaluate the in vivo cytotoxicity of flower extract of Peltophorum pterocarpum along with their analgesic and antibacterial activities.

Plant materials: Flowers of Peltophorum pterocarpum were collected from the adjoining area of Rajshahi University Campus, Bangladesh during the month of April 2009 and were identified by Taxonomist, Department of Botany and University of Rajshahi, Bangladesh where a voucher specimen (Voucher No # 27) has been deposited for future references.

Preparation of extracts: The flowers of P. pterocarpum were dried in an oven at 37oC and then pulverized into course powder with a mechanical grinder, passing through sieve #40, and stored separately in an air tight container. The dried powdered materials (1.0 kg) each, extracted three times by sonication for 30 min with MeOH: EtOAc (1:9) mixture (1000ml) and then filtered. The total filtrate of both was concentrated to dryness, in vacuo at 40oC to render the crude extracts 120g.

Screening of in vivo cytotoxic activity:

Animal: Albino mice (25-30g) of both sexes were used for assessing biological activity. The animals were maintained under standard laboratory condi­tions and had free access to food and water ad libitum. The animals were allowed to acclimatize to the environment for 7 days prior to experimental session. The animals were divided into different groups, each consisting of five animals which were fasted overnight prior to the experi­ments. Experiments on animals were performed in accor­dance with guidelines of the Institutional Animal Ethics Committee, Atish Dipankar University of Science & Technology, Dhaka, Bangladesh.

Transplantation of tumor: Ehrlich ascites carcinoma (EAC) cells were obtained from Indian Institute of Chemical Biology (IICB), Calcutta, India. The EAC cells were maintained in vivo in Swiss albino mice by intraperitoneal transplantation of 2×106 cells per mouse after every 10 days. Ascitic fluid was drawn out from EAC tumor bearing mouse at the log phase (days 7-8 of tumor bearing) of the tumor cells. Each animal received 0.1 ml of tumor cell suspension containing 2×106 tumor cells intraperitoneally.

Acetic acid-induced writhing test: 20 Swiss albino mice were divided into six groups (n = 5) and given food and water ad libitum. The analgesic activity of the samples was studied using acetic acid-induced writhing model in mice. Test samples (Group III and IV) and vehicle (Group I) were administered orally 30 min before intraperitoneal administration of 0.7% acetic acid but Diclofenac-Na was administered intraperitoneally (Group II) 15 min before injection of acetic acid. After an interval of 5 min, the mice were observed for specific contraction of body referred to as ‘writhing’ for the next 10 min 17.

Antibacterial assay: Sterile 6.0 mm diameter blank discs (BBL, Cocksville, USA) were impregnated with test substances at the dose of 200 µg/disc. This disc, along with standard discs (Ciprofloxacin, Oxoid Ltd, UK) and control discs were placed in petri dishes containing a suitable agar medium seeded with the test organisms using sterile transfer loop and kept at 4oC to facilitate maximum diffusion. The plates then kept in an incubator (37oC) to allow the growth of the bacteria. The antibacterial activities of the test agents were determined by measuring the diameter of the zone of inhibition in terms of millimeter.

The total area of the inhibition was calculated by using area = πr2; where, r = radius of the zone of inhibition.

Statistical analysis: All values were expressed as the mean ± standard error of the mean (SEM) of three replicate experiments and were analyzed using the GraphPad program (GraphPad, San Diego, CA, USA). The analysis was performed by using student’s t test. p<0.001 were considered to be statistically significant.

RESULT AND CONCLUSION: In vivo cytotoxicity of extract against EAC tumor bearing mice was assessed by the parameter % of cell growth inhibition. Flower extract showed moderate cell growth inhibition and was found to be 30% (Figure 1). A number of scientific reports indicate certain terpenoids, steroids and phenolic compounds such as tannins, coumarins and flavonoids have a chemo preventive role in cancer through their effects on signal transduction in cell proliferation and angiogenesis 20. 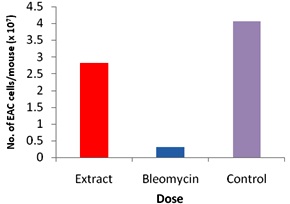 Furthermore, flavonoids such as quercetin, kaemferol and their glycosides have been shown to possess antimutagenic and antiproliferative effect in various cancer cell line 21.

The in vivo cytotoxicity activities of P. pterocarpum are probably due to the presence of tannin, terpenoids, steroids as well as other bioactive compound.  The extract effectively reduced the number of abdominal muscle contractions induced by 0.7% acetic acid solution in a dose dependent manner (Table 1). Acetic acid-induced writhing model represents pain sensation by triggering localized inflammatory response. Such pain stimulus leads to the release of free arachidonic acid from the tissue phospholipid 22.

Values are Mean ± SEM (n=5); **p < 0.05 by student’s t test for values between the extract and the vehicle treated group

The acetic acid induced writhing response is a sensitive procedure to evaluate peripherally acting analgesics the response is thought to be mediated by peritoneal mast cells 23, acid sensing ion channels 24 and the prostaglandin pathways 25. Table 2 expresses the antibacterial activity (zone of inhibitions) of the flowers of the P. pterocarpum. Flower extract at a dose of 200 µg/disc showed prominent activity against all the tested bacteria except Staphylococcus aureus where the zone of inhibition range was found to be 12 ± 0.32 to 18 ± 0.11 mm. The highest zone of inhibition was found against Escherichia coli and Bacillus subtilis (zone of inhibition of both 18 ± 0.02 and 18 ± 0.11  mm, respectively), followed by Bacillus megatherium and Shigella boydii (zone of inhibition of both 15 and 17 mm, respectively) whereas the moderate activity was shown against Pseudomonas aeruginosa, Shigella flexneri, Bacillus cereus and Bacillus anthracis.

a Values of the observed diameter zone of inhibition (mm) excluding cap diameter. Incubation conditions for bacteria – 24 hours at 37oC. Assay was performed in triplicate and results are the mean of three values ± Standard Deviation. b Reference standard; Kanamycin. NA- Zone of inhibition < 5 mm consider as no activity. Parenthesis indicate the relative percentage of inhibition

Flower extract of P. pterocarpum showed the maximum relative percentage inhibition against Bacillus subtilis (51.84%) followed by Shigella boydii (50.17%) and E. coli (47.92%) whereas no relative percentage inhibition activity was found against Staphylococcus aureus (Table 2). Antimicrobial activities of tannins 26, flavonoids 27, saponins 28, terpenoids 29, and alkaloids 30 have been documented. Previous Phytochemical studies of this plant revealed that tannins, flavonoids, as well as steroidal glycoside are the main chemical constituents of plant. So, the highest antimicrobial activity showed by the extract of P. pterocarpum may be due to presence of such type of phytoconstituent.

CONCLUSION: The results of the present study indicate that P. pterocarpum exhibits interesting analgesic, cytotoxic as well as antimicrobial properties.  These results of the investigation do not reveal that which chemical compound is responsible for aforementioned activity. Now our next aim is to investigate the isolation and structure determination of the lead compound liable for aforementioned activity from this plant and work is going on in this respect in our laboratory.