ABSTRACT: Diabetes is a non communicable chronic metabolic disease characterized by high blood glucose level in the body. Targeting alpha amylase to control diabetes has long been studied. This study focused on developing pharmacophore model for set of inhibitor that possess anti amylase activity based on previous studies. Developing a pharmacophore model for these compound yields a hypothesis of ADDRR.  Furthermore 3D QSAR model is carried out with good correlation activity for training set as .98 and test set as .92. Database screening for the developed model list out top compounds. High throughput virtual screening is performed for this top compound set. Two ligands quercetin 3-glucosyl rhamnosyl galactoside and rhodionin is found to have good binding affinity over alpha amylase

INTRODUCTION: Non communicable chronic diseases have become the major causes of mortality and disease burden worldwide. According to the latest estimates by the International Diabetes Federation (IDF), South East-Asia (SEA) Region account for more than 72 million adults with diabetes in 2013 and is expected to exceed 123 million in 2035 out of which nearly 95% of people have  type 2 diabetes. 1 Thus there is a need for the development of a utile approach to the diabetes prevention as well as understanding its underlying pathophysiology. 2 The improved life style involving a healthy diet, reduced weight and increased physical activity have been observed to have long lasting effects in the prevention of type 2diabetes. 3

The most practical approach involves targeting the carbohydrate metabolism by the inhibition of enzyme alpha amylase and alpha glucosidase. 4 Alpha amylases catalyze the hydrolysis of a-(1,4) glycosidic linkages in starch resulting in the formation di and tri saccharides which are further broken into monomeric glucose by α-glucosidase. 5 Currently several synthetic drugs are available such as acarbose, voglibiose and miglitol which act as inhibitors of digestive enzymes in type 2 diabetic patients. 6 However various side effects, such as flatulence, abdominal distension, diarrhea, and several reports of hepatitis have been observed with the acarbose use, which was not observed after the discontinuation of medication. 7, 8 Therefore attempts have been aimed towards finding natural and comparatively safer α-amylase and α-glucosidase inhibitors.

The present study was focused for the identification of novel inhibitors for the α-amylase from medicinal plants. Pharmacophore analysis was done to identify the active functional groups responsible for the binding of inhibitor in the active site of amylase. QSAR studies and regression coefficient analysis were performed to identify the reliability of model. Finally database screening was done against 1,60,000 natural compounds from database like pubchem, ZINC to identify best hits. Molecular docking was done for the top hits to calculate its binding affinity over α-amylase.

A set of 30 alpha amylase inhibitors with known IC50 are collected based on the previous reports by 8, 9, 10 11, 12 13 14, 15 shown in Table 1. The 2D structure of 30 compounds are shown in Fig 1. IC50 values were converted into PIC50 which indicates the negative logarithm of IC50 values. Pharmacophore mapping were made using PHASE (2009) and compounds are partitioned into active and inactive set. 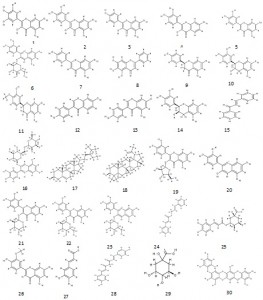 TABLE 1: A SET OF 30 COMPOUNDS PARTITIONED INTO ACTIVE AND INACTIVE BASED ON PIC50 FOR PHARMACOPHORE MODELING

Ligand preparations were done using which lead to the development of energy minimized structures. It results in the addition of hydrogen and Neutralization of charged acidic or basic groups 16. For conformer generation, Confgen module was used 17. The output of the Confgen may have high energy compounds which are processed to remove those conformers before going into the next step. Then total number of conformation per rotatable bond was kept 100 using OPLS_2005 Force field. Distance dependent dielectrics were used for solvation treatment. The RMSD cutoff was set to 1Å to remove possible duplicate entries.

Site points are generated based on six pharmacophore features such as hydrogen bond donors, hydrogen bond acceptors, aromatic ring, hydrophobic groups, cations and anions. Site points are the active groups in the ligand that binds to receptor atoms. Common pharmacophore were identified using tree based partitioning technique. Common pharmacophore hypotheses (CPH) are calculated from highly active set of conformations which were examined using scoring function to get best alignment with RMSD box size of 1.2 Å.

Quantitative structure activity relationship (QSAR) was used to predict the biological activity of the molecule based on its structure. Models were developed by partitioning the compound into training set and tests set. All hypotheses were generated and scoring was done to build pharmacophore-based QSAR models while setting the grid spacing value at 1.0Å. QSAR model are represented as cubes. Cubes are colored according to their coefficient values. Positive coefficient represented in blue color indicates increase in the pharmacophore activity. Negative coefficients which indicate low activity were represented in red color.

Virtual screening of databases was used to identify novel compounds with highest activity. Screening were done 1,60,000 natural compounds from PubChem 18  and ZINC database 19 to obtain best ligand that matched the selected hypothesis.

Molecular docking studies were performed for ligands identified with highest activity to determine the binding pose and affinity in the active site of α-amylase. Docking was done using Glide 5.5. Crystal structure of α-amylase was obtained from PDB with PDB ID of 1HNY 20 which was used for protein preparation using Protein preparation wizard a module of Glide 5.5. Site map was used to determine the binding site in the protein and ligands were docked. Ligands were ranked based on their binding energy and interaction pattern was analyzed for docked structures.

Pharmacophore models were generated keeping a terminal box size of 1Å with different active molecules using a tree based partition algorithm. To find the common pharmacophore hypothesis, the dataset was divided into active and inactive set depending on the observed activity. Activities of the compounds are shown in Table 1. The top model was found to be associated with the five-point hypotheses ADDRR, which consists of one hydrogen bond acceptor (A), two hydrogen bond donors (D) and two aromatic rings (R). This is denoted as A7, D20, D17, R21 and R22. The pharmacophoric sites obtained are shown in Fig 2.

These hypothesis was subjected to PLS factor of 3 for QSAR model development. The best hypotheses fitted with an active ligand are shown in Fig 3. 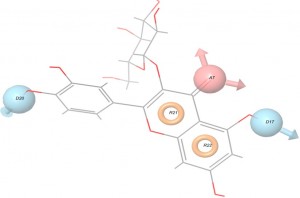 This active ligand was found to be hyperoside.  Angle and distance geometry of pharmacophoric sites are shown in Fig 4.

For the QSAR models generation, inactive molecules in the dataset were then aligned, based on matching with at least three pharmacophore features. These dataset were randomly divided into training set of 19 compounds and the test set of 10 compounds for QSAR study. The best pharmacophore model resulted are ADDRR. Pictorial representation of contours generated from QSAR fitted with active and inactive ligand are shown in Fig 5.

FIG. 5: SCATTER PLOT OBTAINED FOR QSAR MODEL THAT ARE GENERATED a) TRAINING DATA b) TEST DATA.

Virtual screening was done for 1, 60,000 compounds. Since the flexibility of ligand is limited in case of virtual screening docking was performed using Glide. Quercetin 3-glucosyl rhamnosyl galactoside (QGRG) and rhodionin shown in Fig 7 were identified as best ligand from the database.

Interaction of ligand with protein are shown in ligand interaction diagram Fig 8 represent many favourable interactions.

QGRG has been reported to be present in green tea by 21 whereas rhodionin is present in rhodiola species 22. Both green tea and rhodiola are reported to have anti-amylase activity 23, 24, 25, 26, 27, 28, 29 Inclusion of above two plants in normal culinary activity can help us to prevent diabetes. 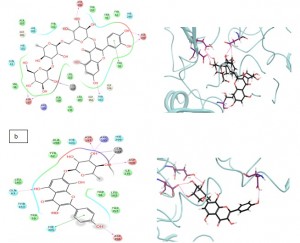 CONCLUSION: The purpose of this study was to construct a pharmacophore model for alpha amylase inhibitor using PHASE module from schrodinger. A five point pharmacophore hypothesis was developed ADDRR which constitute one hydrogen bond acceptor, two hydrogen bond donor and two aromatic rings. 3D QSAR study was carried out on the series of phytochemicals as an alpha amylase inhibitor by generating volume occupied maps, which demonstrated that the activity may be increased by substituting the groups in the pharmacophore features.

Accuracy of QSAR model was evaluated based on regression plot obtained for training set as .98 and test set as .92. Database screening against natural compounds also provide top hits with good binding affinity against alpha amylase. These compounds were also found to be present in medicinal plants and hence inclusion of these plants in normal diet can help prevent diabetes.

ACKNOWLEDGEMENT: I would like to thank SASTRA University for providing the necessary facilities to carry out this research project.

CONFLICT OF INTEREST: There exists no conflict of interest.