PHARMACOTHERAPY OF ALZHEIMER’S DISEASE: A REVIEW

PHARMACOTHERAPY OF ALZHEIMER’S DISEASE: A REVIEW

ABSTRACT: Alzheimer’s disease, the most common cause of dementia is not a normal part of aging and worsens over time. The most common early symptom of Alzheimer's is difficulty remembering newly learned information. Microscopic changes in the brain begin long before the first signs of memory loss. Two abnormal structures called plaques and tangles are prime suspects in damaging and killing nerve cells. Currently, there are five FDA-approved drugs that treat the symptoms of Alzheimer's disease — temporarily helping memory and thinking problems in about half of the people who take them. But these medications do not treat the underlying causes of Alzheimer's. In contrast, many of the new drugs in development aim to modify the disease process itself, by impacting one or more of the many wide-ranging brain changes that Alzheimer's causes. These changes offer potential "targets" for new drugs to stop or slow the progress of the disease. Today, there is a worldwide effort under way to find better ways to treat the disease, delay its onset, and prevent it from developing. The current review looks into the current drug therapy for Alzheimer’s disease and the ongoing research into new drug targets which could treat the underlying pathology.

INTRODUCTION: Alzheimer’s disease (AD) is a progressive degenerative disease of the brain and is the most common (65-75% cases) form of dementia. 1 It is a degenerative disease that attacks the brain resulting in impaired functioning. Dementia is an umbrella term used to describe the symptoms of a group of more than 100 conditions that impair memory, behavior and thinking. Dementia can be defined as a clinical syndrome of loss or decline in memory, intellectual deterioration & other cognitive abilities with changes in personality & behavioural abnormalities. 2

The history of Alzheimer’s disease dates back to 1901 when Dr. Alois Alzheimer observed a 51 year old patient with strange behavioural symptoms, including a loss of short-term memory at the Frankfurt Asylum named Auguste Deter. This patient would become his obsession over the coming years. In April 1906, Mrs. Deter died and Alzheimer had the patient records and the brain brought to Munich where he was working at Kraepelin's laboratory. Extensive research of those brain samples led to the discovery of AD. 3

The 40th American President and actor Ronald Reagan is one of the most famous personalities who suffered from this debilitating illness. Enid Blyton, the eminent writer also fell prey to it. Nasrat Bhutto, the Pakistani politician was a patient of AD as well. 4 According to data from the United States, more than 5 million Americans are living with the disease. Every 67 seconds someone in the US develops Alzheimer’s. There are approximately 500,000 people dying due to AD every year and is a leading cause of death. The prevalence of Alzheimer’s disease increases with increasing age, the highest prevalence being noted after the age of 84 years. 5

The classical symptoms of Alzheimer’s disease can be described as 5As viz. Anomia, Apraxia, Agnosia, Aphasia and Amnesia. There is impairment in judgment, concentration and attention in chronological sequence. As the disease progresses, there is significant impairment in social and occupational functioning. Most of them present with behavioral abnormalities and other psychiatric symptoms. 6

The exact etiology of Alzheimer’s disease is not known. However, various risk factors for the disease are ageing, high intake of saturated fat, presence of ApoE4 allele, diabetes mellitus, hypertension, stroke, head injury, menopause, lower education, depression, sedentary lifestyle, obesity, smoking, alcoholism, hyper-homocysteinemia and a positive family history of AD. 7 Environmental factors are also known to play a role in the development of AD. Exposure to heavy metals such as Aluminum, Mercury, etc. is a known risk factor. 8   Herpes Simplex Virus-1 has also shown some association. 9 Down’s syndrome and presence of Pre-Senilin gene are other risk factors. 10

The schematic diagram Fig.1 explains the pathophysiology of AD and how it leads to dementia. 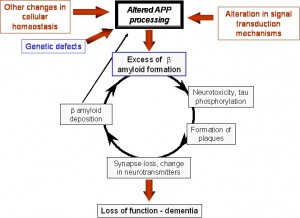 Development of Alzheimer’s pharmacotherapy is based on the various hypotheses proposed at that time frame. Till the pre-1980s, AD was believed to be an idiopathic disease and Nootropics formed the symptomatic line of treatment. In the decade following the 80’s, the cholinergic hypothesis was proposed and a neurochemical deficit was believed to occur in AD. Extensive research on Cholinesterase inhibitors led to the development of Tacrine in 1993, the first acetylcholine esterase inhibitor for AD. In the 1990’s, the Amyloid hypothesis was accepted and research was focused on anti-inflammatories, hormonal agents and antioxidants. However, none of them were efficacious in the disease. In the meantime other Cholinesterase inhibitors, namely Donepezil, Rivastigmine and Galantamine were developed. Research into NMDA (N-Methyl-D-Aspartate) antagonists began early in the 1980’s. However, Memantine, the first NMDA antagonist for Alzheimer’s was approved in 2003. 12

AChE inhibitors offer only symptomatic relief of cognitive impairment in AD and do not modify the disease process such. These drugs inhibit AChE which leads to an increased concentration of Acetylcholine in the synaptic terminals leading to an improvement of cognitive symptoms.

It was the 1st FDA approved drug to treat AD. Food decreases its bioavailability and is thus administered one hour before meals. The half-life of Tacrine is 2 to 4 hours. The dosing schedule is 10 mg tablet QDS initially for 4 weeks followed by a double dose for maintenance. The most significant adverse reaction with tacrine was hepatotoxicity and was hence banned by FDA. Other ADRs such as nausea, vomiting, diarrhea, myalgia and dizziness have been noted. Significant drug interactions are seen with Cimetidine which increases the tacrine concentration. It inhibits the antiparkinsonian effects of levodopa. Theophylline concentration is increased when administered with tacrine. 13

Donepezil: It is one of the most commonly prescribed drugs to treat AD. There is no effect of food on its bioavailability and has a significantly long half-life of 70 hours which facilitates a once daily administration. For the first four weeks, a 5 mg tablet is given one hour before bedtime followed by a 10 mg tablet as maintenance.

Gastrointestinal side effects such as nausea, vomiting, diarrhea and fatigue are seen commonly. A special drug delivery system in the form of dispersible tablets is being developed. 13

Another indication of Rivastigmine is its use in mild to moderate Parkinson’s disease dementia. It is metabolized by esterases and is eliminated by the kidneys with a short half-life of 1-2 hours.

It also leads to a stimulation of nicotinic Acetylcholine receptors. It has a very high oral bioavailability of more than 90%. It is available in two dosage forms- conventional and extended release. It is given as once a day in the extended release capsule as 8 mg to begin with followed by 16 mg and 24 mg with an interval of 4 weeks between each dosage regime. Side effects seen are loss of appetite nausea, vomiting and diarrhea. It decreases the clearance of Amitriptyline, Fluoxetine, and Quinidine and increases the bioavailability of Cimetidine, Erythromycin, and Ketoconazole. An Intranasal device is under evaluation, however it is not approved by the FDA. 13

It is the first NMDA receptor antagonist approved for the management of AD. It is excreted unchanged in urine with a long half-life of 45-80 hours. It is initially started as a 5 mg tablet once daily, followed by the same dose twice daily for one week and increased to 15 mg and 20 mg after one week intervals.

Headache, dizziness, confusion are the commonly noted adverse reactions. Additive antagonistic action is seen with Amantadine, Ketamine. Clearance of Memantine is decreased with Sodium Bicarbonate and Carbonic Anhydrase inhibitors. The plasma concentration of Cimetidine, Hydrochlorothiazide, Nicotine, Quinidine, and Ranitidine is altered when administered with Memantine. 15

The Limitations of current therapy for Alzheimer’s disease are as follows:

Huperzine A:  It is an Acetyl cholinesterase inhibitor derived from the moss Huperzia serrate. It offers the following advantages:

It is approved in China for treatment of mild- to- moderate stages of AD. However, it is regulated as an herbal supplement in USA. It is combined with Donepezil. The hybrid combination is marketed as HUPRINEX. 16

Other cholinergic modulators under development are Eptastigmine which in under phase 3 of clinical development. Ganstigmine and Zanapezil are also under development. Memoquin, a drug under preclinical studies offers the added advantage of being a free radical scavenger, an inhibitor of amyloid beta aggregation, tau hyper phosphorylation inhibitor and an anti-oxidant. 17

When AD progresses, the activity of butyrylcholinesterase increases. The examples of this class of drugs are Bisnorcymserine, Phenethylcymserine and MF-8622. They are yet to undergo clinical trials and are in the pre-clinical stage of development. 17

They enhance the nAch (nicotinic Acetylcholine) receptor activity through protein kinase C pathway. Nefiracetam is a noted example. Other drugs under development are GT 521 and SB1553A. 18

The various muscarinic receptor agonists which increase the cholinergic activity are Cevimeline (AF102), Talsaclidine, and AF 267B and AF 150 S. 19

Since amyloid forms the core of the senile plaque in AD, anti-amyloid therapy aims at targeting the pathogenesis of the disease. The following table (Table 1) illustrates few anti-amyloid drugs under development along with its mechanism of action and phase of clinical trial. 21, 22

Drugs such as Indomethacin, Etanercept and propentophylline have been tried. 6, 23

For maintaining levels of ubiquitin, UCLH1 injection is under development. Phosphodiesterase -4 inhibitors such as Rolipram is currently in Phase 2. Histone deacetylase (HDAC) inhibitors such as Tubacin and Valproate may be used. 24

P- Glycoprotein is an efflux pump for a variety of endogenous & xenobiotic compounds, including Aβ amyloid. Thus, p-glycoprotein inducers such as Rifampicin, Quercetin, St. John’s wort etc. may be useful.

ACE (Angiotensin Converting Enzyme) inhibitors: ACE gene is over expressed in hippocampus, frontal cortex, caudate nucleus in patients with AD and ACE inhibitors may be beneficial.

Active immunization has been tried with AAC 001. However, the trial was halted in phase 2 due to development of meningoencephalitis. These vaccine responders (25 of 129 patients) have shown reduced cognitive decline after 4.5 years of follow up.

Passive immunization is done with Bapineuzumab (AAB 001). It is an antibody (a type of protein usually produced by white blood cell) that may help to clear β amyloid from the brain currently in phase 3. 27