INTRODUCTION: In traditional culture medicinal plants are used all over the world and they are becoming increasingly popular in modern society as natural alternatives to synthetic chemicals 1. Phyllanthus reticulatus (Family – Euphorbiaceae) commonly known as pancoli or karineli, (Synonym: Kirganelia reticulata Poir.) is a large glabrous or pubescent shrub with smooth or lanticellate branches growing from 8-10 ft in height. The plant is widely present in Tropical Africa, Srilanka, South East Asia, China, Malaysia and throughout India, mostly in hedges or waste places. Fruiting and flowering season of plant is from July to March. Leaves of the plant contain tannic acid and gum. Fruit of the plant becomes purplish black when ripe.

The leaves are used as diabetic and cooling medicine. It is reported to be used as diuretic, alternative, attenuant, astringent and as antidiarrhoel 2-5.

Plant morphology: A large, branched and scandent shrub with branches smooth or tuberculate and somewhat angled. Leaves have alternate arrangement, lanceolate, simple and variable in size. The apex of the leaves is acute, ventral side is dark green in colour while dorsal side is light-green.

It is having bitter taste and pungent odour. Leaves are 2.5-5 cm long and 0.7-1.5 cm broad, oblong and elliptic in shape. The margins of the leaves are emarginated to undulate. Flowers are axillary on slender branches. Fruits are coriaceous or fleshy and 8-16 seeded. Seeds are irregularly trigonous 6-7. Plant is shown in figure 1(a, b). 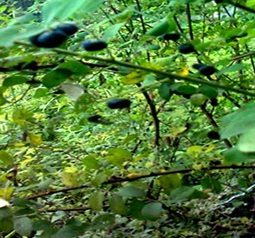 Chemical constituents: Three compounds (lupeol, lupeol acetate, and stigmasterol) were isolated and identified by phytochemical study conducted on the leaves of Phyllanthus reticulatus 8.

Scopoletin was isolated from the chloroform soluble fraction of a methanol extract. 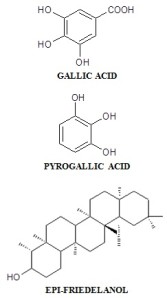 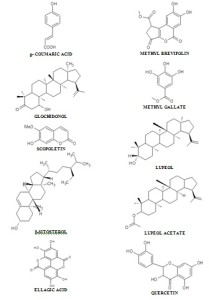 Use as natural indicator in acid base titration: The pulp of the fruit is pH sensitive and thus showed pink colour in acidic conditions and yellow color in basic conditions. The fruit extract was used as indicator in acid-base titrations. The equivalence point was matched with the equivalence point obtained by standard indicators (Methyl red, Phenolphthalein, methylorange: bromocresolgreen (0.1:0.2) 17.

Traditional use of Phyllanthus reticulatus in different countries

West Africa: Wood is used for threshing sticks and roof binders. Ashanti people use interchangeably with P. floribundus for post-partum treatment using leaves boiled with palm fruit, juice of the stem is used for sore eyes and twigs are as chew sticks.

East Africa: Fruits are used as famine food. Roots and bark are used as red to black dye. Juice is blown into eyes for soreness. Root infusion is for gonorrhea and root decoction is used as a purgative and for hookworm.

Kenya: Bark is used as dye for tanning fishing lines.

India: Dried bark and leaves decoction are as a diuretic, alterative and for cooling effect                and also used for smallpox.

Philippines: Leaves and bark infusion as a diuretic, alterative, depurative, refrigerant, and  odontalgic, applied to the abdomen for pinworms, fruit as an astringent to bowels and used against inflammations and blood diseases 18.

The aqueous extract treated animals showed decrease in atherogenic index and increased percentage of protection at both the doses, i.e. 250 and 500 mg/kg 21.

The LC50 obtained from the best-fit line slope were found to be 2.34, 3.89, and 1.99 microgram/ml for pet ether, carbon tetrachloride and chloroform respectively. In comparison with the positive contol (vincristine sulphate), the cytotoxicity exhibited by the pet ether and chloroform soluble fractions of methanolic extract was significant 23.

The rats showed promising hepatoprotective activity by significant changes of pentobarbital – induced sleeping time, changes in serum levels of sGPT, sGOT, sALP and bilirubin. Both the fractions (PR1 and PR2) were found to decrease the sleeping time elevated by CCl4 due to the decrease of liver functionality. The action was more prominent in case of PR1 fraction 24, 30.

Antibacterial activity was determined by using agar well diffusion and broth dilution methods. The extract showed minimum inhibitory concentration and minimum bactericidal concentration at concentration of 100 to 6.25 mg/ml. Extracts showed zone of inhibition ranging from 9.07-30.18mm, 8.17-24.57 mm and 5.60-14.67 mm for methanol, chloroform and hexane extract respectively. Organisms were found to be more sensitive to methanolic extract 25.

The methanol extract of Phyllanthus reticulatus leaves exhibited dose-dependent and significant anti-hyperglycemic activity in glucose-induced hyperglycemic mice. Even at the lowest dose of the extract tested (100 mg/kg body weight) serum glucose levels were lowered by 18.4%. The maximum serum glucose lowering effect was found with the dose of 400 mg extract/kg body weight (35.0%) 26.

In the acetic acid-induced writhing test, the ethyl acetate extract at doses of 150 and 300 mg/kg showed 51.23 and 65.12% inhibition of writhing, respectively. A significant elongation of tail-flick time was evident both in the ethyl acetate and the methanol extracts (42.38 and 60.49%) only at the 300 mg/kg dose level. In carrageenan-induced rat paw oedema model, the methanol extract at the 300 mg/kg dose level showed 40.03% inhibition of oedema at the end of 4 h 27.

CONCLUSION: Necessity is the mother of invention. This dictum fully applies to the rural or primitive societies, which have to discover solutions to almost all their needs and problems from the natural resources around them. In recent years ethnomedicinal studies received much attention as this brings to light the numerous little known and unknown medicinal virtues especially of plant origin. In the present article, we have reviewed the relevant literatures to congregate the botanical, ethnobotanical, phytochemical and pharmacological information on Phyllanthus reticulatus.

A survey of literature revealed that the plant is having promising pharmacological activities. The analysis of literature also pin points the fact that although the number of diseases for which Phyllanthus reticulatus finds used as medicine is fairly large yet its therapeutic efficacy has been assessed only in few cases. In view of the wide range of medicinal uses of the plant, it is imperative that more clinical and pharmacological studies should be conducted to investigate unexploited potential of this plant.

ACKNOWLEDGEMENT: We are thankful to the Institute of Pharmaceutical Sciences, Kurukshetra University, Kurukshetra, for providing all facilities during this study.