ABSTRACT: Cancer is primarily an environmental disease with 90–95% of cases attributed to environmental conditions and 5–10% due to genetics.RAS proteins act as binary molecular switches and play an important role in intracellular signal transduction which regulates processes such as actin cytoskeletal integrity, proliferation, differentiation, cell adhesion, apoptosis, and cell migration. The present bio-computational analysis was performed using web-based tools and servers. Multiple sequence alignment of selected human RAS subfamily proteins with other homologous sequences revealed highly conserved regions. The present work determined the physico-chemical properties of selected RAS proteins such as their hydrophilic nature; alpha–helical structure and close evolutionary relationship with higher vertebrates. Cancerous proteins (gi166706781, gi 4505451) from human having most of homology with the number of species. On the basis of this study we can suggest that these organisms can be taken for the further study and after the successful analysis, these can be implemented on humans.

INTRODUCTION: The Rasoncogene proteins are the founding members of this family, which is divided into five major branches on the basis of sequence and functional similarities: Ras, Rho, Rab, Ran and Arf. Small GTPases share a common biochemical mechanism and act as binary molecular switches 1.

High rates of KRAS-activating missense mutations have been detected in non–small cell lung cancer (15 to 20% of tumors) 3, colon adenomas (40%) 4, pancreatic adenocarcinomas (95%) 5, making it the single most common mutationally activated human oncoprotein. KRAS mutations were detected in the primary adenocarcinoma in 40 of 106 tumors (38%) and were significantly more common in smokers compared with non-smokers (43%) 6. Also there is a clear association between the inactivation of MGMT (O6- Methylguanine DNA methyltransferase) by promoter hypermethylation and the appearance of G to A mutations at KRAS, among 244 colorectal lesions, 88 (36%) had mutant KRAS gene 7.

In primary colorectal carcinomas, seventy-four of the 160 (46%) presented mutations in KRAS: 54% in codon 12, 42% in codon 13 (particularly G→A transition) and 4% in both 8. In some tumors, HRAS or NRAS activating mutations were identified in four (8.2%) of 49 well-differentiated carcinomas WDCs; two (6.7%) of 30 of the tumors were papillary carcinomas, two (10.5%) of 19 of them were follicular carcinomas), in 16 (55.2%) of 29 poorly differentiated carcinomas (PDCs), and in 15 (51.7%) of 29 undifferentiated carcinomas, with a significant association between RAS mutation and poorly or undifferentiated 9. In addition to mutational activation, RAS genes are amplified or over expressed in some tumors 10. Other mechanisms leading to RAS over activation in tumor cells include the deletion of genes encoding negative regulators (for example NF1, a GAP for RAS, in neurological tumors) 12-14 and over expression of positive regulators (such as SOS1, a GEF for RAS, in renal cancer cells) 15. In the present study five members of RAS subfamily: HRAS, NRAS, KRAS, RASSF2, and DIRAS1 proteins were analyzed and find out a correlation among them for finding a drug development relationship by using computational tools and severs.

Proteins by analyzing the phylogenetic trees and MSA results, one sequence each of Homo sapiens from among the several sequences of the five RAS proteins were selected. The selection was done on the basis of maximum similarity found, so that the sequence was a representative of all the other sequences.

Secondary structure has been predicted using SOPMA 19 and PHYRE2 20 software where the FASTA format of the sequence was given as input. It provides the structural information of the protein sequence in form of coils, helices and strands with template information.

3-D structure prediction was done by using two online tools SWISS-MODEL 21 and PHYRE2. The modeling involves four basic steps, first searching structure showing homology with target, then selecting a best template having maximum identity with the target sequence which follows its alignment with the target and modeling the structure. The modelled structure was then evaluated using Chimera 1.9 22 visualization provided 3D structure of selected PDB ids.

Ramachandran plot of the selected sequences were made for validation using SAVES server (http://services.mbi.ucla.edu/SAVES/) here Procheck 23 implemented for the plot formation. The functional domains were then searched using SMART 24 tool. The functional Motifs were then analyzed using MOTIF search (http://www.genome.jp/tools/motif/MOTIF2.html).

KRAS: We have constructed the phylogeny tree taking all the 174 sequences of KRAS available on NCBI database (Fig. 1). The Homo sapiens sequence (gi166706781) shares clad with 76 other sequences. Also, the sequences Musmusculus (gi 569017220), Musmusculus (gi 569017218), Musmusculus (gi 111601545) and Rattusnorvegicus (gi 564349722) share a different clad. Out of the 174 sequences 172 sequences belong to class Coelomata, one sequence Clonorchissinensis (gi358331595) belong to class Pseudocoelomata and one another sequence Necatoramericanus (gi568268505)belong to class Acoelomata. All other Homo sapiens sequences show less homology as compared to this sequence. So after comparing the results of MSA and Phylogenetic tree we have chosen this sequence (gi166706781) for further study.

Phylogenetic tree constructed 140 sequences of NRAS available on NCBI database (Fig. 2). The Homo sapiens sequence (gi 4505451) shares clad with 140 other sequences. Out of the 140 sequences, 138 belong to Fungi Metazoa group and other two sequences Acanthamoebacastellanii (gi440791055), Acanthamoebacastellanii (gi470387771) belong to Acanthamoebidae. Another Homo sapiens sequences show less homology as compared to this sequence. So after comparing the results of MSA and Phylogenetic tree we have chosen sequence (gi 4505451) for further study.

HRAS: We have constructed the phylogeny tree taking all the 90 sequences of HRAS proteins were used for phylogenetic formation (Fig. 3). The Homo sapiens sequence (gi 49457536) shares clad with 90 other sequences. All other Homo sapiens sequences show less homology as compared to this sequence. So after comparing the results of MSA and Phylogenetic tree we have chosen sequence (gi 49457536) for further study.

31 retrieved sequences of DIRAS1 were used for tree formation (Fig. 5). The Homo sapiens sequence (gi 21553323) shares clad with 31 other sequences. Out of the 31 sequences, 29 belong to class Sarcopterygii and two other sequences Daniorerio (gi41054159), Daniorerio (gi 28278625) belong to class Actinopterygii. Another Homo sapiens sequences show less homology as compared to this sequence. So after comparing the results of MSA and Phylogenetic tree we have chosen sequence (gi 21553323) for further study.

Selected Human RAS subfamily proteins: KRAS, NRAS, HRAS, RASSF2 and DIRAS1, consisted of 189, 189, 189, 326, and 198 amino acids respectively. Primary structure analysis provided the physicochemical properties of RAS subfamily proteins. Molecular weight of KRAS, NRAS, HRAS, RASSF2, and DIRAS1 was 21655.8, 21229.1, 21298.1, 37790.2 and 22328.7 respectively. Most abundant amino acid was Valine in HRAS, NRAS, DIRAS1 (8.5%, 9.0%, and 9.1% respectively), Leucine (10.1%) in RASSF2 and Valine and Lysine in KRAS (8.5%). A protein whose instability index is smaller than 40 is predicted as stable, a value above 40 predicts that the protein may be unstable. Prot Param server predicted that HRAS, RASSF2, and DIRAS1 were unstable whereas NRAS and KRAS were stable proteins. The isoelectric point of a protein is an important property, because it is at this point that the protein is least soluble. Computed isoelectric point of KRAS, NRAS, and HRAS was 6.33, 5.01, and 5.03 respectively i.e. below 7 so they are likely to precipitate in acidic buffers, and for RASSF2 and DIRAS1 it was 8.93, and 8.94 respectively, so they are soluble in basic buffers. The aliphatic index of a protein is defined as the relative volume occupied by aliphatic side chains: alanine, valine, isoleucine, and leucine, which is 85.03, 82.96, 81.96, 82.76 and 81.62 for KRAS, NRAS, HRAS, RASSF2 and DIRAS1 respectively. It may be regarded as a positive factor for the increase of thermo-stability of globular proteins. The Grand Average Hydropathy (GRAVY values) showed that all proteins were hydrophilic, ranging from -0.432 to -0.317, supports the soluble nature of RAS proteins. 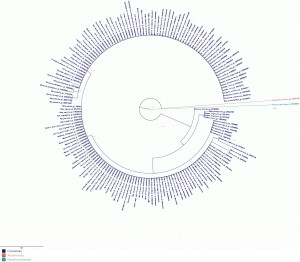 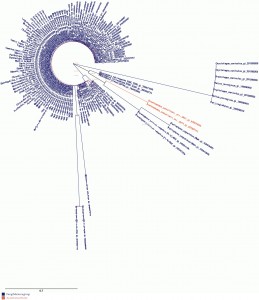 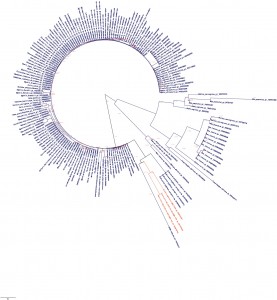 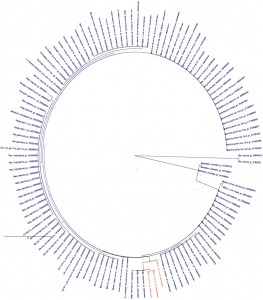 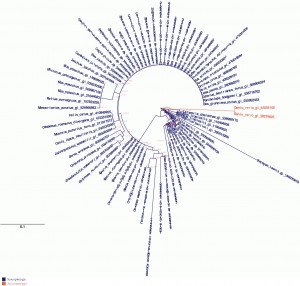 The functional domains of these proteins were analyzed using SMART tool. The results were shown in the Table 1.

The functional motifs of these proteins were analyzed using MOTIF-Search tool (Table 2).

SWISS-MODEL out of several templates, the one with highest percentage of residues in the favored regions (98.2%) was used to predict the 3D structure. Models show the structure of proteins. The description of the colors is as follows-

CONCLUSION: In the present study, RAS protein sequences were taken from NCBI and result shows the cancerous proteins (gi166706781, gi 4505451) having most of homology with the number of species. On the basis of our study we can suggest that for cancer development and treatment, we can choose these organisms for the further study and after the successful result, these can be implemented on humans. This analysis revealed the importance of computational approaches for drug designing and discovery. This study proposes to put forward a constructive conception to designing RAS protein inhibitors.