ABSTRACT: An attempt has been made in the present study to isolate and identify actinomycetes, which can produce bioactive metabolites possessing antimicrobial activity. The soil samples were collected from mangrove sediments of Krishna district, Andhra Pradesh. The potent secondary metabolite producing strains were isolated and designated as VLK-15, VLK-24, and VLK-56. Identification of the strains was carried out basing on morphological, cultural, physiological and biochemical characters. Phylogenetic analysis of 16S rRNA gene sequence showed that the strains VLK-15, VLK-24, VLK-56 form distinct clade within the genus Streptomyces. The 16S rRNA sequences were deposited in the GenBank database of NCBI under the accession numbers MG309759 (Streptomyces olivoverticillatus VLK-15), MG309760 (Strepto-myces rubrus VLK-24), and MF952650 (Streptomyces sampsonii-VLK-56). The antimicrobial activity of the strains was evaluated by using agar well diffusion assay. The ethyl acetate extracts were highly effective against Candida albicans, Staphylococcus aureus, Bacillus megaterium followed by Bacillus subtilis, Escherichia coli and Klebsiella pneumoniae.

INTRODUCTION: Actinomycetes are sapro-phytic, free-living, Gram-positive bacteria widely distributed in different habitats, frequently filamentous and sporulating with DNA rich in G+C (55-75%). They are the potential source for many bioactive secondary metabolites 1. The hunt for new antimicrobial agents is very useful to prevent infectious diseases 2. They have been used in areas of medicine as well as in water sanitation to inhibit the growth of microorganisms in drinking water 3.

Mangrove ecosystems are the unique woody plant communities in the tropical and subtropical coastal regions 4. They are viewed as the ecosystems that comprise unexplored microbial diversity, including actinomycetes 5. The mangrove ecosystems exist between terrestrial and marine environments that support a rich and diverse group of microorganisms 6. There may be no other group of plants with such highly developed morphological, biological, ecological, and physiological adaptations to extreme conditions.

Mangrove derived actinomycetes remain as an unexploited and luxuriant source of pharmaceutical thrust. The expedition for the microbial groups with therapeutic possessions continues to receive great attention as researchers investigate mangrove microbes for novel molecules with antimicrobial, antitumor, and biochemical activities 7.

Uncaged mangrove habitats provide more chances for isolating new species of streptomyces with unique chemical structures preventing many microbial diseases and cancers 8. Hence, the present work was designed to study the diversity and polyphasic taxonomy of actinobacterial population of the mangrove ecosystems of the Krishna district of Andhra Pradesh, India.

Isolation of Actinomycetes: The air-dried and pretreated soil samples were suspended in sterile distilled water (1g in 100 ml), homogenized by vortexing, and 0.1ml of serially diluted sample (10-3 dilution) was spread over the surface of selective culture medium (starch-casein agar) containing 3% NaCl supplemented with tetracycline and secnidazole 9. After incubation for one week at 30 °C, distinct strains were selected for subculturing to maintain pure culture on agar slants.

Extraction of Secondary Metabolites: Modified yeast extract, malt extract, and dextrose broth was used as a production medium for the extraction of crude secondary metabolites. All the actinobacterial isolates were inoculated separately and incubated at 30 °C in a rotatory shaker (120 rpm) for primary screening. The crude culture filtrate obtained from a five-day-old culture was extracted with equal volumes of ethyl acetate to extract the antimicrobial compounds. The solvent extracts were evaporated to dryness in a water bath at 40 °C, and the compound obtained was tested for its activity against the test microorganisms by agar well diffusion method 10.

Identification: Micro-morphological, biochemical and physiological characteristics together with molecular (16S rRNA gene sequencing) analysis were carried out to identify the strains.

Molecular Identification: The Molecular identi-fication of the potential strains was carried out by amplifying the bacterial genome. DNA samples were extracted using an Insta Genetm Matrix (BIO-RAD.). The primers 27F 5' (AGA GTT TGA TCM TGG CTC AG) 3,' and 1492R 5' (TAC GGY TAC CTT GTT ACG ACT T) 3' were used for the PCR. The PCR reaction was performed with 20 ng of genomic DNA as the template in a 30 µL reaction mixture using EF-Taq (SolGent, Korea) as follows: activation of Taq polymerase at 95 °C for 2 min, 35 cycles at 95 °C for one minute, 55 °C and 72 °C for one minute each were performed, finishing with a 10-min step at 72 °C.

Phylogenetic Analysis: The 16S rRNA sequence was compared with the known sequences in Gene Bank using the Basic Local Alignment Search Tool (BLAST) against the gene library available in the NCBI and the GenBank. The phylogenetic tree was constructed using the Maximum Parsimony method. The closely related homologous strains were identified, retrieved, and compared to the sequence of the isolated strains using CLUSTAL W available with the MEGA-X Version 11.

Gene Bank Accession Number: The 16S rRNA gene sequence of the strains are deposited in the National Center for Biotechnology Information (NCBI).

RESULTS AND DISCUSSION: The air-dried soil samples were pretreated with calcium carbonate 12. The serial dilution plate technique was used for the isolation of actinobacteria. After incubation for a week at 30 °C, distinct colonies were selected based on smooth, granular, powdery appearance 9. A total of 60 actinobacterial strains were isolated and designated as VLK-1 to VLK-60 from the mangrove ecosystem of coastal regions of the Krishna district. Some reports indicate the isolation of rare actinobacterial strains from Krishna mangrove ecosystems 14, 15. The strains designated as VLK-15, VLK-24, and VLK-56 exhibited typical morphological characteristics of the genus Streptomyces 16. The morphological, physiological, and biochemical characteristics of the strains are presented in Table 1. 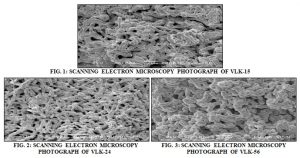 The strains exhibited good growth on ISP-1, ISP-2, ISP-7, starch casein agar, Czapek-Dox agar, and maltose tryptone agar. The growth was moderate on ISP-4 and ISP-5 and nutrient agar media, while it was poor on ISP-3 agar. The color of aerial mycelium varied from white to brown, while the substrate mycelium varied from brown to dark brown. Production of melanin pigment was not found by the strains on ISP-7 medium.

Micromorphology of the strains was observed by the coverslip culture method. The cultures showed extensively branched aerial mycelium with a long chain of spores. The strains may be placed in the rectus-flexibilis group of Streptomyces 17, 18. Spore characters of the strains were recorded with a Scanning Electron Microscope (SEM) Fig. 1-3.

TABLE 2: UTILIZATION OF CARBON SOURCES BY THE STRAINS

The partial gene sequence of 16S rRNA of the strains was blasted against the nucleotide database of the NCBI. The library search reported matching strains, and the sequences were aligned with the set of published sequences on the basis of by nucleotide BLAST similarity search analysis. 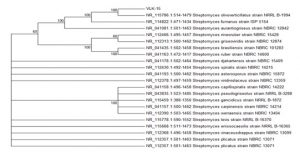 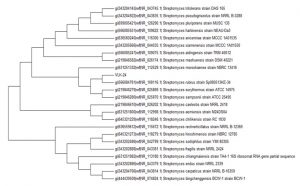 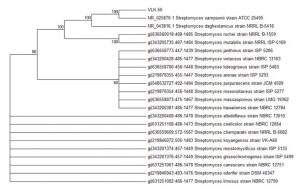 Based on 16S rRNA gene sequences of the strains showed a close relation with Streptomyces sp. Fig. 4-6. The 16S rRNA sequences are deposited in the GenBank database of NCBI with the accession numbers MG309759 (Streptomyces olivoverticillatus VLK-15), MG309760 (Streptomyces rubrus VLK-24), and MF952650 (Streptomyces sampsonii-VLK-56).

FIG. 7: ANTIMICROBIAL ACTIVITY OF ETHYL ACETATE EXTRACTS OF STRAINS AGAINST THE TEST ORGANISMS

ACKNOWLEDGEMENT: This work is supported by the DST-SERB, Young Scientist Startup Programme. The authors thank the authorities of the Department of Botany and Microbiology, Acharya Nagarjuna University, for providing facilities to carry out this study.

CONFLICTS OF INTEREST: The authors declare that there is no conflict of interest regarding this paper's publication.