ABSTRACT: Efavirenz (EFA) solid binary systems were prepared with β-CD by co-grinding and microwave irradiation methods. Detection of inclusion complexation was done in solution state by means of phase solubility analysis and in solid state by FTIR, DSC and in-vitro Dissolution studies. Apparent stability constant revealed EFA with β-CD at 1:1 M produces stiochometric complex with AL type phase solubility profile. A true inclusion of EFA with β-CD at 1:2 M in solid state was confirmed by FTIR and DSC. Dissolution properties of EFA- β-CD binary systems were superior when compared to physical mixture and pure drug. Overall the rank order of improvement in dissolution properties of Efavirenz with ratios is 1:2M > 1:1M and methods MW > CG > PM > pure drug. One way ANOVA suggest the DP60 and DE60 values were significantly higher (P<0.01) in solid binary systems prepared by microwave irradiation method when compared to co-grinding and its corresponding physical mixtures and pure drug.

INTRODUCTION: In recent years due to application of combinational chemistry and high-throughput screening during drug discovery, a majority of new drug candidates exhibits poor aqueous solubility, which makes compounds to be very challenging for formulation scientists in developing bioavailable dosage forms. An important tool in this regard is the use of cyclo-dextrins (CDs), especially chemically modified cyclodextrins. CDs are cyclic (α-1, 4)-linked oligosaccharides of α-D-glucopyranose, containing a relatively hydrophobic central cavity and hydrophilic outer surface as shown in Fig. 1.

These starch derivatives interact via dynamic complex formation and other mechanisms in a way that camouflages undesirable physicochemical properties, including low aqueous solubility, poor dissolution rate and limited drug stability. Through these effects cyclodextrins and their derivatives have became popular modalities for increasing oral bioavailability and absorption rate 1, 2.

The improvement in hydrophilcity is obtained through the formation of inclusion complexes where the host/guest interaction is dependent on the dimension of the oligosaccharide ring, and/or by means of highly homogeneous assembly between the CDs and the drug in the solid state. In most cases these associations provide amenable solution behaviour of poorly soluble drugs 3. CDs improve the apparent drug solubility and / or dissolution of poorly water soluble drugs through inclusion complexes with their polar molecules or functional groups. 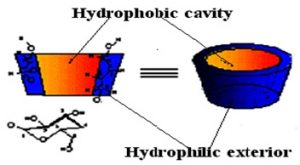 FIG. 1: THE CHEMICAL STRUCTURE AND 3D STRUCTURE OF CYCLODEXTRIN

Efavirenz, chemically 2H-3, l-benzoxazin-2-one, 6-chloro - 4- (cyclopropylethnyl) -l, 4-dihydro-4-(tri-fluoromethyl)-(4S) is a non-nucleoside reverse transcriptase inhibitor with activity against HIV Fig. 2. It has no inhibitory effect on HIV-2 RT or human cellular DNA polymerases alpha, beta, gamma, or delta. Efavirenz binds directly to RT and inhibits viral RNA and DNA-dependent DNA polymerase activities by disrupting the catalytic site. Although the drug RT template complex may continue to bind deoxynucleoside triphosphate and to catalyze its incorporation into the newly forming viral DNA, it does so at a slower rate 11. 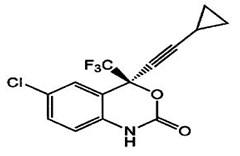 Efavirenz is practically insoluble in water having lowest solubility of about 0.01 mg/ml 12. Efavirenz pKa value is 10.2, cLogP value is 4.666 and logP value is 3.68 13. This drug has been classified as class II drugs of BCS systems i.e. high permeability and low solubility 14, 15. The poor aqueous solubility and wettability of EFA gives rise to difficulties in pharmaceutical formulations for oral delivery, which may lead to variable bio-availability. To over come these drawbacks, increasing the aqueous solubility of EFA are an important goal. Hence, in this investigation, solid binary systems of EFA were tried with β-CD with the aim to improve its solubility and dissolution properties.

Materials: Efavirenz (EFA) was a gift sample from Strides Pharma Ltd., Bangalore, India. β-cyclodextrin (βCD) was obtained from Glenmark Pharma Ltd., Nasik, India.  All other reagents and solvents used were of analytical grade.

Preparation of Solid Binary Systems: The following binary systems of EFA and β-CD were prepared at 1:1 and 1:2 molar ratios.

Physical Mixtures: The physical mixtures of EFA and β-CD in 1:1 and 1:2 M were obtained by mixing individual components that had previously been sieved (75-150 µm) together with a spatula.

Co-grinded Systems: Efavirenz was triturated with β-CD in a glass mortar, the resulting grinded powder was passed through sieve no 80.

Microwave Irradiated Systems: The aqueous solution of cyclodextrin was added slowly into a solution of EFA dissolved in methanol with constant stirring. The mixture was subjected for irradiation in microwave oven for 90 sec at 60 ºC, after reaction completes add adequate amount of methanol to remove the residual β-CD. The resulting mixture was stirred for 1h and evaporated under vacuum until dry. The resulting powder was pulverized and passed through sieve no 80.

Phase Solubility Studies: Excess amounts of Efavirenz (50 mg) were added to 25 ml β-CD solutions (ranging in concentration from 0.5 to 4×10-4M) prepared in 1.5% w/v sodium lauryl sulphate solution in a series of 25 ml stoppered conical flasks. The mixtures were shaken for 48 h at room temperature (28 ºC) on a rotary flask shaker. After 48 h of shaking to achieve equilibrium, 2 ml aliquots were withdrawn at 12 h intervals and filtered immediately using a 0.45 μm nylon disc filter. The filtered samples were diluted and assayed for Efavirenz by measuring absorbance at 247 nm. Shaking was continued until three consecutive estimations were the same. The solubility experiments were conducted in triplicate. The blanks were performed in the same concentrations of β-CD in 1.5% w/v sodium lauryl sulphate in order to cancel any absorbance that may be exhibited by the CD molecules. The apparent stability constants were calculated from the solubility diagrams.

FTIR Studies: Fourier transform IR spectra were recorded on a Shimadzu FTIR-281-spectro-photometer.The spectra were recorded for Efavirenz, β-CD and solid binary systems. Samples were prepared in KBr disks prepared with a hydrostatic press at a force of 5.2T cm-2 for 3 min. The scanning range was 450-4000 cm-1 and the resolution was 1 cm-1.

Differential Scanning Calorimetry: Thermo-grams of Efavirenz, β-CD and solid binary systems were recorded on a Sieko, DSC 22 ºC model differential scanning calorimeter (Tokyo, Japan). About 10 mg of samples were sealed in aluminium pans and heated at a rate of 10 ºC/min from 30 ºC-300 ºC.

Dissolution Studies: In-vitro dissolution studies of Efavirenz, physical mixture and solid binary systems prepared were carried out in 900 ml of 1.5% w/v sodium lauryl sulfate (SLS) solution using a USPXXI type 2-dissolution rate test apparatus by powder dispersed amount method (powder samples were spread over the dissolution medium). Sample equivalent to 100 mg of Efavirenz, speed of 75 rpm and a temperature of 37ºC were used in each test.

A 5 ml aliquot was withdrawn at different time intervals, filtered using a 0.45 µm nylon disc filter and replaced with 5 ml of fresh dissolution medium. The filtered samples were suitably diluted, if necessary and assayed for Efavirenz by measuring the absorbance at 247 nm. The dissolution experiments were conducted in triplicate. The results were computed by using dissolution software PCP DISSO V3.0.

Phase Solubility Studies: The solubility of Efavirenz increases linearly with an increase in the concentration of CDs giving AL type solubility diagrams Fig. 3. The increase in solubility in the systems is due to one or more molecular interactions between Efavirenz and CD form distinct species or complexes. The cavity size of β-CD seems to be optimal for entrapment of Efavirenz molecule and consequently provides the greatest solubilisation effect. The apparent stability constants (K1:1) were calculated from phase solubility diagrams by using following equation 16. 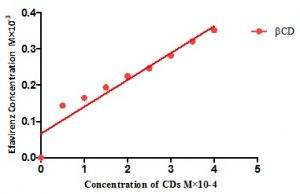 In the spectra of microwave irradiated complex this band was broader and was shifted towards lower wave number at 1747-1768 cm-1. On the other hand the C=O stretching band of Efavirenz in microwave irradiated complex shifted to higher frequency, shifting is from 1747 cm-1 (Efavirenz) to 1768-1789 cm-1. These results indicate the formation of inclusion complex suggesting the formation of hydrogen bonds between the carbonyl groups of Efavirenz and the hydroxyl groups of the host cavities during complexation processes. FTIR spectrum β-CD is characterized by intense bands at 3300 to 3500 cm-1 associated with the absorption of the hydrogen bonded OH groups of β-CD. The vibration of the aryl-CH and CH2 groups appear in the 2800 to 3000 cm-1 region. The observed changes in the FTIR spectra of the solid binary systems may be explained by the different preparation methods. From the FTIR spectra the patterns of the physical mixtures correspond to superimposing of FTIR spectra of the two components. 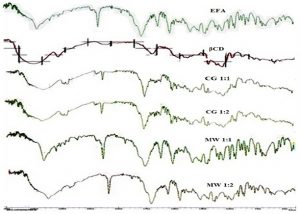 However, in the co-grinded and microwave irradiated methods near smoothening of the band situated at 3200 to 3700 cm-1 was observed. Moreover the vibrations of Efavirenz are shifted towards higher frequencies, suggesting the breakage of existing bonds as a result of inclusion complex formation with reduced intensities. Spectral changes always concern C-OH, -CH2 and CH groups of the β-CD suggesting, the host-guest interactions being dominated by hydrogen bonds among the above mentioned groups. Analysis of FTIR spectra of the inclusion complexes and physical mixtures of the components revealed the most frequent changes to be in the range of 2950 to 3050 cm-1, which were interpreted as the valency bonds of the C-H in plane vibrations of the aromatic range. Differences were also found in the 1480 to 1600 cm-1 regions, attributed to the C=C bonds in the aromatic range. The intensity and shape of these bonds changed dramatically for the inclusion complexes as compared to those of pure Efavirenz and the physical mixture. These indicate the vibrating and bending of the Efavirenz molecule were restricted, due to the formation of an inclusion complex. These suggest the aromatic rings in Efavirenz being inserted into the cavity of cyclodextrin.

DSC Studies: The DSC curves of the Efavirenz and β-CD compared with its solid binary systems prepared by all methods confirm not only an interaction between the drugs and β-CD but also a real inclusion. DSC thermograms of Efavirenz and its solid binary systems were shown in Fig. 5. The DSC thermogram of Efavirenz exhibited an endothermic peak at 136.87 ºC corresponding to its melting point and DSC thermogram of β-CD showed broad endothermal peak at 96.99. Lowering of the endothemic peaks in cyclodextrin is mainly due to their dehydration process during analysis and a small peak observed at 218.96 and 220.91ºC for β-CD corresponds to its melting point indicating, major portion of β-CD undergoes dehydration during analysis. The DSC curves of Efavirenz were compared with the inclusion complexes of EFA- β-CD prepared by co-grinded and microwave irradiated methods. DSC curves indicate progressive reduction in Efavirenz endothermal peak intensity in EFA-β-CD inclusion complexes at 1:1M and 1:2M ratios prepared by co-grinding and 1:1M microwave irradiation method. These point to partial interaction between Efavirenz and β-CD, but in case of EFA-β-CD 1:2M microwave irradiated inclusion complex more reduction in Efavirenz endothermal peak indicates strong interaction between Efavirenz and β-CD. 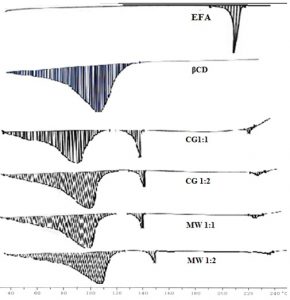 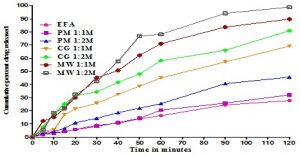 The dissolution data obtained were subjected to model fitting and the model which fits the observed dissolution data was evaluated by correlation coefficient (r) between the variables involved. The calculated `r’ values in various models for all complexes are summarized in Table 3.

Since, the CDs dissolve more rapidly in the dissolution medium than the drug alone, it can be assumed that, in early stages of the dissolution process, the CD molecule will operate locally on the hydrodynamic layer surrounding the particles of the drug.