ABSTRACT:Rutin belongs to a class of plant secondary metabolites called flavonoids.  Rutin is believed to be a vital nourishing supplement as it is able to make the capillaries stronger. But when administered orally it shows poor absorption because of less lipophilicity. To overcome this limitation, the present study was aimed to develop Rutin- phospholipid complex in different ratio to improve the lipophilic properties of rutin. The prepared complex was evaluated for physicochemical properties and in-vitro DPPH radical’s scavenging activity. The physicochemical properties of the complex were analyzed by ultraviolet-visible spectroscopy (UV), infrared spectroscopy (IR) and X-ray diffractometry (XRD). The results showed that rutin-phospholipid in the complex were joined and did not form a new compound. Results of DPPH radical are scavenging activity revealed that among all ratios of complex, 1:3 next to this 1:2 followed by 1:1. The study was concluded that the free radical scavenging activity was observed in concentration dependent manner.

INTRODUCTION: Rutin (3, 3′, 4′, 5, 7-pentahydro-xyflavone-3-rhamnoglucoside) 1 is a flavanol glycoside (figure 1) plant metabolite extracted from buckwheat and Japanese pagoda tree and is able to antagonize the increase of capillary fragility associated with hemorrhagic disease or hypertension 2. 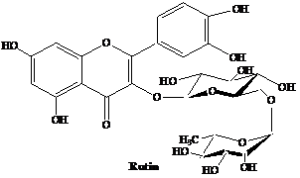 Rutin is an oral capillary preservatory drug usually used for the therapy of chronic venous insufficiency and is also an ingredient in a large number of multivitamin preparations and herbal remedies 4.

The interest in using rutin in cosmetic and pharmaceutical formulations is to enhance their antioxidant and vasoprotective properties, promoting relief of the symptoms of lymphatic and venous insufficiency, and reducing capillary fragility.

It is worth considering that, being a non-toxic, nonoxidizable molecule, rutin offers an advantage over other flavonoids, which on some occasions behave as pro-oxidant agents and catalyse oxygen radical’s production.

In previous studies, it has been mentioned that rutin posses lower lipophilicity which somewhat reduces its formulation development acceptance. Therefore, in this study, an attempt was taken to enhance the lipophilicity of rutin by preparing its complexes with phospholipid and comparatively evaluate the physicochemical and free radical scavenging property with rutin.

Characterization: The prepared rutin-phospholipid complex (1:1, 1:2 and 1:3) was subjected to structural analysis by UV spectroscopy, IR spectroscopy, and X-ray diffraction pattern. 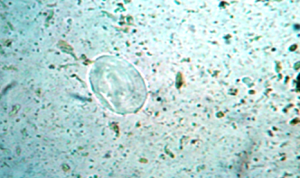 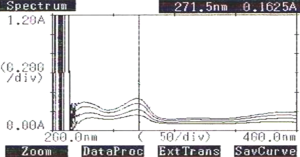 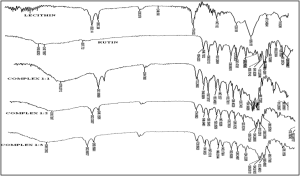 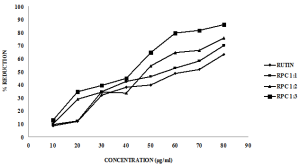 CONCLUSION: Rutin is a potent antioxidant found in many plants and vegetables. We tried to enhance the free radical scavenging property of this molecule through rutin-phospholipid complexes. The complexes were tested for its physicochemical properties and in-vitro antioxidant activity. The results obtained, proved better efficiency in the form of complexes as compared to the molecules itself.