ABSTRACT: Pterocarpus marsupium Roxb. (Fabaceae) is a moderate to large deciduous tree, belonging to family Fabaceae. It is considered as an extremely useful source of unique natural products for development of medicines against various diseases and for industrial product development. The present study includes physicochemical parameters like ash value, extractive value, fluorescence analysis, moisture content and preliminary phytochemical screening along with mineral analysis. Antimicrobial activity was also assessed for this plant. The physicochemical constants obtained were within normal levels prescribed by standards. The phytochemical studies revealed the presence of primary and secondary metabolites in various solvent extracts of Pterocarpus marsupium bark. The estimated mineral composition was in good amounts which would serve as a device for deciding dosage of ayurvedic drug prepared from the plant. Antimicrobial activity by disc diffusion method indicated the zone of inhibition which ranges from 11-22mm for different extracts. Further evaluation of test samples for minimum inhibitory concentration (MIC) using micro dilution method showed that the methanol extract had exhibited significant activity by inhibiting S.typhi, E.faecalis at 12.5μg/ml and A.niger at 25μg/ml. The present paper will provide the data which is helpful in correct identification, standardization of this medicinal plant prior to carrying out further pharmacological evaluation and also help in preventing its adulteration.

INTRODUCTION: Herbal traditional medicines have obtained appreciable amount of momentum worldwide during the past decade and play a paramount role in health management programs especially in developing countries 1. It is estimated that world’s quadrant population i.e, 1.42 billion people are dependent on folk medicines for the treatment of various ailments 2.

However, a key obstacle, which has hindered the acceptance of the alternative medicines in the developed countries, is the scarcity of documentation, stringent quality assessment and control. There is an internationally increasing demand for documentation of research work accomplished on traditional medicines. With this backdrop, it becomes extremely important to make an attempt towards standardization of the plant material to be used as traditional medicine for proper marketing authorization and approval 3. The process of standardization can be achieved by stepwise pharmacognostic and phytochemical studies. Antibiotic resistance has also become a serious and widespread problem in developing countries, causing high mortality each year 4.

These disadvantages undermine the therapeutic utility of the currently available antibacterial drugs and thus necessitating the need for using alternative therapeutic agents from plants origin that are effective against antibiotic resistant bacteria, safe and low cost 5. Medicinal plants are known to produce certain bioactive molecules which react with other organisms in the environment, inhibiting bacterial or fungal growth 6. Different chemical compounds isolated from the bark exhibit wide pharmacological activities and plays a role in treating the various disorders related to human health.

Pterocarpus marsupium Roxb. is commonly called Red Kino Tree (English), Bijasal (Hindi) and Raktahonne (Kannada). It is native to India, Nepal and Sri Lanka, where it exists in parts of the Western Ghats. Traditionally, the plant material has been used as a cooling external application for headache, inflammations, as antipyretic, anti-helminthic, aphrodisiac, mental aberrations and ulcers. The bark is used for the treatment of stomachache, cholera, dysentery, urinary complaints, tongue diseases and toothache 7. The heartwood and bark of Pterocarpus marsupium are known for their anti-diabetic activity 8.

A variety of flavonoids and their derivatives have been isolated from different parts of the plant. It also showed its antimicrobial activity against Pseudomonas aeruginosa, Staphylococcus aureus and Klebsiella pneumonia 9. The literature survey revealed that systemic evaluation of this plant is still lacking. Therefore, the present research work was aimed to evaluate the physicochemical, phytochemical analysis and antimicrobial activity of the Pterocarpus marsupium Roxb. bark.

Procurement and Identification of Bark material: About 5kg of Pterocarpus marsupium bark was collected from village Shadipur, Chincholi in Kalaburagi district, Karnataka, India during the month of June 2015. It was identified by the Department of Botany, Gulbarga University, Kalaburagi.

Preparation of plant extract: Freshly collected bark of Pterocarpus marsupium Roxb. was washed thoroughly under running tap water and later through distilled water, shade dried and then powdered to required particle size. The air dried bark powder (100g) were successively extracted by Hot Soxhlet extraction with solvents of increasing polarity i.e., petroleum ether, chloroform, methanol and distilled water(aqueous).The extracts were dehydrated and preserved in a sterile container for further use.

Physicochemical analysis: The finely powdered bark of Pterocarpus marsupium Roxb. was subjected to various physicochemical parameters such as determination of ash value like total ash, acid insoluble ash and water soluble ash, Extractive values like petroleum ether, chloroform, methanol and water soluble, Loss on drying (Moisture content) as per the WHO guidelines on quality control methods for medicinal plant materials and according to the standard methods prescribed in Indian Pharmacopeia 10, 11. Fluorescence investigation was executed according to the method of Kokoski 12, 13.

Disc Diffusion Method: The agar well diffusion method was followed to test different extracts of Pterocarpus marsupium bark for antimicrobial activity 17, 18 .The bacterial isolates were grown in nutrient broth for 18 hour and standardized to 0.5 McFarland standards (106 CFU/ml). The fungal isolates grown on Potato dextrose agar (PDA) at 25°C until they are sporulated. The fungal spores were harvested and standardized to 0.1 OD at 600nm. The nutrient agar and potato dextrose agar plates were prepared by pouring 20ml of molten media into sterile petriplates. 0.1% inoculum suspension was swabbed uniformly and the inoculum was allowed to dry for 5 minutes. Wells were punched using a sterile 6mm cork borer.100μl of the crude extract (100 mg/ml) was added into the wells, incubated at 37°C, 24hrs for bacteria and 25˚C, 48hrs for fungi. The effects were compared with standard chemotherapeutic agent Cefixime (30mcg, Hi-Media), Piperacillin(30mcg) and Amphotericin B(20mcg) for the gram positive, gram negative bacterial and fungal assays respectively. Dimethyl sulfoxide (DMSO) was used as negative control. Antimicrobial activity was assayed by measuring the diameter of the zone of inhibition formed around the well using standard (Hi-Media) scale. The experiment done in triplicate and the average values were calculated for antibacterial activity.

Minimum Inhibitory Concentration (MIC) Assay: The minimum inhibitory concentrations (MIC) of different extracts were determined by the broth dilution method 19. In this method, 2ml of nutrient broth and subsequently varying concentrations (100, 50, 25, 12.5, 6.25mgmlˉ¹) of plant extracts was added in different test tubes. Standardized inoculums (0.1 ml, 106cfu/ml) of bacterial and fungal suspensions were added to each test tube and incubated at 370C, 12h for bacteria and 250C, 24h for fungi. The test tube with the concentration of plant extract at which no detectable growth was observed is considered as the MIC.

Physicochemical analysis: The nature and colour of petroleum ether extract was found to be oily, greasy yellow, methanol extract to be semi-solid red wine where as chloroform and aqueous extract appeared as solid brown.

The extractive values are valuable to estimate the chemical constituents present in the crude drug and furthermore aid in evaluation of definite constituents soluble in a particular solvent 20. The results of physicochemical analyses were identified within the acceptable limit which in turn ascertains the quality as well as purity of drug. The moisture content was determined by loss on drying and was found to be 7.2%. The less value of moisture content of drugs could prevent bacterial, fungal or yeast growth through storage 21.

Fluorescence analysis: Fluorescence is the phenomenon exhibited by various chemical components present in the plant material. In the present study, the fluorescence analysis of Pterocarpus marsupium bark powder was analyzed under visible light and UV light when treated with different chemicals and solvents.

The exposure of the powder to visible and UV light revealed the development of respective colours as presented in Table 2. Fluorescence analysis of powder gives a clue if powder is in adulteration, thus can be used as a diagnostic device for analyzing the adulteration. Presence or absence of certain important compounds in an extract is determined by color reactions of the compounds with precise chemicals which act as dyes. This method is prerequisite before going for detailed phytochemical investigation 22.

Phytochemical screening: Carbohydrates, proteins, amino acids, lipids and fats were present in petroleum ether and chloroform extracts whereas, methanol extract has showed positive response for all the metabolites except saponins. Aqueous extract was found to contain carbohydrates, proteins, steroids, saponins, alkaloids and tannins as summarized in Table 3. Phytochemical analysis is useful in detecting the source of pharmacologically active chemical constituents. The plant contains isoflavon glycosides, fixed oil, saponin, tannin, flavonoids, alkaloids, mucilage, resin and polyphenol compounds in various parts of it 23. The phytocomponents procured in this study also correlates with the above report.

Mineral analysis: The AAS elemental analysis of the plant was presented in the Table 4. The mineral values were reported as parts per million(ppm).The estimated mineral composition were found in good amounts which would serve as a device for deciding dosage of Ayurvedic drug prepared from the plant. Mineral elements possess a very important role in human nutrition. Though they are required in minute quantities they are essential for proper functioning of the entire human system. This can further be investigated in a wide scale for the purpose of drug development against various deficiencies 24.

Antimicrobial activity: Among the four solvent extracts, maximum inhibition was observed in methanol extract (14-22mm) followed by aqueous (13-19mm), petroleum ether (11-17) and chloroform extracts (13-16mm) as shown in Fig. 1. The results were compared with standard Cefixime (14-28mm), Piperacillin (21mm) for gram positive, gram negative bacteria respectively and Amphotercin B (25–28mm) for fungi. 10% DMSO was used as negative control which showed no inhibitory effect against the tested organisms. The results of MIC assay as shown in the Table 5, explains that the methanol extract of Pterocarpus marsupium bark has shown significant antibacterial activity for S.typhimurium at 12.5µg/ml and antifungal activity for Aspergillus niger at 25µg/ml. 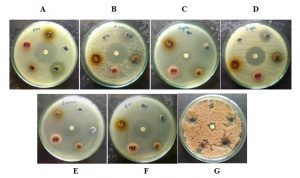 On the basis of zone of inhibition and MIC values, Salmonella typhimurium was more sensitive to the methanol extract than all other organisms with inhibition zone of 19mm and MIC value of 12.5µg/ml respectively.

TABLE 5: MIC OF BARK EXTRACTS ON BACTERIAL AND FUNGAL STRAIN

CONCLUSION: Pterocarpus marsupium has a long history of numerous traditional and ethno-botanical applications in diverse cultures. Evaluation of physicochemical parameters is a vital part in the preparation of modern monograph. Thus ash value, extractive values, moisture content and fluorescence studies determined, which signifies standard parameters to ensure the quality and purity of the crude drug. The phytochemical findings of the study confirms the presence of phenolics, flavonoids and other secondary metabolites in plant which are currently of growing interest owing to their functional properties in promoting human health. From our studies, we conclude that the methanol and aqueous extracts of P.marsupium bark have exhibited significant antimicrobial activity against microbes. It is essential to mention that the methanolic extract has given the best all-round results. These information will be helpful to differentiate Pterocarpus marsupium from the closely related other species and varieties of Pterocarpus. Hence, the studied experimental results are useful for further pharmacological and therapeutical evaluation of the extracts along with the standardization of plant material.

ACKNOWLEDGEMENT: The authors are thankful to USIC (University Science Instrumentation Centre), Gulbarga University for carrying out the elemental analysis.

DISCLOSURE STATEMENT: The authors declare no conflict of interest.