ABSTRACT: A new complex has been synthesized of Zn (II) complex with 6-thioguanine and physicochemical characterized by amperometry, polarography elemental analysis, UV and IR spectroscopy. After Synthesis of metal complex, it was evaluated it for antibacterial activities against various pathogenic microorganisms such as; Streptococcus aureus, Proteus. M., klebsiella pneumonia and Asperginus Niger, Nigrosporan S.P. Sarcoma-180 tumor cell has been used for anticancer screening of metal complex for in vitro study. The result of pharmacological studies with M: L revealed that the complex is more potent as compared to the pure drug as regards to its anticancer activity

INTRODUCTION: 6-thioguanine, 2-amino-7H Purina -6-thiol has been used in treatment of various type of tumors, it is well known that thio-purines inhibit the synthesis of DNA and RNA and have been used successfully in the treatment of acute leukemia 1, 2. Organo-metallic compounds have been used in medicine for centuries. Metal play essential role in pharmaceutical industry. The metalloelements present in trace quantities play vital role at the molecular level in the system. Zinc is most abundant and essential metal in our body system 3. Zn (II) is recognized as an essential metal for normal functioning of our biological system. It is a major constituent of many enzymes involved in the metabolism of DNA and RNA 4. Zn deficiency is associated with impaired growth and large number of diseases 5.

Beside several other important role of Zn in our body system are well known 6-7. It has been observed in favorable cases that metal drug complexes show increase potency then the parent drug 8. Keeping this view in mind the present investigation deal with the bioinorganic studies of the interacting such biologically essential metal Zn(II) and an anticancer drug with 6-thioguanine. The metal ligand complexation equilibrium have been studied and elemental and IR spectral analysis has been worked out which given probable formula for complex is to 1:19. Various pathogenic bacteria like Streptococcus aureus, Prosteus M., klebsiella pneumonia and fungal strains such as Asperginus Niger, Nigrosporan S.P have been applied for microbial study using disc diffusion method. Sarcoma-180 tumor cells are used for the in vitro anticancer study of complex compound, respectively.

For the study of metal: ligand (M: L) complexation equilibrium experiment sets were prepared by keeping overall Zn(II) and Ammonium Buffer (supporting electrolyte) concentration fixed at 2 mM and 0.1M, respectively. The ligand concentration varied from 0.0 to 15mM. The pH of the test solution was adjusted to10.4 ±0.02 using HCl/NaOH solution. The test solutions were de-aerated by bubbling nitrogen gas for 15min before recording the polarogram. The amperometric titrations were performed on a manually operated set up equipped with a poly flex galvanometer and an ajco vernier potentiometer.

The capillary characteristics of DME had m2/3 t 1/6 value of 2.5 mg2/3 S-1/2 at 50 cm effective height of mercury column. A systronics digital pH meter- 335 was used for the pH measurements. Experimental sets each having different but known amount of Zn(II) were prepared in appropriate quantity of supporting electrolyte Ammonium Buffer and pH was adjusted to10.4 ±0.2 and titrated separately against the standard solution of the titled 6-thioguanine whose pH was also adjusted to that of the titrate ( 10.4± 0.2 using NaOH /HCl) at -0.04 V Versus SCE The plateau potential of Zn (II) The current offer each addition of the titrant was read and a curve was plotted between current against volume of titrant added.

Zn (II) and 6-thioguanine were prepared separately in water and were mixed in 1:1 molar ratio the mixture was then refluxed in a round bottom flask for 2h. The complex was marked by precipitation after reducing (complex) was filtered and washed thoroughly to remove any un reacted material, the complex was dried at low temperature and store over P4O10.The results of elemental (C, H, N) and O analysis on the drug and Zn (II) - 6-thioguanine complex was furnished by CDRI Lucknow, India., whereas gravimetric method was used for the estimation of Zinc in synthesized complex10.

Two dilutions viz, 1μm, 10μm of pure drug and its complex was made and then the cells were treated as follows

After addition of the respective solutions, the culture plate was incubated at 37°C for 8 hours. Finally, the cell counts and viability were conducted under microscope after trypan blue staining and compared to the cell cultured in DMEM medium without treatment as control.

Cell Vialibility counts were made by trypan blue dye exclusion test. Two drops of trypan blue were added to each cell culture well and kept for 15 minutes. Now a drop of culture was added to hemocytometer and the number of stained, non stained and total numbers of cells was counted, then the % inhibition was calculated using the following equation:

The experiment of each concentration of the drug and the complex was repeated three times and statistical conclusions were drawn.

Polarographic Behavior of 6-thioguanine with

Zn (II) In 0.1 M KCl at pH 10.4±0.2 the Zn (II) and its complex with ligand under study were found to be reversible and diffusion controlled Polarographic wave which revealed by the log plot slop id versus h respectively on gradual addition of ligand the E1/2 of metal shifted towards more electronegative value indicating the formation of complex (Fig. 1). Lingane’s treatment 17 of observed Polarographic data revealed 1:1 [M: L] Complex formation in solution. 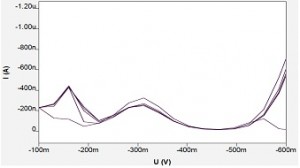 Zn (II) with 6-thioguanine gives a well defined polarographic waves / peak in 0.1 M KCl at 10.4±0.2 pH the diffusion current was found proportional to the concentration of Zn(II). The platue potential for thepolarographic wave of Zn (II) (-0.40V) Vs Hg Pool was applied for carrying out amperometric titration. The Current goes on decreasing to minimum and then attends a constant value. The plot of id versus volume(V+vV) of titrant added, revealed L shaped curve (Fig.2). The end point was indicated by the intersection of the two lines, which confirmed 1:1 [M: L] complex formation 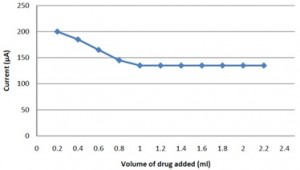 The result of in-vitro experiments of pure drugs and its complex are shown Table 3. Perusals of the data it is compared shown that Zinc 6-thioguanine complex was found to be more effective than pure drug. The complex under study showed an increased inhibition against the Sarcoma-180 tumor cell line at all the test concentrations i.e. 1, 10, μm/ML. The increased inhibition activity of complex was 26.68 ± 1.15%, 53.08± 1.70% as against 19.98 ± 0.43, 41.97 ± 0.98 shown by the drug, respectively. The data were statistically significant as at P< 0.05. 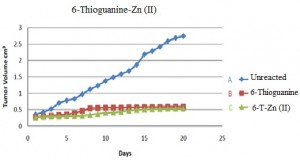 CONCLUSION: To investigate the structure and behavior of complex of 6-thioguanine with life essential metal ion Zn (II) some physicochemical method i.e. IR spectral analysis, elemental analysis, amperometry and polarography has been successfully used. The obtained of these method suggested that complexes having more stable as compared to pure drug. On the basis of observed results of pharmaceutical study Zn (II) with 6-thoguanine complex it could be concluded that drug complex with life essential metal more effective and non toxic in nature as compared to the parent drug. Thus polarographic and amperometric method may be recommended as more potent drug in lieu of the drug taken for present study have excellent potential for clinical application.

ACKNOWLEDGEMENT: Authors are thankful to the management of B.T. Institute of Research & Technology, Sironja Sagar (MP) for providing necessary facilities for doing this work.