INTRODUCTION: From ancient times, medicinal herbs have been use in one form or another, under indigenous systems of medicine like Ayurveda, Sidha and Unani 1. Herbal medicines are promising choice over modern synthetic drugs as they show minimum or no side effects and are considered to be safe 2.

According to WHO, 80% of the world’s inhabitants problem should treated by medicinal herbal drug for their primary health care 1. There are various medicinal plants which have significant medicinal values and are widely used in folklore medicine. The literature reveals that flavonoids, alkaloids, terpenes of plant derived products have received considerable attention in recent years due to their diverse pharmacological properties including cytotoxicity and cancer chemopreventive effects 3.

There are several factors which are responsible for causing various diseases and complications of the human health. In this present study, we have focused on the major two issues related to their complications on human health, multidrug resistant microorganisms and oxidative stress.

The present problem in the pharmaceutical industry is the wide prevalence of the multidrug resistant bacteria. The problem of microbial resistance of growing and the outlook for the use of antimicrobial drugs in the future is still uncertain 4.

So, there is a need to evaluate the plant as the source of potential chemotherapeutic agent, antimicrobial agent and their ethno medicinal use 5.

Another factor that inevitably affects the human health is the generation of free radicals. Free radicals such as Reactive oxygen species (ROS) are small, highly reactive, oxygen-containing molecules continuously in the cells as a consequence of both enzymatic and non-enzymatic reactions 6 and can react with and damage complex cellular molecules such as fats, proteins, or DNA 7. In low/moderate concentrations free radicals are involved in normal physiological functions but excess production of free radicals or decrease in antioxidant level leads to oxidative stress 8.

Oxidative stress is apparent in pathology associated with aging and many age-related chronic diseases, including atherosclerosis, diabetes mellitus, rheumatoid arthritis, and neurodegenerative diseases 9. There are synthetic antioxidants such as butylated hydoxyanisole (BHA), butylated hydoxytoluene (BHT), Propylgallate (PG), and test butylated hydroquinone, but owing to their side effects such as liver damage and carcinogenesis 10, 11. Therefore, there is a need for isolation and characterization of natural antioxidant having less or no side effects, for use in foods or medicinal materials to replace synthetic antioxidants 12.

Plants may possess pharmacological properties, but they may also be toxic or mutagenic. The toxic effects of most widely used medicinal plants are not well documented in the literature although one might expect plants used in traditional medicine over a long period to be safe 13. The severity of toxicity produced by any chemical is directly proportional to the concentration and the exposure time and this depends on the developmental stage of an organism and its physiological status 14.

Syzygium cumini (L.) is one such traditional medicinal plant of Indian origin, belonging to family Myrtaceae 2, 4, 15. It is commonly known as Jamun (Hindi) 2, Naaval (Tamil) 15, Java plum, Black plum, Jambul and Indian Blackberry 16, 17. The medicinal value of S. cumini lies in its leaves, fruits, seed and bark. The seeds of S. cumini are widely considered to have anti-diabetic properties 2, 4.

The fruits 18 and leaves 19 of S. cumini have unique anti-oxidant activity. Earlier studies showed that the seeds have significant anti-inflammatory 20, anticancerous 3 and central nervous system 15 activities. In this present study, the ethanolic extract of S. cumini seed in regard to its antibacterial, in vitro antioxidant and in vitro cytotoxic activities were evaluated.

Collection of plant material and extraction: The seeds were collected from the Coimbatore area in the year 2010. The plants & seeds were identified and authenticated by Prof. V.S. Ramachandran, Dept. of Botany, Bharathiar University, Coimbatore. The seeds of the plant S. cumini were thoroughly washed and dried at 37oC. The dried seeds were further pulverized into fine powder. 25gm of the powdered seed was taken for the extraction purpose in ethanol as the solvent, by using Soxhlet’s apparatus. This seed extract was used for studying the various antibacterial, in vitro antioxidant and cytotoxicity assays. All chemicals used were of analytical grade.

Antibacterial assay: The antibacterial activities of S. cumini seed ethanolic extract against different gram positive and gram negative bacteria were carried out by Agar well diffusion method on nutrient agar plates 23. Test organisms used were Staphylococcus aureus, Klebsiella pneumoniae, Escherichia coli, Enterococcus faecalis and Pseudomonas aeruginosa. Different concentrations (50 mg/ml- 250 mg/ml) of seed extract were made and the zone of inhibition was calculated for each concentration. Antibiotics such as Kanamycin (30mcg), Norphoxacin (10mcg) and Cephalothin (5mcg) were used as the standards. The Minimum inhibitory concentration (MIC) of the sample was determined by Serial tube dilution technique 24.

DPPH Free Radical Scavenging Assay: 1ml of 0.1mM 2, 2-Diphenyl picrylhydrazyl (DPPH) in ethanol, was added to different concentrations of S. cumini seed extract. The reaction mixture was well shaken and incubated in dark for 30 mins. Absorbance was checked at 517 nm against a blank (ethanol). Ascorbic acid was taken as the standard. Lower the absorbance of the reaction mixture indicates higher percentage of scavenging activity. The percentage of inhibition or scavenging of free radicals was determined by the formulae;

Where control was prepared as above without extract 27,28.

Reducing Power Assay: 500 μl of each concentration of seed extract was mixed with 2.5 ml phosphate buffer (0.2 M, pH 6.6) and 2.5 ml potassium ferricyanide (10g/l), then the mixture was incubated at 50º C for 20 minutes. 2.5 ml of trichloroacetic acid (100g/l) was added to the mixture, which was then centrifuged at 3000 rpm for 10 min. Finally, 2.5 ml of the supernatant solution was mixed with 2.5 ml of distilled water and 0.5 ml FeCl3 (1g/l) and absorbance measured at 700nm in UV-Visible Spectrophotometer. Ascorbic acid was used as standard and phosphate buffer used as blank solution. Increased absorbance of the reaction mixture indicates stronger reducing power 29, 30.

Total Antioxidant Capacity: 0.1 ml of different concentrations of seed extract were mixed in separate eppendorf with 1 ml of reagent solution (0.6 M sulfuric acid, 28mM sodium phosphate and 4mM ammonium molybdate; mixed in 1:1:1 ratio) respectively. The tubes were capped and incubated in a thermal block at 95°C for 90 min. After cooling to room temperature, the absorbance of the aqueous solution of each was measured at 695 nm against a blank. Ascorbic acid was used as the standard and the total antioxidant capacity was expressed as equivalents of ascorbic acid 31.

Cytotoxicity Assay: The cytotoxicity activity of the seed ethanolic extract was done by Trypan blue dye exclusion technique 32. The tumor cells were procured by using HeLa Cervical cancer cell line, purchased from National Centre for Cell Science, Pune. The tumor cells were maintained in RPMI-1640 medium. Different concentrations of extracts were prepared diluting with RPMI-1640 medium and were added to 100 μl of cell suspension. After 3 hours of incubation, percentage of mortality was calculated using trypan blue (0.4%) under haemocytometer, control was prepared same as above except extract. The percentage of mortality was calculated using the formulae: Percent (%) of mortality = (number of non viable cells/ total number of cells) x 100.

Statistical Analysis: All the grouped data were statistically evaluated with SPSS/16 software. Hypothesis testing methods included Student’s t test followed by least significant difference (LSD) test. P values of less than 0.05 were considered to indicate statistical significance. Values are presented as the mean ± S.D. of each three replicates in each experiment.

Phytochemical Qualitative Analysis: A variety of herbs and herbal extracts contain different phytochemicals with biological activity that can be of valuable therapeutic index 33. Table 1 shows the presence of various phytoconstituents in the aqueous and ethanolic extracts of S. cumini seed. The performed qualitative studies indicate the presence of various phytoconstituents except glycosides and anthroquinones in the ethanolic extract of S. cumini seed. These phytoconstituents might be responsible for different biological activities and medicinal importance of this seed. 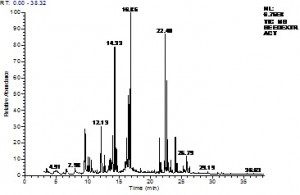 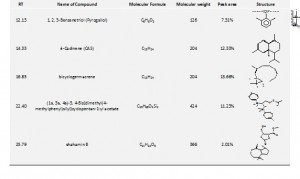 The minimum inhibitory concentration (MIC) represents the concentration of antimicrobial at which there is complete inhibition of growth of organism 34. The MIC was determined by Serial tube dilution technique. The MIC value of the seed extract against E. coli, P. aeruginosa and E. faecalis was found to be 6.25mg/ml whereas against S. aureus and K. pneumoniae, MIC value was 3.13 mg/ml. 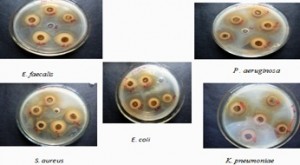 Total phenolic content: S. cumini is known to be very rich in gallic and ellagic acid polyphenol derivatives 35, 36. The presence of high amount of polyphenols in the S. cumini seed was also evaluated from the estimation of total phenolic content of the seed extract by the Folin-Ciocalteau method, which was found to be 200.83±3.81 mg per gm of ethanolic extract of the S. cumini seed expressed as mg of Gallic acid equivalents. The phenolic compounds are very important plant constituents because of their antioxidant activities 37.

DPPH Free Radical Scavenging Assay: Figure 3 shows the DPPH Free Radical Scavenging Assay of S. cumini seed ethanolic extract (Sc) where ascorbic acid (AA) was taken as standard. A freshly prepared DPPH solution exhibited a deep purple color with a maximum absorption at 517 nm. This purple color disappears when an antioxidant is present in the medium. Thus, antioxidants molecules can quench DPPH free radicals and convert them to a colorless product, resulting in a decrease in absorbance at 517 nm 38. The DPPH free radical scavenging assay showed potent inhibitory capacity of S. cumini seed extract when compared with ascorbic acid. The percentage of inhibition of free radicals increased with increase in concentration of substrates.

Reducing Power Assay: Figure 4 shows the Reducing Power Assay of S. cumini seed ethanolic extract (Sc) where ascorbic acid (AA) was taken as standard. The reducing ability of a compound depends on the presence of reductants 39 which have been shown to exert antioxidant action by breaking the free radical chain by donating a hydrogen atom 40. Presence of reducers causes the conversion of the Fe3+/ferricyanide complex used in this method to the ferrous form. By measuring the formation of Perl’s Prussian blue at 700 nm, it is possible to determine the Fe2+ concentration 41. S. cumini seed extract was found to have very high reducing ability when compared to the standard and increased with increasing concentration of substrates.

CONCLUSION: This study suggests that the ethanolic extract of Syzygium cumini seed has potent antibacterial, antioxidant and cytotoxic activities. Phytochemical studies showed the presence of polyphenols, tannins, flavonoids, terpenoids etc., which are responsible for the medicinal value of S. cumini seed. This seed extract has high antibacterial activity and thus can be used against multidrug resistant bacteria and as an herbal medicine alternative to the antibiotics. The seed extract of S. cumini contains high amount of polyphenolic components which may be responsible for its potential antioxidant activity.

ACKNOWLEDGEMENT: The authors would like to express their gratitude to Dr. Paul Dinakaran, Chancellor, Dr. Paul P. Appasamy, Vice Chancellor, Dr. Anne Mary Fernandez, Registrar of Karunya University, for providing the necessary facilities for carrying out experiments. We extend our gratitude to SITRA, Coimbatore for carrying out the GCMS analysis and NCCS, Pune for providing with cancer cell line.