ABSTRACT: Family Solanaceae is known for its tropane alkaloids which have many medicinal properties. In our study two Cestrum species namely Cestrum diurnum and Cestrum nocturnum which are also ornamental plants are studied as different parts of the plants possess anti-bacterial, anti-malarial, analgesic, anti-inflammatory, inhibitory effect on central nervous system and wound healing properties. The present study was undertaken to analyse the presence of various phytochemicals such as alkaloids, flavonoids, terpenoids, saponins, steroids through preliminary qualitative phytochemical screening of the leaf extract. HPLC(High Performance Liquid Chromatography) was used for the qualitative and quantitative active principle analysis which revealed the presence of nicotine and nornicotine as major alkaloids and comparative study of the two species showed the presence of these alkaloids in large quantity in Cestrum diurnum. The detailed anatomical studies of the part(s) used help in the correct easy identification of the commercial drug in its purest form.

INTRODUCTION: Plants are the richest source of medicine and have been used since ages for their therapeutic value. A large no. of new pharmacologically active agents which have been explored from natural resources and plants are one of them which lead to the discovery of many clinically useful drugs. The useful plant based drugs contain active principle ingredients which are secondary metabolites also called phytochemicals present in the plants in any part that can be leaves, roots, stem, seeds etc. These phytochemicals can be alkaloids, saponins, tannis, flavonoids and many more.

Two plants namely Cestrum diurnum and Cestrum nocturnum have been selected for the present study from the different areas of Chandigarh. Cestrum diurnum L., (Day Jasmine), also known as “Din ka Raja” blooms during day time is a member of Solanaceae family native of West Indies and introduced to India as an ornamental plant. Because of its fragrant flowers and its moderate size, it is been planted as an ornamental plant 1.

The leaves contain many active constituents which have been used for tropical psoriasis therapy in many parts of the world. Ayurvedic practioners have also started to show interest in the plant. Its leaves are used externally to control itching, psoriasis and patches on skin. Its oil is effective in treating malaria in many African countries. Although leaves are toxic but they contain several active compounds which possess medicinal properties. The plant also shows larvicidal and cardioactive activities 2.

Another plant Cestrum nocturnum L., from the same family is an ornamental plant. Its flower blooms during night time calling it “Night Blooming jasmine”, Night Cestrum and Lady of the Night 3. It is native of tropical and subtropical regions of the world and is found in India too. Its leaves have been used traditionally for treating swellings and burns 4. The oil is effective as its volatile and act as mosquito repellent and have been used in many African countries to cure malaria 5. It is used to treat epilepsy too. Pharmacological studies have shown that it can be used to treat arterial hypertension, and has analgesic, diuretic, antiviral and abortive properties6.

Plant Collection and Identification: Fresh plant samples were collected from two different localities. Identification of species was done by comparing with authenticated herbarium specimens, later confirmed with the help of diagnostic keys and morphological descriptions given in various floras. The useful parts such as leaves, stems etc. were separated and preserved for study.

Anatomical Study of the Plants: The comparative account of anatomical features of plant parts such as leaf and stem are shown in the Table 1 and 2. 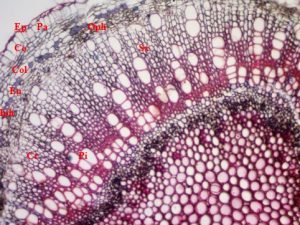 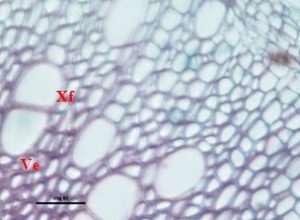 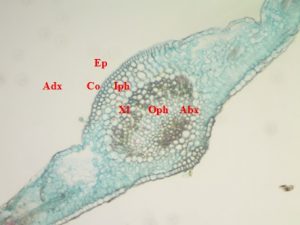 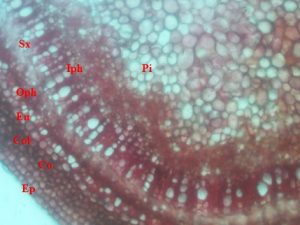 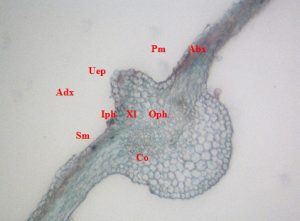 Phytochemical Studies: Different phytochemical constituents analysed from two species of Cestrum are given below: The qualitative analysis revealed the presence of alkaloids, glycosides,saponins and flavonoids in all three extracts in both the species.

HPLC profiles of both the species: In the present study, it has been observed that in case of Cestrum diurnum maximum peak area was observed as 20530 with retention time 4.345 whereas in case of C.nocturnum the maximum peak area was observed at 808 with retention time 4.340. The peaks were observed by comparing with the reference standard which showed the maximum retention time of 4.578. Hence from the chromatograms it is clearly observed that Cestrum diurnum has maximum peak area with more amount of alkaloid content present as compared to C. nocturnum. One more peak has been identified which is of nornicotine but its has less retention time i.e. 3.796 and 3.604 in C. diurnum and C. nocturnum respectively. The chromatograms of HPLC profile of standard, and both the species have been given in the Fig. 7, 8 and 9 respectively.

DISCUSSION: Qualitative screening of phyto- chemical constituents reveal the presence of alkaloids, flavonoids, saponins, glycosides in all the extracts in the Table 3 and 4  whereas tannins are absent in aqueous and methanolic extracts of Cestrum nocturnum and steroids and terpenoids are absent in aqueous extracts in Cestrum diurnum. Pharmacological studies have demonstrated that the leaf extracts  possess nicotine as major alkaloid along with nornicotine which is found to be maximum in Cestrum diurnum as shown in the Fig. 8 and 9 through its peak area when studied through HPLC.These alkaloids possess wide range of medicinal properties such as  antibacterial, antiinflammatory, antispasmodic, expectorant and vermifuge properties 8. The anatomical studies of the part(s) used help to identify the distinguishing features. Since the drug is primarily obtained from leaves these have been studied in detail to prevent adulteration of commercial drug by users. Certain diagnostic features of morphology and anatomy have been found useful for the correct identification of species of Cestrum plant in the field to obtain the drug in its purest form.

CONCLUSION: Approaches like screening, phytochemical profiling of these plants helps to find out elite species. The correct identification of the herbal drugs of commerce help to check piracy of these drugs and hence make available true botanicals to consumers  and  manufacturers of drugs for its correct use as medicine which depends on the exact amount needed to make it more efficient source of medicine for its use in the best possible way.

ACKNOWLEDGEMENT: This research was supported by UGC, New Delhi, India is greatly acknowledged. I am also very thankful to Department of Botany, Panjab University, Chandigarh for providing the necessary facilities.

Nishtha*, Richa and A. Rao