ABSTRACT: Bryophytes possess a pool of bioactive compounds with pharmacological activity. These plants have widely been used as medicinal plants since ancient times and are not infected by bacteria and fungi as they use chemical weapons in the form of secondary metabolites. In order to evaluate the antifungal activity of aqueous crude extract of Bryum cellulare (a moss) against the test fungi Curvularia lunata the causal organism of leaf spot of wheat and Drechslera maydis the causal organism of leaf blight of Zea mays was determined using pour plate method. The results revealed that the colony diameter and fresh weight of test organism under the effect of different concentrations was found to be maximum in lower concentrations and minimum in higher concentrations of Bryum cellulare. A phyotochemical screening of the extracts was also carried out to determine the antifungal substances. The results showed that the extract posses good antifungal activity but to varying degrees.

INTRODUCTION: Bryophytes have been traditionally used for treating various skin disorders and injuries. From bryophytes, a pool of bioactive compounds are isolated and characterized with their pharmacological activity. The biological activities of bryophytes are due to lipophilic monosesqui and diterpenoids, aromatic compounds and acetogenins 1. Marchantia species had been used as herbal medicine in ancient China. Many bioactive components, particularly the conjugated polyphenols, have been isolated from many Marchantia species. Humulane type sesquiterpenes and bis(bibenzyl) are isolated and characterized from  Marchantia emarginata  2.

The reports on biological activities of bryophyte extracts and unknown potentials of these second biggest groups of land plants with about 25,000 to 28,000 species and much more infrataxa world wide are reviewed by Sabovljevic and Sabovljevic 3-4.

Subhisha and Subramoniam 5 reported that many bryophytes exhibit antimicrobial effects against fungi and bacteria. Asakawa 6 investigated that almost all species bryophytes are not damaged by insect larvae, fungi, bacteria, slugs and snails because, biological compounds like oligosaccharides, polysaccharides, sugar, alcohols, amino acids, fatty acids, aliphatic compounds, phenylquinone and aromatic and phenolic substances in bryophytes are protected against these organisms. Therefore, bryophytes have the potential for medical use. Deora et al.  7 studied three bryophytes Plagiochasma articulalum, Anthoceros longii, Fissidend bryoides; liverwort, hornwort and moss respectively for their antibiotic effect on Agrobacterium tumifacians. The result showed that mosses are highly antibiotic in nature followed by hornwort and liverworts. Deora and Guhil 8 evaluate the antifungal properties of moss Bryum cellulare extract on fungus Drechslera maydis using hanging drop method. The results showed that all the extracts posses significant antifungal activity but to varying degrees.

The highest inhibition in spore germination per cent was observed in ethanolic extract of Bryum cellulare. Deora and Guhil 9 evaluate the antifungal potential of moss Bryum argentium and Bryum cellulare against the phytopathogenic fungi Curvularia lunata, the causal organism of leaf spot of Zea mays using pour plate method. The results revealed that at all concentrations B.argentium is most efficacious followed by the extract of B.cellulare. Deora and Guhil 10 investigate the study of bryophytes in relation to soil and climatic condition with three bryoecological zones. These zones are arid and semi arid, the plateau and the southern region having different climatic condition and vegetation.

It was reported that plants perennate in adverse climatic condition by the formation of gemmae, tubers, meristematic rolling apical apices and some other vegetative parts of the plants. The aim of the present study was to find out the antifungal acitivity of Bryum cellulare against phytopathogenic fungi Drechslera maydis. Phytochemical screening of different extract will also carried out to detect the presence of secondary metabolites.

The moss Bryum cellulare was collected in rainy season (2013) from Mt. Abu, Distt. Sirohi (Raj.) around Nakki Lake, Guru Shikhar and Sunset point in both vegetative and sporophytic phases. The fresh plant material was washed with distilled water to remove soil particles, attached litter, dead material and then it was weighted and grinded in mortar and pestle with equal amount of sterilized distilled water (1:1) till the formation of fine paste, then it was centrifuged and filtered. This filtrate was used as standard plant extract solution (100%). Further, the extract was serially diluted by adding sterilized water to prepare various concentrations from 10-100 per cent.

The test fungi Curvularia lunata (MTCC No.283) was obtained from the Institute of Microbial Technology, Chandigarh, India. This test organism was sub-cultured in laboratory at 30ºC temperature to obtain its pure isolates.

Antifungal activity of bryophyte fraction was determined by using pour plate method. The plant extracts of 10 ml each were first poured into petri dishes. Then, 10 ml molten PDA was poured aseptically on the plant extract in the petri dishes and swirled round for even dispersion of the extract into the agar.

This extracts was incorporated at different concentrations of 100, 80, 60, 40, 20 and control. A 5 mm mycelium agar disc of C. lunata was released into the poisoned agar/ extracts incorporated into PDA. The treatments were replicated threetimes; incubation period for antifungal activity was 72 hrs. The average diameter of resultant colony was measured after incubation. The growth of C. lunata mycelium on PDA without any amendment was used as control. The percent inhibition of mycelial growth by plant extract was calculated by using the formula given by Vincent (1927)

Qualitative phytochemical analysis of a moss Bryum argenteum and Bryum cellulare extract was done by the methods of Trease and Evans 11 to detect the presence or absence of certain bioactive compounds.

On the basis of results obtained it was evaluated that higher concentration inhibited the growth of both the test fungi but among the two test organism studied C. lunata exhibited most sensitivity against aqueous crude extract of Bryum cellulare followed by Drechslera maydis respectively.

The result of this work corresponded to the findings of Deora et al., 12 who determined the antifungal activity of a moss against certain phytopathogenic fungi. Deora and Suhalka 13 studied the effect of liverwort R. gangetica against F. moniliforme and found cold water extract was more effective than boiled water extract. Bodade et al., 14 evaluate the antimicrobial effect of Plagiochasma appendiculatum, Thuidium cymbifolium, Bryum cellulare, Bryum argentium and Racomitrium crispulum on 12 microorganisms. Solubility data and antibiotic spectra of th active plants indicated the occurrence of the variety of antibiotic substances among bryophytes. 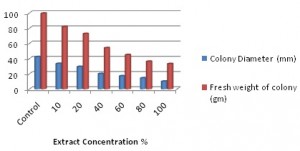 CONCLUSION: Results of the present study conclude that all the aqueous crude extract of Bryum cellul are exhibited varying degrees of antifungal activities against C. lunata and D. maydis but aqueous extract of this moss was found to be most effective against C. lunata followed by D. maydis. Therefore, after further biochemical assay the extracts of this plant can be used as mycoherbicide to control certain plant pathogens.

ACKNOWLEDGEMENT: The authors are thankful to Principal and Head- Department of Botany, Faculty of Science, B.N.P.G College Udaipur (Raj), for providing necessary facilities