ABSTRACT: The objectives of the present study were to evaluate the preliminary phytochemical analysis (quantitative and qualitative) and DPPH antioxidant activity of two traditionally important plants occurring at Purulia district of West Bengal in India. Qualitative analysis of phytochemicals (flavonoid, alkaloid, terpenoids, saponins, phenol and carbohydrate) and quantitative analysis of total phenolics and flavonoids were done by using suitable test protocols available in the literature. Antioxidant activity was studied through DPPH assay. Qualitative phytotochemical analysis revealed that the methanolic extract exhibit richness in flavonoids, alkaloids, terpenoids, saponins, phenols and carbohydrates in comparison with aqueous extract. Total phenol and flavonoid content shows highest concentration in methanolic part of A. aspera (1.129mg GA EQ/gm, 3.22mg QEQ/gm) and lowest concentration in aqueous part of S cordifolia (.348mg GA EQ/gm, .324mg QEQ/gm). EC50 values of the two plants were 48.06µg/ml in A. aspera and 52.43µg/ml in S. cordifolia. The results conclude that there is positive correlation between total phenol content and DPPH antioxidant activity. The plants could serve as potential source of natural antioxidants.

INTRODUCTION: The superoxide anion (O2) hydrogen peroxide (H2O2) and hydroxyl radical (-OH) are the forms of active oxygen and free radicals. These free radicals or reactive oxygen species (ROS) are formed in the human body through normal metabolic action and play a role in heart diseases, neurodegenerative diseases, cancer and in the aging process 1, 2. Plants are potential source of natural antioxidants. Natural antioxidants or phytochemicals such as flavonoids, phenolic acids, alkaloids, lignins, stilbenes, and tannins are well known free radical scavengers and possess multiple biological activities including anti-oxidant activity 3.

The synthetic antioxidants were create the genotoxic effect 4 and other chronic diseases 5. Some authors previously reported that extracts of A. aspera were found to contain protein, glycosides, alkaloids, tannins and phenolic compound, steroid reducing sugars and saponin glycosides 6, 7 and the DPPH radical scavenging potential of aqueous and methanol extracts of A. aspera followed the dose dependent pattern 8.

Similarly Sida cordifolia showed the presence of alkaloids, steroids, flavonoids, phytosterols, lignins, and macronutrient analysis revealed the presence of proteins, carbohydrates, reducing sugar, fats and oil 9. In DPPH scavenging assay the IC50 value was found to be 50µg/mL which was not comparable to the standard ascorbic acid 10. Although a number of plants traditionally been used by the people of Purulia district for the treatment of different diseases e.g. skin diseases, gynecological disorders, arthritis 11, 12 etc. but only a few plants studied in detail on phytochemical analysis and antioxidant activity. So the aim of the present study is to evaluate the DPPH antioxidant activity and phytochemical analysis of two plants collected from Purulia district, West Bengal, India.

Chemicals and Reagents: All the chemicals used in the study were of analytical grade and procured from Merck India Pvt. Ltd.

TABLE 1: LIST OF TRADITIONALLY USED PLANTS FOR THE TREATMENT OF CARBUNCLE AND ALZHEIMER DISEASE

Collection of Plant Material: Traditionally used plants including Sida cordifolia (Malvaceae), Achyranthes aspera, were taken for experiment. The plants were identified and authenticated by Dr. Bsanta Kumar Sing, Botanical Survey of India, Kolkata and documented in the herbarium of A.M. College, Jhalda. The plant materials were collected during flowering period and washed with running tap water for several times then shade dried for eleven days and powdered by using electric blender and stored in airtight bottles.

Preparation of the Extract: The powdered plant parts were extracted with methanol water (9:1) by using soxhlet apparatus for 72 hours. Resulting extracts was filtered using what man filter paper no.1 and concentrated in vacuum to dryness using a Rotary evaporator. The powder was weighed and dissolved in methanol and water separately and stored in a refrigerator at 4 °C for further analysis.

Qualitative Phytochemical Screening: Preliminary qualitative phytochemical analysis of methanol and aqueous extract of the plants A. aspera and S. cordifolia were carried out using the standard procedures 14 - 15.

Estimation of Total Phenol by Folin-Ciocalteu Reagent Method: The total phenolic content (TPC) was determined by a Folin-ciocalteu assay using gallic acid (GA) as the standard 16 with slight modification.

The mixture of the sample solution (1ml), 1ml of Folin-ciocalteu’s reagents, 10% Na2CO3 (1ml) and distilled water (7ml), was vortexed and incubated for 25 min in dark at room temperature. The quantification of phenolic compounds was performed spectrophotometrically by measuring the absorbance in UV-VIS spectrophotometer at 765nm against blank which contain a mixture of 1ml methanol water, 1ml of Folin-ciocalteu’s reagents and 1ml of 10% Na2CO3.

Estimation of Total Flavonoids by AlCl3 method: Aluminium chloride colorimetric method was used to determine the total flavonoids 17 with slight modifications. Total flavonoid content was determined using quercetin as standard. The mixture of 10% of 100µl of Alcl3, 100µl NaNO3 (5%), 670µl of 1 milimolar NaOH and 100µl of sample was vortexes and incubated in dark at room temperature for 25 min. The O.D. value was measured by spectrophotometer at 510nm.

In vitro Antioxidant Assay DPPH Radical Scavenging Assay: The antioxidant activity of the extract was measured with the DPPH method 18 with slight modifications. Briefly, powdered samples dissolved in methanolic water (9:1) for 72 hours then centrifuged at 30 °C for 10 min at 10000 rpm and different concentration were made by serial dilution method using methanol water as diluents and mixed with 0.16mM methanol DPPH (1:3), incubated at room temperature in the dark for 30 min. Similar protocol was followed for ascorbic acid for comparison and 3:1ml mixture of methanol DPPH and methanol water was employed as negative control. The degree of decolourisation of DPPH was determined by measuring the O.D. at 517nm in jasco V-630, USA.

The capability of scavenging DPPH radicals was calculated by the following equation: Scavenging effect % = [1-(O.D. sample/O.D. control)] X 100. The Scavenging effect % was plotted against the sample concentrations and a logarithmic regression curve was established in order to calculate the EC50 value (mg/uL) which is the concentration of the extract that inhibited DPPH by 50%.

Estimation of Total Phenol by Folin-Ciocalteu Reagent Method: Phenolic compounds contain hydroxyl groups (-OH) that facilitate their free radical scavenging activity and act as antioxidants, the total phenolic concentration could be used as a basis for rapid screening of antioxidant activity 19. The TPC was expressed in terms of gallic acid equivalents (mg of GAE/gm sample) using the following equation based on the calibration curve: Y = 0.007x -0.036 R2 = 0.997 where x was the absorbance and Y was the mg GAE/gm sample. The values obtained for the concentrations of total phenolic content are expressed as mg of GAE/gm of sample (Fig. 1). Total phenolic contents of two medicinal plants obtained from two solvent systems vary from 1.129 mg GAE/gm to 0.348 mg GAE/gm (Table 4). However total phenolic content of 90% methanolic extract of A. aspera was observed to be maximum (1.129mg GAE/gm) and that of aqueous extract of S. cordifolia was the lowest (0.348mg GAE/gm). 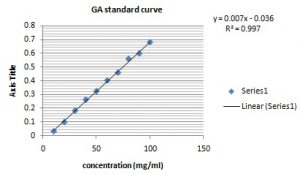 Total Flavonoid Content: Flavonoid (flavones, flavanols and condensed tannins) shows antioxidant activity due to the presence of free -OH groups, especially 3-OH. Plant flavonoids have antioxidant activity in vitro and also act as antioxidants in vivo 20. Total flavonoid contents of two medicinal plants obtained from two solvent systems vary from 3.22 mg of QE/gm to 0.324 mg QE/gm (Table 5). However total flavonoid content of 90% methanolic extract of A. aspera was observed to be maximum (3.22mg QE/gm) and that of aqueous extract of S cordifolia was the lowest (0.324mg QE/gm).

DPPH Antioxidant Activity: DPPH, a purple-colored, stable free radical is reduced to the yellow-colored diphenylpicrylhydrazine when antioxidants are added. The antioxidant capacity of the extracts (EC50) were estimated and compared with ascorbic acid (positive control) using the stable DPPH radical. The results of the experiment for antioxidant activity are shown in Fig. 2 and 3. The examination of antioxidant activity of extracts from A. aspera and S. cordifolia showed values varied from 10.25% to 84.25% and 9.65% to 79.98% respectively. 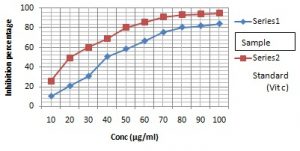 EC50 Value: The EC50 of a compound is inversely related to its antioxidant capacity, as it expresses the amount of antioxidant required to decrease the DPPH concentration by 50%, which is obtained by interpolation from a linear regression analysis. A lower EC50 indicates a higher antioxidant activity of a compound.

Table 6 shows the EC50 values in the DPPH radical scavenging activity assay of the extracts. It was found that the antioxidant activity in A. aspera (EC50 = 48.06µg/ml) is greater than S. cordifolia (EC50 = 52.43µg/ml).

CONCLUSION: Phytochemical screening of methanolic and aquous extracts of two herbs A. aspera and S. cordifolia revealed the presence flavonoids, tannins, phenols, saponins, carbohydrates and alkaloids by positive reaction with the respective test reagent. Results obtained in this investigation indicate that the plant extracts of A. aspera rich in phenolics and exhibited highest antioxidant activities. Total phenolic content had positive correlation with antioxidant capacity. The finding of this study suggest that this plant could be a potential source of natural antioxidant that could have great importance as therapeutic agents in preventing or slowing the progress of ageing and age associated oxidative stress related degenerative diseases. Further investigation on the isolation and characterization of the antioxidant constituents is however required.

ACKNOWLEDGEMENT: Authors are thankful to tribal’s for sharing their traditional knowledge and also thanks to UGC for financial support.