ABSTRACTPresent study reports phytochemical screening and   the inhibitory activity of crude extracts of Cassia tora and Cassia sophera (fam: caesalpinaceae) on some human pathogenic bacteria and fungi. The selected plants are edible and used by local herbal medical practitioners to treat various skin infections and respiratory problems. Leaf and flower extracts were prepared with different solvents and tested for the presence of primary and secondary metabolites which are pharmacologically active compounds. Acetone and Aqueous extracts revealed the presence of more constituents including glycosides, phenols, flavonoids alkaloids etc. As many of the active ingredients in chemically manufactured drugs were originally derived from plant compounds, extracts are also used to screen the antimicrobial activity. The results showed very high inhibitory activity against skin pathogens like Staphylococcus and Candida albicans. The zone of inhibition was determined utilizing the well diffusion method. For comparison chloramphenicol and Fluconazole were used as standard reference. Among bacteria used gram positive bacteria and fungus Candida albicans were most inhibited. Flower and leaf extracts showed different activity, revealing differential solubility of phytochemicals. The present study correlates medicinal properties of C. tora and C. sophera and their use in folklore medicine

INTRODUCTION: Herbs have been always principal forms of medicine in ancient India, as early man was close to Mother Nature. But in the name of civilization man is away from nature and due to loss of forests, increased pollution various plants with medicinal properties are vanishing. This has lead living beings to become more susceptible to diseases.

Now as people strive to stay healthy, herbal medicine is becoming popular throughout the world. The herbs provide the starting material for the isolation or synthesis of conventional drugs. Herbs play a significant role, especially in modern time, when the damaging effects of food processing and over medication have assumed alarming proportion. In many developing countries medicinal plants are still being used on regular basis 1. Potent pathogens were selected for study. Staphylococcus causes skin infections and elevates symptoms of psoriasis 2.

Candida species causes opportunistic infections especially in diabetics and AIDS patients 3. It is estimated that about 70000 species (from lichens to trees) have been used for medicinal purposes. Ayurveda alone describes 2000 species which contributes 10000 formulations.

As green herbs continue to fascinate man, as they can cure many illnesses, it is necessary to identify new wild herbs with curative properties. One of such plant cassia tora [Figure 1] has been selected to study its medical and pharmacological properties. This plant is native to Southeast Asia, Fiji, Northern Australia, Africa, and Latin America 4. Study revealed that Cassia tora is one of the endangered herbs in Telangana region 5. It is an edible wild herb grows on roadsides and field margins. It is shrubby, rainy season weed with yellow flowers. It is called as chinnakasinda or tageri in Telugu, sicklesenna in English. 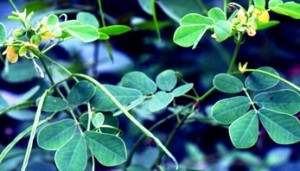 According to Ayurveda, its leaves and seeds are used for a plethora of health problems ranging from skin diseases to cardiac disorders. There is an Ayurvedic formulation of this plant called “chakramadha tailamu”. According to Ayurveda the leaves and seeds are used as laxative, antiperiodic, antihelmentic, cardio tonic, liver tonic, expectorant, to treat glaucoma, psoriasis etc. 2. Decoctions of  parts of  Cassia tora  are used as analgesic, anticonvulsant, antipyretic, antifungal, diuretic, purgative and in treatment of skin infections, ringworm and itch 4.  It is also used as green manure and natural pesticide 6.

Seeds are used as a coffee substitute and has a anodyne action many recent studies suggested that C.tora extract has got therapeutic importance 6.

In the present study, initially, leaves and flowers were selected to prepare the extracts of the plant with different solvents and are used to detect phytochemicals 7 and their inhibitory activity.

Cassia sophera [Fig. 2] is also a medicinally important shrub and edible in several regions. It is used in local traditional medicine for the treatment of inflammatory diseases, psoriasis, cough, arthritis, diabetes and asthma. Chemical analysis of seeds revealed the presence of ascorbic acid, dihydroascorbic acid and beta sistosterol 8. 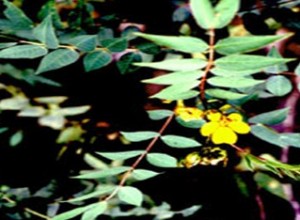 As there are reports on chemical analysis of seeds of these   two plants and these are edible, their leaf extracts were analyzed for their Potential active components and activity

Plant materials and Extraction: Healthy Whole plants with flowers were collected from in and around of Hanamkonda. Leaves and flowers are separately washed, dried and used. There were two methods adopted for the preparation of the extracts. First method adopted was, 100gms Fresh leaves and flowers are ground separately using mortar and pestle with acetone, centrifuged and supernatant is used and the second method was extraction in cold, briefly, plant material is dried in shade at room temperature powdered and 100grams of powder extracted with 200ml of  various solvents like acetone, propanol, butanol, ethanol, chloroform, methanol, and petroleum ether separately. Incubated for 72 hrs with occasional shaking, concentrated and used (100mg/ml). Phytochemical examinations were carried out for different leaf extracts of Cassia tora as per the standard methods following the procedures of Pharmacopoeia India (1985) and other protocols 2, 7. Extracts were separately tested for the presence of various   phytochemicals.

Nutrient agar medium and PDA medium were obtained from Hi Media. The prepared media are sterilized at 121oC for 30 minutes,   dispensed to Petri plates. Nutrient agar medium is used to grow bacteria and PDA is for Candida albicans.        The in vitro antibacterial and antifungal studies were carried out using different solvent extracts of leaves and flowers of Cassia tora and with leaf extracts of C. sophera. A modified agar well diffusion method 8 was used to determine inhibitory activity of extracts. In brief, sterile Nutrient agar and PDA were poured in to sterile Petri plates and allowed to solidify for 30 minutes.  Then 50 ml of fresh culture of bacteria was spread on Petri plates with the help of sterile spreader.

Similarly yeast culture was spread on PDA medium. For agar well diffusion method, wells were made in the agar plats with the help of cork-borer. (0.6 cms) 100 ml of the extract was introduced into the well and the plates were incubated overnight at 37oC. For every bacterial strain and Candida, different solvents were used as control. Chloremphenicol and Fluconazol were used as standard antibacterial and antifungal agents respectively.

Determination of Minimum Inhibitory Concentration (MIC): As acetone and methanol extracts showed greater activity, they were used to detect MIC. It was determined by broth-dilution method. The varying concentrations of extracts (100mg/ml, 80mg/ml, 60mg/ml, 40mg/ml, 40mg/ml, and 10mg/ml) were prepared. 0.1ml of each concentration was added to each 9ml of nutrient broth containing 0.1ml of standardized test organism.(5x105cells (cfu) of the test bacterial strain). The tubes were incubated for 24 hrs at 37oC. A control tube without extract was maintained as positive control. MIC was taken as the highest dilution (least concentration) of extract showing no detectable growth after incubation.

RESULTS: The results indicate that, in the preliminary phytochemical analysis, presence of carbohydrates, proteins, glycosides, phenolics, alkaloids, tannins, saponins, flavonoids and phytosterols were recorded in different extracts. The investigation of   aqueous, acetone, methanol, and chloroform extracts of Cassia tora revealed differences in their phytoconstituents 9. Aqueous and acetone extracts yielded better results. Methanol and chloroform extracts showed moderate results. This reveals that solubility of each constituent in each solvent is different. Further in the present study, leaves and flower extract of cassia tora were used to screen the antibacterial and antifungal activity with different extract [Tables 1-4]. Among all solvents,   acetone extract showed high inhibitory activity against all the bacteria and Candida albicans.

Propanol and ethanol extract showed moderate inhibition.  Leaf extracts were more effective when compared with flower extracts. Petroleum ether extracts were less effective. In case of Cassia sophera also aetone and methanol extracts were more inhibitory compared to flower extracts [figure 3]. Among bacteria used gram positive bacteria like Staphylococcus citreus, and Staphylococcus aureus were most inhibited by all solvent extracts. Gram negative bacteria like E. coli and Klebsiella were more inhibited than others. Candida albicans was inhibited by all solvent extract of flowers and leaves [Figure 4].

This study reveals a fairly good correlation between traditional therapeutic use and in vitro antimicrobial activity. 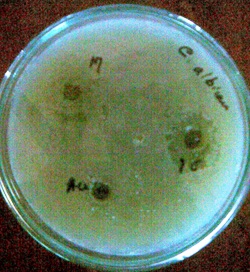 FIGURE 3: INHIBITION OF KLEBSIELLA BY LEAF EXTRACTS OF CASSIA TORA 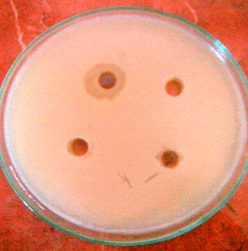 DISCUSSIONS: Though antibiotics provide the main basis for the therapy of bacterial infections, the high genetic variability of bacteria makes them more resistant 9. Thus, there is continuous search for novel drugs. In spite of most of the pharmacological industries have produced a number of new antibiotics during last three decades, resistance to these drugs by microorganisms has increased.

Herbal drugs are gaining   importance due to reduced   side effects and plants have been a valuable source of natural products for maintaining human health. According to World Health Organization, medicinal plants would be the best source to obtain a variety of drugs.

Since 80% of individuals in the developed countries use traditional medicine, which have compounds derived from medicinal plants, it is necessary to evaluate available plants for their antibacterial activity 10. According to recent world health report on infectious diseases, overcoming antibiotic resistance is the major issue of the next millennium 9. So, it is becoming important and need of the hour to use natural products derived from the endangered species to combat the newly emerging diseases and get protection from the different health manifestations.

From this study it is concluded that Cassia tora, an endangered herb has a potentiality in pathogenic microorganism’s management. Further, its function as an active antimiocrobial agent suggests that plant could be exploited in search of new bioactive compounds in the management of diseases. Its curative properties against skin infections and candidiasis may be due to the presence of various secondary metabolites which have to be further studied in detail. Both the plants used are medicinally important but present study emphasizes on their flowers as antimicrobial agents, because they showed fairly good activity against all pathogens used.

The substances present in the medicinal plants can either inhibit the growth of the pathogen or kill them and at the same time have no toxicity to host cells. C. tora and C. sophera are edible in many local regions of AP and Karnataka thus can naturally inhibit many infections. In the present experiment, all the extracts used showed varying degrees of inhibitory action on at least one bacterium. Further extracts of fresh material exhibited good inhibition than dried material. Five different enterobacteria used are inhibited which indicates that C. tora and C. sophera can be included in  regular diet as leafy vegetable to procure their benefits.

ACKNOWLEDGEMENTS: The author is thankful to Dr.Ch.V.Purushotham Reddy, Secretary and Correspondence, Chaitanya Degree & PG College, Hanamkonda, Warangal, for providing the necessary facilities to carry out the present research work.