INTRODUCTION: Medicinal plants contain some organic compounds which provide definite physiological action on the human body and these bioactive substances include tannins, alkaloids, carbohydrates terpenoids, steroids and flavonoids 1. These compounds are synthesized by primary or rather secondary metabolism of living organisms. Secondary metabolites are chemically and taxonomically extremely diverse compounds with obscure function.

They are widely used in the human therapy, veterinary, agriculture, scientific research and countless other areas 2. A large number of phytochemicals belonging to several chemical classes have been shown to have inhibitory effects on all types of microorganisms in vitro3.

Datura stramonium contains different type of phytochemical including Saponins, Tannins, Steroids, Alkaloids, Flavonoids, Phenols and Glycosides 4. Among Solanaceae plants, Datura stramonium L. is highly regarded by the workers, since it has a great resource of tropane alkaloids. Botanical alkaloids are one of the important botanical products and form the major part of medicinal compounds. Tropane alkaloids (i.e. atropine, hyoscyamine and scopolamine) are generally found in Hyosyamous, Datura stramonium L.  and Belladonna. The chemical investigations of Datura demonstrated that leaves and seeds especially were rich in alkaloids, including atropine, hyoscyamine, and scopolamine. These compounds are included in many official pharmacopoeias because of their anticholinergic activities. Recently, several pharmacological investigations have been conducted on Datura. In fact, different extracts obtained from this plant have been reported to exhibit antimicrobial 5 and antifungal activities 6 as well as hypoglycemic7 and antimutagenic properties 8. Thus, the aim of this study is Phytochemical analysis, Antioxidant and Antimicrobial Activities of Methanolic Extract of Datura stramonium Seeds

The dried seeds of Datura stramonium which were obtained from seed pods of Datura plant. These dried seeds were pulverized using sterile laboratory mortar and pestle to obtain the powdered form. These were stored in airtight glass containers protected from sunlight until required for analysis. 20g dried powder of Datura stramonium plant seeds were  weighed and transferred into conical flask for extract preparation as given below.

The dried and powdered seeds were extracted with methanol using soxhlet extractor for 24h at a temperature not exceeding the boiling point of the Solvent 9. The extracts were filtered and then concentrated to dryness, transferred to glass vials and kept at 4º C before use.

The methanolic extract was tested for the presence of various bio-active compounds by using following tests10,11,12.

Mayor‘s test: 2 ml filtrate was mixed with 1% HCl and about 6 drops of Mayor’s reagent was added. A Creamish or pale yellow precipitate appeared which indicated the presence of respective alkaloids.

By magnesium ribbon: 2 ml filtrate was added to concentrated HCl and magnesium ribbon was put into the solution. Pink-tomato red color indicated the presence of flavonoids.

Ninhydrin test: 1 ml of the extract was treated with few drops of Ninhydrin reagent. Purple color indicated the presence of amino acids.

Ferric chloride test: 1 ml of the extract was treated with few drops of 0.1% ferric chloride. Brownish green colour indicated the presence of tannins.

Froth test: 1g of the sample was weighed into a conical flask in which 10ml of sterile distilled water was add and boiled for 5 min. The mixture then filtered and 2.5ml of the filtrate was added to 10ml of sterile distilled water in a test tube. The test tube was shaken vigorously for about 30 seconds. It was then allowed to stand for half an hour. Honeycomb froth indicated the presence of saponins.

Crude extract was mixed with 2ml of chloroform and concentrated H2SO4 was added sidewise. If red colour produces in the lower chloroform layer indicates the presence of steroids.

Fehling’s test: Equal volume of Fehling A and Fehling B reagents were mixed together and 2ml of it was added to crude extract and gently boiled. A brick red precipitate appeared at the bottom of the test tube indicated the presence of carbohydrates.

Salkowski test: 5 ml of extract was mixed in 2 ml of chloroform, and concentrated H2SO4 (3 ml) was carefully added to form a layer. A reddish brown coloration of the inter face was formed to show positive results for the presence of terpenoids.

The DPPH radical scavenging activity assay elucidated by13 was followed. The hydrogen atom or electron donating ability of the corresponding methanolic extract was measured from the bleaching of the purple coloured methanol solution of DPPH. This spectrophotometric assay uses the stable radical, 2,2- diphenylpicrylhydrazyl (DPPH), as a reagent.  The working solution of the test extract was prepared in methanol. BHT and Gallic acid was used as standard in 1-100μg/ml solution. DPPH (0.002%) was prepared in methanol and 1ml of sample solution separately. Their solution mixtures were kept in dark for 30min and absorbance was measured at 517nm. DPPH solution (1ml) was used as blank. The absorbance was recorded and % inhibition was calculated using the formula given below.

A= absorbance of the blank and

B= absorbance of the sample

The Nitric Oxide scavenging method elucidated by 14 was followed. Nitric oxide (NO) was generated from Sodium Nitroprusside (SNP) and was measured by Griess reagent. SNP in aqueous solution at physiological pH spontaneously generates. NO which interacts with oxygen to produce nitrite ions that can be estimated by the use of Griess Reagent. Scavenging of NO compete with oxygen leading to reduced production of NO. SNP (10mM) in phosphate buffer saline (PBS) was mixed with different concentration of extract (100-1000μg/ml) of the drug dissolved in methanol and incubated at 250C for 180 min.

The samples from the above were reacted with Griess reagent (1% sulphanilic acid, 0.1% naphthylamine and 3% phosphoric acid). The absorbance of the chromophores formed during the diazotization of nitrite with sulphanilic acid and subsequent coupling with napthylamine was recorded at 546 nm and referred to the absorbance of gallic acid and BHT, used as positive controls treated in the same way with Griess reagent.

The organisms used comprises of two gram-positive bacteria (S. aureus and B. subtilis) and two gram-negative bacteria (E. coli and P. aeruginosa). The test organisms were obtained from the Research Laboratory of Microbiology and Fermentation Technology SHIATS, Allahabad, India.

Agar well diffusion method elucidated by15 was followed. The antibacterial activity of crude methanolic extract of Datura stramonium seeds against four pathogenic bacteria was evaluated by using agar well diffusion method. The Nutrient agar plates were prepared by pouring 15 ml of molten media into sterile petri-plates. About (108-109) colony- forming unit per ml were used. Wells or cups of 5mm size were made with sterile borer into agar plates containing the bacterial inoculum. 10μL of microbial broth was spread on the surface of nutrient agar plates, 20μL volume of the sample extract of concentration (2mg/ml) was poured into a well of inoculated plates. Ampicillin (2mg/ml) was used as a positive control which was introduced into the well instead of plant extract.

Solvent methanol was used as a negative control which was introduced into well instead of plant extract. The plates thus prepared were kept at room temperature for ten minutes allowing the diffusion of the extract into the agar 16. After incubation for 24 hrs at 370C, the plates were observed. The antibacterial activity was present on the plates; it was indicated by an inhibition zone surrounding the well containing the plant extract. The zone of inhibition was measured and expressed in millimeters. Antibacterial activity was recorded when radius of zone of inhibition was greater than 4mm 17. The  antibacterial activity results  was considered as inactive if < 4.5 mm; 4.5-6mm as partially active ; while 6.5-9 mm as active and greater than 9mm as very active 18.

The phytochemical screening of methanolic extract of Datura stramonium seeds was performed by using various tests and the results obtained are shown in Table 1 given below: 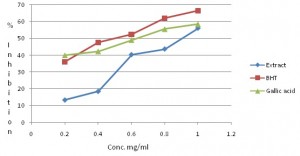 Nitric oxide generated from sodium nitroprusside in aqueous solution at physiological pH interacts with oxygen to produce nitrite ions which were measured by Griess Reaction. Nitric oxide radical generated from nitroprusside at physiological pH was found to be inhibited by the methanolic extract as shown in the (Table 3 and Fig. 2). The IC50 values have been found to be 0.70mg/ml, 0.65mg/ml and 0.60mg/ml for the methanolic extract, gallic acid and BHT respectively. 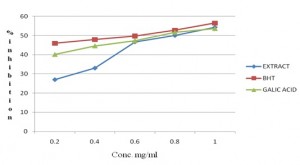 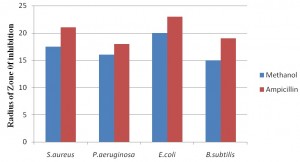 CONCLUSION: On the basis of results obtained it can be concluded that Datura stramonium seeds possess alkaloids and flavonoids and have potent antioxidant and antibacterial activities. Further the potential of this plant can be explored more and more, in order to develop an alternative therapy for treatment of various diseases. The present study also suggests that the use of this medicinal plant may be exploited for health supplements. Thus justifying its traditional use.

AKNOWLEDGEMENT: The authors sincerely thank the authorities of department of Chemistry and department of Microbiology, SHIATS for their support in completion of the work.