INTRODUCTION: Medicinal plants regarded as one of the main source of drug for the health of individual and communities 1. The information about medicinal properties of plant has been obtained on the basis of various medicinal systems such as Ayurveda, Unani and Siddha during many centuries 2. All the existing medicinal plants considered as main source for the invention of new drugs beneficial to human beings 3. Phytoconstituents are the natural bioactive compounds found within plants. These phytoconstituents along with nutrients form integral defense system to protect against various diseases 4.

During last few decades UV, FTIR and GC-MS were acted as powerful techniques for the identification, separation and structural determination of phytochemicals5. Phytoconstituents determination is easily performed by using gas chromatography (GC) and liquid chromatography (LC) technique with definite revealing system. Gas chromatography- mass spectroscopy (GC-MS) helped in identification of compounds at less than 1 mg 6. Commonly GC-MS applied for drug detection, environmental investigation and detection of unknown samples. GC-MS technique has been founds very effective for the separation and recognition of composite mixtures of phytochemicals 7.

Spectroscopic methods such as UV-Visible and FTIR can be used together or separately as conventional methods to detect phytoconstituents 11. Hence, the objective of the present study is to identify the phytochemical constituents of Ampelocissus latifolia by using UV-VIS, FTIR and GC-MS technique.

MATERIAL AND METHODS:
Collection of plant material:
The plant material of Ampelocissus latifolia was collected during September- October 2013 from Wasali forest area of Buldhana District, Maharashtra, India. Plant was identified by using various floras. Herbarium specimen of the plant was deposited at Department of Botany, Shri Shivaji Science and Arts College Chikhli. Tuberous roots were collected, thoroughly washed with water to remove foreign matter; shade dried and then grinds into fine powdered by using mechanical grinder.

Extraction of plant sample:
The grinded, fine powdered of tuberous root was subjected to extraction by using soxhlet apparatus. About 20 gm of tuberous root powdered was successively extracted with ethanol for 8 hrs. Ethanol extract was filtered through Whatman No. 1 filter paper and the filtrate was collected (crude extracts). Ethanol extract was concentrated, solidified and used for further studies.

UV-VIS Spectroscopic analysis:
Ethanol extract of Ampelocissus latifolia tuberous root was examined under UV and Visible light for immediate investigation. Such ethanol extract of tuberous root was centrifuged at 3000 rpm for 10 minutes and filtered through filter paper (Whatman No.1) under high pressure of vacuum pump. The sample was diluted to 1:10 by using same solvents. The extract scanned in the wavelength range from 190-1100 nm using EQUIPS- TRONICS (EQ-826) Spectrophotometer and the peaks were detected.

FTIR Spectroscopic analysis:
Dried powdered of ethanol extract of Ampelocissus latifolia tuberous root was used for FTIR analysis. The dried 10 mg of extract powdered was mixed with KBr salt and encapsulated in 100 mg of KBr pellet in order to prepare translucent sample discs. The infrared spectrum of solid was recorded in the scan range from 4400-450 cm-1 on a FTIR spectrophotometer, Perkin Elmer Spectrum (RX1) with a resolution of 1cm-1. Perkin Elmer spectrophotometer was used to detect characteristic peak and their functional group.

GC-MS analysis:
The composition of ethanol extract of Ampelocissus latifolia tuberous root was analyzed by using GC-MS instrument (AccuTOF GCV). The GC-MS system was equipped with a FID detector and capillary column of HP-1 (30 m x 0.25 mm; film thickness 0.25 μm). Helium was used as carrier gas at a flow rate of 1ml/min and a split injector (split ratio 1:10). The oven temperature was programmed from 80-2600 C at the rate of 10ºC/min and held at this temperature for 3 minutes and then increased to 280ºC at 5ºC/minute and held at this temperature for 9 min. The injector and detector temperatures were set at 2500 C and 2800 C respectively. Ethanol extract sample (0.1 μl) was injected into GC-MS instrument for its analysis. Ion source temperatures were maintained at 2000 C and the mass spectra were taken at 70eV.

Identification of Components:
Interpretation of mass spectrum GC-MS was conducted using data base of National Institute Standard and Technology (NIST) having more than 62,000 patterns. Spectrum of the unknown component was compared with the spectrum of known components stored in the NIST Library. The name, molecular weight, molecular formula and the structure of the components of Ampelocissus latifolia tuberous root were recorded.

RESULTS AND DISCUSSION:
The qualitative UV-VIS spectrum profile was selected for ethanol extract of Ampelocissus latifolia tuberous root powdered at a wavelength of 300 to 500 nm due to sharpness of the peak and proper baseline. The profile was shown peak at 409 nm, 424 nm and 479 nm with the absorption of 1.682, 1.704 and 1.479 respectively (Table 1).

The UV-VIS spectrum profile of ethanol extract of Ampelocissus latifolia tuberous root was shown in Fig. 1. 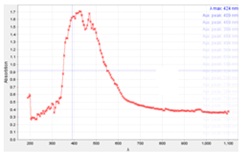 The FTIR spectrum was used to identify the functional group of different phytoconstituents based on the peak values in an infrared region of ethanol extract of Ampelocissus latifolia tuberous root powdered. The result of FTIR peak values were shown in Fig. 2. 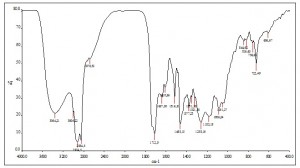 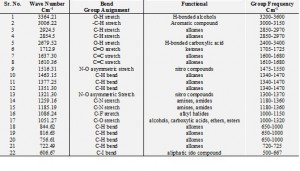 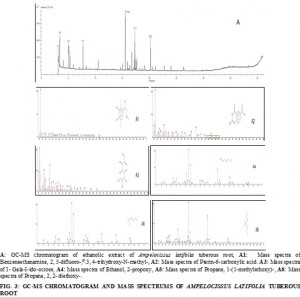 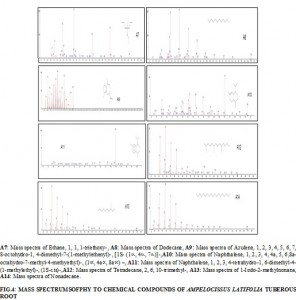 CONCLUSION: UV spectrophotometric analysis is a simple, rapid and accurate method for the determination of phytoconstituents present in crude drug powdered of medicinal plants. The FTIR spectral analysis has shown the presence of characteristic functional groups in ethanol extracts of Ampelocissus latifolia plants. GC-MS analysis has revealed the presence of different active compounds of important medicinal value against various ailments in studied plants. Hence study revealed the isolation, characterization, purification and biological activity of specific active compounds are necessary for their further studies.

ACKNOWLEDGMENTS: We would like to thanks SAIF, IIT, Bombay, Powai, Mumbai, for providing the GC-MS facility. Authors are also thankful to SAIF, CIL, Panjab University, Chandigarh for providing FT-IR facilities and encouragement.