ABSTRACT: Eclipta prostrata is a perennial herb, distributed in the tropical and sub- tropical regions of the world. The phytochemical investigation was carried out to determine the possible bioactive components from the methanol extract of Eclipta prostrata leaves by Gas Chromatography and Mass Spectroscopy (GC-MS).100 grams of the powdered sample was subjected to the soxhlet extraction followed by rotary evaporator and investigated using Perkin – Elmer GC-MS while the mass spectra of the compounds found in the leaf extract was matched with the National Institute of Standards and Technology library. The GC-MS analysis revealed the presence of various compounds with peak area like 10-Octadeconic acid, methyl ester (43.85), c-Sitosterol (36.45%), Pentadecanic acid,14methyl,methyl ester (15.09%), Diethyl Phthalate (13.96%), Glycine, N[(3a,5a,12a]-3,12-dihydroxy 24-oxocholan-24-yl]- (13.82%), Ethanol,2-(9,12-octadecadienyloxy),(ZZ) (13.73%), Oleic acid, eicosyl ester (6.92%). Extracts and metabolites from this plant have been known to possess pharmacological properties. Bioactive constituents exhibit antimicrobial activity and reported to have a commendable sense of purpose

The medicinal plants are useful for healing as well as for curing of human diseases because of the presence of phytochemical constituents. Phytochemicals are naturally occurring in the medicinal plants, leaves, vegetables and roots that have defense mechanism and protect from various diseases  Botanical medicines or phytomedicines refer to the use of seeds, berries, leaves, bark, root or flowers of any plant for medicinal purposes by significant number of people 2.

Knowledge of the chemical constituents of plants is desirable because such information will be value for synthesis of complex chemical substances. Therefore, there is the need to look inwards to search for herbal medicinal plants with the aim of validating the ethno-medicinal use and subsequently the isolation and characterization of compounds which will be added to the potential list of drugs 3.

Eclipta prostrata. L is a medicinal herb, belonging to family Asteraceae which is widely distributed throughout Asia. It is common in marshy lands, hedges and roadsides 4. E. prostrata, an aromatic plant, contains rich volatile components, which might be responsible for the pharmacological properties 5. E. prostrata is traditionally used for blackening, promoting hair growth and strengthening the hair. It is used as anti venom against snake bite in China and Brazil. In India it is widely used as a cholagogue and deobstruent in hepatic enlargement 6.

GC-MS method can serve as an interesting tool for testing the amount of some active principles of herbs. It combines two analytical techniques to a single method of analyzing mixtures of chemical compounds. Gas chromatography separates the components of the mixture and mass spectroscopy analyzes each of the components separately 7. Methanolic solvent is used to procure the phytocomponents due to high polarity 8 (Molecules with permanent dipoles). Hence, the present study was aimed to carry out the identification of bioactive compounds from the methanol extract of Eclipta prostrata leaves by Gas chromatography and Mass spectroscopy (GC-MS).

The leaves of E .prostrata were collected during the month of December from the natural habitats of Thiruvalluvar district, Tamil nadu, India. The plant materials was identified and authenticated by Department of Botany, Ramakrishna Mission Vivekananda College, Chennai, India. The plant was washed with running tap water and finally washed with distilled water to remove the dirt and dried under shade for two weeks.

The dried leaf powder of E. prostrata (100gm) was extracted in soxhlet apparatus using methanol for 6 hours. The methanolic extracts were dried under reduced pressure using rotary evaporator to get the crude and were stored below 4ºC until further used. The extract contains polar components of the plant material, and 2 μl of the sample of the solutions was employed in GC-MS for analysis of different compounds.

GC-MS analysis of the methanol extract of Eclipta prostrata was performed using a Perkin–Elmer GC Clarus 500 system comprising an AOC-20i auto-sampler and a Gas Chromatograph interfaced to a Mass Spectrometer (GC-MS) equipped with a Elite-5MS (5% diphenyl/95% dimethyl poly siloxane) fused a capillary column (30 × 0.25 μm ID × 0.25 μm df). For GC-MS detection, an electron ionization system was operated in electron impact mode with ionization energy of 70 eV. Helium gas (99.999%) was used as a carrier gas at a constant flow rate of 1 ml/min, and an injection volume of 2 μl was employed (a split ratio of 10:1).

The injector temperature was maintained at 250 °C, the ion-source temperature was 200 °C, the oven temperature was programmed from 110 °C (isothermal for 2 min), with an increase of 10 °C/min to 200°C, then 5 °C/min to 280°C, ending with a 9 min isothermal at 280 °C. Mass spectra were taken at 70 eV; a scan interval of 0.5 s and fragments from 45 to 450 Da. The solvent delay was 0 to 2 min, and the total GC-MS running time was 36 min. The relative percentage amount of each component was calculated by comparing its average peak area to the total areas. . The mass-detector used in this analysis was Turbo-Mass Gold-Perkin-Elmer, and the software adopted to handle mass spectra and chromatograms was a Turbo-Mass ver-5.2.

TABLE 1: PHYTOCOMPONENTS IDENTIFIED IN THE METHANOLIC LEAF EXTRACT OF ECLIPTA PROSTRATA BY GC-MS 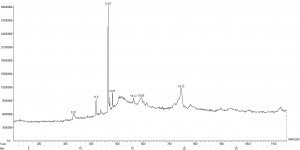 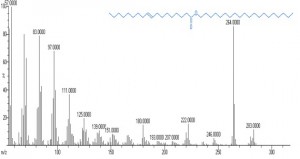 DISCUSSION: There is an increasing interest in the phytochemical compounds, which could be relevant to their nutritional incidence and their role in health and disease 9. In recent years, the interest for the study of the organic compounds from plants and their activity has increased. The aim of the present study was to develop a rapid method for the quantitative determination of organic compounds in plant and to confirm the phytochemicals present in the plant extracts. Diversity of medicinal plants and herbs containing various phytochemicals with biological activity can be of valuable therapeutic key 10.

The more precise in qualitative analysis can be obtained by gas chromatography coupled with mass spectrometry (GC-MS). For quantitative determination, gas chromatography with flame ionization detector (GC-FI) and GC-MS are preferred.

Dasyscyphin-C (saponins) a newer isolated compound from E. prostrata reported to have anticancer-cytotoxic activity 14. It was tested under in vitro conditions in HeLa (Human cervical carcinoma) & vero cell lines. At the concentration of 50g/ml it showed a good anticancer-cytotoxic activity on HeLa cells 15. A rat hepatic stellate cell line (HSCs) was used as in vitro assay system, the methanolic extract of aerial parts of Eclipta prostrata showed significant inhibitory activity on HSCs proliferation. It has been reported that the importance of free carboxylic acid at C-28 position in echinocystic acid derivatives from the methanolic extract Eclipta prostrata showed antifibrotic activity. Ethanolic and ethyl acetate fractions of Eclipta prostrata were tested for its antibacterial activities against Escherichia coli, Klebsiella pneumoniae, Shigella dysenteriae, Salmonella typhi, Pseudomonas aeruginosa, Bacillus subtilis, and Staphylococcus aureus 16.

Among the Phytocomponents, Diethyl Phthalate (DEP) is a diethyl ester of phthalic acid has been earlier reported that it is used as a solvent for fragrances, a surface lubricant in food and pharmaceutical packaging, and in tubing used for medical purposes. It is a colorless, oily liquid. Complexes derived from Diethyl Phthalate have antifungal activity against Aspergillus niger, Aspergillus flavus, Trichoderma harizanum, Trichoderma viridae and Rhizotonia solani 17.

CONCLUSION: The presence of various bioactive compounds justifies the use of the plant leaves for various ailments by traditional practitioners. The present study, which reveals the presence of components in Eclipta prostrata suggest that the contribution of these compounds on the pharmacological activity would be evaluated. The phytochemical analysis of the medicinal plants are also important and have commercial interest in both research institutes and pharmaceuticals companies for the manufacturing of the new drugs for treatment of various diseases.