INTRODUCTION:Plants have been an important source of medicines for thousands of years.  Everyday, the World Health Organization estimates that upto 80 percent of people still rely mainly on traditional remedies such as herbs for their medicines. Its civilization is very ancient and the country of a whole has long been known for its rich resources medicinal plants. Today, ayurvedic, homeo and unani physicians utilize numerous species of medicinal plants are possibly utilized as antiseptic and antimicrobial substances.

Wattakaka volubilis (Linn F.) Stapf (Family- Asclipidiaceae) is a large climber with green flowers in drooping umbels with smooth bank and ash coloured leaves rounded at the base.  It is found in India and South East Asia.  The root is applied to snake bites and given to women to cure head ache after child birth and the leaves are applied to boils and abscesses to promote suppuration.  It is an emetic, diphoretic and diuretic 2.  Traditional healers of Kerala used its leaves to treat inflammatory and painful conditions 3.  However, till date no scientific validation of these properties has been reported.

Here, the present study has been made to identify the Phytochemical compounds of W. volubilis by GC-MS analysis.

Preparation of Extracts: The plant leaves wereair dried and crushed to small piece using mortar and pestle and powdered in an electric grinder.  Dried and powdered plant material was extracted using soxhlet apparatus with ethanol as solvent (50-60oC) for 72 hrs.

The obtained extracts were evaporated in vacuum to give residues. A semi solid residual extract was obtained. It was stored at 4oC until used. When needed, the residual extract was dissolved in distilled water and used in the study. The extracts preparations were done as previously described by Allade and Irobi 4.

GC-MS Analysis: The GC-MS analysis of unknown compounds of W. volubilis deals with using a Clarus 500 Perkin Elmer Gas Chromatography ionizes compounds and measures their mass number equipped with Elite-5-Capillary Column (5% phenyl 95% dimethyl poly siloxane) (30 mm x 0.25 mm ID x 0.25 µmdf) and mass detector turbomass gold of the company which was operated at in EI mode.  Helium was carried the gas at the flow rate of 1 ml / min, the injector was operated at 280oC and the oven temperature was programmed as follows : 70oC @ 8 oC/min to 150oC (1 min) @ 8oC / min to 280oC (10 min). The identification of components was based on comparison of their mass spectra with those of Wiley and NBS Libraries and those described by Adams 5 as well as on comparison of their retention indices with literature 6.

RESULTS AND DISCUSSION: The present study carried out on the W. volubilis revealed the presence of medicinal active constituents.  In GC-MS analysis 32 bioactive phytochemical components were identified in the ethanolic extract of W. volubilis. The identification of phytochemical compounds is based on the peak area, molecular weight and molecular formula. Diethyl phthalate (C12H14O4) with RT 16.55 has peak area 37.31, 2-pentanone, 3, 3, 4, 4-tetramethyl (C9H18O) with RT 14.93 has peak area 17.58 and propane 1, 1, 3-trimethoxy (C9H20O3) with RT 6.84 has peak area 10.20, the results were presented in table 1, figure 1.

TABLE: CONSTITIENTS AND PERCENTAGE COMPOSITION OF  THE ETHANOLIC LEAF EXTRACT OF W.VOLUBILIS 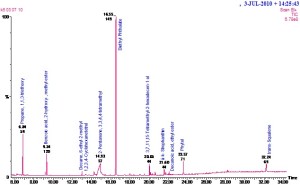 Investigated fourteen aromatic and 24 aliphatic acids were determined by GC-MS analysis of acidic fractions obtained from Paronia peregrine and Paeonia tenifolia roots. Benzoic acid and its monohydroxy-dihydroxy and tri-hydroxy derivatives are the main acid components of both Paronia species.  Some fractions could serve as a source of benzoic 4-hydroxy benzoic, vanillic and gallic acids as well as of ethyl gallate 8.

CONCLUSION: This study revealed the presence of 32 phytochemical compounds. The identification of the compounds W. volubilis could be exploited for new potent antidiabetic agents.

ACKNOWLEDGEMENT: The authors are thankful to the Centre for Advanced Research in Indian System of Medicine (CARISM), Sastra University, Thanjavur, for offering facilities to carryout this study.