Categories Menu
Home » PHYTOCHEMICAL AND GC-MS ANALYSIS OF OLEORESIN OF DIPTEROCARPUS GRACILIS BLUME: AS A BASIC CONSIDERATION FOR HUMAN REMEDY

PHYTOCHEMICAL AND GC-MS ANALYSIS OF OLEORESIN OF DIPTEROCARPUS GRACILIS BLUME: AS A BASIC CONSIDERATION FOR HUMAN REMEDY

PHYTOCHEMICAL AND GC-MS ANALYSIS OF OLEORESIN OF DIPTEROCARPUS GRACILIS BLUME: AS A BASIC CONSIDERATION FOR HUMAN REMEDY

INTRODUCTION: Dipterocarp is the most important tribe dominates tropical lowland forest area in Kalimantan, Indonesia consisting of several genera which have great utilizing for a human being. One important species can be utilized Dipterocarpus gracilis Blume of Dipterocarpus genus.

D. gracilis Blume is one of 23 species in Dipterocarpus genus which is included in the red list as a rare and endangered tree species 1. Besides producing commercially valuable timber, this species also produces Oleoresin which is one of Non-Timber Forest Products (NTFPs) that has high economic value in the market. Oleoresin is a liquid resin, good odor, sticky and oily.

Further, Oleoresin also used as room varnish and medicinal materials such as disinfectants, laxative, diuretic, light stimulant, and analgesic liniments. In Ratanakiri province, Cambodia was determined that there are two kinds of oleoresin tapping of Dipterocarpus spp. i.e., individual tapping and communal tapping 3. Combustion effects of stimulating oleoresin discharge in communal tapping are more controlled than individual tapping. In Indonesia, Oleoresin tapping has been conducted in ​​Sumatra. However, Oleoresin is used as mixed solution material of patchouli oil, thereby reducing the quality of Indonesian patchouli oil industries 4. Therefore, to support the conservation program of Dipterocarpus and also provide an alternative product diversification, it is necessary to research specific characteristics of its oleoresin. Thus, this study aims to determine specific characteristics of oleoresin origin of D. gracilis Blume as an establishing basis for appropriate product diversification of herbal remedy for human health interest.

Tapping Oleoresin: In this research, activity was conducted by identification and recording of 3 trees of D. gracilis Blume along with the explored location. D. gracilis Blume trees recorded at least 40 cm dbh. The tapping procedure is as follows:

2. Oleoresin flowed into the bottle using a hose. Harvesting and renewal of tapping hole done once every 4 days as much as 3 times. 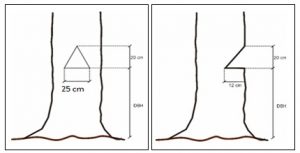 Phytochemical Test: Extracts were tested for the presence of active principles such as flavonoids, saponins, steroids, tannins, terpenoids, alkaloids, and carbohydrate by using some following standard procedures 5, 6.

Flavonoids Determination: About 1 ml of ethanolic extract was shaken with 1 ml of dilute ammonia solution. The layers were allowed to separate, and the yellow color in the ammonical layer (bottom layer) indicates the presence of flavonoids.

Saponins Determination: 5 ml of the filtrate was diluted with 20 ml of water and shaken vigorously (15 min). A stable froth (foam) upon standing indicates the presence of saponins.

Steroids Determination: 1 ml of ethanolic extract of each sample is boiled with 10 ml chloroform, cooled, 1 to 2 drops of concentrated sulfuric acid were added slowly through the wall of the tube. Shake well and allow standing for some time, red color appears at the lower layer indicates the presence of Steroids.

Triterpenoid Determination: 1 ml of ethanolic extract of each sample is boiled with 10 ml chloroform, cooled 1 to 2 drops of concentrated sulfuric acid were added slowly through the wall of the tube. Shake well and allow standing for some time, reddish purple color appears at the lower layer indicates the presence of triterpenoids.

Carbohydrate Determination: Extract hydrolyzed with HCl in the water heater. Then, it was added with 1 ml of pyridine and a few drops of a solution of sodium nitroprusside into the hydrolyzate, after it was etched with an alkaline solution of sodium hydroxide. The formation of a pink to red color indicates the presence of glycosides.

Antioxidant Assay: In this test used 100% of 5 concentrated sample with 50, 100, 200, and 400 times of dilution, respectively. 1mg of vitamin C was weighed, then dissolved in 5000 μl of distilled water and regarded as a positive control. Negative control was used in its solvent (distilled water). 100 μl sample was mixed in the cuvette with 400 μl of distilled water was added, and 500 μl of 2,2-diphenyl- 1- picrylhydrazyl (DPPH) radical scavenging activity. Mixing was stopped when the sample volume has reached 1000 μl (1 ml). Samples were incubated for 20 min in indoor with minimum light. Antioxidant Activity (AA) was determined by decolorization of DPPH with a wavelength of 518 nm using a spectrophotometer 7. The scavenging activity was calculated as a percentage of DPPH decoloration relative to a negative control using the following equation 8:

Helium was used as a carrier gas is 50-500 atomic mass unit (amu). The identification of the compounds and structure determination were based on the comparison of mass spectra and their fragmentation profiles using published data, Wiley, NIST library search.

RESULTS: Based on tapped resin or oil yield obtained in solid form rather clumped, milky white color. Harvested by using a tablespoon every three days, then put in a plastic bag, and it was obtained 358.91 ml Table 1. Further, 100 ml oleoresin was diluted in 100 ml 95% ethanol and then filtered. The results of this filter were tested phytochemicals, antioxidant, and GC-MS analysis.

TABLE 1: THE YIELD OF OLEORESIN TAPPED ON DIPTEROCARPUS GRACILIS

Note: All the value expressed in the table is the mean of three replication. (+: detected, -: not detected)

Note: All value expressed in the table is mean of three replication

DISCUSSION: Phytochemical test of D. gracilis Blume oleoresin soluble ethanol 95% contained alkaloid and triterpenoid. Alkaloid extracts also displayed as well as the anti-bacterial and anti-fungal activities 10. While triterpenoids are widely distributed throughout the vegetable kingdom and are the major components of many medicinal plants from Asia.

As an active component in the plants, triterpenoids have to contribute to the production of several biological and pharmacological effects such as anti-inflammatory, anti-cancer, anti-diabetic, and hepatoprotective effects 11. Further, mainly of Oleoresin from Dipterocarpus family contained sesquiterpene, triterpenoids and coumarin derivatives 12.

Another chemical compound identified was Cyclohexanepropanal, 2, 2-dimethyl-6-methylene- (7.87%) belongs to serissaserissoides essential oil which serves as a raw material of active drug 22.

Moreover, it was identified 2, 6, 10, 14, 18, 22-Tetracosahexaene, 2, 6, 10, 15, 19, 23-hexamethyl compound (6.98%). These compounds belong to triterpenoids with a straight chain and act as antioxidant, anticancer, pesticide, sunscreen, perfumery, chemopreventive 23, antimicrobial and anti-inflammatory 24, immunostimulant and lipoxygenase-inhibitors 25. This study provided 2.97% of 4-Pregnen-21-ol-3, 20-dione glucoside compound. Pregnen compound belong to the steroid group 26. Steroids are commonly used for anti-inflammatory and increasing autoimmune 27. 4-Pregnen-21-ol-3, 20-dione is the main member of a group of hormonal steroids called progestins that are responsible mainly for the maintenance of pregnancy in mammalians 28.

The phthalazine derivatives were identified as 2.82% of 1, 4-Methanophthalazine, 1, 4, 4a, 7, 8, 8a-hexahydro-9, 9-dimethyl-, (1α, 4α, 4a α, 8a α) compound. Like the other members of the isomeric benzothiazine series, have been widely applied as therapeutic agents due to their anticonvulsant, cardiotonic, vasorelaxant and anti-inflammatory properties 29. Copaene compound (2.74%) is similar to one component in Euphorbia macrorrhiza oil which serves as an anti-microorganism and anti-tumor 30.

CONCLUSION: Dipterocarpus gracilis Blume is Dipterocarpaceae species that potential ability for producing oleoresin with general characteristics such as white milk colored that clumps or crystallize, sticky and good odor. This applied oleoresin tapping technique was introduced by making snag as well as tapping process with simple tools. Oleoresin yielded of Dipterocarpus gracilis Blume in this study was contained alkaloid and triterpenoid which are bioactive components revealed significant activities such as anti-bacterial, anti-fungal activities, anti-inflammatory, anti-cancer, anti-diabetic, and hepatoprotective effects have antioxidant as a part of their activities.

In the current study, Dipterocarpus gracilis Blume had low antioxidant activity in 95% ethanol soluble, even better than other antioxidant sources. Furthermore, some important chemical compounds of GC-MS analysis determined that Oleoresin of Dipterocarpus gracilis Blume had an effective anti-arthritic agent, anti-inflammatory, anti-cancer, antimicrobial, anti-bacterial as well as contain vitamin D which will affect the health of the human liver. As mentioned in the above studies, oleoresin could be considered a good alternative for human remedy.

ACKNOWLEDGEMENT: We express our sincere gratitude to Mr. Amiril Saridan (taxonomist) for his contributions this paper candidly, explicitly and intellectually.

CONFLICT OF INTEREST: Authors would like to declare that they have no conflicts of interest.

A. Fernandes * and R. Maharani