Calotropis procera (Asclepiadaceae) is an erect, perennial shrub luxuriantly thriving in wastelands. It is commonly distributed in most parts of India and also distributed in Persia, tropical Africa and other tropical countries of the World. The aqueous extract of some parts have laxative property and beneficial in skin diseases, ulcers, enlargement of the spleen, abdominal glands, liver diseases, promotes digestive power and also useful in colics. The milky exudate is useful in skin diseases, tumour and ascitis. It is a very good purgative. Here an attempt has been taken to evaluate the antioxidant activity, CNS depressant activity and also antimicrobial activity of methanolic extract of fresh flowers of C. procera. In result, the methanolic flower extract showed a significant activity against DPPH free radicals and the IC50 value is 64.87µg/ml. On the other hand, CNS depressant activity of the extract was also observed by using In Vivo model. In antimicrobial activity five different fungal species were inhibited by this extract and from the above study the flowers extract showed the maximum zone of inhibition against Candida parapsiliasis and the minimum against P. notatum ATCC 11625. Simultaneously, four different bacteria were inhibited in the concentration of 1mg/ml up to 4mg/ml flower extract of C. procera showing significant zone of inhibition against those.

INTRODUCTION: Calotropis procera (Asclepiadaceae) is an erect, perennial shrub luxuriantly thriving in wastelands. It is a hardy branched, large sized erect, profusely milky shrub. Commonly it is distributed in Western and Central India from Punjab to Bihar and Bombay. It is also distributed in Persia, tropical Africa 1. All the parts, viz, root, stem, leaf and flowers of Calotropis procera (Fig. 1) are in common use in indigenous systems of medicine. 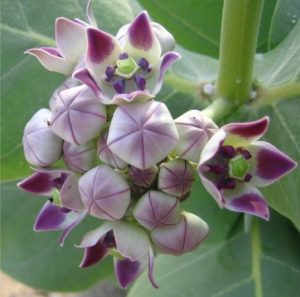 The crude extract is hot, bitter, pungent and laxative and is beneficial in skin diseases, ulcers, enlargement of the spleen, abdominal glands, liver diseases, promotes digestive power and also useful in colics. The milky exudate is bitter, hot, demulcent and is useful in skin diseases, tumour and ascitis. It is a very good purgative.
The root bark is considered as a valuable remedy in skin diseases, enlargement of abdominal viscera, intestinal worms, cough, ascites etc. The milky juice is regarded as a drastic purgative and is used in combination with the juice of the Euphorbia nerifolia. The root bark in the form of paste with rice vinegar is applied to elephantiasis of the legs and scrotum. It also acts as an emetic in doses of 30 to 60 g and has been used as a substitute for ipecacuanha 2-9.

Here an attempt has been made to evaluate the antioxidant activity, CNS depressant activity and also antimicrobial activity by using methanolic extract of fresh flowers of C. procera.

MATERIALS AND METHODS: The fresh flowers of Calotropis procera Linn. were collected from the plants present in forest (WB FOREST DEPARTMENT) at Durgapur in the morning between 7.30 to 9 a.m. during the month of October 2009. The herbarium of C. procera was authenticated by director of Botanical Survey of India (Shibpur, Howrah). The reference number is CHN/I-I/55/209/Tech.II/157 dated 05-02-2010.

Extraction: About 150 gm of fresh flowers was taken and washed under running tap water. It was then cut into small pieces by using a sharp knife. The fresh flowers were then allowed to soak for about 36 hour in Methanol (Maceration). Then it was poured into homogenizer for 10 minutes. Then the methanolic extract was filtered out and the filtrate was taken for further study. Different qualitative chemical tests and chromatographic study revealed that one single flavonoid molecule is present in the methanolic extract of C. procera and the Rf value of that flavonoid is 0.76 (Mean value).

Isolation of Flavonoid: The crude flavonoid was isolated by column chromatography using Butanol : Acetic acid : Water ( 4 : 1 : 5) as mobile phase. After collecting the fractions, the presence of flavonoid was identified by UV Spectrophotometer, FT-IR and NMR analysis. In UV, elutes showed peaks at 280, 320 and 338 nm wavelength. Generally flavonoids show two characteristic bands in the region 240 to 280 nm and 300 to 340 nm. As the column isolated compound shows peaks in the region of Band 1 and Band 2, so, it might be predicted that the compound is of flavonoid type. In FT-IR of the column isolated sample, peaks, profile was obtained, among which, some of the major peaks have been identified like 3387.77 cm-1 (O-H stretching), 1565.91 cm-1 indicating the presence of -C=C for aromatic ring, 1419.55 cm-1 indicating to the presence of –C-H in plane bending and 1062.08 cm-1 denoting the presence of –C-O stretching of –O-H. Similarly in NMR some of the major peaks have been identified like the peaks around 4.9538-5.1253 indicating the presence of -CH=CH, The peaks around 3.4917 show the presence of CHOH and the peaks around 2.080 show the presence of HC-O-C. From spectral analysis we also observed that the eluted sample from the column was not 100% pure and on the basis of the above results we assumed that, this might be a flavonol type of derivative.

Antioxidant Activity 10-12: The stable 1, 1 diphenyl-2-picryl hydrazyl (DPPH) was used for in vitro determination of free radical scavenging activity of the extracts. The scavenging of free radicals by extract was evaluated spectrophotometrically at 517 nm against the absorbance of DPPH radicals. The free radical scavenging capacity of the methanolic extracts of C. procera was deter-mined using DPPH. DPPH solution (0.004% w/v) was prepared in 95% methanol. Methanol extract of C. procera was mixed with 95% methanol to prepare the stock solution (10 mg/100mL).The concentration of this C.  procera methanolic extracts solution was 10 mg /100 ml or 100µg/ml. From stock solution 2ml, 4ml, 6ml, 8ml & 10ml of  this solution were taken in five test tubes & by serial dilution with same solvent was made the final volume of each test tube up to 10 ml whose concentration were then 20 µg /ml, 40 µg /ml, 60 µg /ml, 80 µg /ml & 100 µg /ml respectively.

Freshly prepared DPPH solution (0.004% w/v) was added in each of these test tubes containing C. procera methanolic extracts (20 µg/ml, 40µg/ml, 60µg/ml, 80µg/ml, 100µg/ml) and after 10 min, the absorbance was taken at 517 nm using a Spectrophotometer. Ascorbic acid was also used as a reference standard and dissolved in distilled water to make the stock solution with the same concentration (10 mg/100mL) of methanolic extracts of C. procera. Control sample was prepared containing the same volume without any extract and reference ascorbic acid in 95% methanol was used as blank.

The percentage discoloration was calculated as follows:

The degree of discoloration indicates the free radical scavenging efficiency of the substances. Ascorbic acid was used as the free radical scavenger reference compound. The absorbance measurements were recorded on UV-VIS Spectrophotometer. From the figure and table, it has been concluded that the sample of C.  procera flower extract showed the antioxidant property and its IC50 value as calculated from the graph is found to be 64.87 µg/ml.

Acute Toxicity Study:  The LD50 dose of the flower extract from Calotropis procera on mice is found to be 1660mg/kg. All experiments involving animals comply with the ethical standards of animal handling and approved by Institutional Animal Ethics Committee (Regd. No.:- 955/a/06/CPCSEA).

CNS Depressant Study 13: In this experiment animals used were kept in 18 hrs fasting condition which was then divided into five groups according to the dose, each containing 6 animals. The animals were weighed and doses were calculated. Then firstly the animals were placed on the instrument and the responses were recorded. After this they were treated with the standard drug (Diazepam, 1.5mg/kg body weight i.p.), and finally with flower extracts in above mentioned doses. After the treatment the animals were kept still for 30 min allowing the intra peritoneally administered drug to reach the CNS. After 30 min, the animals were placed in the actophotometer for 10 min and the readings were collected. From this preliminary study, it was observed that the extract did posses significant CNS activity.

Antimicrobial Study 14-15: The bacteria and fungus, which are used in the work, were brought from Jadavpur University microbiology laboratory and National Institute of Cholera and Epidemic Disease (NICED), Kolkata.

Cylinder plate method for determination of Zone of inhibition: The sterile melted medium was poured at 40-50°C in sterile petridishes to get a thickness of 3-4mm. It is ensured that the layers of medium are uniform in thickness by placing the dishes on a level surface. Then the fungal broth was spreaded on the solid media surface uniformly and pipetted out extra broth by Pasteur pipette. The previously sterilized cylinders were placed into the plates and waited for a while to being static. Then the 100 μl of the extracted sample along with the standard drug ‘fluconazole’ were incorporated into the cylinder. The whole work was done in front of the laminar air flow maintaining all the sterile conditions. The loaded plates were incubated at 25°C for 24hrs onto the incubator. Zone of inhibition were then calculated. From the table it can be said that 5 out of 10 fungi were inhibited in the concentration of 2mg/ml of flower extract of C. procera. From the study we could conclude that the flowers extract showed the maximum zone of inhibition against Candida parapsiliasis and the minimum against P.notatum ATCC 11625.

RESULT AND DISCUSSION: The present study of phytochemical screening of a methanolic flower extract of C. procera proved the presence of a flavonoid molecule of flavonol class. Its Rf value was found out to be of 0.76 (single spot) which is also significant. It also showed (Table 1 and Fig. 2- 3) very promising free radical scavenging activity so called antioxidant activity, which is one significant finding. 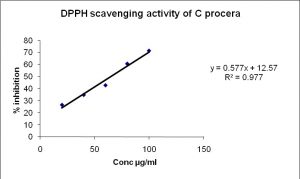 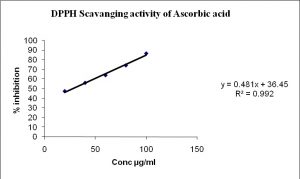 From the pharmacological investigation part it was observed to possess CNS depressant activity on mice (Table 2-3) and LD50 of the flower extract was found to be of around 1660 mg/kg (mice) - a more or less satisfactory index.

Finally the extract also exhibited significant activity against some bacterial and fungal strains (Table 4-5). Besides all these, the dried extracted powder is a beautifully colored pigment (pink- magenta color) having some desirable pharmaceutical property of practical utility. Starch powder adsorbed the color from aqueous solution, which was retained by starch even after repeated washing and drying.

It may, thus, be concluded that this extracted material possessing the stated desirable properties might have wide implications in food and drug industry as one protective naturally occurring coloring agent. Of course, a more systematic and in-dept study could only establish our claim more emphatically.